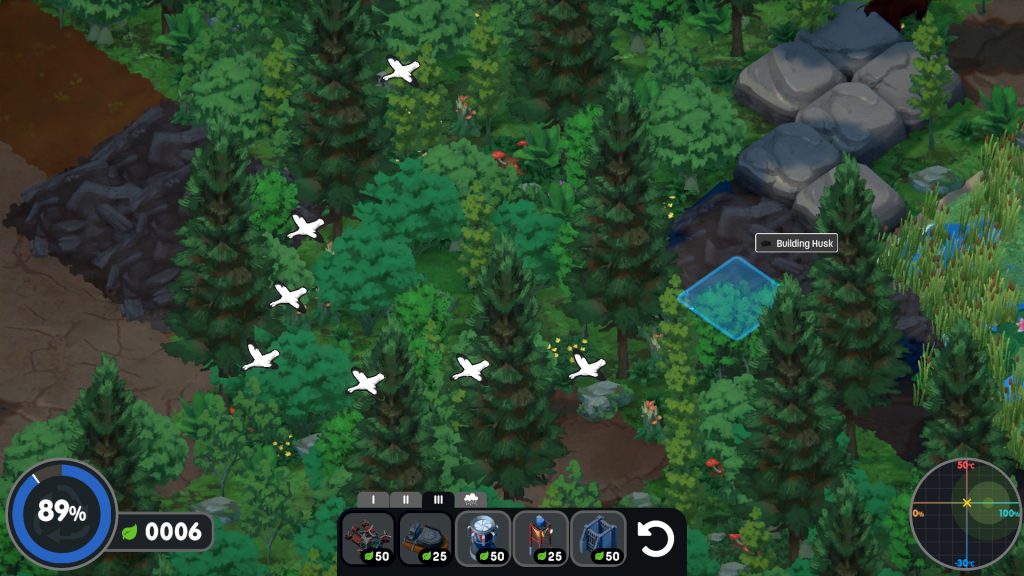 There’s a powerful moment at the thrilling climax of The Dark Knight where Lucius Fox watches the extremely invasive technology, SONAR, dramatically self-destruct. At the time, SONAR was a necessary tool that would be critical in assisting Batman locate The Joker; after their intense showdown, the technology was no longer required. Having done its job, it was destroyed by its maker (by way of Fox) with almost no witnesses to acknowledge its existence. Eventually, Fox left the battered room smiling, knowing that removing this technology was the best course of action for the world’s future.

That bemused surprise on Fox’s face after that surprising chain of events immediately popped into my mind while playing Terra Nil, a game about building up enough infrastructure to repopulate a barren wasteland with flora and fauna — only to meticulously remove said infrastructure after the job was done. 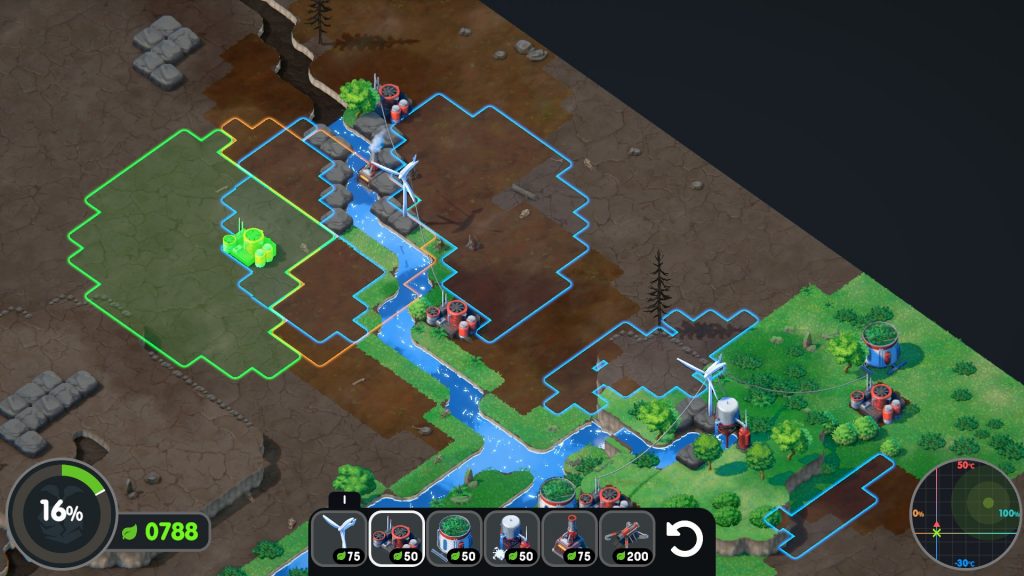 Terra Nil, currently in development by Free Lives with publishing being handled by Devolver Digital, is unlike any game out there while simultaneously related to quite a few that have attempted similar themes or mechanics. It’s as if Islanders and Cloud Gardens were blended together — taking the gameplay of the former and concept of the latter — with a little Birthdays the Beginning thrown in for good measure. To quickly sum, it’s all about strategizing how to take a wasteland diorama and bring it to life by carefully placing specific facilities within set parameters. Simple, right?

Easier said than done; like Islanders, Terra Nil asks players to place key facilities in specific spots on the little patch of land. Each facility costs a bit of green, which can be earned back by another type of facility — as long as the conditions for its placement have been met. It’s a careful balancing game of buying certain facilities to pave the way for others that will earn you back those spent leaves (and hopefully some extra). 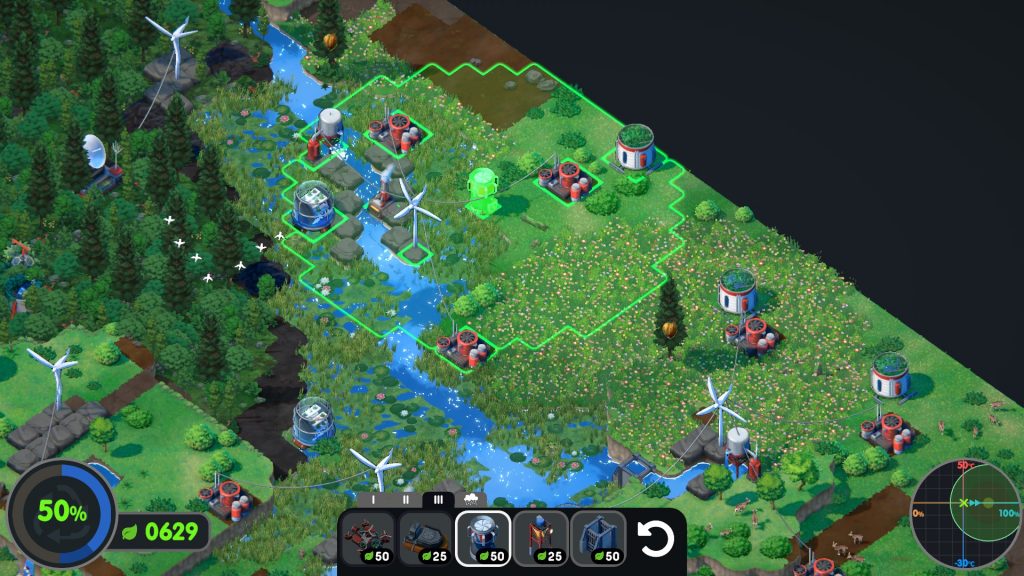 After earning the required amount of green, it’s time to diversify that eco-portfolio by creating three different biomes. By further altering the land to foster marshland, forests, and flowering fields, the various biomes are quickly yet quietly populated by birds, bees, and even bears. Fish begin swimming in the streams. Deer begin grazing in the grasslands. Frogs croak on lilly pads as geese fly overhead in a V formation. Nature is healing.

Then, just as you’ve spent what feels like hours carefully placing each facility in a position for optimal growth, Terra Nil asks players to remove it all. 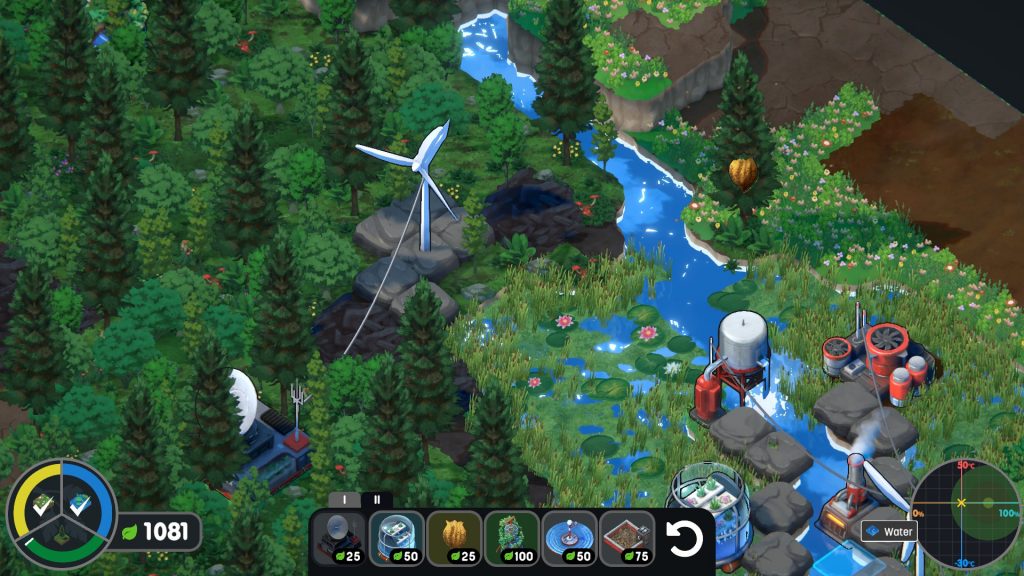 At first, I didn’t totally grasp what I was being asked. Surely, Terra Nil was giving me the option to remove facilities that were accidentally or inefficiently placed — this had to be optional, right? But no, the goal was outlined clearly in the bottom left corner: I needed to recycle all the infrastructure I’d placed on gamer’s green Earth thus far. Not even the old adage of “taking only pictures and leaving only footprints” applied to this little patch of nature, as even my carbon footprint needed to be removed.

It was a thoughtful, new way to approach city-building (if you could call it that), and it was exhilarating.

Those interested in checking out the “name your price” version on itch.io for prototype gameplay can do so here; otherwise, be sure to wishlist Terra Nil on Steam today.