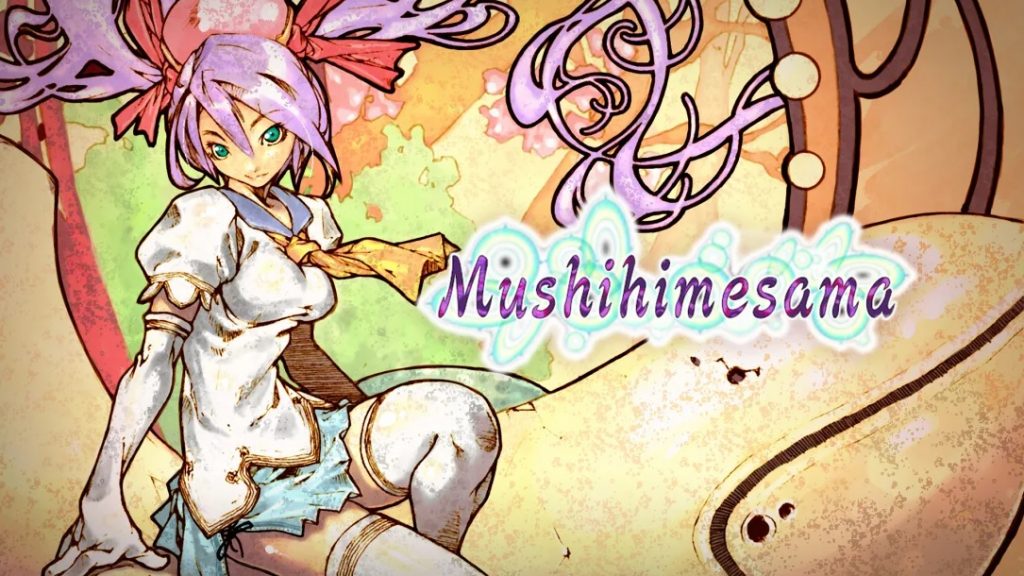 When it comes to Japanese developer Cave’s stable of bullet hell shooters, Mushihimesama is about as good as it gets. It has everything the studio is known for: brilliant bullet patterns, breathtaking visuals, and pumping melodies that fit the action like a well-worn glove. During last week’s E3, the game made a surprise appearance on the Switch eShop. And as a big fan of the developer’s previous entries like Dodonpachi, Espgaluda, and Ketsui, you better believe I was excited to experience this celebrated release on Nintendo’s hybrid console.

First released in arcades in 2004, Mushimesama is a vertically-scrolling shooter set in a vibrant fantasy world. You control Reco, a young princess who pilots a golden beetle to battle menacing bugs known as Koju, who threaten to eradicate humankind. Reco’s journey takes her through various landscapes, like lush forests, arid deserts, and volcanic mountains, as she fights her way to the King of the Koju.

Of course, this is a shoot ’em up we’re talking about. And, as such, the story is secondary to white-knuckle action. 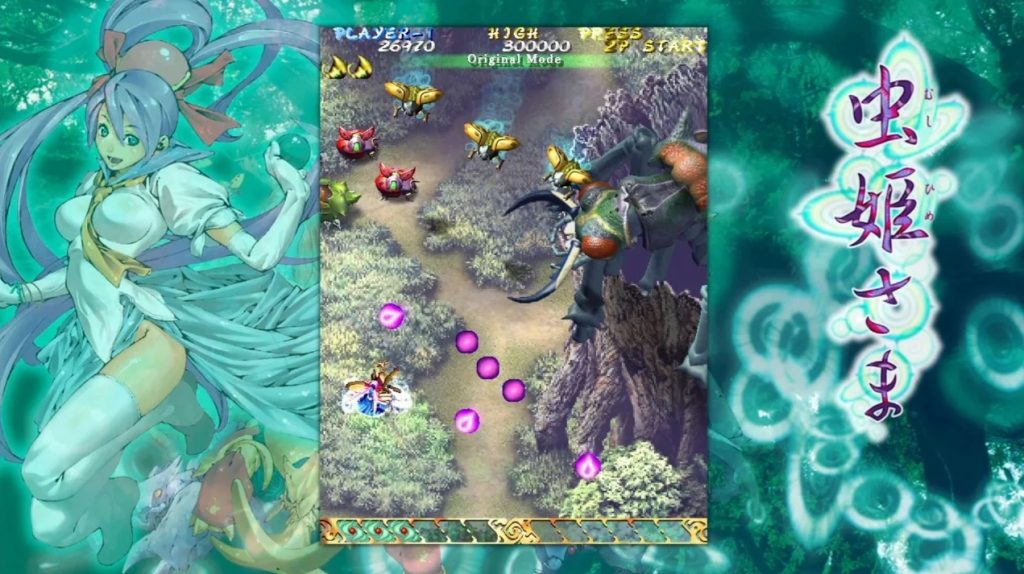 Thankfully there’s no shortage of shooty goodness bundled into this package. This release includes pixel-perfect ports of all the game’s various iterations. You can choose from three modes from the main screen: Normal, Arrange, and Mushimesama Ver. 1.5. As you’d expect, Normal is a 1;1 port of Cave’s iconic shooter. Which isn’t a bad thing, when you consider it’s one of the best around. Fly your Kiniro through 5 grueling stages, battle giant insects hell-bent on destruction, and weave your tiny hitbox through dense curtains of enemy fire. It’s a tried and true formula and one that Mushihimesama excels at on every front.

Arrange Mode offers some fun twists on the original formula. For starters, you’ll begin the game with your firepower maxed out, and you can swap between the game’s various weapon types on the fly. Additionally, if you’re hit while you have a bomb in your possession, you’ll automatically throw it, clearing the screen of bullets and effectively giving you another life. I really enjoyed Mushihimesama’s Arrange Mode. It shakes things up just enough to keep things interesting while adding a few extra tools to your disposal to help take the edge off just a little.

However, if you’re a Danmaku god with ice water flowing through your veins, then Ver 1.5 is the one for you.  Also known as Matsuri mode, this one’s quite a bit more ambitious as far as upgrades go. For starters, it includes three different difficulty modes to choose from: Original, Maniac, and Ultra, with the latter two hurling thousands of bullets at the player at any given time. With a revamped color palette to breathe new life into the visuals, new shot patterns, and a completely overhauled soundtrack, it’s easily the most robust of the bunch. 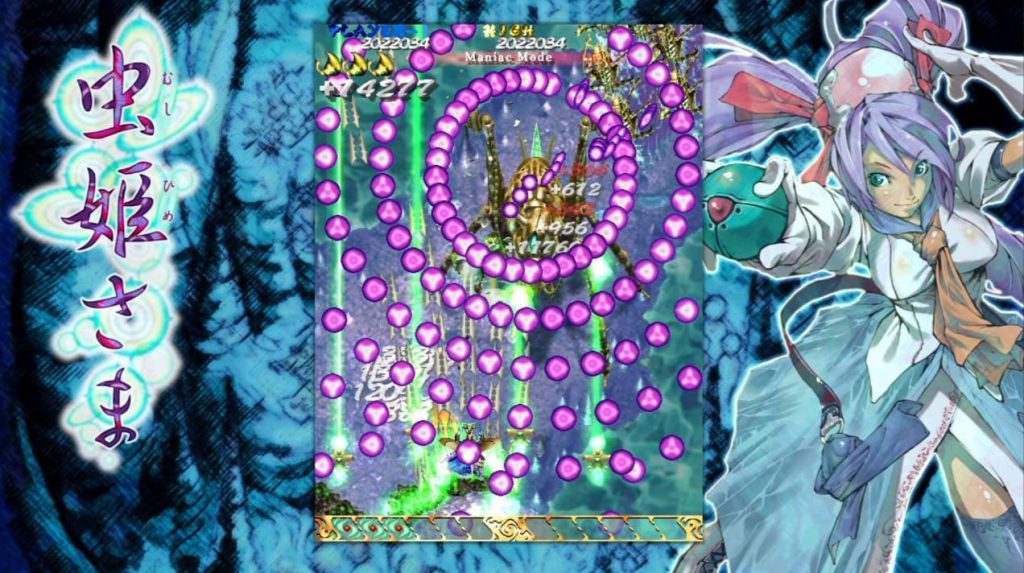 No matter which game mode you choose, you’re in for a treat. Mushihimesama‘s rock-solid mechanics are just as sound today as when the game was first released 17 years ago. Each stage is meticulously crafted as far as enemy placement, and bullet patterns go. And you’re bound to have a great time mastering each stage in pursuit of obtaining that glorious 1CC. And if the default difficulty is a bit much for you, you’re in luck. The Switch version of Mushihimesama also introduces a new Novice Mode. With fewer enemies and less demanding shot patterns, it’s the perfect way to get your feet wet and learn the ins and outs of the game’s mechanics.

I’d be remiss, not to mention how gorgeous this game is. Cave’s shooters have always had some spectacular artistic direction, but Mushihimesama takes the cake. Each stage is beautifully drawn and full of atmosphere that really pulls you in. Additionally, the studio’s signature pre-rendered sprites are lushly detailed and well animated. I especially loved the game’s third stage. It’s set above a gargantuan Koju covered in bullet-spewing orifices and appendages. Watching its giant frame shift and undulate as it charges beneath your beetle is truly a sight to behold and a testament to the studio’s unrivaled artistry when it comes to the shoot ’em up genre.

As good as Mushihimesama looks, it sounds even better. Composers Manabu Namiki and Masaharu Iwata pulled out all the stops to bring the game’s world to life through lush soundscapes. From the high-energy bullet ballad that kicks off the action to mysterious and somber melodies, there’s not a bad track in the bunch. Even after wrapping up this review, I’ll be listening to these tracks for months to come; They’re just that infectious.

When it comes to performance, Mushihimesama runs with nary a stutter. Even in handheld mode, the game is completely stutter-free, even when it seems like billions of bullets are blanketing the screen. However, I do have to say that the Switch’s small display can make maneuvering through curtains of enemy fire a bit challenging. But hey, maybe that’s just these old peepers of mine. Eagle-eyed players may not have the same problems I did when trying to following the action in handheld mode. But if your eyesight isn’t 20/20 and you’re thinking of picking this up on the Switch Lite, this may be worth considering.

As far as ports go, you’re not getting an awful lot of extra content here. There’s the requisite “tate mode” for purists who like to rotate their monitors to get the true vertical shooter experience. Additionally, those playing in widescreen are treated to a dozen gorgeously drawn wallpapers with customizable window options. Apart from that, you’re not getting a whole lot of extra features here. But when you consider how much gameplay is packed into the four available modes, it’s hard to argue you’re not getting your money’s worth.

So, should you add Mushihimesama to your Switch library? If you’re a fan of the shoot ’em up genre, I’d say it’s a no-brainer. It’s an exhilarating ride that will put your skills to the test. But you don’t have to be a shooter veteran to enjoy what the game has to offer. The Novice Mode dials back the challenge considerably and serves as a great tool for dipping your toe into what the Bullet Hell genre is all about. If you’re curious about Cave’s shoot ’em ups or are a veteran flyboy looking for a robust addition to your Switch library, don’t hesitate. Mushihimesama is a must-buy.

Well, what are you waiting for? Go bust some bugs!