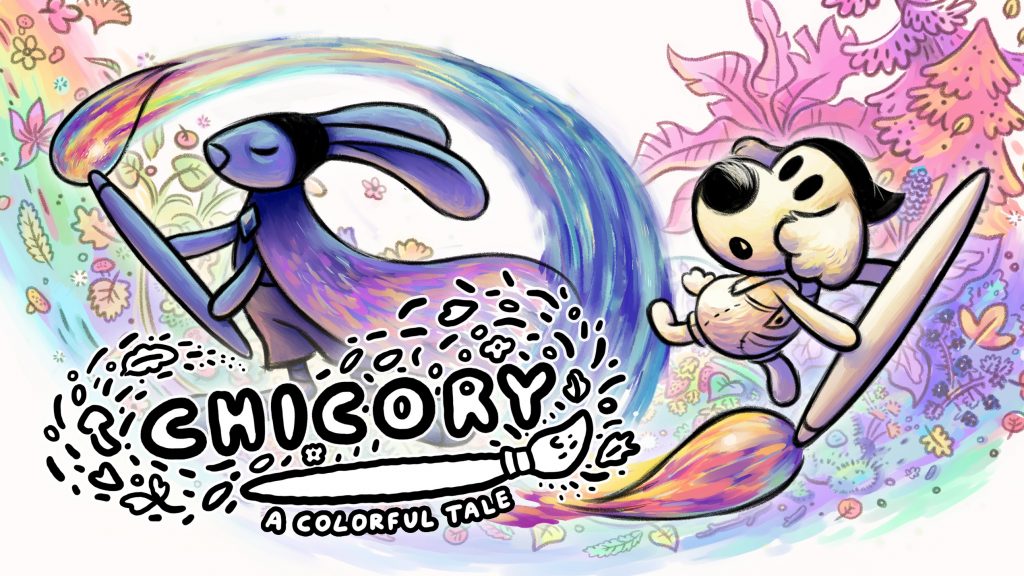 I like to say I’ve been writing about video games for nearly twenty years, and that is true. It leaves out the part, however, where I went about 8 years mostly away from doing so. It’s a period I talk about less, not only because it’s boring, but also because it was a fairly dark period.

The reason I stopped writing about gaming for so long isn’t that I stopped loving it. From the time I read my first issue of Electronic Gaming Monthly in December of 1998, I wanted to do this for a living. Instead, after nearly a decade of working toward my goal, I  decided I wasn’t going to get where I wanted to. I’d never make a living at it, so what was the point of continuing? That I loved what I was doing, that it was my passion, no longer mattered. I wasn’t good enough. I believed that, so I stopped.

That’s a lot more relevant to Chicory: A Colorful Tale than it might initially sound. In the latest game from a team lead by Greg Lobanov, maker of Wandersong, a lot of Chicory is spent dealing with artistic merit. Subjects like depression, jealousy, self-loathing, impostor syndrome, and not living up to what you expect of yourself and others expect of you all are explored deeply. If that doesn’t sound like a fun time, I get it. Somehow though, Chicory takes these subjects and creates one of the most charming, fun, and beautiful experiences in modern gaming.

A Tale In Color 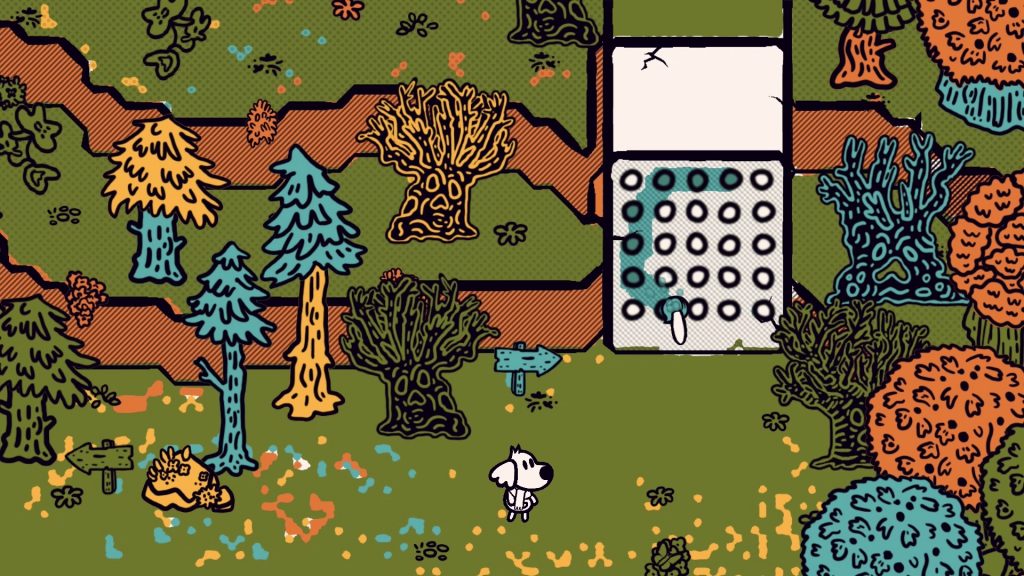 You play as a character named after your favorite food. At the start of Chicory: A Colorful Tale, you’re the janitor at the tower where the wielder lives. The wielder is the holder of a sacred paintbrush, the device that gives color to the world. Color slowly fades, and the brush is needed to replace it. Things kick off when you find the brush just laying around with no sign of Chicory, the current wielder, anywhere to be found.

Color vanishes from the entire land, leaving everything in black and white. Without needing much convincing, you take up the brush, convinced someone needs to bring color back.

With the brush, you’ll start coloring in this Zelda style overworld screen by screen. Every area has four colors you can choose from, and as the game goes on, you’ll gain more tools to both navigate it and color it.

Tell Your Own Tale 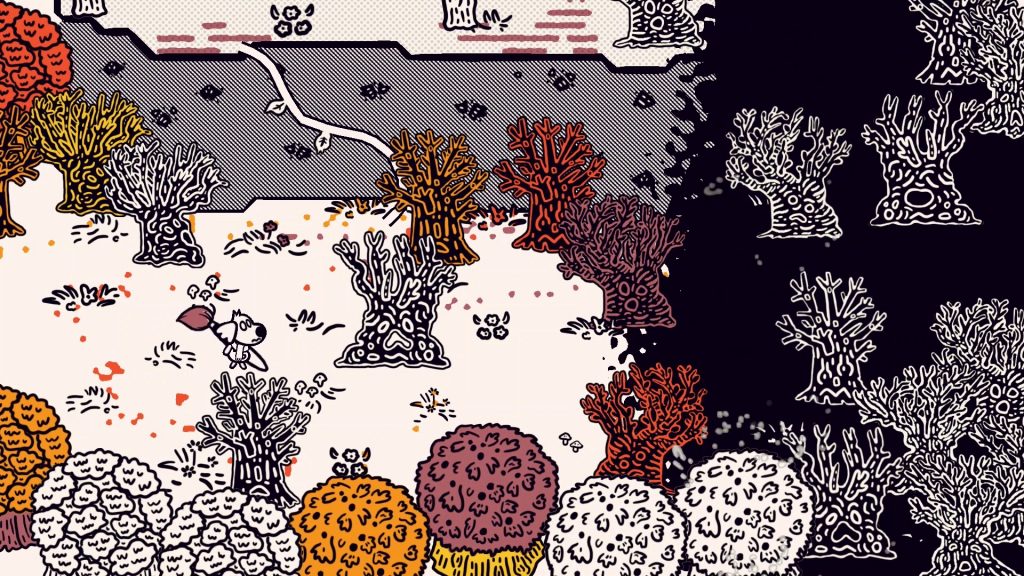 While you always have a goal, there’s plenty of freedom here. Plenty of side quests fill the world with optional content. I often spent time just standing around coloring an area in. It’s fun to bring life to the environments here. The paint mechanics are well crafted, and while they might feel a bit more precise on a PC with a mouse, the PS5 controller performs admirably. You can use the touchpad to color quickly, which works great. The entire mechanic opened up once I realized this was an option an hour or so into the game. You can also hold down on the color button in an area to start filling it in, which works great when you want clean lines.

Once you move on from just enjoying the core paint mechanic, you’ll find an expertly crafted adventure. There are no enemies throughout the main portion of the game. Navigating areas is all about solving puzzles. These will test players, making great use of the environment and your expanding brush options. Coloring certain things in and removing color at the right times are both important.

The Tale You Need 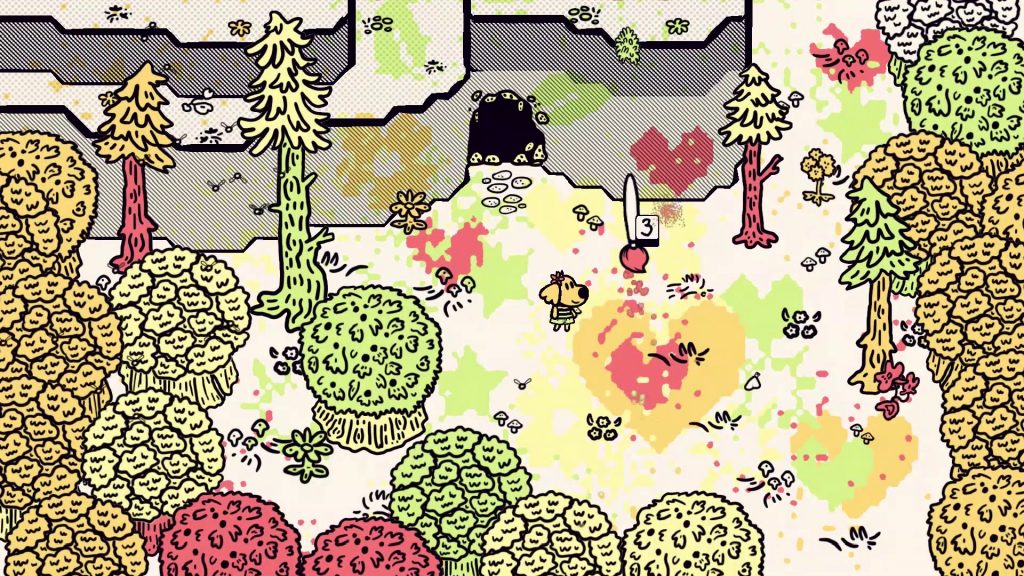 These puzzles can be tough at times, but I love how Chicory: A Colorful Tale is dedicated to allowing challenge but also clearly wants to make sure all players can see their way through its story. The themes of the game would fall flat if players couldn’t see them through. Phones dotted throughout the world allow you to call home to speak with your mom at any time. She’ll give you a hint about what to do next if you need it. If that doesn’t prove enough of a help, your dad is always eager to jump in and provide a more exact answer to what you need to do. That’s optional, though, only there if you want it. Chicory encourages exploration. It encourages you to be as stuck as you want to be.

The same is true of the game’s beautiful bosses. The only enemies you’ll face during Chicory, they are wildly inventive and visually stunning as the game’s color palette shifts into a battle of colors. These test an entirely different set of skills than the rest of the game does and are some of my favorite sequences in the game. Chicory seems to know this and gives you a wide selection of options, including even skipping them. I would strongly advise against doing that, as these are wonderful sequences. Instead, you can provide yourself more life or even turn off the ability to die or even take damage. These will let any player find an option that lets them see these through.

I’d be remiss if I didn’t mention the wonderful score by the incredibly talented Lena Raine. It perfectly sets the mood for a wide variety of scenes dealing with a wide-ranging set of emotions. The score is on Spotify, and I would highly recommend checking it out. Even outside of the game, it’s incredible work, but my favorite part is how fully it serves Chicory. It isn’t just great music; it’s the great music this game needs.

Part of growing up is hopefully learning that you aren’t always going to live up to what you wanted or what others wanted from you. This can be painful. It can even cause you to question who you are and why you do the things you do. If those things matter to you, however, don’t let them stop you.

Chicory: A Colorful Tale spoke to me deeply. I think most people who have pursued any creative outlet will find something to latch onto in its story. If that were the only strength here, you’d have a game worth your time. When you combine that with a beautiful art style, fantastic music, entertaining exploration, thought-provoking puzzles, and unique boss battles, you have a masterpiece. Coming out during the lead-up to E3, the same week that several other heavy hitters release, it would be easy for Chicory to get lost in the shuffle. Don’t let them happen. Few games releasing in 2021 will be more worthy of your time.

Full disclosure: This review is based on a copy of  Chicory: A Colorful Tale provided by the publisher. 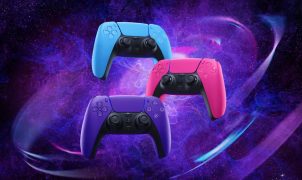