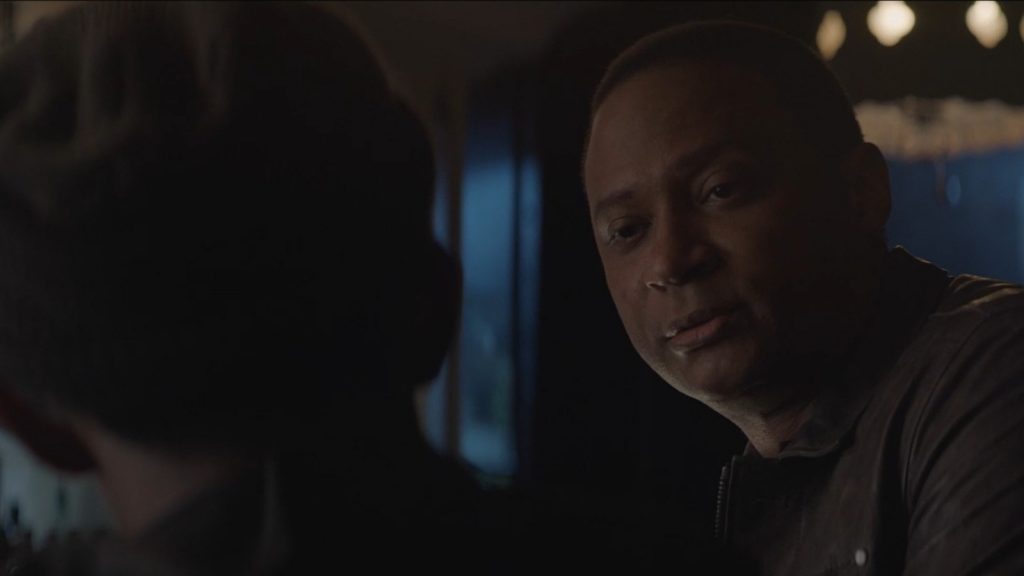 This was another pretty solid episode of Batwoman. Though it’s titled Rebirth, there’s a lot of meanings to that. And some of those meanings end better than others. Most of the episode was focused on the aftermath of Luke’s near death experience. But it also marks the return of a couple villains, and some dangerous quests.

The episode starts with a man anxiously getting into his car, right before a sword bursts through the hood. He’s attacked by a masked swordswoman, stabbed and his briefcase taken. Batwoman arrives and fights, but isn’t able to stop her escaping. When Batwoman calls Luke at the Bat Cave to call for medical assistance, she can’t reach him. Cause Luke is still fighting his own demons, and he’s not focused on helping the team at all. Instead, he has a much darker and more dangerous task this episode.

A big reason for Luke’s demeanor is that Tavaroff quickly gets off on bond, despite the horrible things he’s accused of. Luke decides to follow him to a card game at a police bar. It’s dumb and reckless, but Luke feels he’s let the Crows get away with too much. And since he’s full of anger and regret, he’s taking risks he normally wouldn’t. First he confronts Tavaroff, and then challenges him to a game of Hold’em. Lucky for him, he has a guardian angel in one John Diggle. As a fan of Arrow back in the day, I was really happy with this cameo, especially since he’s a fantastic actor.

Another reveal this week is the return of Safiyah. She’s the one that gave Sionis the info to take down Kate’s plane and transform her. She’s out to get revenge now, and it turns out the masked swordswoman is none other than her lackey, Tatiana. Apparently she’s after people on witness protection from the real Circe. But honestly, that thread of the story was the weakest. Even at the end, I wasn’t entirely sure what her goal was. Thankfully, it had one fun consequence – Black Mask and Safiyah team up. And it causes nothing but misery for the Bat Team.

One of the creepiest parts of the episode is when Roman is discussing how PR spun his “daughter’s” return. It culminates in a commercial for Janus’ new product line, called Rebirth. Circe / Kate is in a sexy commercial showing it off. Roman gloats about how his skin care will keep Kate from ever knowing who she really is. When Safiyah asks about her new face, he reveals it was thanks to Alice. It was really satisfying watching Safiyah tell Sionis off when she hears that, since she knows Alice’s connection to Kate. Sionis is dangerous, but he’s not all knowing. He truly had no idea that Alice was Beth Kane, but now he’s armed with that dangerous information.

Alice is Beth Kane, You Idiot 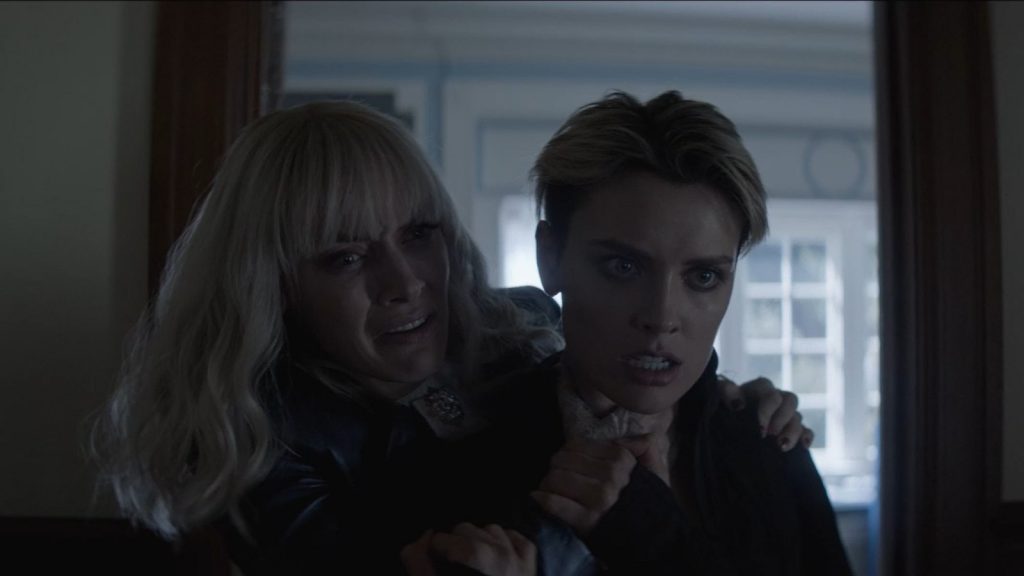 Speaking of the new Circe, she has a fun arc. She’s promptly kidnapped by the father daughter team of Alice and Jacob. They’re gonna do their best to restore her memories, but that’s a bumpy road. They prove her identity through DNA and Alice recounting what happened to the real Circe, but she fights it. Finally Alice has a breakthrough with an old handmade mug, which causes a shock of pain for Kate. She has a twisted memory of being trapped and saved by Beth. Though the details were wrong, she starts to remember her identity. Unfortunately for everyone, it’s not quite that easy.

There’s a delightfully awkward scene where Alice introduces Ocean to her father. Ocean wants to be accepted, and is an old fashioned sort. It’s clear their relationship is strong, especially in this episode. He even brings the items to jog Kate’s memory. And even Alice being Alice, it seems like things are finally on the right track. Which should have been my clue to get worried.

At the Bat Cave, Ryan and Mary find details on the second victim of Tatiana. He was a blind man in witness protection. He only was blind after the real Circe gouged out his eyes after he assaulted her. That’s how she wound up at Arkham. Again, I’m not entirely sure why Safiyah is after these people, especially since she’s aware who Circe really is. Regardless, Batwoman has a couple fun battles with Tatiana that don’t really go anywhere. One result of the information is Mary and Ryan starting to piece together Roman’s role in everything, and why Alice warned Mary about Circe last week.

Ryan needs Luke, and tracks him to the bar. She tries to ask for his help, and he reveals he didn’t want to wake up from his coma. Meanwhile, Jacob calls Mary and tells her Kate is alive, and that Black Mask is Sionis. She wants to rush to Crow HQ and help, but Jacob says not yet. Mary reveals Circe is connected to Safiyah right as False Face goons led by Tatiana take Jacob down. Alice tells her sister to run right before she’s overwhelmed, and taken to Safiyah. Luck is on the Bat Team’s side, and Batwoman runs across Kate, and offers her a ride in the Batmobile.

You Owe Me An Island 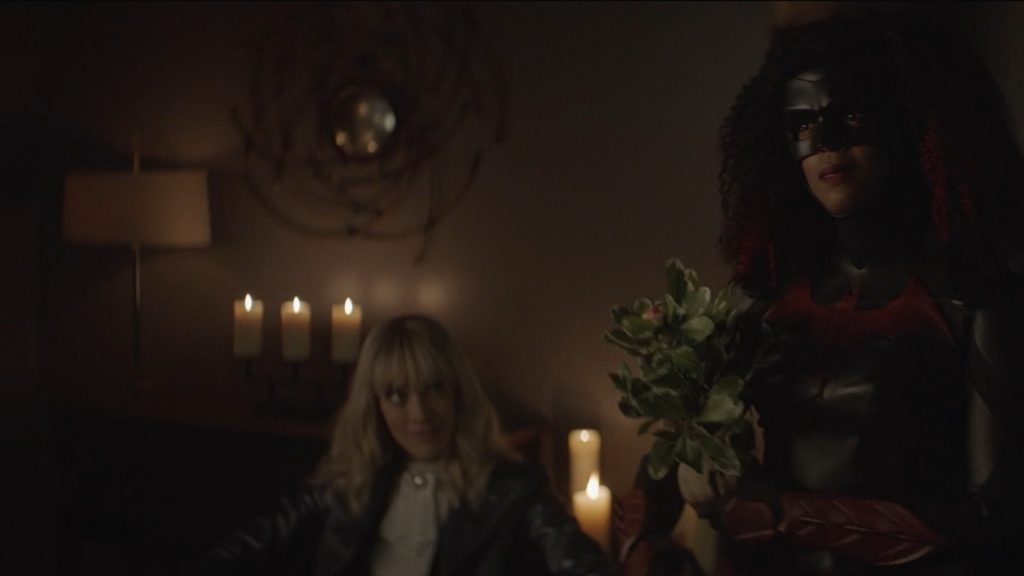 Luke is back to playing his dangerous card game with Tavaroff, his only ally Diggle. Tavaroff cheats, but Luke still manages to beat him with a Straight. He takes his money and walks, only for the sore loser to stalk him outside. There’s a fight, and Tavaroff is winning. Thankfully Diggle jumps in and saves his bacon, and scares the corrupt Crow off. Then Diggle and Luke talk about losing their fathers early, and Diggle helps him realize he’s still needed. He can join his father later, but now he needs to live and hold onto that righteous anger.

When Jacob comes to, he’s a prisoner of Sionis. The two share angry threats, and Jacob says he’ll call GCPD. Unfortunately, Black Mask has men working for GCPD, and they take Jacob away. Ryan brings Kate to the Tower, and Mary tries to hug her sister. Sadly, Kate doesn’t remember her. She does, however, remember Sophie, and they share a meaningful hug. And then she has another mental pain. This time, her vision is of young Kate being kept in a room by adult Circe. In the waking world, Kate goes rabid, and nearly kills Mary. Mary manages to knock her out with a syringe, and the women realize they need Alice to free Kate’s mind entirely. Which means they’re gonna need to trade Safiyah something to get her back. And the only thing she’d want is Ryan’s Desert Rose plant, Ryan’s last connection to her adoptive mother. Thus, they use the Bat Signal and morse code to summon Luke so he can track Alice down.

You Don’t Get This Extra Without a Little Shove 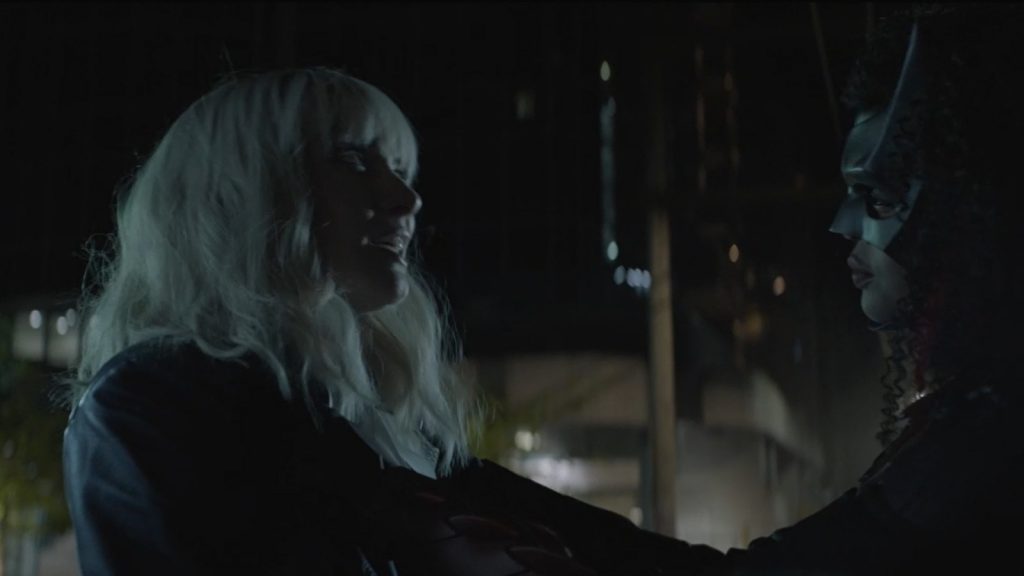 In captivity, Alice sees Jacob taken away by GCPD on TV. They ask him about his daughter being the criminal Alice, and he responds she’s a victim. Furthermore, that she has more humanity than most people, to survive what she has with any semblance of love. Alice has an emotional moment right before Safiyah says she’s owed an island. Apparently Alice’s pyrotechnics destroyed all of Coryana, not just her Desert Rose. Batwoman has perfect timing, and arrives to trade the last remaining Desert Rose. Safiyah accepts, though she questions why she cares about Kate and Alice. Ryan responds she owes Kate a debt for her second chance at life. Alice can’t keep her mouth shut. She mocks Safiyah on the way out, saying she’ll have her sister and lover. Safiyah hints that she won’t get everything she wants, and Alice fearfully exits.

Despite Ryan trading her Desert Rose to save Alice for Kate’s sake, Alice wants to go save Ocean first. The women argue, but Alice does her thing. She gets intercepted by Tatiana, but manages to stab the assassin in the neck. Sadly, Ocean is already dead, and with him part of Alice’s humanity.

The episode ends on a somber note. Jacob manages to get transferred from Blackgate, where he’s put several criminals, to Metropolis. But he’s still going to prison, thanks to Sionis’ police connections. He tells Mary he loves her, and that she has to save her sisters. Meanwhile Kate / Circe escapes back to Roman, and asks if she’s really Kate. He tries to gaslight her, and she stabs him. Then it all ends with Safiyah counseling him to tell the truth. Overall a good episode, but the meandering and confusing plot threads kept it from true excellence. 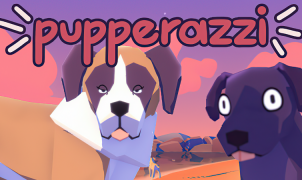