Don’t Judge a Book by Its Cover

Sometimes, when reviewing games, you need to remind yourself to keep an open mind. Because sometimes, you have the opportunity to play something billed as “the ultimate furry tale.” I’ll admit that my expectations were perhaps clouded by internet memes and American Dad jokes when I took on Winds of Change from Klace. But you know what they say about judging a book by its cover…

All That We See or Seem… 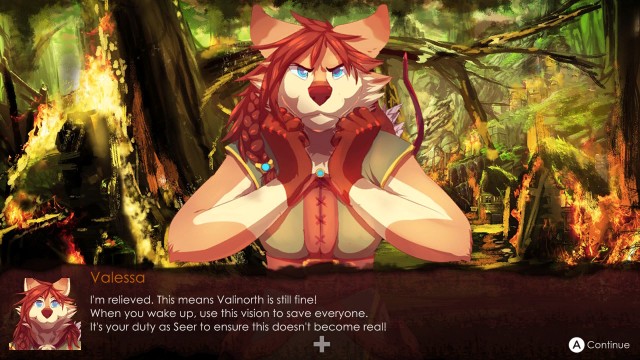 Winds of Change is a visual novel, so it’s no surprise that the game’s focus is on the story. And damn, what a story! The game begins with players taking on the role of the Seer or Seeress (you can choose your gender). You wake up to find your village is under attack, many of the buildings having been put to the torch. You find your faithful Scribe, whose job it is to record your prophetic visions. As horrifying as the scene before you is, you soon discover it’s thankfully just a vision. When you awaken from the distressing vision, your first job is to find your scribe in real life and relate to her all you have seen. Afterward, it’s off to the village elder to seek his counsel.

From here, the tale really takes off. You’re thrust into a power struggle that will determine the fate of all living beings. Along the way, you’ll discover more about the world you’ve been sheltered from for so long, and more about the companions you pick up along the way. Most importantly, you’ll slowly uncover old secrets that will turn everything you thought you knew on its head. 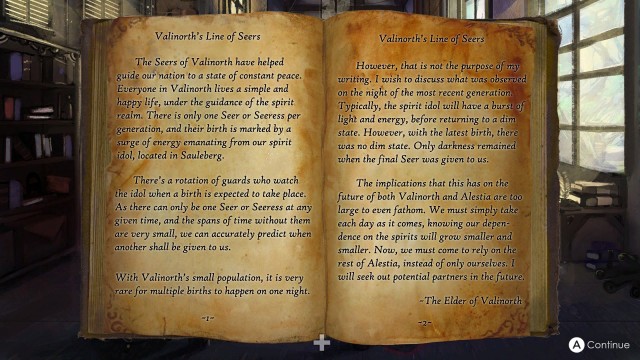 As engrossing as the story is, the gameplay of Winds of Change is surprisingly involved for a visual novel. While I’m used to making choices that affect how other characters see you and that alter the course you take through the game, Winds of Change takes it a step further. As you travel across the land of Alestia, you’ll gain new friends and followers. Some of them will actually become a permanent part of your party. That’s right, you actually have a permanent party that will follow you throughout the game. And how you interact with them will affect the trajectory the story takes.

Whenever you enter a new area, you’ll be given a chance to poke around and learn a few things about where you are, what you’re doing, and maybe even some insights into your companions. You can move a cursor around the screen, and it will change to a speech bubble when there’s something in the environment you can interact with, or if there’s an image of one of the characters in one of the corners of the screen. It’s important to explore each area thoroughly, as there are books to find that delve deeper into the lore of the world, as well as journal entries and letters that will give you more insight into your friends and companions. This might not seem important, but there are times when you’ll be presented with a question, and if you’ve read certain books, you’ll have the opportunity to actually answer it. 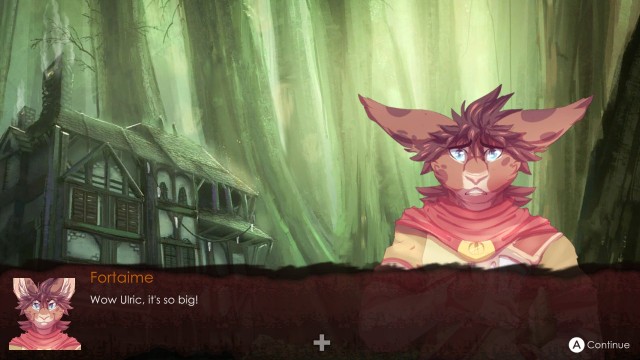 In the upper left corner of the screen, you’ll sometimes be given the opportunity to view a sort of “side chapter” about a character not currently in your party. These little side chapters often give you a peek at what happened before you met them, and sometimes even give you a glimpse of what the enemy is up to. In the bottom right corner of the screen, you’ll frequently be able to interact with members of your party. This can range from casual conversation to more important “heart-to-hearts.” A heart-to-heart conversation will permanently alter your relationship with each of your party members. You’ll be faced with several options – you can give an answer that’s friendly, flirty, sad, or playful, or neutral, depending on the circumstances. It’s important not to miss any of these conversations, as they’re critical to ultimately gaining trust with each person.

Speaking of building these relationships, you can actually romance any member of your party, regardless of gender. Additionally, you can pursue a romance with all of them at the same time! Which I definitely had to do. Gotta spread the love around, right? Impressively, should you choose to become romantically involved with multiple party members, they’ll actually discuss this amongst themselves. That’s right, they’ll totally talk about their dates and what they think of you when you’re not around. 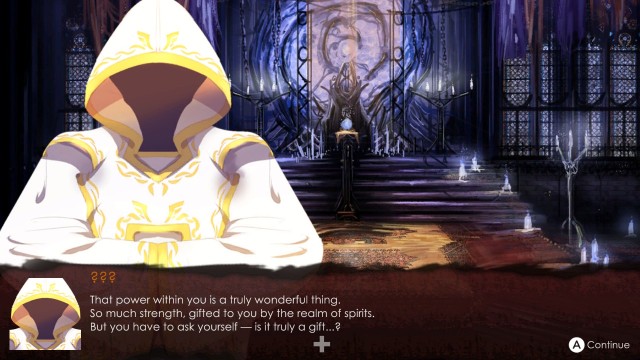 Artistically, Winds of Change is absolutely gorgeous. The character stills are lovingly drawn, and the backgrounds of each new area have this stunning storybook feeling to them. The characters themselves also have a lovely range of expressions depending on the situation. The music is beautiful and fits extremely well with the game’s mood and atmosphere. And with a few exceptions, the quality of the voice acting is really quite nice.

Of course, as with any game, Winds of Change does have a few things holding it back. There are a few plot points I found difficult to swallow (namely, an event early-ish in the game involving Shane), and I think it could have benefitted the voice actors if they were given a pronunciation guide. Which is perhaps a bit presumptuous on my part, but there were a few instances in which characters offered wildly different pronunciations of “the Triumvirate,” which is an integral part of the story. They also seemed to change the pronunciation of a character’s name halfway through the game, which was kind of jarring.

Epic Fantasy at Its Best

Overall, I honestly loved Winds of Change. Stellar writing, great voice acting, branching choices, and gorgeous artwork make for an impressive visual novel. I definitely encourage you to look past what you think you know about certain online communities and not judge this book by its cover. I don’t think you’ll be disappointed in this one.

Full disclosure: This review is based on a copy of Winds of Change provided by the developer.