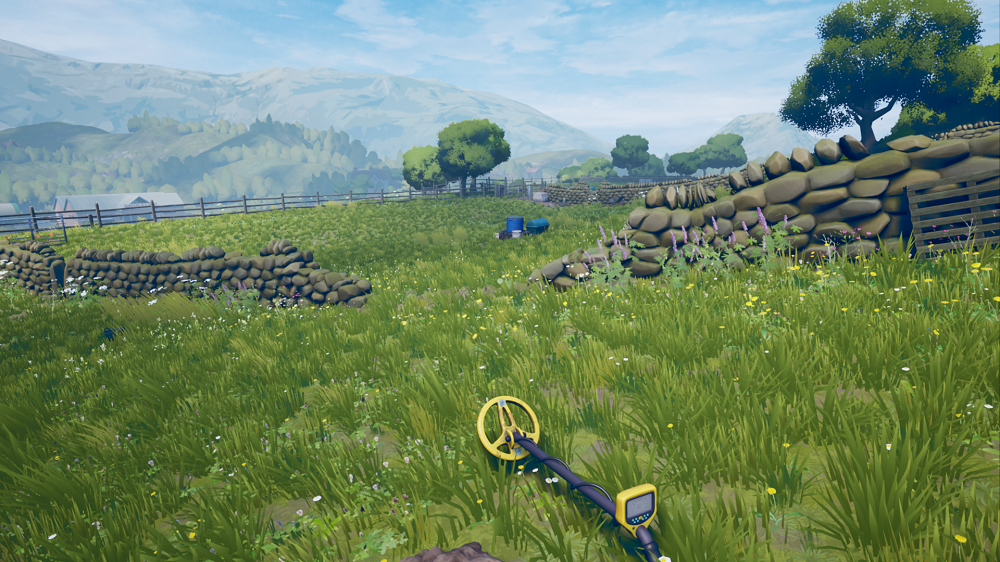 On paper, Beth had it made: a manager within her parents’ company primed to take the CEO position and engaged to a “minted” man, all the puzzle pieces were falling into place for the young Englishwoman. In practice, everything was falling apart — in truth, she and her sister were rivals, both vying for the top spot in the event of their father’s passing, and her fiancé, Jake, had just called it quits on their upcoming nuptials. The straw that broke the camel’s back? The farm down the street — the one place where she had experienced true happiness — had just been sold, and builders would arrive the next week to turn it into a solar farm. Panicked, she turns to the only friend who can help her with some unfinished business before the week is out, and the pair begin rooting around for buried treasure — will they uncover far more than Beth bargained for? 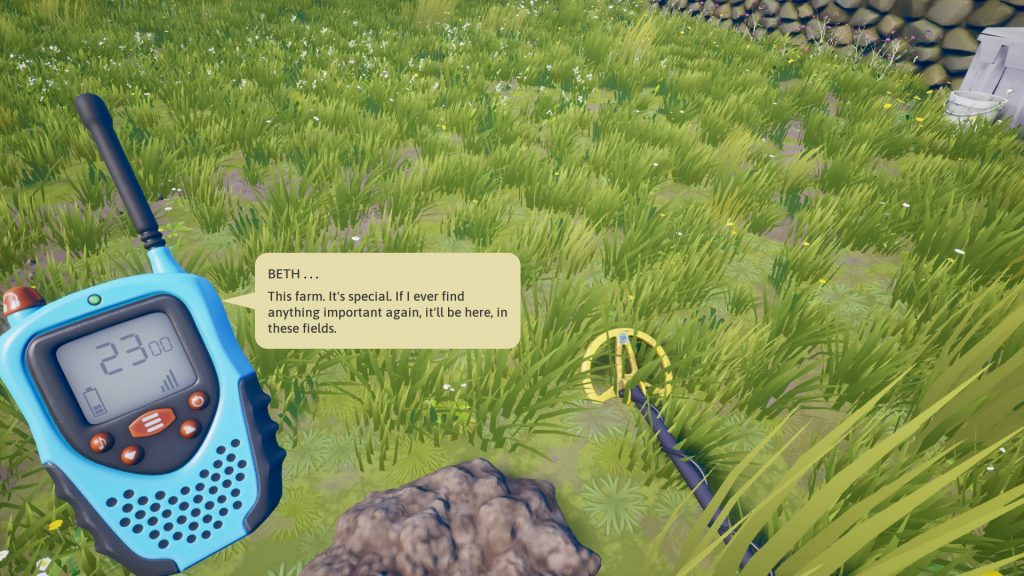 The Magnificent Trufflepigs has players taking on the role of Adam, Beth’s childhood friend who had previously helped her out in difficult times. She’s enlisted Adam to assist her in locating an earring; only problem is, she has no idea where the earring could be, and the pair must utilize Beth’s hobby metal detectors in order to have a prayer of finding it. This isn’t just any earring, mind you — it’s the mate to an earring she found when she was a child, which netted her a tidy sum and some notoriety in the local papers. Trying to recapture that taste of happiness while her life implodes sounds reasonable, but it’s during their weeklong expedition that, with Adam’s help, Beth will uncover a lot more than just some missing jewelry.

Controls are exceedingly simple — if you’ve played a walking simulator before, you’ve already mastered the control scheme. WASD moves Adam around, while the mouse is in charge of Adam’s line of vision (alternatively, the arrow keys can replace the mouse in this regard). E will take out and put away the metal detector; in addition, it also controls digging with the shovel, while Q commandeers the trowel. Finally, M pulls out the map, which marks where you’ve previously found buried treasure. In terms of actual walking, the speed is fine while running around the field but noticeably slower when the metal detector is out; this may bother those who don’t stop to smell the roses, but, like most walking simulators, this game is about the journey, not the destination. 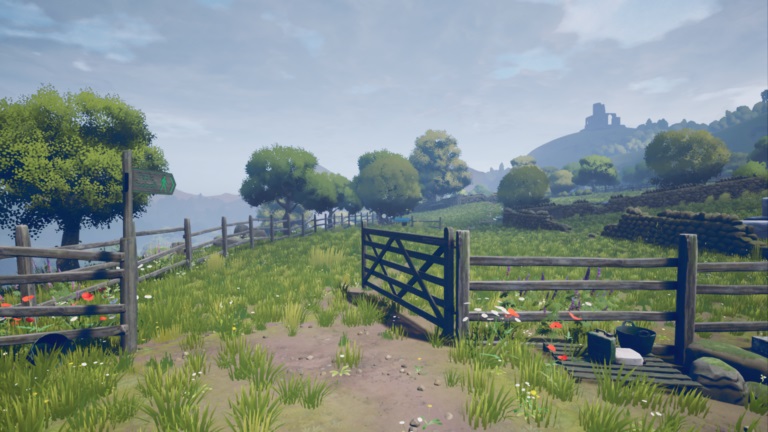 When it comes to aesthetics, The Magnificent Trufflepigs is beautifully bucolic. Set in the picturesque English countryside, the quaint farm is surrounded by signs of various eras of English history, from castle ruins up on the towering hills above to the church, school, and town down below. The sun shines warmly with the occasional cloud passing over, shadowing the ground down below, while birds chirp and chatter amongst themselves. And with low volume, ambient music that juuuuuuuuust registers, The Magnificent Trufflepigs is a soothing experience that definitely pleases the eyes and ears.

One thing that really upped the quality was the voice acting, which flowed smoothly and naturally. Fans of BBC shows will recognize the voices of both Adam and Beth, who are played by Arthur Darvill (Doctor Who, DC’s Legends of Tomorrow) and Luci Fish (Safe House, Another Eden), respectively. Normally I wouldn’t say that video games require voice acting, but I feel like so much would have been lost without these highly talented actors lending their voices to the characters. Coupled with how the lines were delivered — over walkie-talkie — the pauses between lines that are normally odd and noticeable felt realistic and served to add tension as desired. Since you never see Adam or Beth, all personality was riding on voice acting, and the quality shines through here. 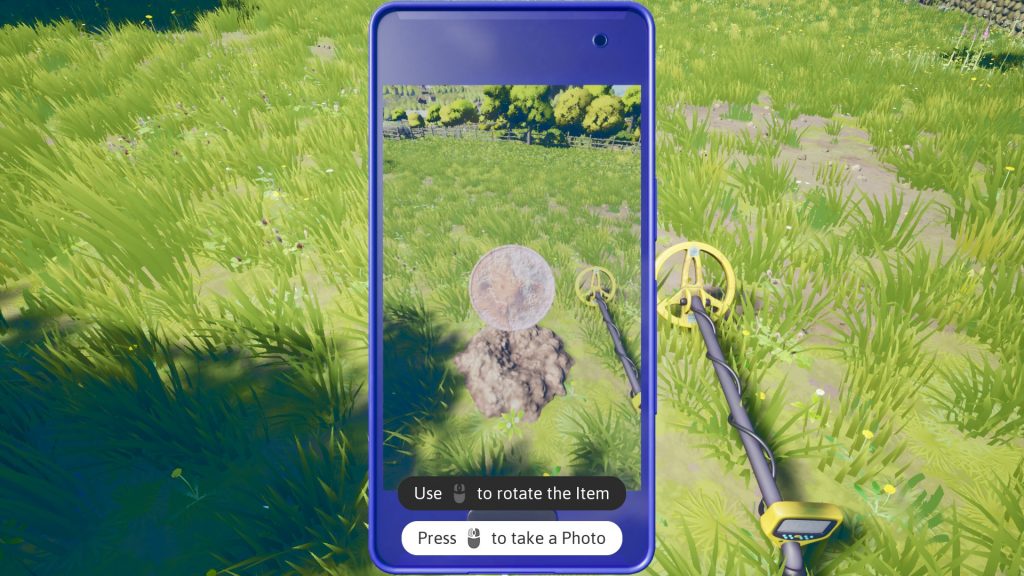 The Magnificent Trufflepigs’ writing is strong when it comes to conveying personality, but I found it to be a bit at odds with the whole metal detecting mechanic. It’s clear that, whatever Beth finds out there, it’s going to be critically important to her personal development, but you only get so much time to explore the fields before sunset. Which, I get why that happened, but when you’re handed a metal detector and told to find treasure, the last thing you want to do is… stop looking. Additionally, the twist at the end is so nuanced that it’s easy to miss; I actually went to the Steam discussions looking for hints at multiple endings to see I had missed the twist entirely. Once I played it a second time I realized I had skimmed over plenty of hints alluding to the big unveiling, but if you require blunt force communication like me, chances are you might miss it too; in fact, the biggest hint of all comes in the form of some graffiti depicting a very, very related movie title, but if you haven’t seen the movie, you won’t get the hint at all.

Despite any hiccups, The Magnificent Trufflepigs does something very sophisticated: it created a real human character, flaws and all, undergoing some very uncomfortable growth that we got to experience alongside her in the exact way she experienced it. I also experienced quite a slew of emotions due to the confusing relationship between the characters — my first playthrough ended with frustration, while my second playthrough ended with conflicted, bittersweet blues. I was happy for one character, but became deeply reflective on the nature of the second character and what their entire existence meant. That level of philosophical exploration definitely tipped the scales positively, and while it’s easy to miss, I applaud the effort nonetheless.

The Magnificent Trufflepigs asks players to stop frantically trying to achieve arbitrary goals and instead reflect on why we’ve undertaken them in the first place. It employs an interesting and underutilized mechanic, only to completely change it up once the main character achieves some desperately needed personal growth. It may require a second playthrough to totally understand not only the big reveal but overarching message; luckily, it’s a three hour excursion (at most) across bucolic English countryside, so that extra time is time well spent. If you find yourself exhausted by constantly trying to check things off life’s list, you deserve a breather — grab a metal detector and take a walk with The Magnificent Trufflepigs.

Full disclosure: This review is based on a copy of The Magnificent Trufflepigs provided by the developer. 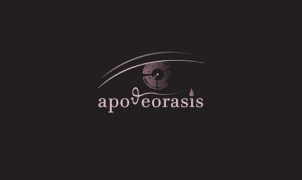