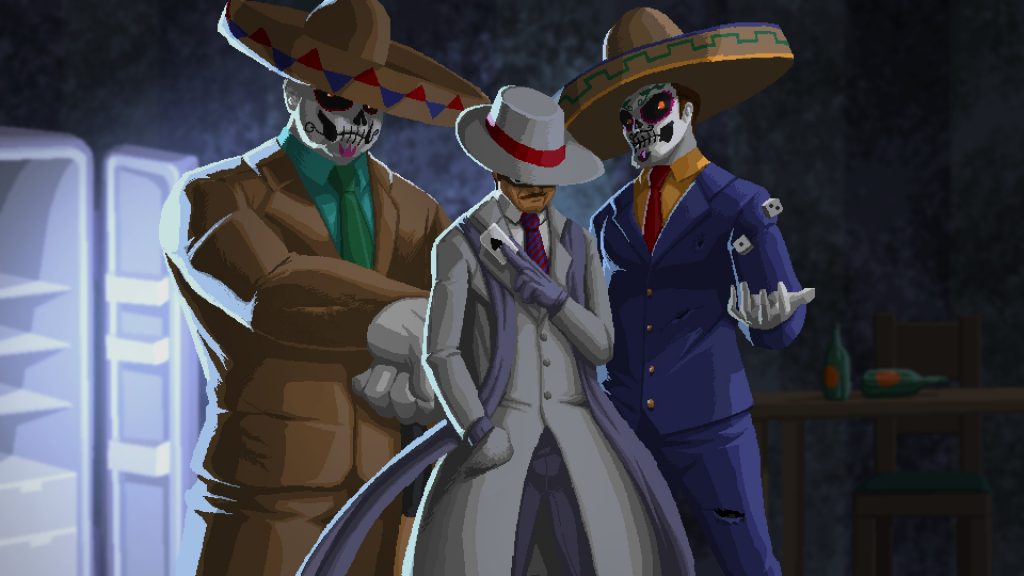 There was a time when Johnny Souza wasn’t some washed out has-been who saw the bottom of a bottle more than any real action. There was a time when Souza and his partner, Sullivan, were respected detectives, their names striking fear in the hearts of the dark underbelly of Pecaminosa and hope into the poor souls stuck in this dusty town. Of course, that was a time when Charlie “Two Angels” was still alive — before he had eaten lead from Souza’s gun. Now, an unexpected visit from Charlie’s ghost offers both men a shot at redemption: Souza cleans up Charlie’s list, and Charlie lets Souza know his ex-partner’s whereabouts before his appointment with Saint Peter. Simple, right? 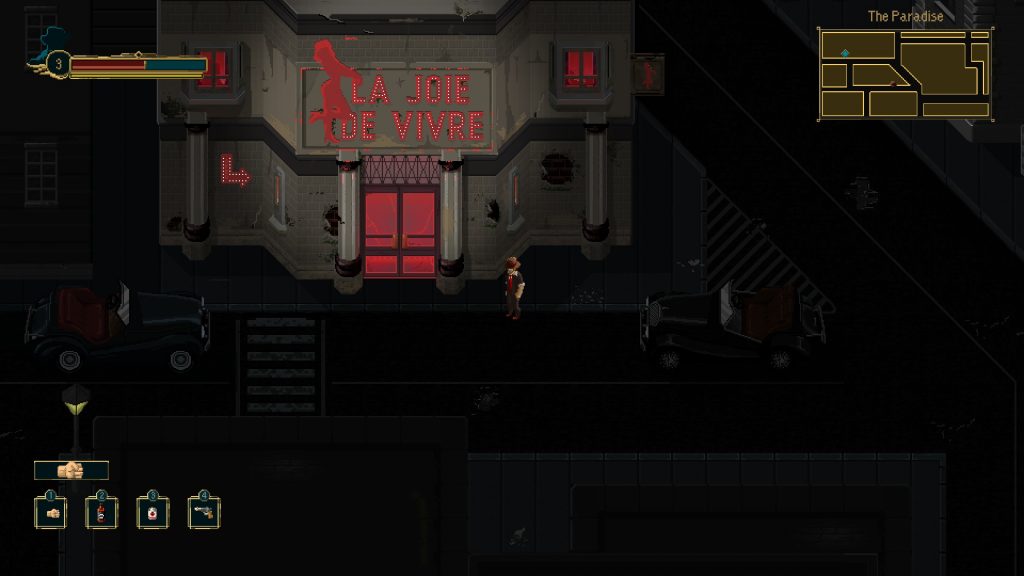 Pecaminosa – A Pixel Noir Game’s controls work well as a twin-stick on a controller and are serviceable on a keyboard and mouse — either option will work just fine. WASD moves Souza around, hotkeys by way of the first three numbers allow the player to assign items as needed, and mouse to punch or shoot. The aesthetics are also fantastic; the combination of pixel art and noir style really bring out the best of both worlds. I was pleasantly surprised by the “cinematics” as it were, as they were very detailed images that seemed to come alive with moving lighting. Complete with dark and brooding music, Pecaminosa – A Pixel Noir Game looks and feels good.

When exploring the dusty town of Pecaminosa, it’s clear the inspirations came from all over the place. It certainly feels dated, like a good noir often does, around the 1940s. The setting is supposed to be a border town between the US and Mexico, but as someone from Los Angeles, I’d say it’s perhaps closer to the indiegogo page’s description of being more like Chicago. With green lawns, wet sewers, and far too few adobe buildings with orange tile roofs, I’m not feeling much familiarity with this city. Even the later desert levels feel just a bit…off. With that being said, it’s still a gritty, grimy place to live, which suits the noir style just fine. 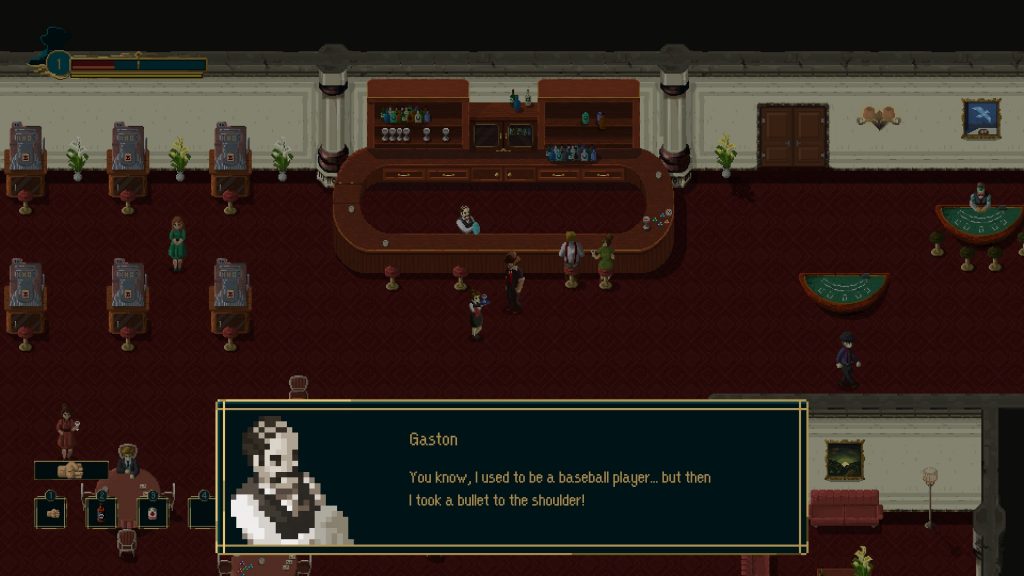 As for Pecaminosa – A Pixel Noir Game’s story, I found it to be organized and enjoyable. The game is separated into chapters, and each chapter has bullet points (get it) that keep Souza on track, which is handy considering Charlie’s list isn’t short. Wandering Pecaminosa and the surrounding area yields plenty of pockets to explore with NPCs going about their routines. Interacting with them always rewards players with dialogue, ranging from depressing to downright funny. I personally appreciated the wobbly drunk stumbling home from a bar, because when you approach him, he tries to correct his balance so he can stand up straight to speak with you. It’s those little details that make Pecaminosa – A Pixel Noir Game shine.

Pecaminosa – A Pixel Noir Game’s RPG attributes are quite enjoyable, although they feel perhaps a little light. If you’re familiar with Fallout, you may remember the S.P.E.C.I.A.L. system, with each letter standing for a specific skill — Strength, Perception, Endurance, Charisma, Intelligence, Agility and Luck. Pecaminosa – A Pixel Noir Game’s skill system is quite similar, implementing a L.I.F.E. skillset: Luck, Intelligence, Force, and Endurance. Putting points into different skills means a different approach to conversations and fights; put points into Force and you’ll have an easier time beating down baddies, while prioritizing Intelligence means NPCs won’t win any arguments against your clever wit. Reminiscent of Disco Elysium to a degree, this means there are multiple ways to play good cop, bad cop. 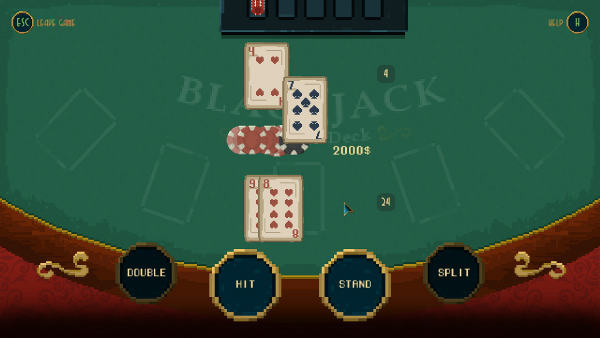 While wandering the streets of this rundown town of depression and debauchery, I couldn’t help but think this was akin to a top-down RPG version of River City Ransom, which was a cool vibe, certainly. But once I got into the second chapter and started roaming around the desert, something about the game immediately changed, both in terms of feel and difficulty setting. Don’t get me wrong, I understand games are supposed to get harder as you progress and all, but the once easily-spotted save areas became scant, which was pretty frustrating. It almost felt like a completely different game moving onto the next chapter — no more talking, just fighting scorpions and other enemies (won’t spoil what they are — just… enemies). With that being said, if you enjoy twin-stick gameplay you probably won’t miss the talking and instead relish the action.

Despite any complaints I may have with Pecaminosa – A Pixel Noir Game, it’s still a great noir title at the end of the day. I spent most of my time running around, punching garbage bags and rats looking for bullets and half a bottle of Mack, playing cards, and sticking my nose in just about every nook and cranny I could find. The ramp up from chapter one to chapter two felt like booting up a sequel that had been made years apart, but both were still fun regardless. If I had to describe it, this title felt a lot like sinking into a beat up leather chair — it’s comfortable and familiar without much pretense, and it feels pretty good despite any cracks in the material.

Pecaminosa – A Pixel Noir Game hits all the right notes in both the pixel-art style and noir genre. It has fun fights, challenging bosses, interesting art, and even some entertaining mini-games to break the routine. It’s easy to recommend but difficult to master; expect more action and less mystery with this police action RPG. If you want something that feels new yet simultaneously possesses retro vibes, take a deep, long draft of Pecaminosa – A Pixel Noir Game.

Editor’s note: This review is based on a copy of Pecaminosa – A Pixel Noir Game given to HeyPoorPlayer by the developer.