To Save Our Mother Earth From Any Alien Attacks! 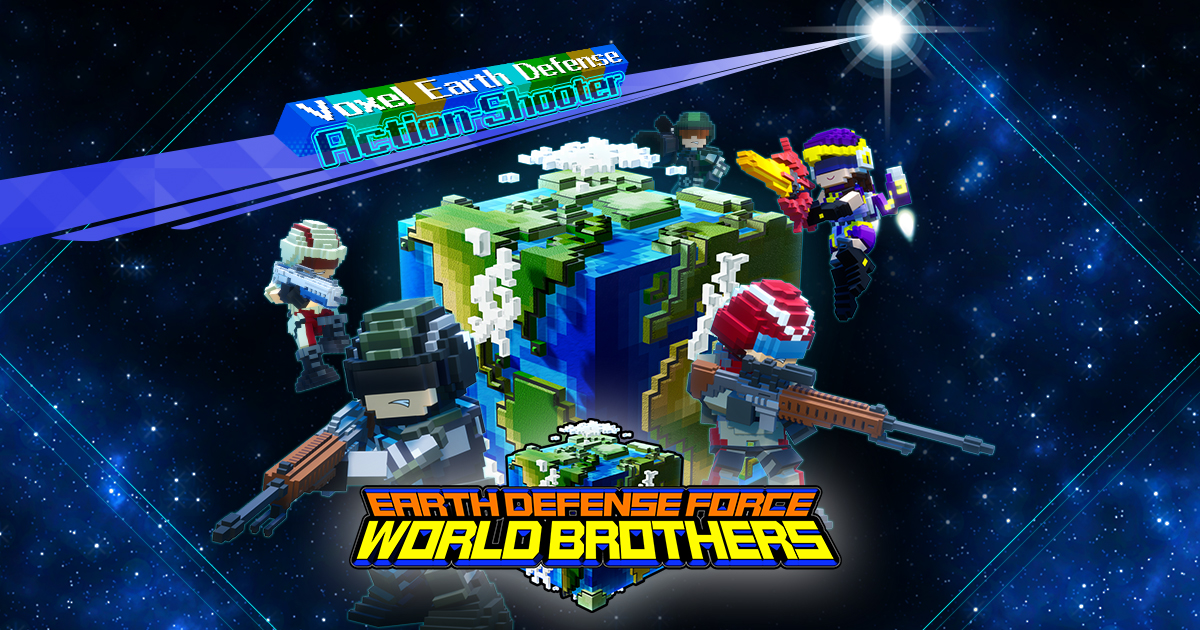 The Earth Defense Force series is known for having classic 50’s B-movie staples like giant ants and flying saucers facing down against more contemporary anime standbys like wing-suited troopers and giant mecha. That remains the case in Earth Defense Force: World Brothers, but now the aesthetic has been further merged with the blocky Minecraft style Voxel art look. I’ve heard first-hand some misgivings over whether these cutesy new trappings would fit the insanely random and outrageously violent gameplay of the EDF series. Perhaps the real question they could have been asking though is: could this new look and feel actually enhance the chaos?

To cut a long story short, it certainly does! EDF: World Brothers begins explaining how the humorously cubic planet Earth came to be fractured by an evil alien overlord. Now fragments of our beautiful home planet are drifting through space and only the Earth Defense Force, rising up again from the ashes, can reconstitute our beloved world and save it from hordes of malignant robots and giant ants. On this outing, you’ll have to reconstitute the shattered Earth Defense Force by rescuing characters from around the world, making your team a veritable cultural potpourri. 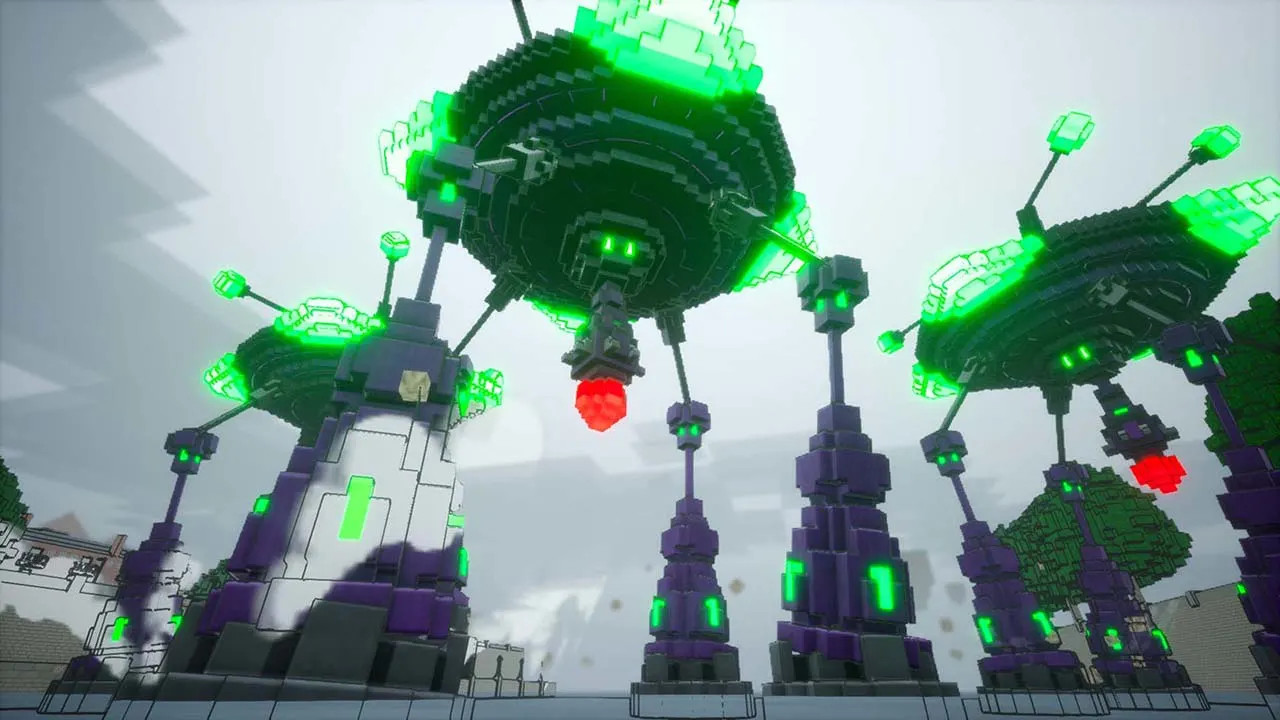 Right from the off, it’ll become clear that this is no ordinary EDF game. One of the first characters you’ll rescue is a Dutch maiden with pigtails, clogs and traditional Netherlandian garb. Once her SP gauge has been raised to the maximum by pummeling foes with her rifle, she can, like every other character in the game, unleash a devastating special move. She’s able to throw a windmill at the ground which blows away oncoming foes, creating a safer area from which to shoot them. Other characters have similar, joyfully characterful special moves like the pop idol sister who throws out a variety of sugary confections which heal surrounding characters or the mariachi troubadour who plays a fiery Latin rhythm to buff surrounding allies.

Fundamentally, the core gameplay of most EDF titles is intact. The main objective is still to blast every alien on the map and destroy the lairs from which they spawn from. Whereas in previous entries, you’d have the choice of countless weapons that would decide your playstyle, now it’s much more specific to which of the many characters you are playing as.

What’s unique about World Brothers is how the player can switch between four different world brothers and sisters they’ve rescued playing through the campaign. Each character has their own health bar which can often be depleted faster than health pickups appear on the game world, so switching out is often a necessity. 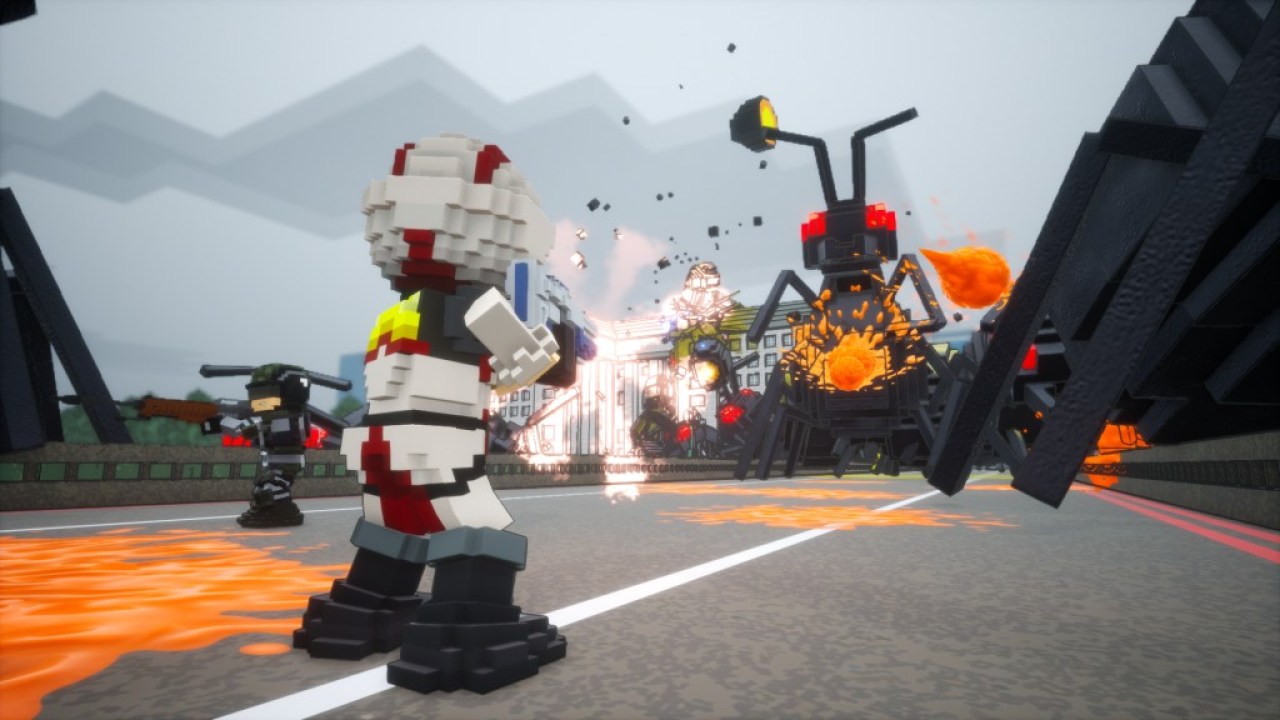 The character switching mechanic can lead to some interesting strategies being deployed. In one mission, I’d have the pop idol sister use her ability to quickly run around and get to quick locations quicker. I’d take a wing diver sister to fly above the fray and find more comrades to rescue hidden away atop skyscrapers and clifftops. Then I’d switch to the Ninja brother whose powerful sword attacks combined with his dash ability will let him escape dire situations when cornered. Instead of each player being part of a team, each player is a team unto themselves, which adds a new layer of depth. Whereas past EDF games have run the risk of the player getting too tied down to one playstyle as they level a single character type, World Brothers actively encourages diversity and having a well rounded team every match.

The voxel style of World Brothers really lends itself well to a series where collateral damage is all part of the anarchic fun. When haphazardly tossing around grenades and explosives, it’s inevitable that civilian buildings get caught in the crossfire and watching the blocky structures tumble down has the same cathartic effect of wrecking your Lego construction after you’ve decided to build something else. 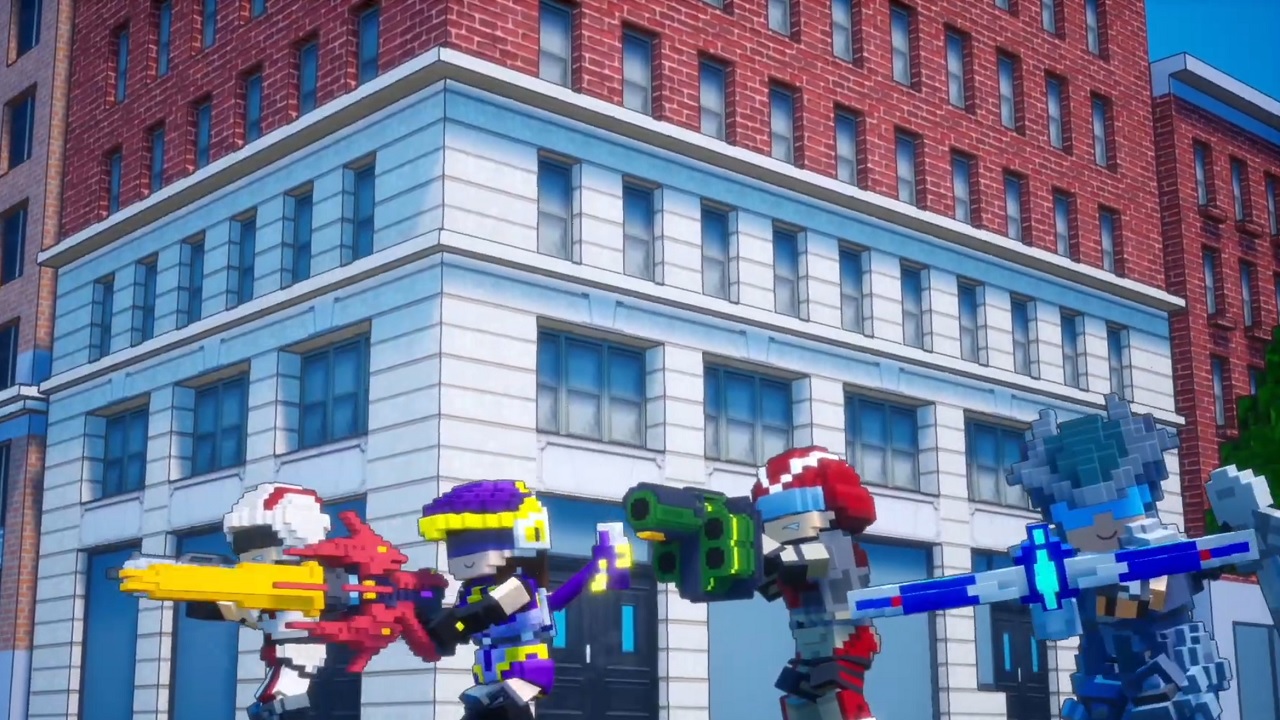 Of course, it wouldn’t be an EDF game without the ability to invite your friends to join in on the fun. Up to three compatriots can join you on any of the campaign missions. This is definitely the most fun way to play World Brothers, particularly on the high difficulties where your friends can get caught up in the friendly fire. The main difference you’ll feel in World Brothers is that instead of each of your friends filling a different role in the team, each player is a four character team in themselves. This definitely means that co-operative play is less strategic, since everyone is an all-rounder, making the game more accessible but some will miss the thoughtful aspect of having to create a team best suited to work together on any particular level.

Indeed, as much as World Brothers does introduce new ideas and concepts into the traditional formula, there is something lost from previous entries. Despite EDF having a very campy feel, it could get genuinely terrifying and become a harrowing battle for survival, such as when you’d journey deep into subterranean giant ant burrows in EDF 4. There was also a greater sense of scale in EDF 4, such as when mechanical mastadons would be stomping up along the shorelines of Japan Godzilla-like and you’d be firing rockets at them from miles away. The levels in World Brothers just don’t feel quite as vast or epic anymore and there’s scarcely any times when you feel like you’re descending into a heart of darkness.

Instead, there are light-hearted storylines that have the ninja and cowboy brothers trying to find ingredients to make tofu and discussing the finer points of American versus Japanese cuisine. We had an interview session with EDF series creator Okajima-san where he revealed that he wanted World Brothers to appeal to younger gamers so it’s understandable the levels are smaller so as to be more action-packed and that the presentation is more kid-friendly. Nonetheless, I think most adult EDF fans should be able to enjoy World Brothers, but there will definitely still be a few who feel like something has been lost in this translation.

Earth Defense Force: World Brothers took a big risk giving a whole new look and feel to the EDF series, but it’s a gamble that pays off well. The more cutesy stylings and arcadey gameplay will turn off some, but many others will find it to be a fresh twist on the EDF formula. With a gigantic cast of international characters to play as, there’s plenty of chaotic joy to be had.

Full Disclosure: This review is based on a copy of Earth Defense Force: World Brothers given to Hey Poor Player by the publisher