The Wild At Heart Review (PC) 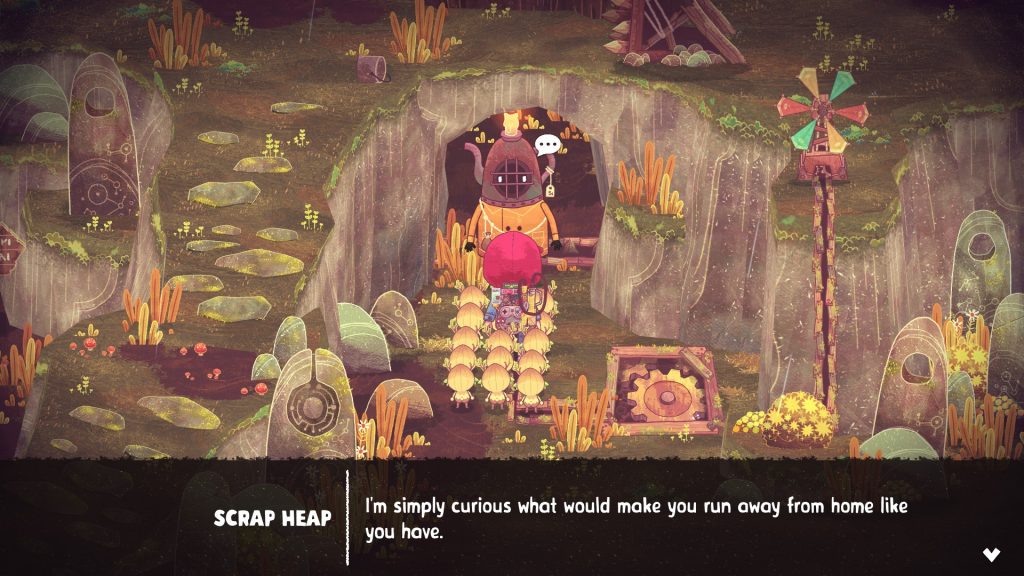 What do you get when you mix Pikmin’s gameplay, Stranger Things’ vibes, Luigi’s Mansion vacuum skills, Welcome to Elk’s character walk cycles, She and the Light Bearer’s colors, and the satisfying ability to kick all the things a la Radiata Stories? A gem, certainly — a gem by the name of The Wild At Heart. Developed by Moonlight Kids and published by Humble Games, The Wild At Heart is a hand-drawn puzzle adventure game that asks players to venture into the Deep Woods to help two precocious children fulfill their destiny. Available on PC, Xbox One, and XBox Series X for $24.99, this pretty Pikmin-like puzzler offers a whole lot of heart for the 15 – 20 odd hours it takes to complete it and is absolutely worth every moment spent with it.

The Wild At Heart opens up on Wake, a resourceful 12-year-old boy, ready to enact “The Plan.” What is that plan? It’s pretty top-secret stuff, but it seems to have something to do with running away from home with his best friend, Kirby. Armed with his trusty vacuum backpack and a PB&J, Wake is raring and ready to go — he’s pretty sure his dad won’t miss him until it’s time to take out the trash, and even then he won’t be bothered. Guess their relationship is a little icy, to say the least… now, to just find Kirby somewhere in all these trees… 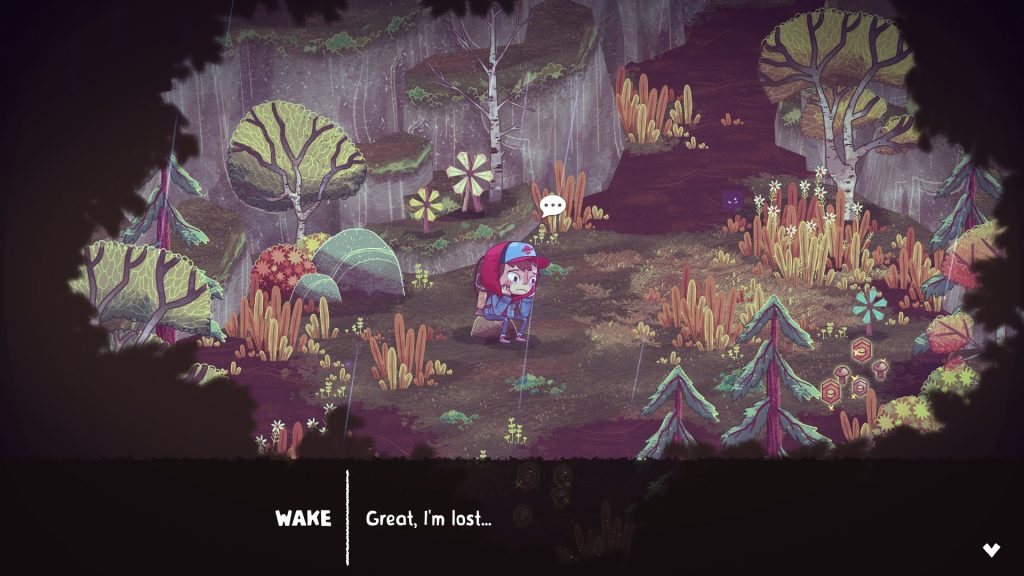 While sitting on a rock in the middle of a great big forest, feeling sad and lost, Wake spots something intriguing — a small, anthropomorphic creature that seems to be beckoning him to go deeper in the woods. Curious, he follows the creature, only to be startled by the sight of an old man, who introduces himself as Grey Coat. As it would turn out, Grey Coat is of the order of the Greenshields, an organization that he can’t really remember, but he knows that it has something to do with keeping the Spritelings — that creature — safe and to halt the spread of the Never — mysteriously dangerous shadow beings that go bump in the night. Convinced that you’ve been chosen by the spirit that watches over these woods, he tasks you with finding the rest of the Greenshields, retrieving the artifacts that keep the Deep Woods in order, and setting their world right once more.

Of course,  you won’t be doing all this alone — those Spritelings are here to help! By throwing them at monsters, rocks, and other barriers, they’ll kick and headbutt all obstacles out of your way in no time. Some Spritelings are different than others and can serve different functions — the Twiglings can destroy poisonous mushrooms, while the Icelings are impervious to the frigid cold. Additionally, you’ll eventually run into your plucky pal Kirby while meandering through the forest; between the two of you, you’re bound to solve the mysteries of the Deep Woods… and perhaps do some introspection while you’re at it. 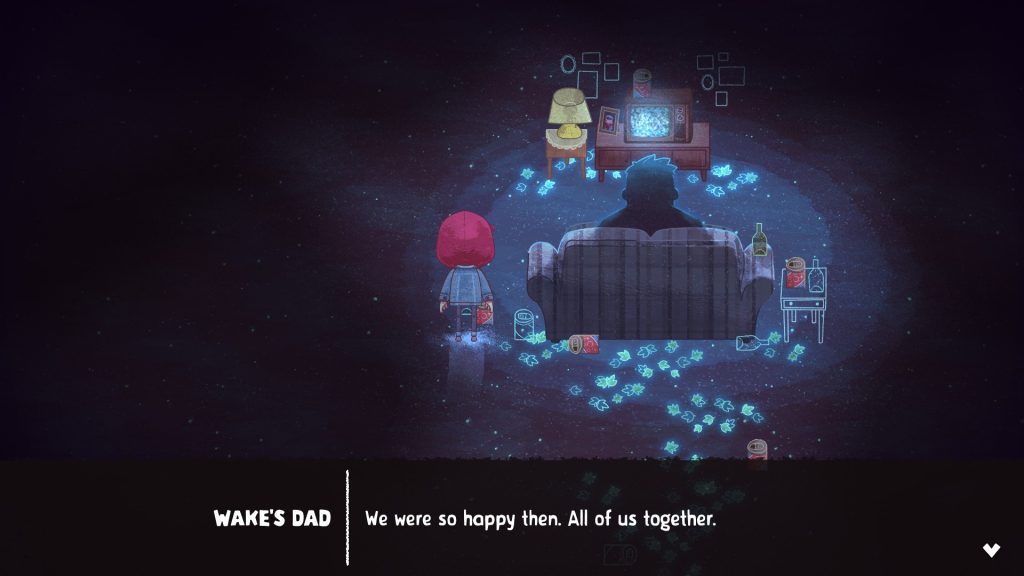 The Wild At Heart encourages players to use headphones and a controller, and while I’m sure any player can get away with not using the former, I strongly suggest using the latter. There’s a lot of little stuff to manage all at once, and it’s pretty intuitive to get the swing of things on a controller. The actual gameplay itself is also a pretty seamless experience — as I explored the Deep Woods, I’d find plenty of places to explore that would slowly yield their secrets over time. I was never stalled at any point; instead of going in one direction in a linear fashion, I would often find myself pushing new boundaries in one area, only to run out of time, go camp before it gets dark and the Never get me, then wake up and make progress exploring a completely new area close by.

As far as the puzzle gameplay, it’s all in how you can progress to the goal area. In an icy world, how can you cross a freezing river without getting chilled to the bone? It’ll take a lot of coordination between Wake, Kirby, and all the spritelings, but between the 37 or so of you, you can build bridges, crawl through logs, clear enemies, break down gates, and move heavy objects to complete your mission. All for the sake of driving away the Never once and for all — the fate of the Deep Woods and the real world depends on it. 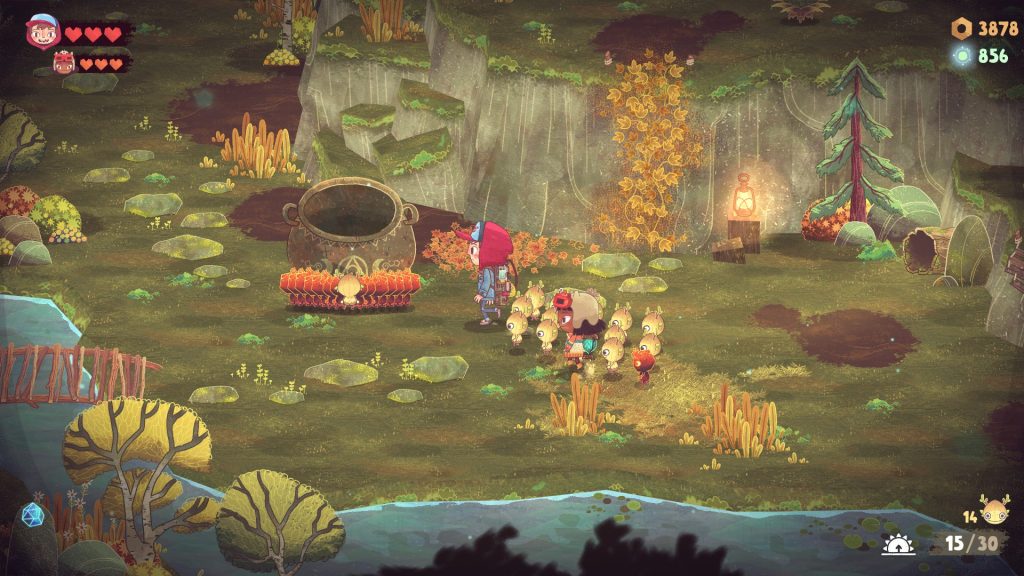 Although there were plenty of moments that were definite head-scratchers, there never really was a moment where I felt stuck; additionally, I had a really hard time putting the controller down. This is very much a game that puzzle fans and problem-solvers will lose themselves in, and I think it’s because incremental progress is so easy to make. If you’re hitting a wall in one area, there are at least three other regions to check out that may yield the answer you need for the one you’re struggling with. Every day is productive in Wake and Kirby’s adventure, and I think that feeling is a little bit addictive.

I only have one real complaint, and that’s that the pacing is slightly off in terms of dispensing information to players. I constantly felt like one step ahead of the game — it was super good at leading me to believe I needed to complete a certain action or go to a specific place, but I would do that to be met with a dead end. I would later realize I hadn’t checked back in with Grey Coat beforehand, which was apparently the necessary step to trigger the desired action. It was a little frustrating in the beginning for sure, but after the first few hours the need to check back in with the strange mentor diminished, and pacing felt more natural.

With soothing music, calming visuals, addictive gameplay, and a unique tale that unfolds slowly, The Wild At Heart is incredibly easy to recommend. In fact, the only thing you will need to find real enjoyment with this gem is a controller and a good 20 hours to sink into it. There is so much charm and energy in this little puzzler, and I was so engaged in figuring out the whimsical world of the Deep Woods that I hardly noticed the time just whizzing by. If you’re the type that likes to play problem-solving games to relax, you absolutely need The Wild At Heart.

Full disclosure: This review is based on a copy of The Wild At Heart provided by the developer. 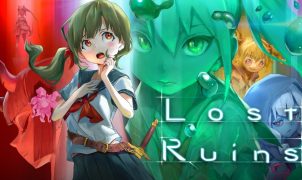