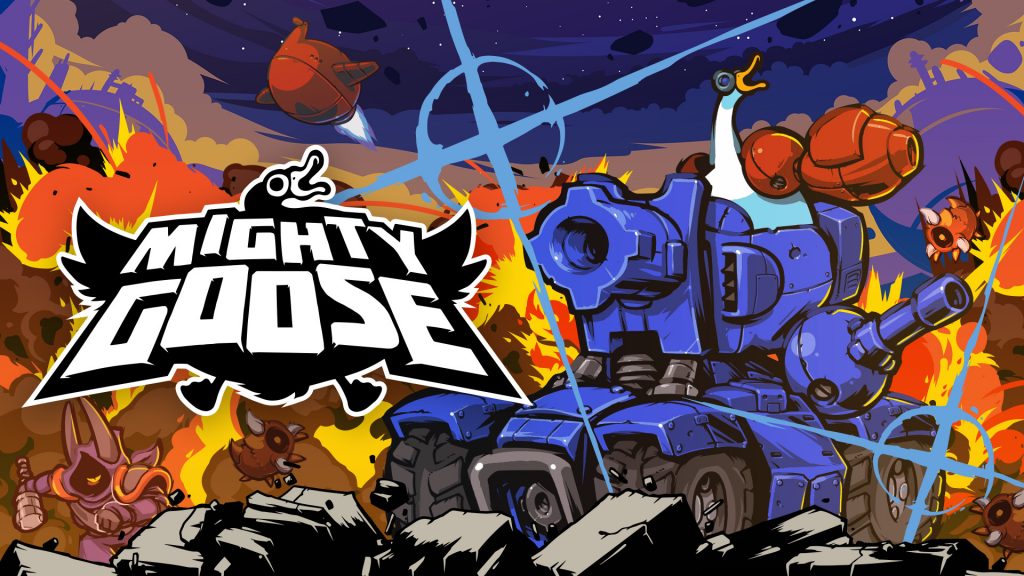 While a good many gamers wait with bated breath for the next AAA title, I’m a bit different. I prefer covering the wacky, unconventional, and delightful games. The ones that often fall through the cracks. They light up my brain’s creativity circuits in the most enjoyable fashion and keep me invested in the indie game scene. The latest game to do just that is Mighty Goose. Developed by Blastmode and MP2 Games and published by Playism, it’s a completely bonkers adventure whose development I’ve been following for months. You play a feathered bounty hunter set against the nefarious Void King. Can you stop his cunning plans? Or will this goose get cooked? 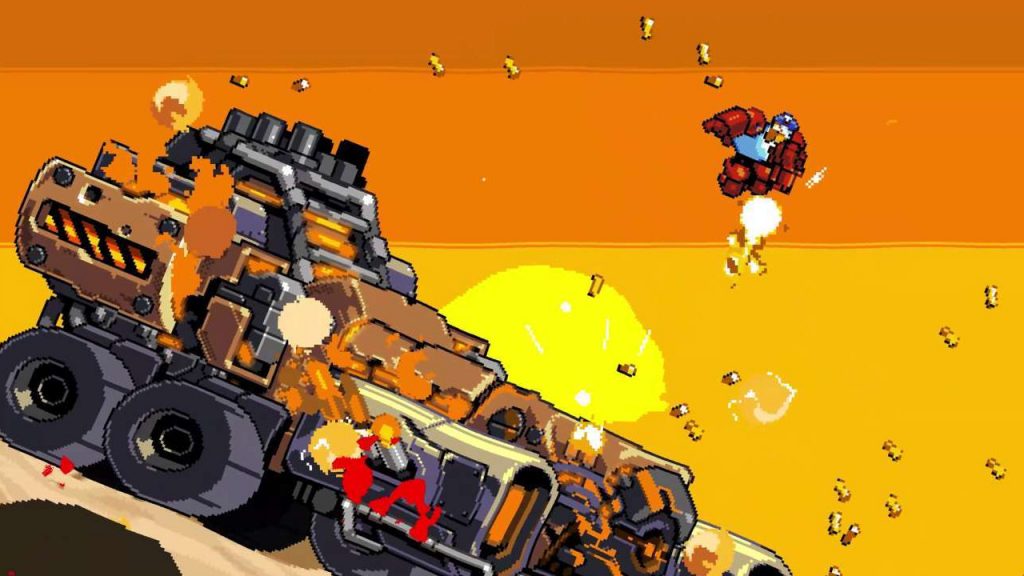 It’s immediately apparent Mighty Goose is inspired by several classic series. It shares a lot in common with Metal Slug, but also Contra and even Mischief Makers. It’s a game abounding with humor and no shortage of silliness. It has you travel from level to level, fighting through hordes of foes and challenging bosses. Not every stage has a boss fight, but each stage will test you. Cause though the titular goose is indeed very mighty, that’s not the same as invincible.

No amount of armor will keep the sheer volume of bullets, missiles and lasers hurled your way at bay. In fact, you can only sustain 4 hits before you bite the bullet. Luckily, there are sufficient checkpoints and infinite lives to keep you coming back for more. Which is good, since nearly every stage is comprised of multiple long segments. You’ll also regularly find health paks to fully heal yourself, at least in the first few hours of the game. Once you get to the postgame content, they mix up elements and ramp up the difficulty. 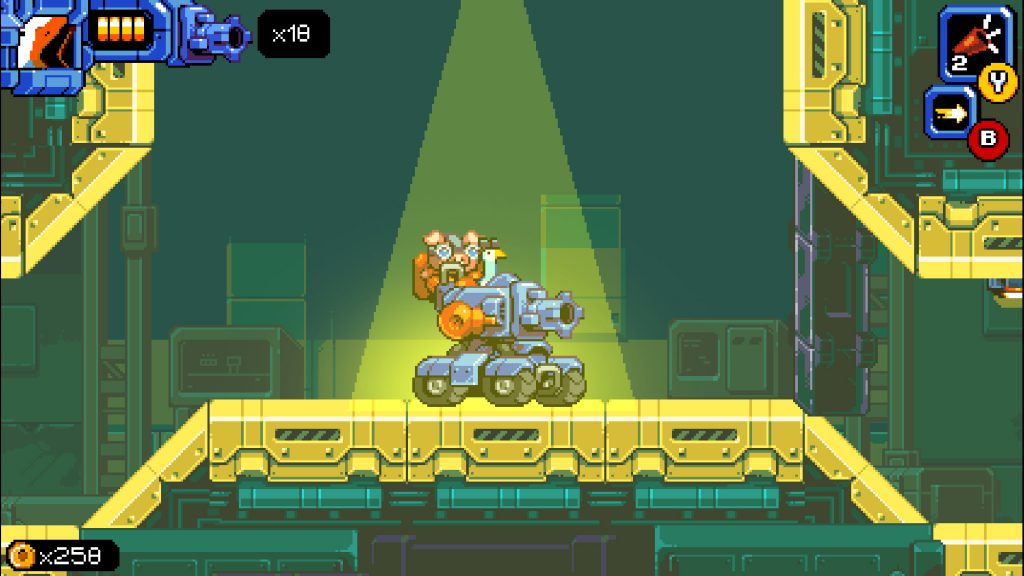 As you play through the levels, you’ll unlock companions and upgrades. You can bring one ally with you each level, and they do a variety of helpful things. Some will run about slashing foes, others will fire slow-moving missiles, and one even regularly spawns machine guns. I ended up using that particular ally, Commander Vark, the most since the base gun you start with is far less powerful. I grew to rely on the machine gun’s rapid-fire mayhem. Other than that, you can also find other weapons, including a rocket launcher, electrifying Tesla cannon, and a devastating shotgun. All these weapons have limited ammunition, but you’ll increase your stockpile whenever you pick up another.

The upgrades are very helpful as well, and mix up your options. At the Armory, you can install chips that will allow things like a double jump, charged attacks, increased weapon ammunition, and much more besides. The only restriction to these upgrades is you can’t exceed more than 100 energy at a time, and each chip costs a different amount. If any cost 50, you know they’re vital. Such as the chip that increases the rate at which your Mighty Mode gets filled.

Dogs Of War Got Nothing On Him 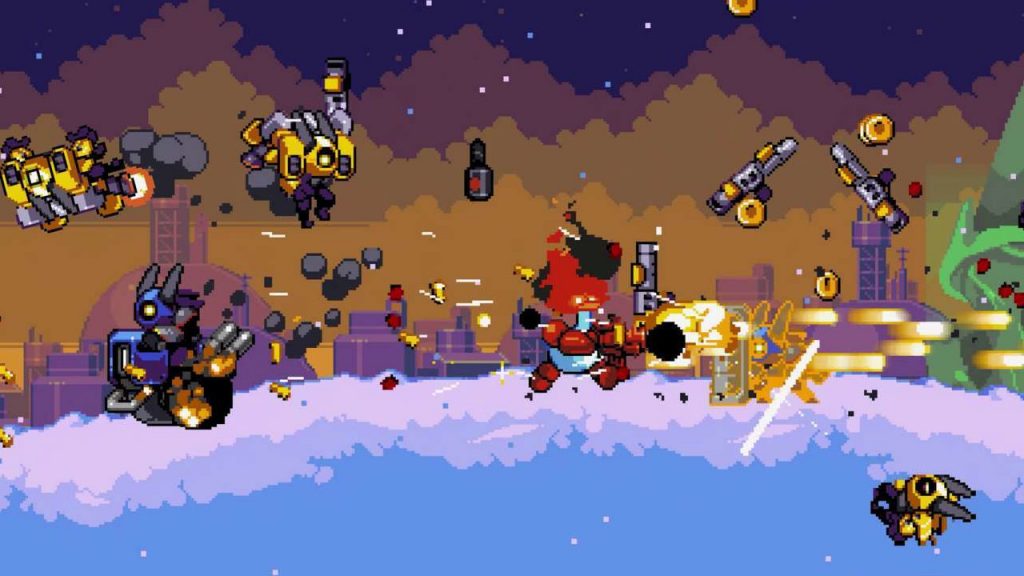 As you mow down enemies, your combo count will increase. By keeping the pressure on without interruption, you can get the combo incredibly high. Once the action dies down, that count will translate to how much your Mighty Mode meter gets filled. Once it’s full, you can press ZL and ZR to activate it. This makes you temporarily invincible and dramatically empowers whatever weapon you have equipped. Just act quickly, cause the meter, once full, will start to quickly deplete back to zero. Strategic use of this mechanic can and will save your butt, especially during the frenzied moments of the game.

Goosed Up and Ready To Go 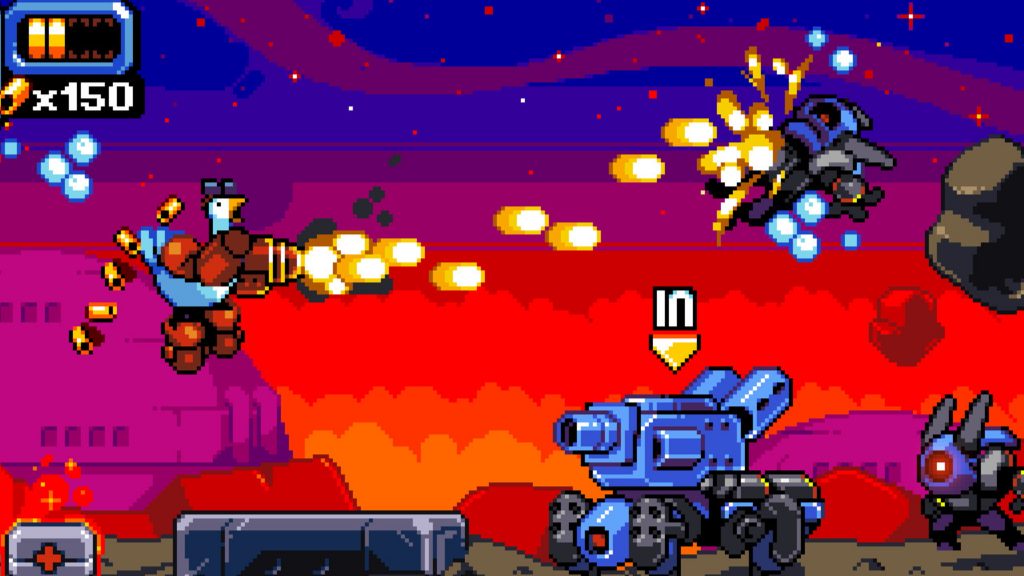 Besides that, you’ll also come across fantastic rideable vehicles. There’s a good variety, from walking mech suits to zipping motor vehicles to giant tanks and even spacecraft. These have their own health, so they’ll help protect you until they inevitably get blown to pieces. You might even find kits that repair damaged vehicles, at least if you’re lucky. Just keep in mind each vehicle works a bit differently, and they have their own weapons. No matter what you have equipped when you jump inside, you’ll be stuck with the vehicle’s default weapons. Some also have handy but limited use secondary weapons, such as bombs.

You can probably tell by now, the focus of Mighty Goose is the frenetic combat. It plays quite well and mostly seamlessly. You shoot in any direction by repeatedly pressing Y (though you can set it to autofire in the settings); shoot downwards to slow falls; press B to jump; and press A to do a dodge roll. The latter is vital since it gives you a brief moment of invulnerability. My only issue with the dodge roll is that I could never tell whether it was possible to roll past a foe or not. Many I would seemingly get stuck against and unable to roll past. Others it wasn’t an issue. I suspect this is an intentional design, but if not, I hope the devs are prompt on addressing this quirk.

Much to my surprise, there are also secondary weapons in Mighty Goose. Though the opening tutorials cover almost all elements of the game, it doesn’t mention them. I only discovered them by browsing through the Armory. These weapons vary dramatically, from rippling walls of fire to bombs you kick at foes. The only thing they have in common is each secondary weapon is activated with X and cannot be found in stages. Instead, you have them equipped from the get-go, and they’ll spawn more every few seconds. How long depends on the weapon, but they can be really helpful. Which is why I was a bit perturbed the game didn’t tell me about them.

Another similar issue is the in-menu shop. You’ll gather a ton of coins as you blast foes away, but I was initially unsure what they were used for. At least, until a loading screen informed me about the shop. These coins can only be spent by pausing the game, bringing up the shop, and buying a weapon. Then a crate will helpfully be delivered in front of you. 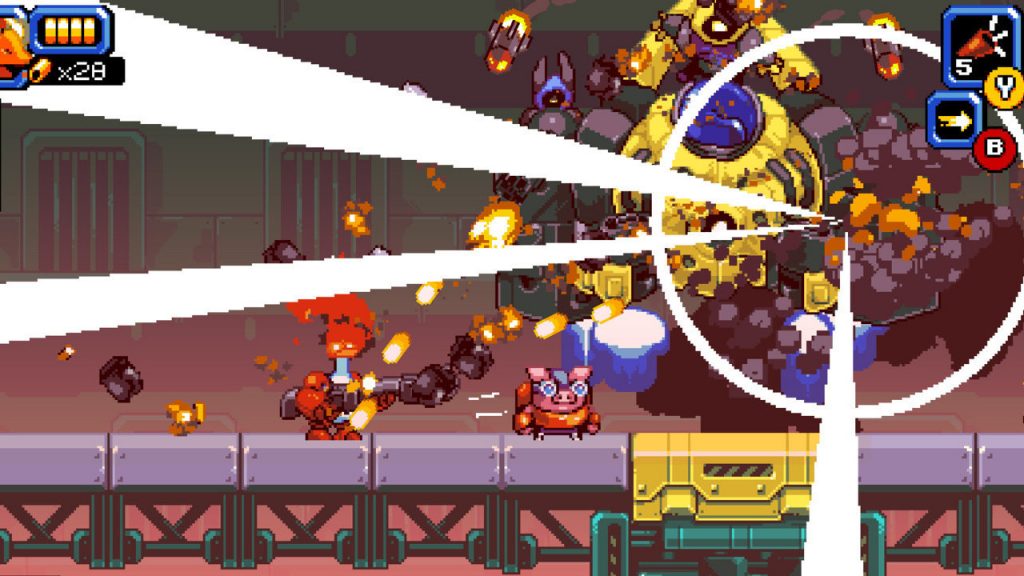 It wouldn’t be fair to talk about Mighty Goose without going into more detail about the bosses. Earlier I compared the game to Mischief Makers, and the bosses are a big reason for that comparison. Many of them are hulking robots with multiple phases, bristling with weapons and minions. Bosses range from robotic scorpion tanks to eldritch wizards, but don’t mistake the humanoid bosses for being softer targets. Cause none of the boss fights is easy, and they’ll put your timing and pattern recognition to the test. Hell, the very first boss of the game killed me a couple of times, if that tells you anything.

Mighty Goose is blessed with not only amazing artwork, but outstanding audio design. The artwork is courtesy of Richard Lems, who some may know from KUNAI. Though I loved the art in that game, I would venture it’s even better here. It’s colorful, detailed, and bursting with personality and humor. Likewise, the soundtrack by Dominic Ninmark is a pure delight. It’s bombastic and energetic, and each stage has its own theme. I especially like how the game takes a page from old arcade fighters and has an announcer loudly exclaim whenever you pick up a weapon crate. Honestly, the design is one of my favorite parts of the game, and it complements the action very well.

A Few Feathers Out of Place 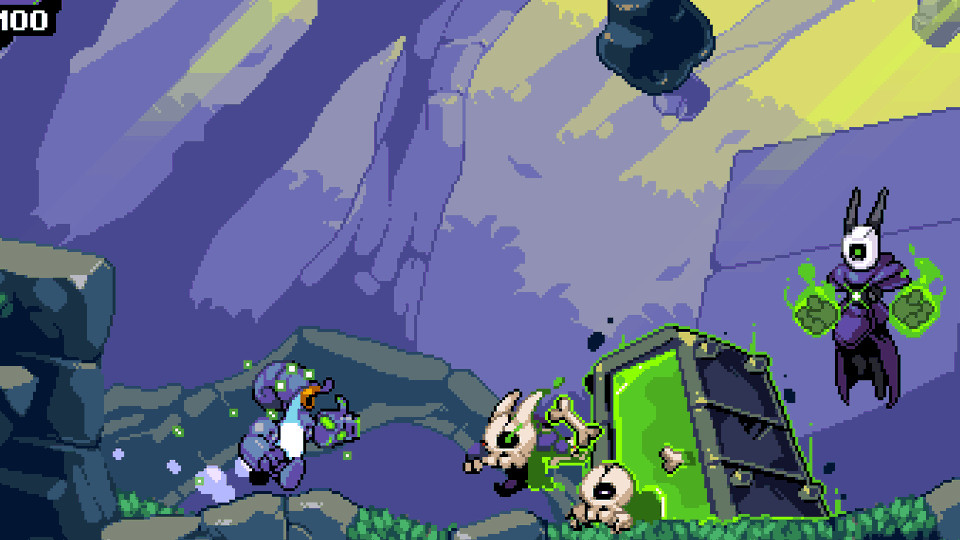 That’s a very interesting slug on your head there…

Though I really enjoyed my time with Mighty Goose, it’s not quite a perfect experience. There are a few reasons for that. One is that, much as I enjoyed the frenetic combat, it can be a bit much sometimes. It’s easy to miss enemy bullets or projectiles in the overwhelming waves of foes, and suffering a cheap hit. This is also because there are not more distinct audio cues for enemy attacks.

Of more importance are a couple of irritations I found. Each time you return to the game, it will ask you to set your default language again. Likewise, no matter the last level you played, you’ll always find your ship at the first stage on the map, forcing you to maneuver it back to your most recent stage. As you play the game, you’ll also find slowdown used to dramatic effect as you fight waves of foes. I really didn’t like this, since it often messed with my timing and always occurred unexpectedly. None of these are life or death, but they do keep an excellent game from being perfect. 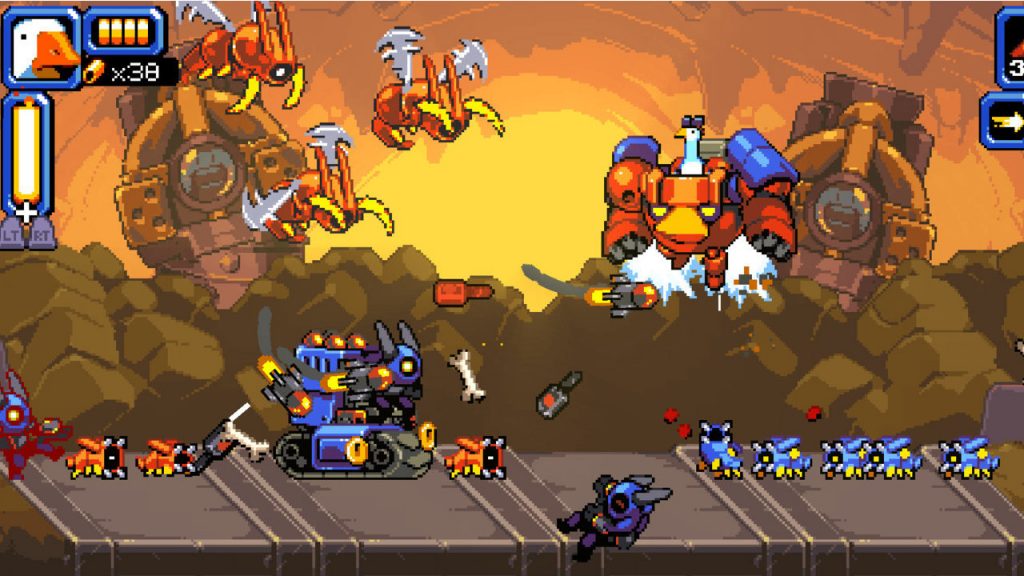 Once you beat the final boss in Mighty Goose, you don’t actually roll the credits. Without too many spoilers, you’ll unlock what’s essentially a hard mode afterward. The stages therein have far fewer health paks, more enemies, and harder boss fights. Despite this, I found that my appreciation for the game increased during this portion of the game. It was as if everything finally started to gel, and I even started getting better stage grades. My only disappointment was that after tackling all the post-game content, I wasn’t met with a true, overpowered final boss, a la the Kirby games. I guess I shouldn’t have expected that, but I truly thought that was the direction the story was taking me.

I truly enjoyed this opportunity to review Mighty Goose. Though the game veered just shy of perfection, it’s still a very worthy and enjoyable action platformer. I spent a handful of hours beating the game, and even then, I have a few extra things I want to unlock. While I do think it would have benefitted from minor improvements and wish it had some additional modes to keep me playing, it’s still a ton of fun. This is the perfect start to the Summer gaming season. Now I’ll just wait with bated breath for Blastmode to announce they’re working on an even bigger sequel! 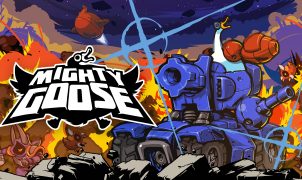 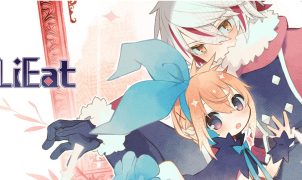