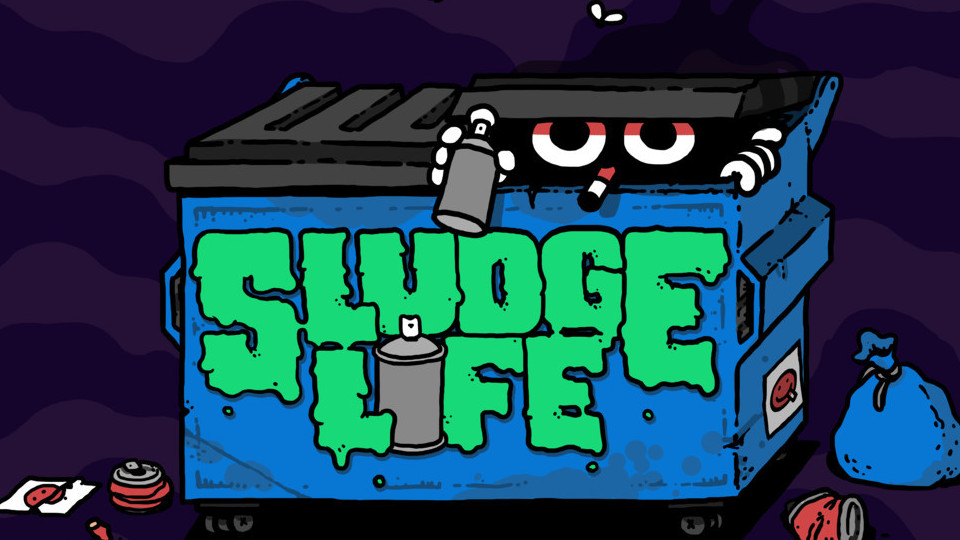 I’ve been waiting for the opportunity to review Sludge Life on Switch since I wrote for another site. And after finally spending some time with the quirky game, as well as reading HPP’s first review, I’m still not sure how I feel about it. Frankly, I can’t tell you if I love or hate Sludge Life. It depends on the moment you ask me. But since this is a review, I’ll do my best to showcase what the game is all about, and how it works on Nintendo Switch. 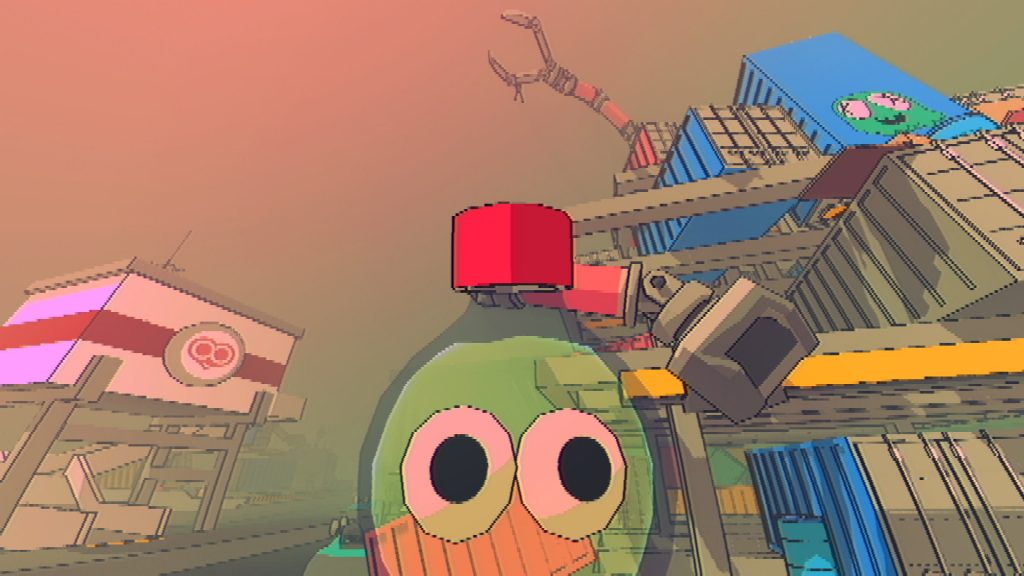 To say Sludge Life is incredibly strange is probably the understatement of the century. But it’s a good enough starting place to talk about it. Sludge Life takes pride in being absurd, offensive and even mind boggling. The game takes place in a world overrun by hideous sludge and corporate greed. Inhabitants mostly seem resigned to it, and try finding what fleeting joy they can in this decrepit society. You play one of those inhabitants, a tagger named Ghost.

I’d almost call the setting post-apocalyptic, but it’s actually a vision of late-term capitalism. There’s not a lot of direct storytelling, so it can be hard to be certain. What story beats there are all come from things you glean from individual conversations NPCs. These are just one off, and not evolving discussion trees. More often, you hear about how they hate pigeons or use sketchy yet powerful science to make abominations. That said, there are a lot of citizens to talk to, and put together they start to flavor your perceptions. Honestly, what you’ll get from Sludge Life is directly proportional to how much you get invested in the game. 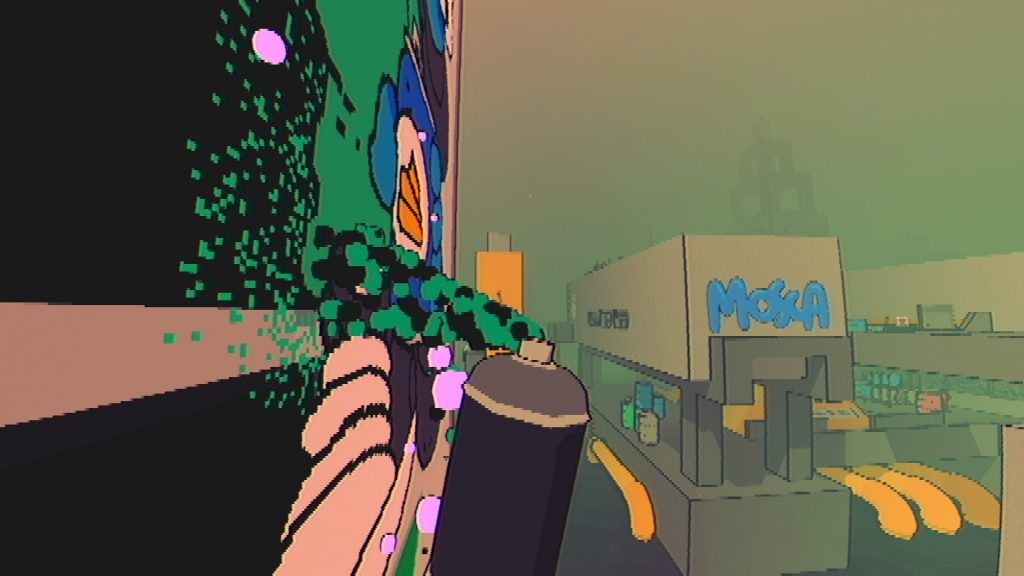 While Sludge Life can be beaten in a couple hours, your playtime may vary. For one thing, there’s no map in the game to help direct your adventure. For another, the game doesn’t really explain anything other than the very basic controls. And as someone that quickly became frustrated with Nintendo darling Breath of the Wild for similar reasons, I found this problematic. Your main goal is to tag various structures with graffiti. I wish this was something you had direct control over, like in Vandals, but it’s more about reaching predetermined spots and automatically tagging things with your trademark spectral signature. 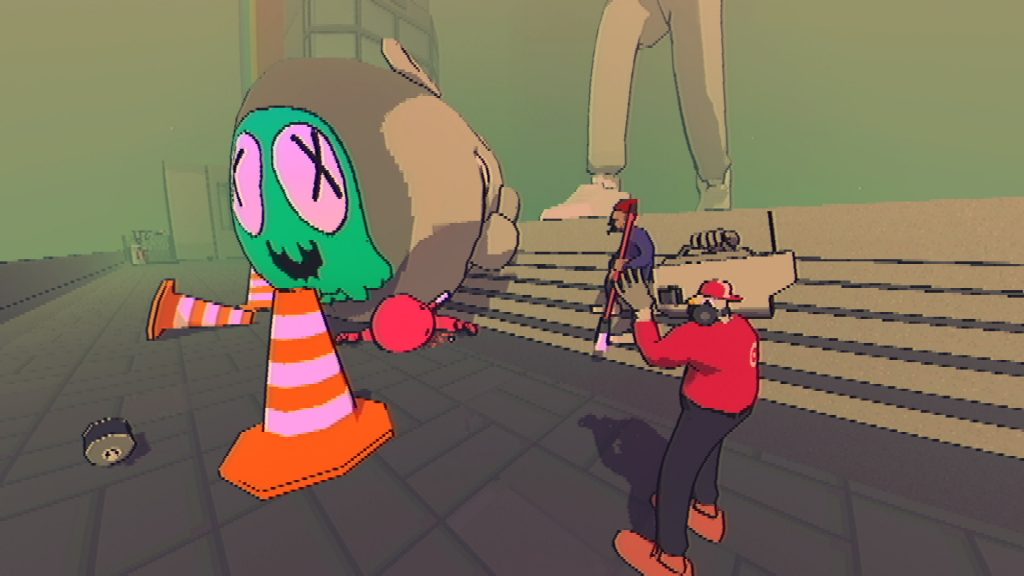 As you explore, you’ll also come across a handful of items to expand your possibilities. The ones I most enjoyed using were the camera and hang glider. Then there’s something called Vandal Eyes. The camera is handy since it lets you scope out distant tagging locations as well as taking photos. The hang glider is a life saver, letting you reach some of the lofty summits the game requires. And the Vandal Eyes? That item is essentially two eyeballs in a jar you can throw. At first it seemed they didn’t have any purpose. I actually had to look at an online guide to ascertain their function, which isn’t something I like doing in games. As it turns out, the sneaky eyeballs reveal places you can tag if you hold them aloft. Whereas I had tried repeatedly to use them as blunt objects, hoping they might open doors or something. They’re a great example of the meandering yet structured nature of Sludge Life. 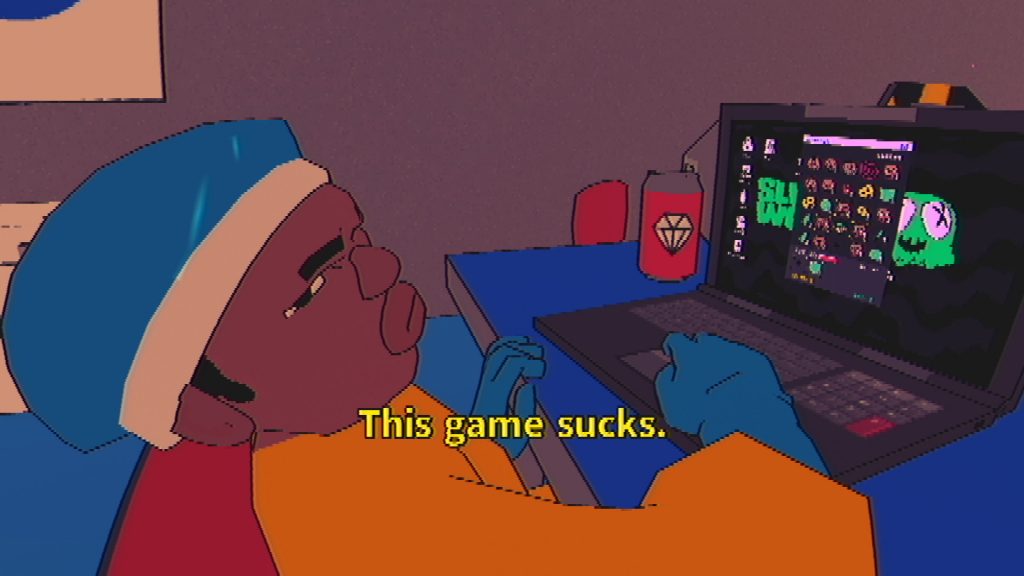 Besides the more constructive activities I mentioned, you also have other objectives you can accomplish. There’s a to-do list, and it lists things like smoking cigarettes, urinating off a tower, shooting a basketball into a trash can and much more. These tasks may sound mundane, but actually accomplishing some can be a real effort. I appreciate they’re all grouped together on the main menu, but that brings me to another issue – how Sludge Life is optimized for Switch. 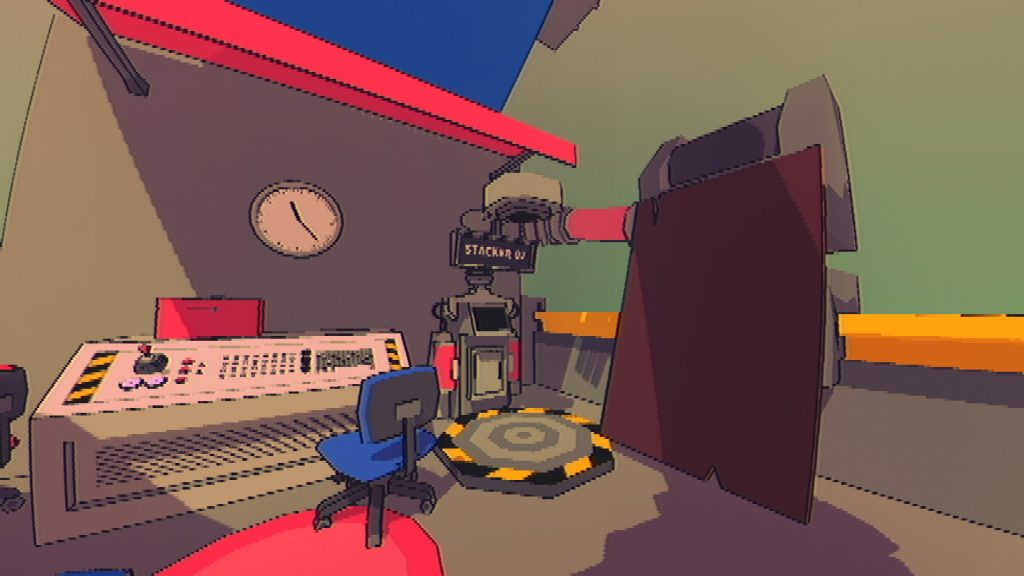 From the moment I started the game, it was clear it was meant for a mouse and keyboard setup. The main menu actually has a cursor you have to move around, much like interacting with a virtual computer. It was a little awkward doing this with Joy-Con, especially since I encountered some stuttering issues just reading through various menus. It’s not horrible, but I wish the developer had spent additional time making a more optimal setup for the Switch. 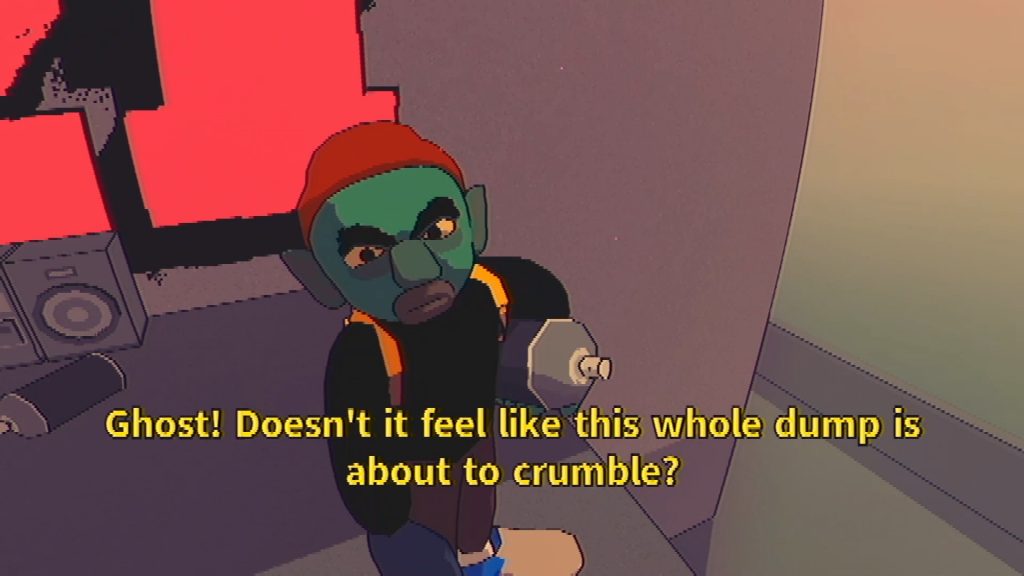 I think perhaps my biggest issue with Sludge Life is the awkward platforming. The whole game is basically a 3D platformer, but from a FPS viewpoint. This can make navigating narrow structures very challenging, and it’s frustrating when you inevitably fall into the muck, forcing you to retrace your steps. Additionally, the physics can be a bit unpredictable. More than once I tried jumping to the roof of a building and somehow squirted through a narrow opening underneath it instead. Sure, there’s a handful of teleporters to ease navigation somewhat, but I am a stickler for precise platforming. Though it’s easy enough to jump, crab walk through apertures and move the camera around, I found the platforming just as unbalanced as the rest of the experience. 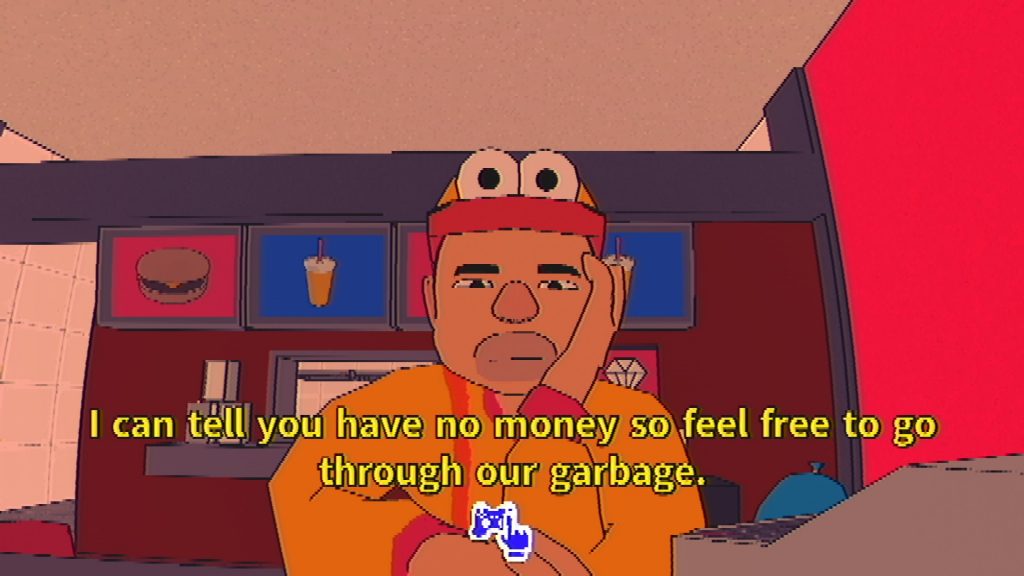 That said, I did find a lot of beautifully weird moments throughout the experience. I didn’t realize you could get hurt in the game, but managed to wind up at the hospital a couple times. Once cause I impatiently jumped from a tower to crash into the concrete; another time cause I got too close to a snake in a toilet. It’s also oddly satisfying talking with crazed NPCs and slowly piecing together the fabric of this world. Or booting up my virtual PC and playing Crypt Creeper. Hell, I even enjoyed taking shots on the basketball court and talking with my fellow taggers. I just wish those moments weren’t so interspersed with aimless wandering. Weird can only take you so far when you feel rudderless and lost.

Power to the People? 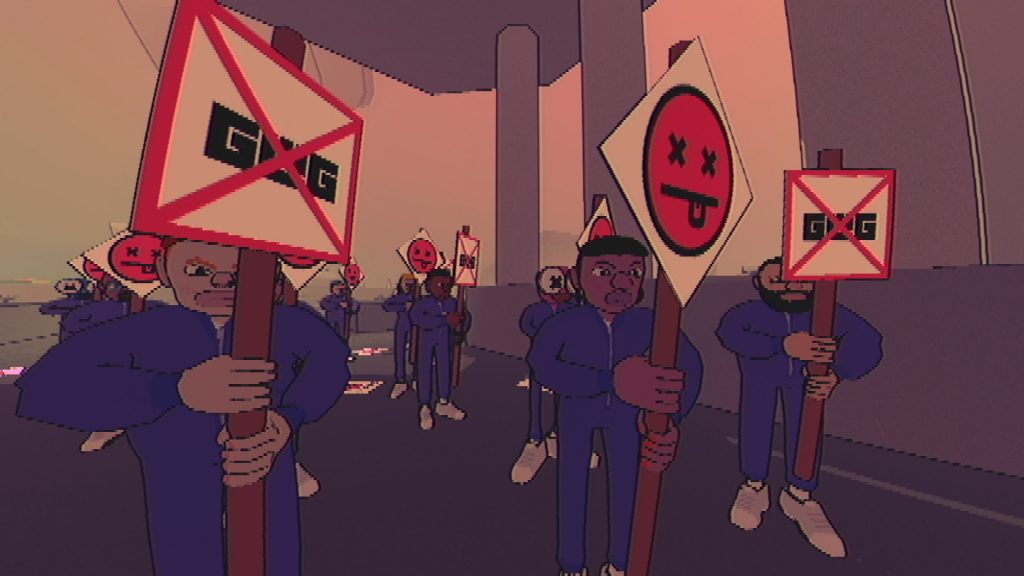 Visually, Sludge Life works quite well. It’s both colorful and yet unclear. The edges blur, and you question your eyes. This is all purposeful, mind you, and it works well on a console that’s not obsessed with graphical fidelity. The music, however, drove me nuts. Most of the game is wandering around in silence. But then you’ll find pockets of music and humanity close by. It’s a curious choice, but I suppose it helps the game continue to stand out as unique.

I think that Sludge Life is a great example of video games as art. It’s much more concerned with sharing its style than being a cohesive whole. Which isn’t to say it’s all nonsense, I don’t think it is. But what it actually is? That’s entirely up to your interpretation. If nothing else, I appreciate Devolver Digital continuing to share their brand of unusual and quirky published games. And as a longtime Nintendo fan, it’s nice seeing something this crude and mature on one of their consoles. I just still don’t know how highly I can recommend the game. But if you want to take a chance on something unique, look no further.