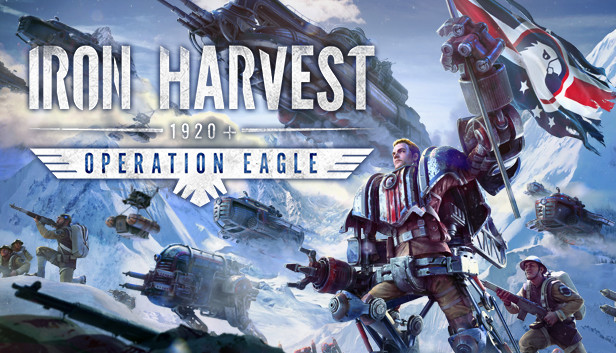 Iron Harvest dared to dream of our first World War with an extra helping of heavy-duty mechs. In a Call of Duty-meets-MechWarrior-meets-Command & Conquer collage, publisher Deep Silver spared no expense showing us what WW1 would look like with a bit more mechanical flair beyond the expected tanks and planes. In this tasty little expansion, we venture away from Europe and Russia to see what the red, white, and blue has been up to. Has the US of A stayed true to its pride? Or does Iron Harvest: Operation Eagle fall apart on the ride? 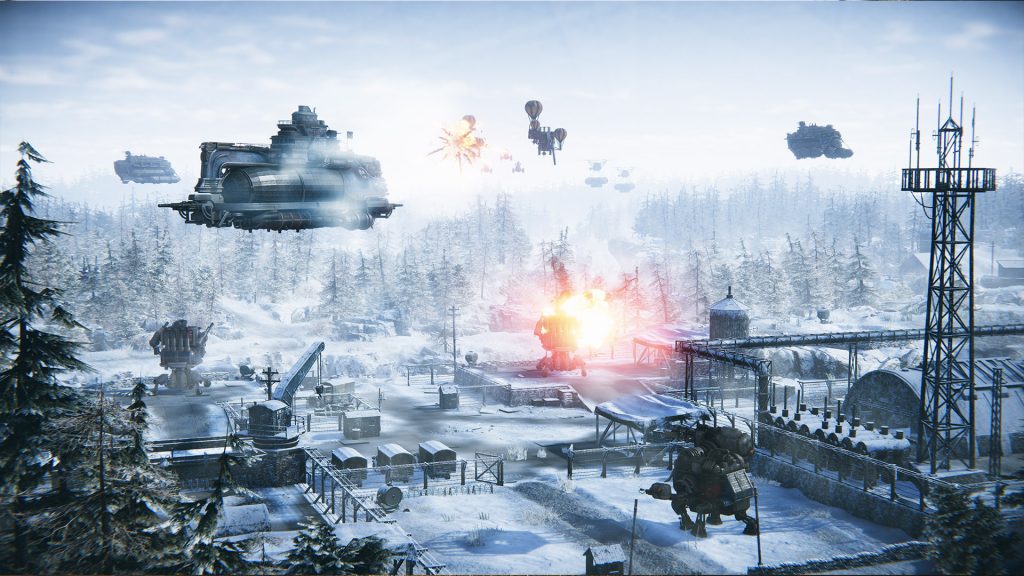 Let’s start on what a good chunk of people came here for: the Mechs. I still love the spindly, rustic, clunky designs. They remind me so much of classic machines that I’d almost wonder if these mech designs were inspired by an old prototype car. From the Salem’s tractor-like grill to the conservatively designed floating howitzer known as the Gunship, there’s no shortage of firepower when it comes to American-made, heavy metal monsters.

I was a bit mixed on some of the units. A stealth artillery unit? I questioned why good ol’ loud ‘n proud ‘Murica had something like that till I managed to get a Revere across a draw bridge just enough to reveal a few gunners with that hefty thing just within striking distance. The rumble of the bass as the fireworks turned three gunner squads into frozen mulch made me give a look of sheer horror. Or maybe delight; I can’t rightfully remember anything other than it being freakin’ awesome.

Another useful little helper is the Paratroopers and the Airlifts. Sometimes hoofin’ it just doesn’t work out all that well, especially when the enemy is horribly entrenched in an area. So the best solution is to just go over it! You can use the Airlift to help fly an appropriately sized ally (sorry folks, no airlifting a Salem) straight over enemy lines. I was impressed with how much of a beating those things can take, surviving in the thick of a battle for a hot minute before collapsing.

The real winner of the gun show here is definitely George Mason’s command ship. That heroic hulk of a machine-made my jaw drop the moment it was rolled out. Even imagining a US battleship in the sky doesn’t do this thing justice. It is the thunder and fury of American prowess ready to cave in the enemy with an entire army’s worth of firepower rolled into one slick, sweeping, skyborne shell. This is the stuff of American dreams right here, and Mr. Mason is not about to let you forget that. 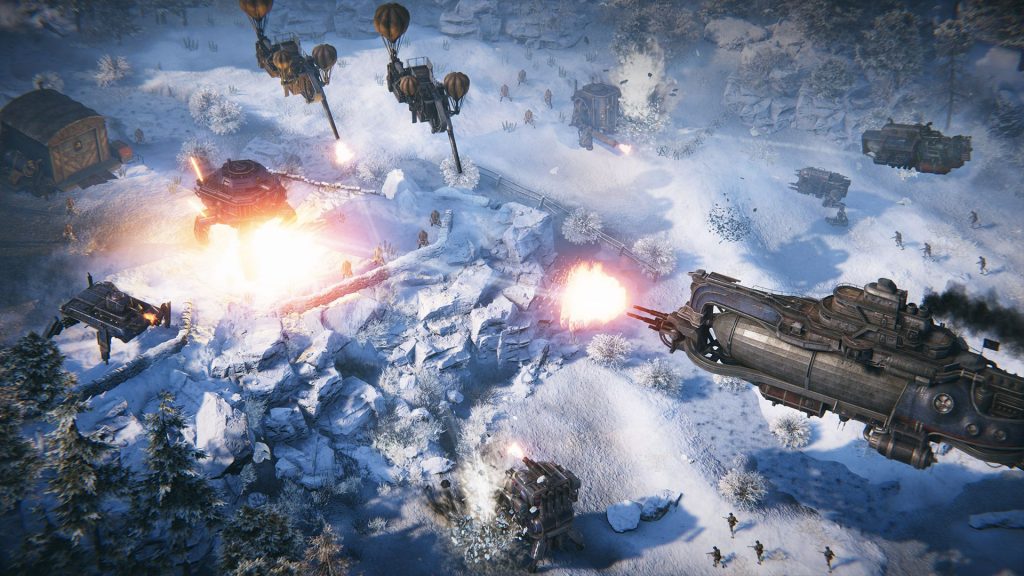 The first hero you’ll come across in Operation Eagle is William Mason, a man with a mech suit and a high-yield howitzer. His main ability is using these mechs for all their worth, whether that’s departing one to turn it into a turret or summoning a fresh one in from a sky-drop for extra firepower. He’s a great happy medium between utility, firepower, and survivability. If he drops all of his health, all he loses is his suit, and he’ll get his health back and be ready to move out and away. Just don’t expect a single-unit army out of him in that form.

The second is Sita Al-Hadid, the eagle-eyed sniper that uses a falcon for spotting, which means a far larger viewing range. Adding to that, you can task that falcon to follow enemies so you can always know what they’re up and who they’re with. She’s not the most well-armored, but if she gets into a scrape she can’t handle, she can summon Hashashins that’ll cleave apart enemies with their swords.

The final one is George Mason, and he is bar-none the most impressive of the bunch. You probably won’t need much more than him and his giant, imposing airship. That vehicle is lined to the brim with firepower, from front and rear howitzers to an underside flamethrower. That airship isn’t a glass cannon either; that thing’s well armored and is gonna take a lot of firepower to bring down, assuming it leaves anything standing at all. That thing is slow, but you don’t need speed to show your foes their impending death from above.

With Liberty and Justice for All 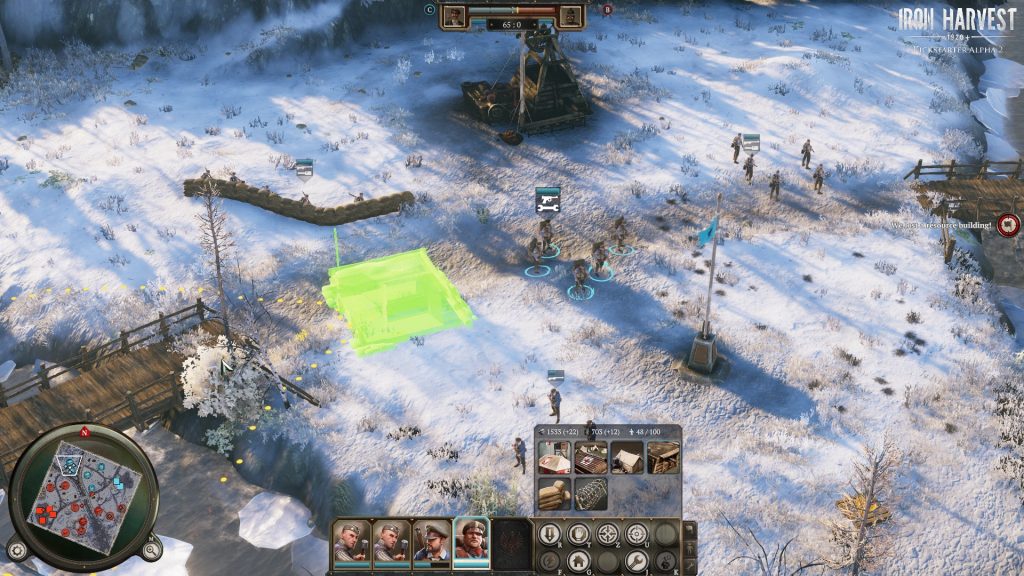 Normally I’d be paying little attention to the cinematics (as much as I enjoy a good RTS, the stories usually were secondary to how it played), but much to my surprise, it holds up well. I wasn’t super invested in the characters, but their classic American ‘oorah enthusiasm was far less stereotypical cringe and more cohesive and flavored by the time period. The soldiers look bog-standard, but I kind of think that is a good thing for the time period it emulates. There is nothing wrong with stripping it down, and even their guns look like modified BARs, which is absolutely appropriate for the time. Emulation of the era is key, and on all fronts, I’d call this a well-earned victory.

The story starts with a run over to Alaska, where the Rusviets have decided to capitalize on our capitalism by seizing the means of production of oil and steel. Well, our hero, Captain Mason, doesn’t appreciate the encroachment on our rightful ‘Murican property! Out to the brutal, whipping winter of Alaska, where you’ll be treated to a wicked airdrop by Mason. While the first mission will be a bit brutal without having any mainline base to work with, it helps set the stage for how this campaign will be. It’s not entirely here to hold your hand, though it will greet you with some basic tutorials, albeit rapid-fired, though they’re pretty digestible. If you’ve played any other RTS games, you’ll be able to grasp the gist of the nuances here without much issue. I won’t go too much further from here. The campaign’s a doozy that’s better off not spoiled, even if it was a bit short-lived, though still a good several hours of content.

So if you’ve got a taste of blood and metal in your mouth and have a fever for retro-futuristic patriotism, look no further. Operation Eagle soars when it comes to getting a shot of pure freedom juice in our favorite full-metal mech warfare. While somewhat short and a bit heavy-handed getting you ready for the fights ahead, it does its best to be a shining example of quality DLC to an already awesome RTS game. Rise to the fight with Iron Harvest: Operation Eagle, out now on Steam!

Interested in seeing the review for the original game? Check out our review here!

Hope ya’ll have a fantastic Memorial Day, and be sure to give a salute to our heroes in uniform! This is Cory from HPP, signing off!