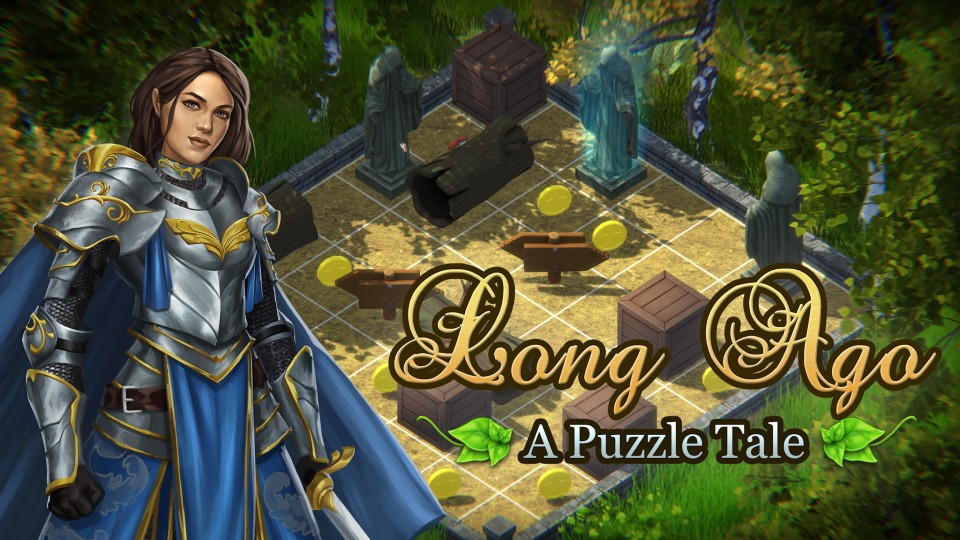 There once was a girl who dreamed
That life could be more than it seemed
To be free like the birds in the sky
She told her father: k thx byeeeee.

And that is my subpar poetic rendition for Long Ago: A Puzzle Tale’s epilogue. It’s a classically styled rhyming fairy tale about a princess who wants more than her boring, sheltered life. So, throwing caution to the wind, as well as the status quo, she escapes her royal trappings for life and adventure. There’s excitement, drama, comedy, and everyone learns important lessons about life along the way.

The Ball is the Hero 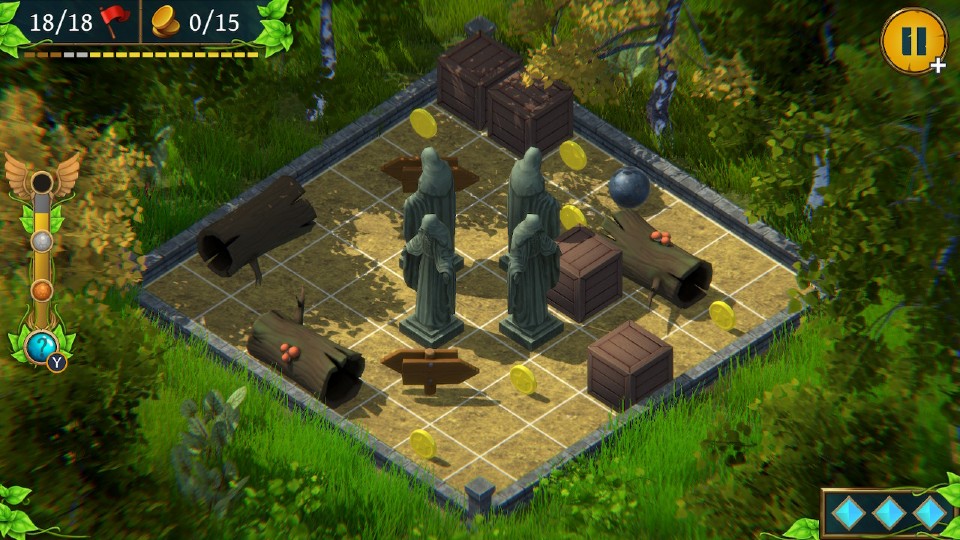 Despite that setup, Long Ago: A Puzzle Tale isn’t about any of that. It’s actually a puzzle game in which you roll a ball. Said ball keeps rolling until it hits an object. You have a strict move limit, and your goal in each story level is to collect all the quills without going over that limit. In the optional coin levels, the goal is the same but with coins. It sounds simple to collect everything, and it is at first.

There are six story levels in each of the game’s five chapters. These levels act as a brief tutorial for that chapter’s mechanics. Each chapter adds additional obstacles and complexities that makes the design far more complicated. For instance, in chapter one, there are diagonal signposts that immediately bounce the ball in a different direction when struck. Hollow logs obscure collectibles, and monk statues have to be hit to make additional items appear.

Completing a story level nets you three gems. The coin levels are structured a little differently; there are bronze, silver, and gold difficulties and the reward for each is one, two, and three gems, respectively. Gold requires the fewest number of moves, and the margin for error is nonexistent. Gems are used to unlock additional chapters. A bronze in each coin level is necessary to access all the levels, so accomplishing the bare minimum will get you pretty far.

Your Brain is the Enemy 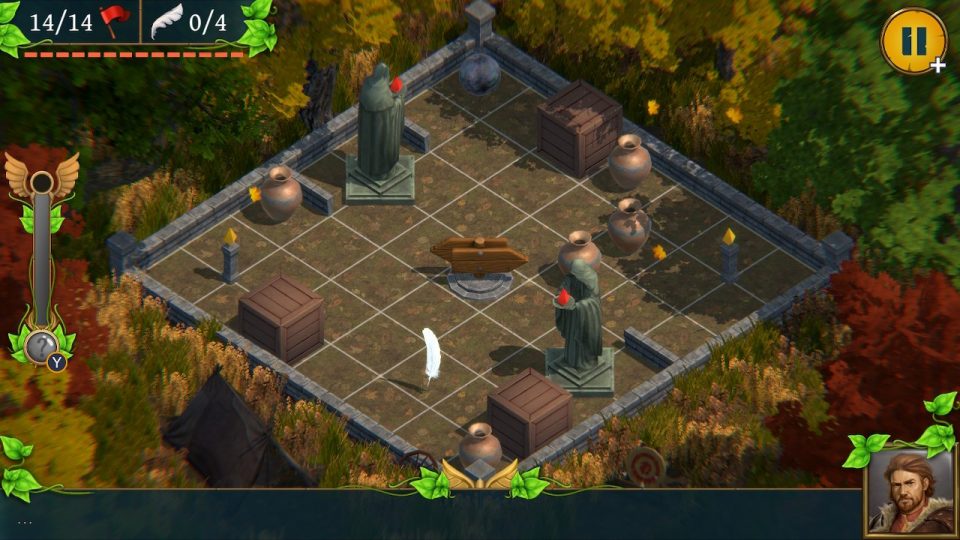 The difficulty level ramps up at a fair pace, but the game is never unfair. There’s no time limit, no penalties. It’s just you and the puzzle. So, if you suck at it, at least no one else can bear witness to your shame. Feel free to feel terrible about yourself, though. I did on some of the more complicated levels. I didn’t have any problem getting bronze. Silver is difficult, but gold is just insane.

I won’t spoil all the surprises because there are a few that actually caught me off guard. I’ve played plenty of puzzle games in my day, but Long Ago: A Puzzle Tale has a wonderful variety of obstacles with which to contend. There are portals, rotating platforms, locked doors and switches, and chests that have to be struck from the front to open. That’s just a sample, though. Each chapter’s twist is as surprising and engaging as the last.

As a side note, I will admit that the campfires were the bane of my puzzling existence. The ball stops dead in its tracks when it hits one. If that wasn’t bad enough, coins usually appear all around the campfire, which means you have to find some way to backtrack to pick those up. I just could not wrap my mind around it. I’m sure I could have solved it in probably forty moves or more, but that’s not really the goal of the game, is it?

Hints for the Humble 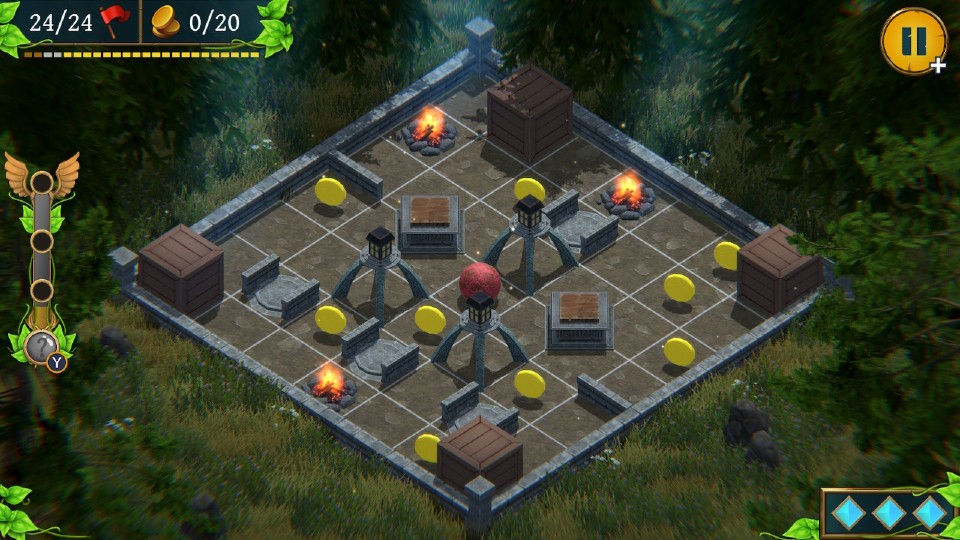 Fortunately, Long Ago: A Puzzle Tale has an optional hint system. There’s a meter for it that builds up over time in each level. In story levels, it will show you the exact path to take, step by step, to get all the quills. In the coin levels, it will show you the steps for bronze, silver, and gold, depending on the meter’s fullness. Every time you push the Y button, the game will tell you in which direction the ball should roll for that move. You can keep pushing it all the way until the end if you want, but sometimes just getting the first move is enough to guide you in the correct direction. It’s a great addition that makes the game accessible to everyone.

There’s a total of 30 feathers, 240 gems, tons of coins, and a total of 80 levels. The story levels are also replayable as coin levels. The ball’s starting point and the correct path are totally different from the story versions. That really brings the total up to 110 levels. It’s a healthy amount of content for a puzzle game, and the actual playtime is based on how good you are and how frequently you cheat get help. It took me about eight hours to collect everything, and yes, I needed help with the campfires. 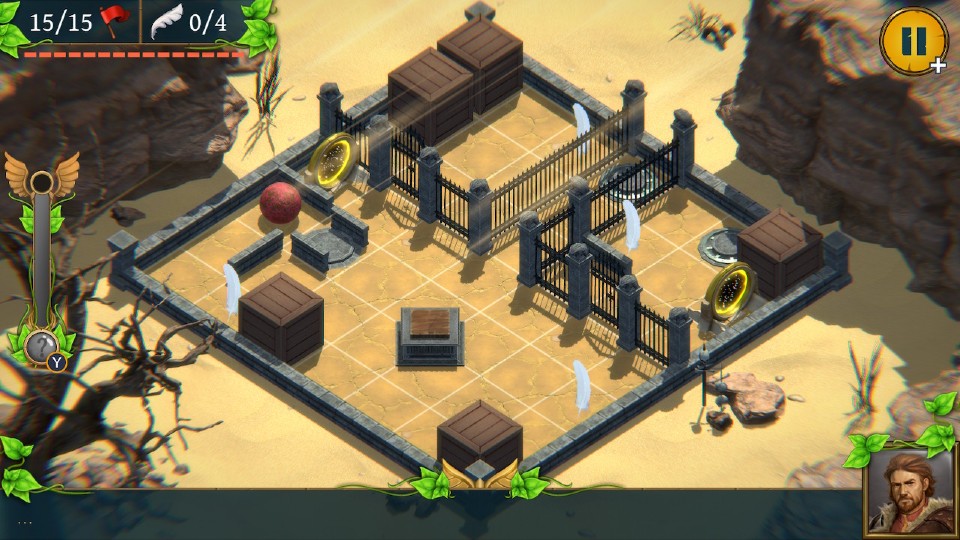 As much as I enjoyed flexing my puzzle-solving muscles, a few design choices hampered the experience. While I like the hint system’s flexibility, its time-based functionality can be frustrating. If you’re stuck on a coin level and you’re trying to get gold, all you can do is keep trying while you wait for the meter to completely fill. It’s especially irritating when you keep missing the gold by one move. This seems like an opportunity to use all those coins you have to collect, but those are only spent on different colors for the ball, which is underwhelming.

The game’s puzzle design is mostly beyond reproach, but each chapter’s mechanics are more self-contained than I expected. Some obstacles such as the signposts, rotating platforms, and the like appear frequently throughout the entire game, but many of the unique mechanics are only found in their respective chapters. I was expecting to see a few puzzles that tied all of the elements together, but it doesn’t play out that way. 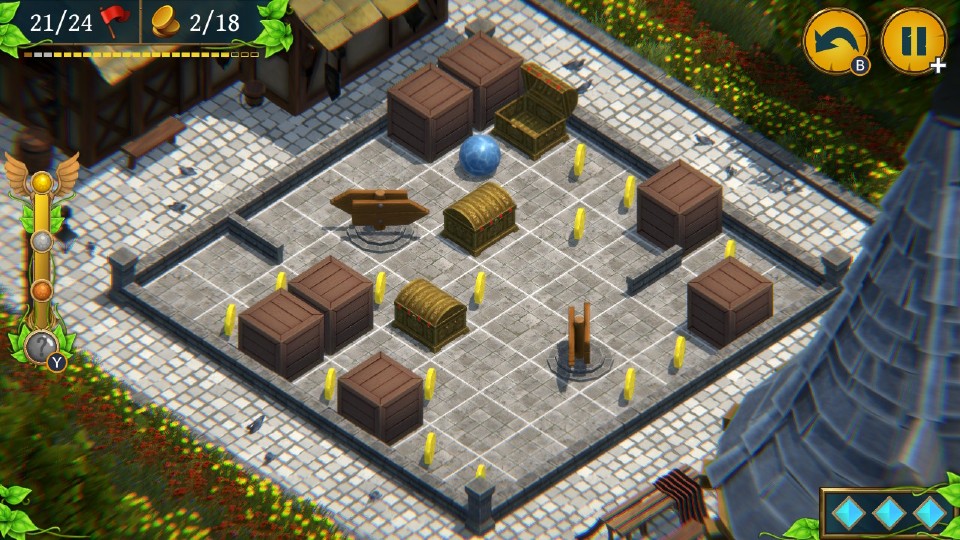 I began this review with my terribly written poem because Long Ago: A Puzzle Tale does have a narrative. Its fairy tale is written in rhyme and fully voiced. Each quill you collect in the story levels writes a part of the story. It’s a fun detail, even if the story itself is short and nothing groundbreaking. The environments are well detailed and peaceful, even if you don’t focus on them while puzzling.

The soundtrack is a folksy mix that reminds me of Final Fantasy: Crystal Chronicles. Oddly enough, there are even vocal tracks. They kind of remind me of Sarah McLachlan, but they fit with the rest of the songs. In addition to the soundtrack, nature also provides some music and scenery; flowers dance in the wind, birds gently chirp, sand blows across a desert landscape…The game’s presentation is nothing short of inviting. This soothing design helps alleviate some of the frustration felt when you just can’t quite get the gold.

That said, there’s a startling disconnect between the narrative’s production and the gameplay. They have nothing in common at all. I’m not penalizing the game for this because a puzzle game doesn’t inherently need a narrative; however, it’s clear the developer put a fair amount of work into the story’s rhymes, the voice work, and those vocal tracks. I’m not sure all of that was necessary. The gameplay stands on its own just fine. I guess if you want to get literary about it, the game is an allegory. The princess is the ball, and the obstacles are life. Isn’t literature magical?

A Puzzler for Everyone

Long Ago: A Puzzle Tale is an accessible, inviting puzzler with a wonderful variety of mechanics that will absolutely test your puzzling skills. It’s a no-brainer for puzzle aficionados, even if everything doesn’t quite come together in the end.