From Garbage Thief to Action Hero 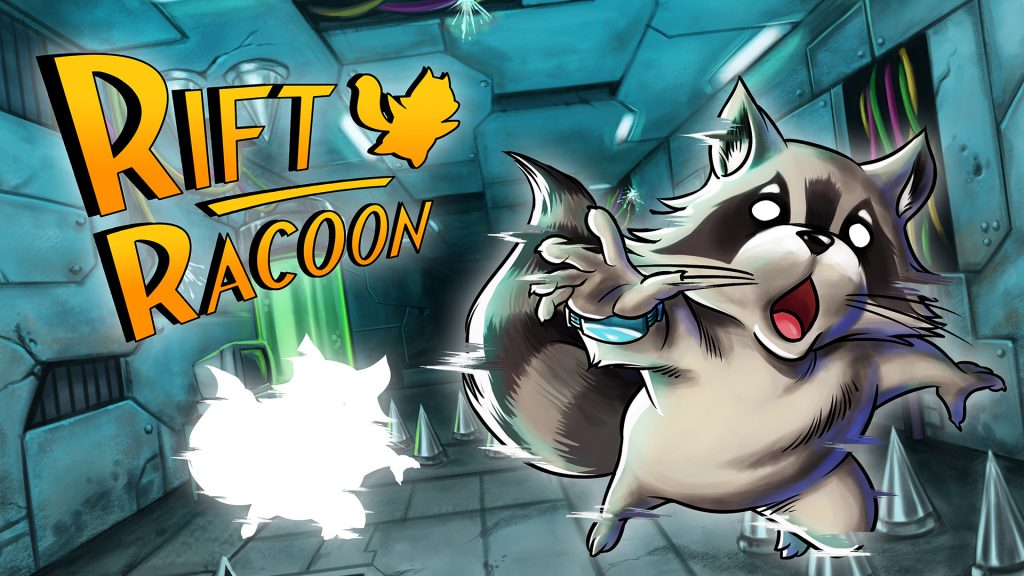 I’m generally willing to tackle anything that pays homage to old-school games. Especially when the premise and artwork appear charming. That’s why I decided to take a gamble on Rift Racoon. Developed by Ratalaika Games and Marcos Game Dev and published by eastasiasoft, it seemed like a good bet to take. The game is basically a standard platformer with a hardcore focus and the ability to warp around as nature’s most annoying garbage thief. Unfortunately, what I found myself faced with was a game that had potential, but which was dramatically hurt because of its execution. 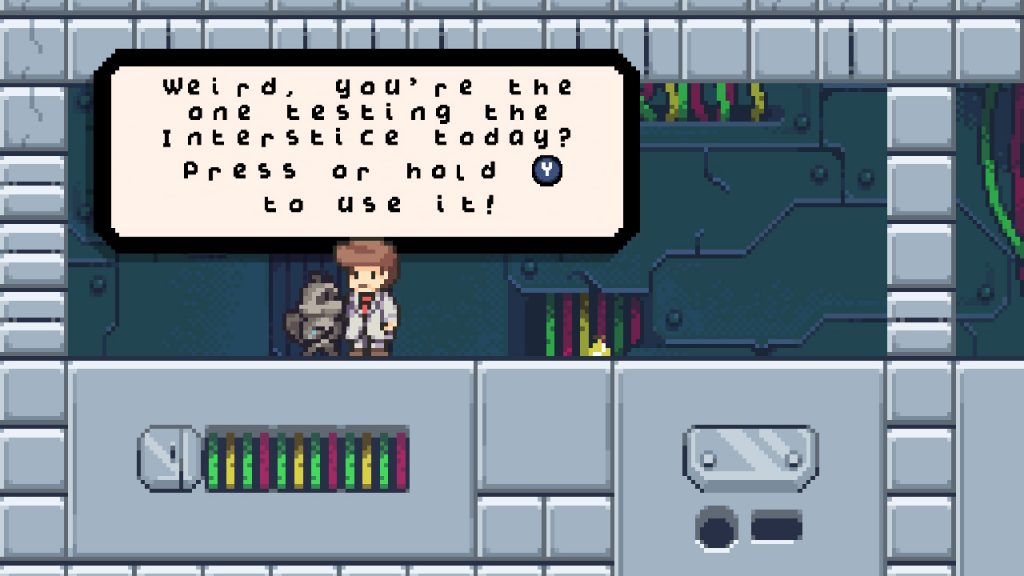 Going from the game description, you play Tucker the raccoon. Through a series of unfortunate events, he finds himself armed with experimental technology that allows him to teleport. The scatterbrained scientists that work at the facility seem nonplussed by this development, which surprised me. God knows raccoons are a constant annoyance in my life, and that’s without the ability to warp through solid matter.

Regardless, this sets the stage well for the basic gameplay loop. Tucker jumps, climbs, and warps through each level, just doing his best to survive, which is a challenge, since some sadist left spikes and traps everywhere. And though you can play on Easy to withstand one fatal blow before dying, I foolishly chose to play on Normal, where one hit kills you. Suffice to say, it’s a good thing Tucker had infinite lives.

Though I don’t mind challenging games by default, that acceptance is determined by how smooth and precise the controls are. Take any platformer out there, and I think most gamers will agree that controls make or break the experience. At first, I thought Rift Racoon had satisfactory controls. It’s not hard to run and jump around. Although the climbing mechanic is tricky, since Tucker loses his grip and falls after a few seconds, it seemed manageable. But then Tucker got his warp armband. 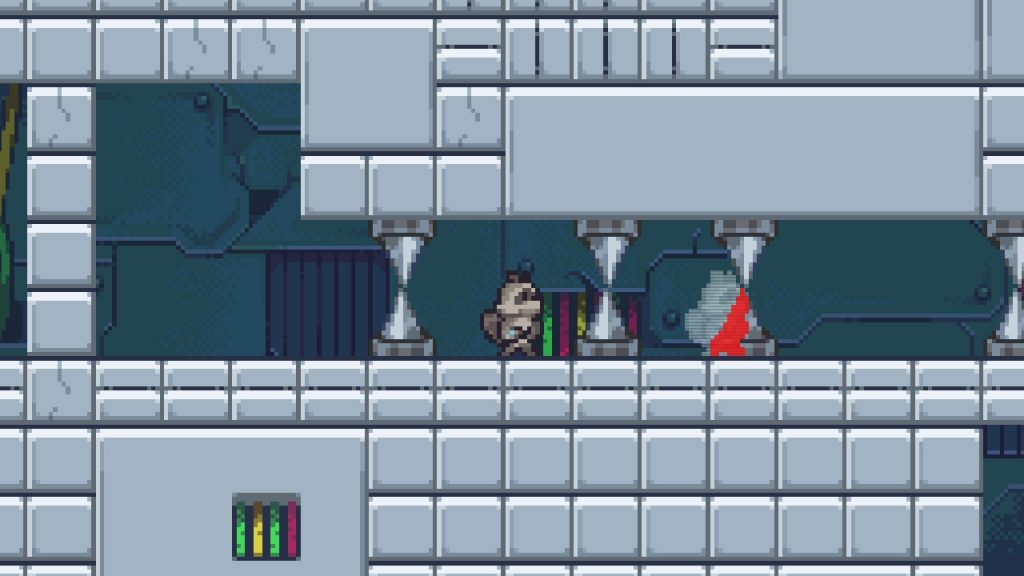 You might think the ability to teleport through solid matter makes any protagonist overpowered. You’d be wrong here. Reason being, it’s incredibly easy for Tucker to kill himself by teleporting. If his body makes contact with solid matter, he’ll die instantly. There’s some wiggle room for this, but not much. Though you do see a preview of where he’ll teleport, most of the game is so fast-paced that it’s easy to misjudge a warp and end up pulped. 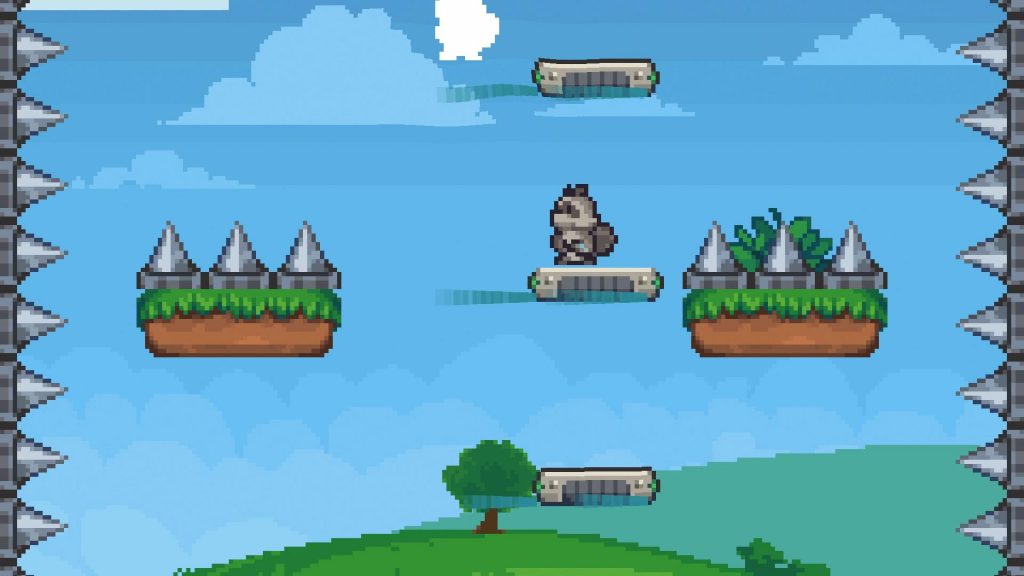 Even that would be easier to forgive if the controls were smoother and more intuitive. Unfortunately, warping is a bit awkward. You have to hold the Y button, displaying the warp preview, then orient that around with the D-Pad. You’ll automatically default to warping straight ahead, so you have to manually hold the D-Pad up or down to do anything else. This all takes a fraction of a second, but again, the game is very fast-paced.

Worse, Tucker’s physics are a bit wonky. Though it makes sense for a raccoon to have the grace of a lead balloon, it can make the precise platforming required by the game tortuous. And while there are checkpoints to help this somewhat, I found they are few and very far between. Most stages have maybe one checkpoint, and usually only after an especially hazardous stretch. Some don’t appear to have any checkpoints at all. Though generally shorter, these stages were really a pain. It’s also good to keep in mind the game difficulty ramps up quickly and doesn’t really ease off at all. They’ll introduce tons of new mechanics, but instead of helping, they just add to your anxiety. 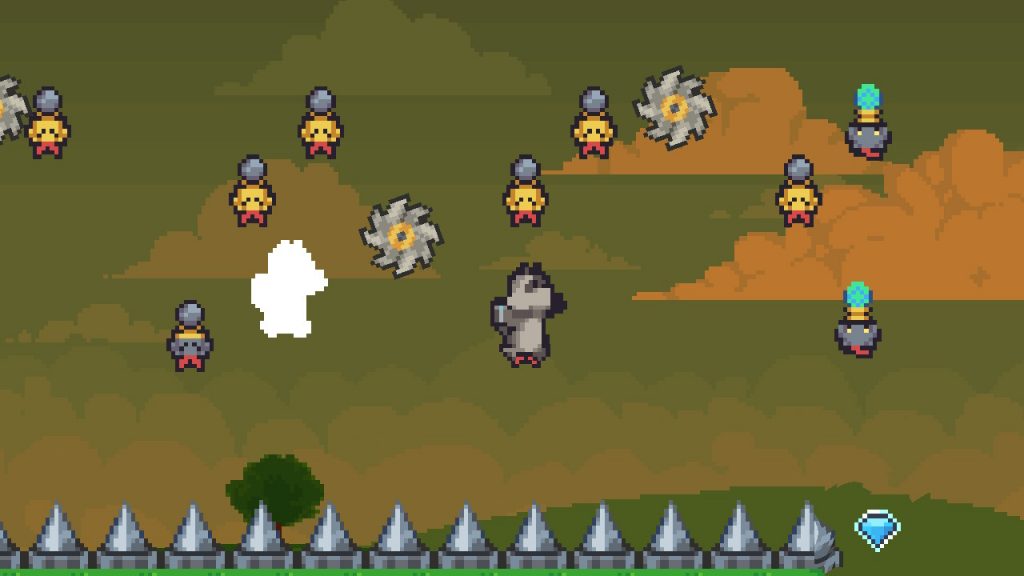 Perhaps my least favorite mechanic is the warp extenders. These little robotic devices have a lightbulb that glows above their head. By touching them, you’ll refresh your warp, with the idea being to keep your momentum going over long stretches. Here’s the problem with that. You can’t just touch any random extender to keep going. You have to hit them in a specific order they’re lit up in. The worst example I have of this is one section of extenders over a spike pit. You have to hit them all in a winding order, moving forward, then back, and then forward again to escape. If you don’t hit each extender perfectly, Tucker falls to his immediate death. I definitely got PTSD from these sections in Rift Racoon. 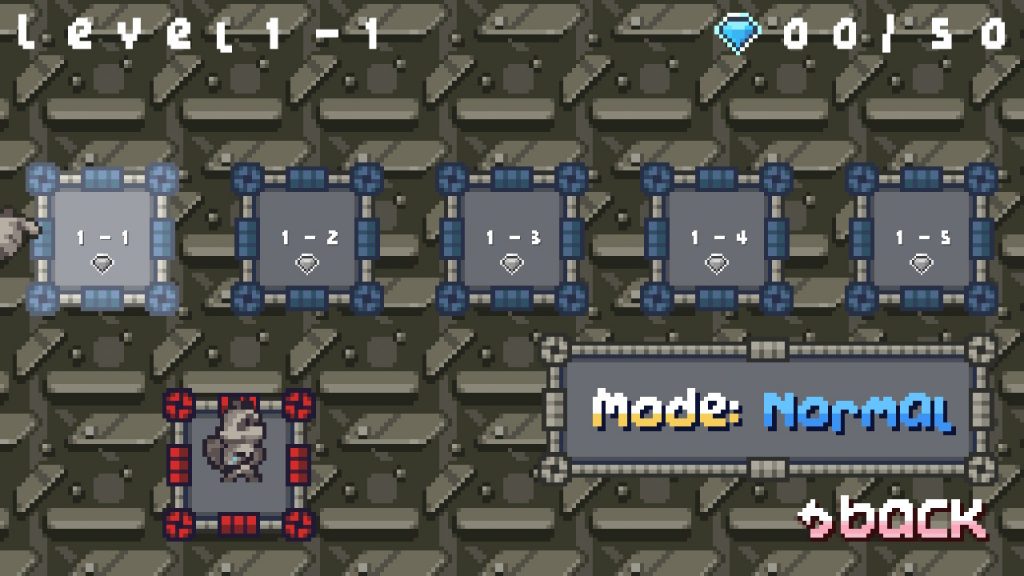 With 50 punishing levels, at least you’ll get your money’s worth.

Though most stages are pretty straightforward, Rift Racoon mixes it up with optional diamonds you can collect. There’s one in each of the 50 stages, and by collecting enough, you’ll get color swaps for Tucker. I frankly didn’t feel this was remotely worth the effort to get the diamonds. Especially since many of them are placed before the checkpoints, meaning one error, and you’re back at the beginning of the stage. When you find yourself dealing with warping and climbing through sections full of floating buzz saws, spikes, platforms, and all manner of death, those optional diamonds become more and more frustrating. After a dozen or so stages, I stopped caring about them at all and just raced to the finish line.

The best feature of Rift Racoon is the visual style. It won’t appeal to everyone, but I felt it was colorful and nostalgic of the SNES era of gaming. That said, there is one problem with the artwork – the overuse of themes. Most stages look pretty much identical to any others of the same sort. Lab stages, forest stages, they all start to blur together. The music design is fine, and mildly dreamy sounding, though nothing life-changing. Put together though, the design of the game is its high watermark.

Scrounge For Something a Bit More Appetizing

I hate to sound so down in the mouth about Rift Racoon. I was just hoping it would be a lot more enjoyable than I ultimately found it. If you don’t mind an excessive challenge partially contributed to by awkward controls, you may still find something to love here. For everyone else, though, you’ll want to shoo this raccoon away.

Beating you over your head. Since the release of Super Meat Boy, the model for the sadistically-hard platformer archetype has gained more and more of a following. It’s frustrating,…