Put a Stake In It 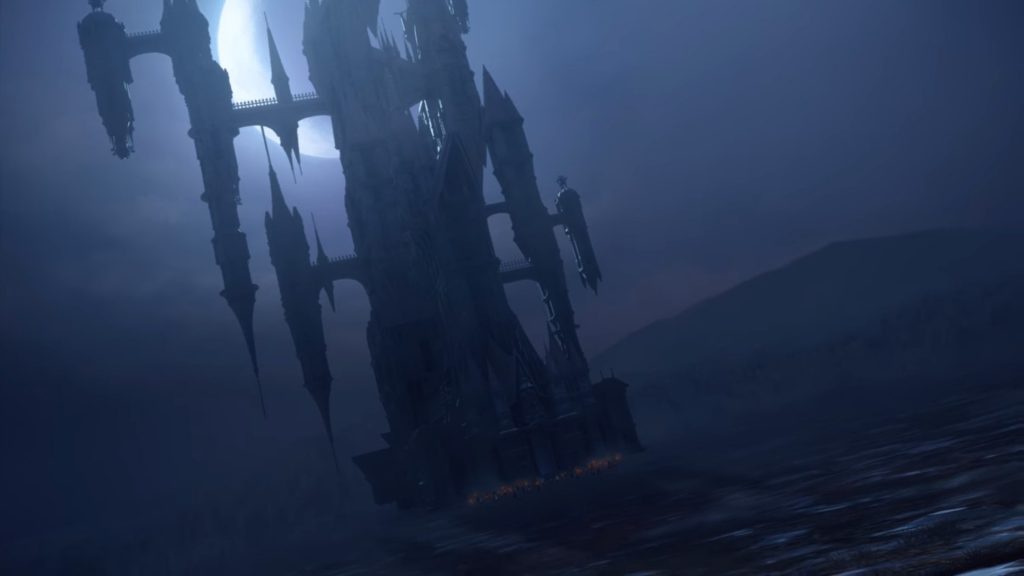 There’s many reasons this review of the final season of Netflix’s Castlevania almost didn’t happen. For one, you may have noticed that HPP didn’t cover the previous seasons. As such, I was honestly worried people wouldn’t tune in for just one season’s coverage. But since I’m such a giant Castlevania fanboy, I figured I might as well. Even though I personally had several problems with season 3, I was willing to give season 4 a chance. I’m very glad I did. Where the previous season was frankly disappointing, I ended season 4 with a giddy smile on my face. While I can’t promise to avoid all spoilers, I will do my damndest to skirt around the big ones. The reason being, the last season of Castlevania has a lot of fanservice. But I mean that in the best possible way.

Back from the Brink 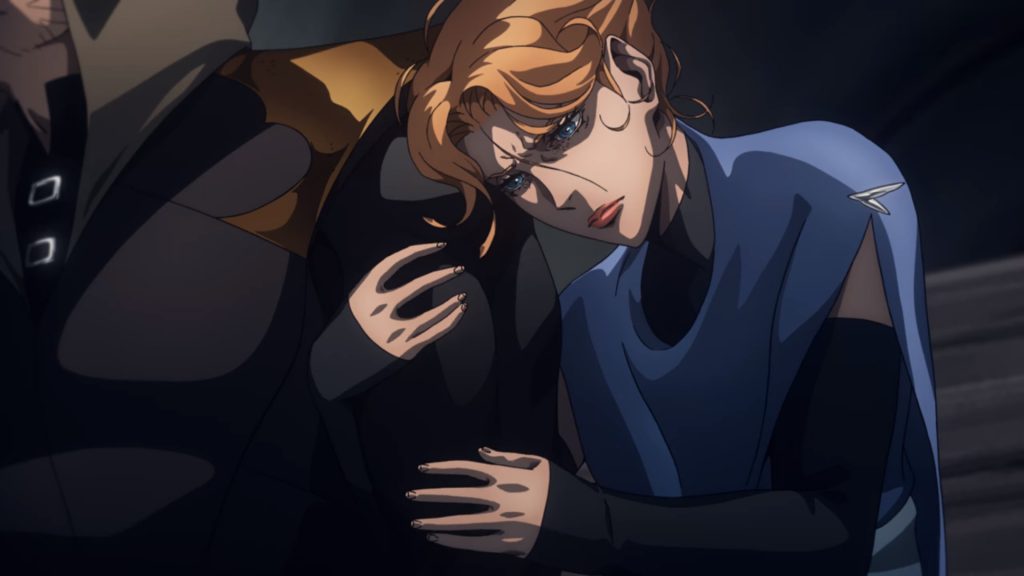 Season 4 of Castlevania starts a few weeks after the events of season 3, which ended on a pretty dark note. Alucard was seduced and then immediately betrayed by Sumi and Taka, with dire results. After he impaled them both, I worried he was taking up the family business. Meanwhile, Trevor and Sypha had a heartbreaking revelation in Lindenfield. Even though they technically won the day, it still felt like they lost. Hector found romance with Lenore, only for her to magically enslave him. Isaac and his minions took a magical tower to obtain a summoning mirror. And Saint Germain, the mischievous magical conman, was swallowed whole by the Infinite Corridor. I felt season 3 was rudderless and depressing, despite some cool fights and great repartee. Luckily, the last season manages to move on from those events while still honoring what had come before.

One clever device used to good effect is flashbacks. We see Trevor and Sypha fighting off hordes of monsters and slowly investigating a new plot to resurrect Lord Dracula from Hell. Over a period of weeks, it becomes clear there’s a coalition of different forces working to that aim, both human and vampire alike. We also get some new characters introduced this season. One is a soldier named Zamfir. She represents the underground court of Targoviste, which somehow survived the fury of Dracula’s wrath. Two other important foils are a pair of vampires named Varney and Ratko. They appear to be bumbling yet dangerous fools and are clearly invested in bringing Dracula back. Lastly, we meet Greta, a strong-willed woman trying to save the town of Danesti from invading Night Creatures.

Hunters, Monsters, and Everything In-Between 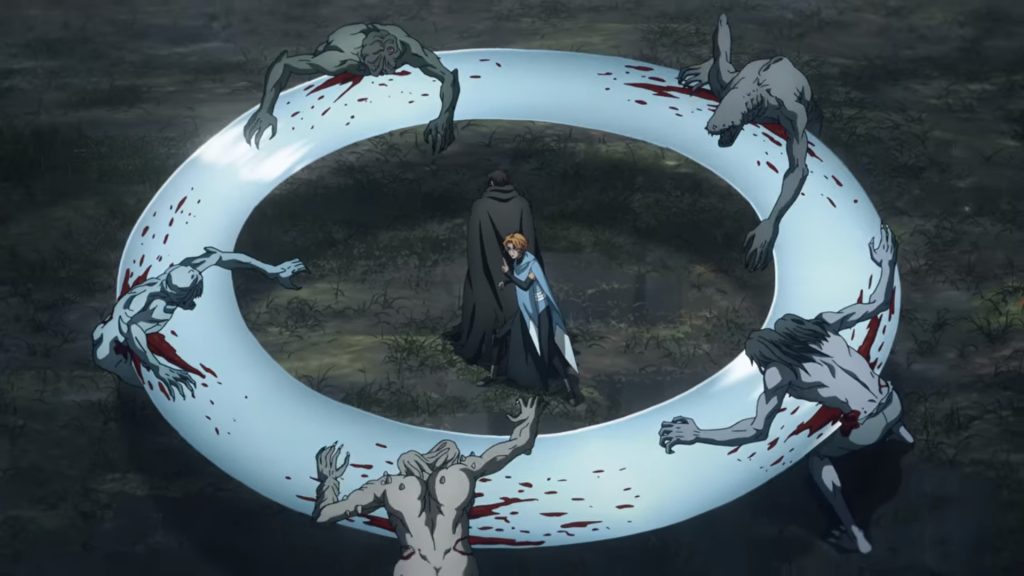 Fret not, since all the characters from last season are back amidst this world on the brink of total war. We get to see Carmilla and her sisters work to expand their empire forcibly, aiming to turn nearby humans into foodstock. Despite the horror of what Lenore did, it’s clear Hector still has feelings for her. Striga and Morana perch on the frontlines and trade philosophy on the morality of their course. And though he disappeared last season, Saint Germain returns and brings all sorts of mayhem in his wake. To my complete delight, Alucard is quickly drawn from his dark turn, thanks to the people of Danesti. In their desperate need for assistance, they send a messenger his way. In helping them, he recovers his fragile humanity and shows why he’s one of my favorite characters.

We also get to see Trevor and Sypha do what they do best – be an amazing couple and kill monsters. They also spend this season of Castlevania recovering from the last, rekindling their love in the process. Not only does Sypha use a full gamut of elemental powers, including electricity, but Trevor finds some sharp new toys to slay monsters with. Many of the best fights involve them, including battles against fan-favorite monsters, such as skeletons, Fleamen, and even the hideous Gergoth. Not to be outdone, Alucard puts his magic sword and massive shield to devastating use. He even manages to transform into a bat, wolf, and mist in a couple of epic sequences. And if you thought the last season was too slow-paced, worry not. Events progress much faster this season of Castlevania, and all the battles have high stakes. 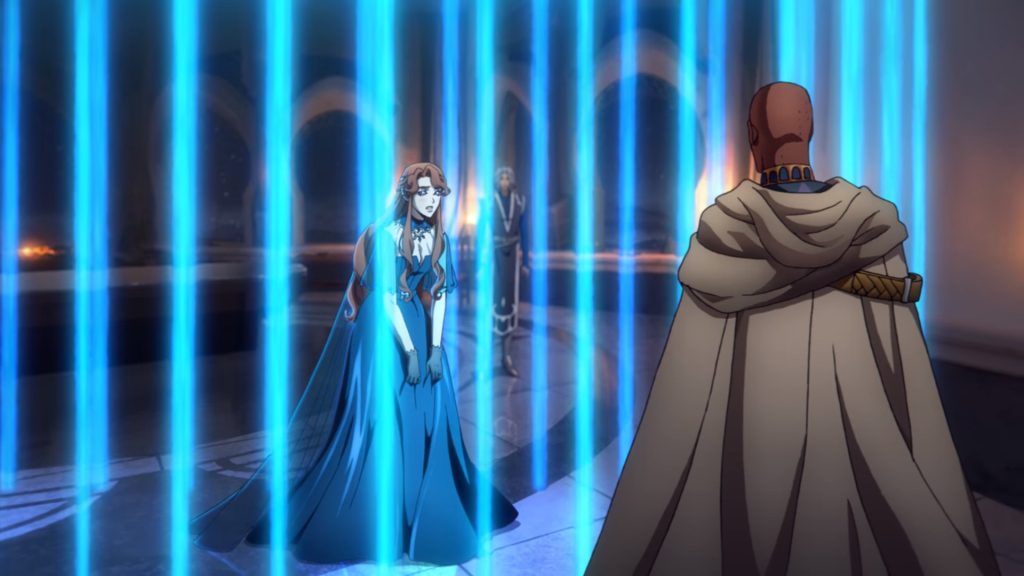 Without getting into any huge spoilers, I can say the dark events of the last season are redeemed. Each main character has an emotional arc that gets resolved by the end of the story. For Alucard, that’s recovering his humanity. For Hector, it’s finding his freedom once more. Isaac realizes he’s not motivated solely by revenge. Trevor and Sypha realize life is worth living, so long as they have each other. But that doesn’t mean the other characters get no development. Carmilla descends farther and farther into her madness and fury, and her sisters all come to question what they truly want. And Saint Germain learns that power isn’t everything. Pretty much everyone gets some time in the spotlight, aside from some really minor characters that only serve as window dressing, such as the vampire Dragan.

Resurrected and Better than Ever 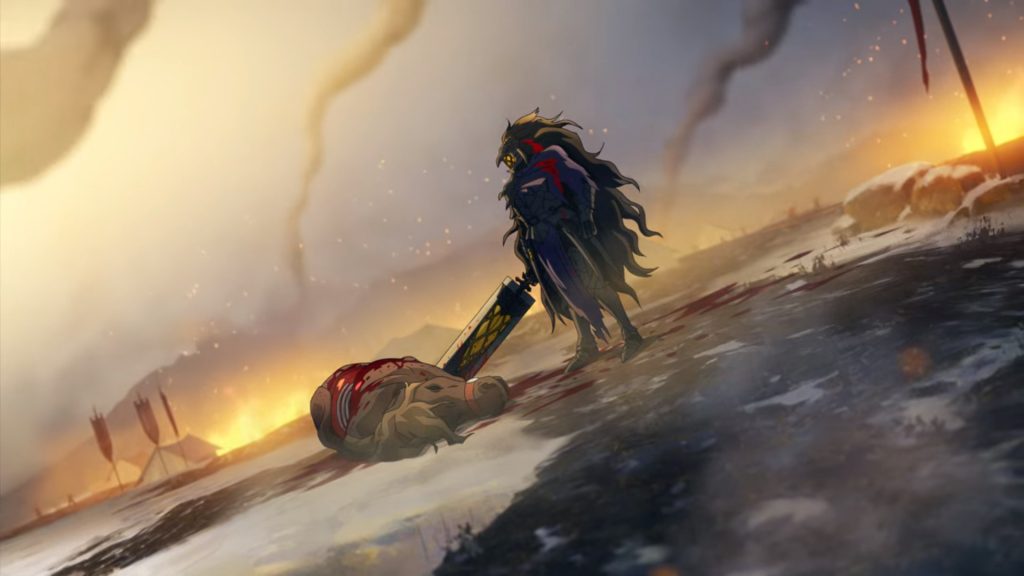 As to whether or not the villains are successful in resurrecting Dracula, I won’t say. What I can say is that the last few episodes of Castlevania made me incredibly happy, both as a fan of the show and the videogame series. And though I want to avoid big spoilers, I do have to touch on some of my favorite moments from this season. One involves Striga putting on daylight armor and routing invading humans singlehanded. Another is a quiet moment between Isaac and his nameless insectoid Night Creature. There’s one fierce battle where Carmilla fends off an army and goes into a terrifying, bloody frenzy. And the last big battle in the series, and the revelation before that, truly made Netflix’s Castlevania feel as though it had come full circle.

Ultimately, this final season of Castlevania is about redemption. Not only did they illustrate they could recover from the previous season, but they did so with flair. As a fan of not only the series, but the writing of Warren Ellis, I feel this is one of the best animated shows out there. Cause even if you know nothing about the lore of Castlevania, it’s still a rousing and exciting show full of great characters. And while I’m sad we likely won’t ever get another game, at least fans are able to feel pride about Netflix doing justice to this iconic series.