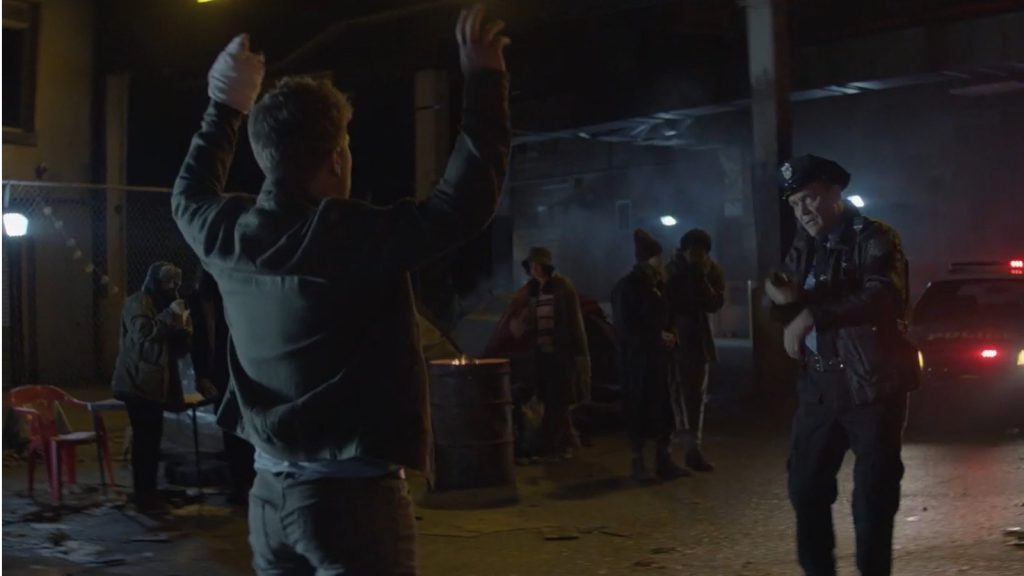 I have mixed feelings for the latest Batwoman. As you might have figured out from the title, it’s an episode very focused on social justice. While I’m fine with that, I also prefer when such discussions feel genuine. And while there’s some very relevant and heavy topics covered, it feels like it kinda came out of nowhere. Mostly cause GCPD has been such a non entity for many weeks, and suddenly they toss them in to be the racist asshole cops. Additionally, after the amazing pace last week, this one was a sort of hurry up and wait episode. But that doesn’t mean it was a bad episode. Just a bit different. Let’s begin with how it started.

The episode picks up with Alice and Circe. Alice is trying hard to convince Circe that she’s really Kate, but can’t break through Enigma’s mental walls. Things are exacerbated when Roman saunters in, and adores seeing his dead daughter’s face once more. He tells Alice she’s free, and Alice tries hard to stay. But then False Face goons force the issue, and Alice has to go.

Meanwhile Batwoman stops a Snakebite deal. Before she arrives, the buyer notices the drug looks different. Instead of the typical red / blue, it’s a light blue color. Though Batwoman takes out the dealer, the buyer escapes. She follows after him, and finds a ton of empty doses in a trash outside a derelict church. Inside are a swarm of addicts. Though that’s not unusual, what follows next is. One addict is eating another. No, you’re not suddenly watching The Walking Dead. But there are actual zombies, of a sort, in this episode of Batwoman.

Then we hear Vesper’s dulcet tones talking about zombified zealots out there. At The Hold Up, Ryan is happily making drinks and trying to ignore what she saw. It probably helps Amani, her newest love interest, is there fundraising business for the Sheldon Park Community Center. Luke crashes her high by mentioning there’s another zombie incident, but Ryan says let the GCPD handle it. Irony notwithstanding, they quickly show up. Unfortunately, they’re not there for zombies. Someone supposedly filed a noise complaint, and Ryan can either turn off the music or pay a fine and get a black mark on the liquor license. Not content to deal with police bullying, Ryan gets in their face, just as Luke is trying to calm things down. Sadly, both get cuffed and taken into the police station. Sophie shows up later to find them, and gets into a argument with the cop. Despite her being a Crow, and holding her own, she soon finds herself in a cell with Luke and Ryan.

Meanwhile the guy that bought the blue Snakebite earlier pulls up to take it. The cops don’t have problems with the random white guy, and he soon takes the dose. He’s rapidly moaning in discomfort and gets crazy ravenous. Worst of all, his eyeballs change to creepy slits with red pupils. It’s clear where the sudden zombie infestation is coming from, thanks to Black Mask not having the proper cooks for his drug. Improvisation has made a monstrous mess. The man finds out he has enhanced strength, and a sudden hunger for human flesh. GCPD tries to stop him and gets swarmed by newly made Snakebite zombies.

Now, one of the things I didn’t love in this Batwoman was how much time was spent trading philosophy in a jail cell. Again, it’s important stuff, but it also doesn’t really help with an episode partially focused on a zombie outbreak. It also doesn’t really tell us much about Ryan, Luke or Sophie, other than their generic stances. Ryan basically thinks they have to fight injustice; Luke feels it should be avoided and maneuvered around; and Sophie feels representation is the best bet to change the broken system. They all have their points, but what it boils down to is that police are bad. And honestly, I think the whole issue of police brutality is a lot more complex.

Lest you think Alice was done, you thought wrong. She now has Enigma bound and hanging like a macabre mobile from her own office. She’s still alive, but very much in danger. Alice demands she break the spell keeping Kate buried in her own mind. Enigma says to do that, she’ll need something of Kate’s to rattle a memory loose. Alice returns to the subway lair and finds something, only for Ocean to intercept her. He’s ready for love, but she pushes him away. He tells her to confide in him, that she can trust him. So she tells everything that’s happening with Kate, and they hug.

The News Is Here 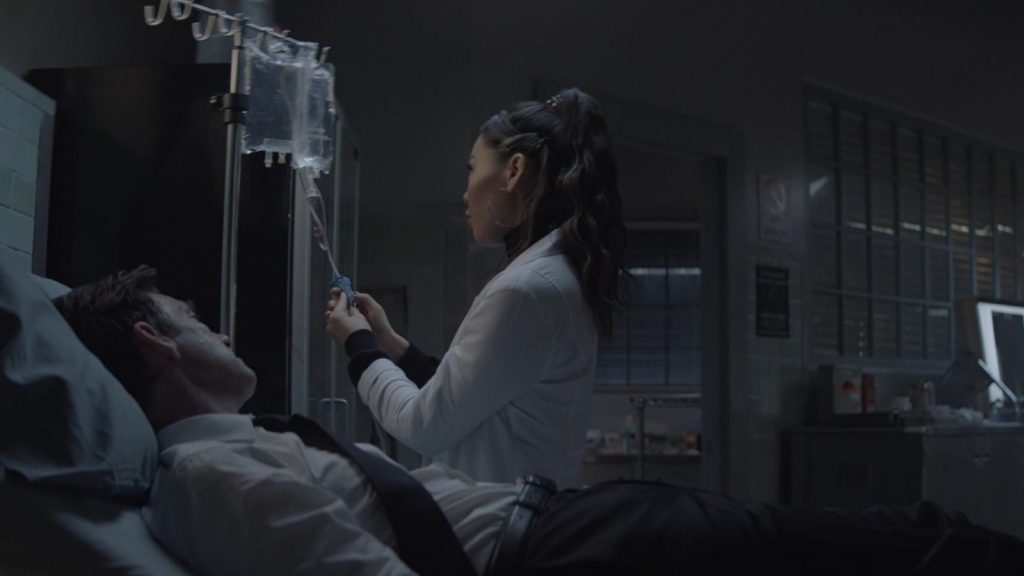 Poor Mary is helping her father recover from overdosing. She asks how it all happened, and he tells her where it started. She comments it’s gone on a lot longer, based on the numerous track marks. Then the OG zombie victim pops in, asks for help and cuffs himself to a bed. When Mary checks his readings, it’s clear this isn’t normal Snakebite. He mentions the blue color, and then starts talking about how he used Snakebite to talk with his dead wife. Mary has a revelation, and realizes this is why Jacob was so addicted to the drug. He wanted to see Kate and Beth again, and to save them.

Right as Luke, Ryan and Sophie have a moment of understanding in their mutual plight against police injustice, a random white guy is thrown into their cell. He tries to offer solidarity, and it’s clear how insincere it is. He was caught carjacking, and he’s happy to be in a cell. He tells them all how bad the situation outside is. And though the GCPD lights the Bat Signal, all Ryan can do is listen on the radio. At least, until Amani finds a way to get them out. Despite saving the day, Ryan has work to do, and sadly has to leave Amani high and dry.

Black Folks and Horror Do Not Mix 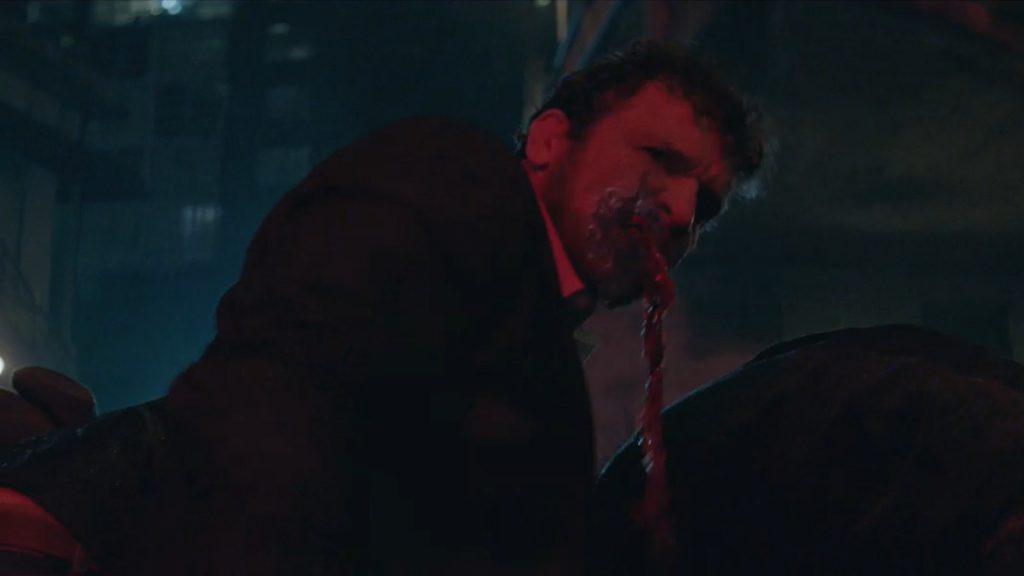 Ryan calls Mary, and Mary reads her in on what’s happening. She thinks the new Snakebite batch causes a literal hunger for memories, hence the desire to eat human brains. Mary has a sudden revelation for how to fix it. Meanwhile Sophie tries to muster the Crows, and Tavaroff interferes. He says the church that serves as zombie ground zero is outside Crow territory. He then mocks her for being jailed. Sophie pulls rank, and tells them to go and do their job, while not killing the zombies. After all, they have a way to save them now thanks to Mary. Granted, the cure is individual dose, but it’s something.

Alice and Ocean free Enigma, and show her Kate’s motorcycle keys. Those represent freedom, and paired with a trigger word, might be able to return Kate’s mind. Alice tears up, and it shows she’s come a long way as a person. Then Ocean shockingly snaps Enigma’s neck. Alice is aghast, but he says Kate is toxic, and that Alice is better off without her. He says he loves Alice, and wanted what’s best for her. After all, Kate chose her city over her own twin sister.

The big fight scene involves Batwoman back at the church from earlier. She alternates between fending off zombies and injecting them, but she quickly gets overwhelmed. Right as she’s about to become a snack, Batwoman uses her grapple. This time it doesn’t save the day, since one zombie has a hold of her leg. She gets free, but flies off in the opposite direction. Turns out to be a lucky break, since gunfire erupts in the church, and Batwoman is forced to take cover under a pew. The Crows are ignoring Sophie’s orders, and using very lethal force. She yells at them over coms, but to no avail.

It’s not over yet, though. While Jacob and Mary are reconnecting by working together in her clinic, it doesn’t last. Though he now sees the value of her clinic, she’s hurt at his obsession with Kate and Beth. Says he’ll lose his one living daughter if he doesn’t move past that (I suppose it makes sense she’s not counting Alice). Before their argument can blow up more, the zombie that chained himself up bites through his restraints and escapes. He wanders about trying to find food, and a cop pulls up and tries to arrest him. Instead mister zombie takes a big bite out of his neck before Batwoman arrives and injects him. The cop thanks god she’s there, and she retorts she almost didn’t make it.

Help Me Not to Kill You Right Now 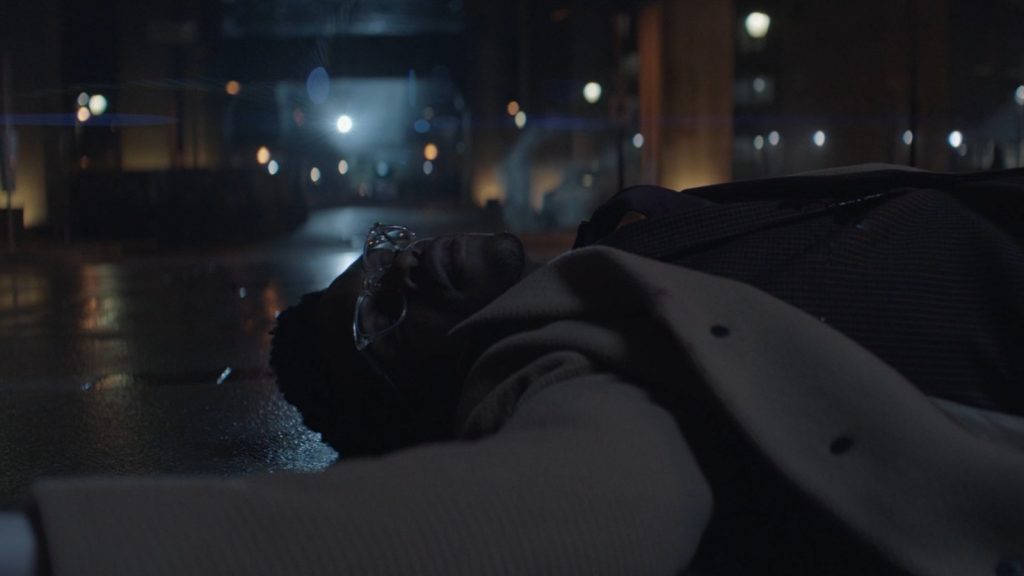 Back at The Hold Up, a news report talks about the timely intervention of the Crows keeping the city safe. Sophie has had it, and tells Luke and Ryan she’s leaving the Crows. They tell her she’s more needed with the good guys anyhow. Then Ryan spends time talking with Amani, and apologizes for not being around. She says she can’t reveal all her secrets, and it looks like that’s another relationship in the crapper.

The most shocking part of the episode is the end. Luke finds the random white carjacker doing his thing, and tries to talk him down. He takes a picture of him first, just to be safe. He’s pushed back, and suddenly Tavaroff is there. The criminal claims Luke was trying to steal his car. And when Luke tries to grab his phone for proof, Tavaroff shoots him three times. A poignant ending, for sure. I just hope Luke survives, and that next week’s Batwoman is a bit more tightly structured.