In the End, You’ll Solve It 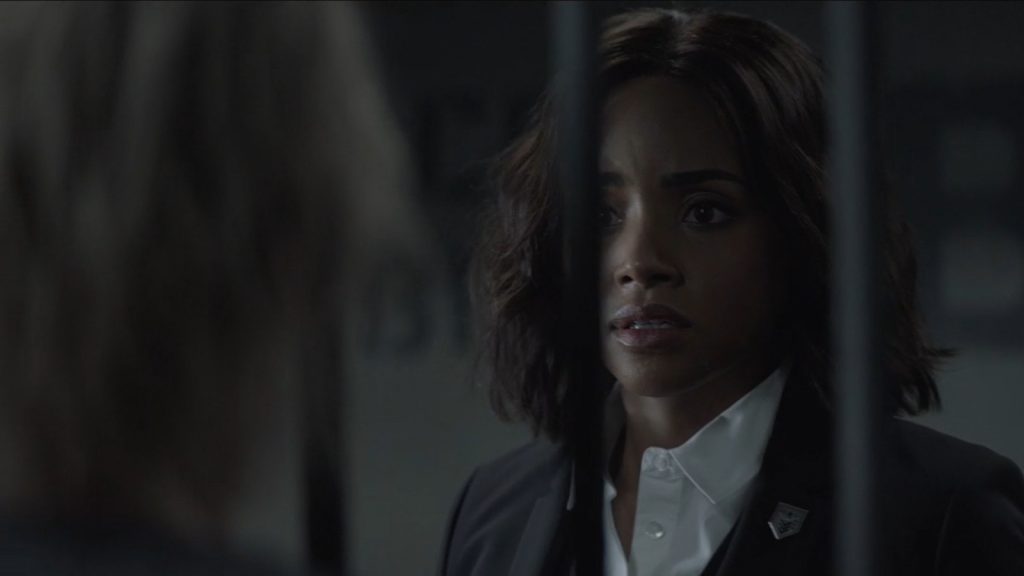 I finally think it’s safe to say this – Batwoman is past its sophomore slump. To be fair, it can’t have been easy transitioning the show to an entirely new main character. Sure, there were growing pains as Batwoman worked to draw all the disparate plot threads together, while still helping showcase what Ryan brings to the Bat mantle. But it feels like the show is really growing into its own now, and the latest few episodes are great evidence of that trend. The latest episode, I’ll Give You a Clue, is a great framework. Not only does it fit the villain of the week, the Cluemaster, but it also has several characters come to big revelations in a natural progression.

The episode starts with a flashback. 5 years ago, rookie Sophie earned her current position by putting the Cluemaster behind bars. His name is Arthur Brown, and he was a game show host before he went crazy and threatened to blow up an audience unless the Crows could solve his clue. He keeps insisting she reveal how she deciphered his clue, but she refuses. The enraged criminal gets furious, since there’s no way his brilliance could be matched by a Crow, but is unable to get a response from a young Sophie. Then we cut to present day, as a guard checks on the criminal and finds he’s not there. There’s a big lump covered by blankets. When the guard gets closer, the sneaky Cluemaster pops up from behind and shivs him in the neck, escaping his captivity.

You Wanna Know Why You Guys Suck? 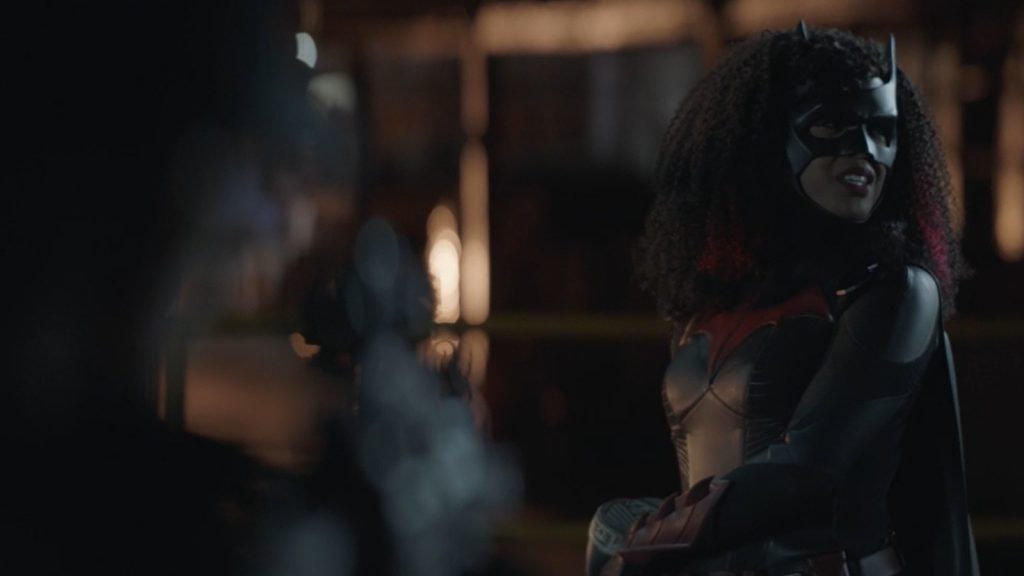 Then we see Batwoman going after False Face, trying to plant a tracker on one of them. Right as she’s about to, Tavaroff draws his gun on her, and demands she stand down. Instead, Ryan goes on a tirade about how much they suck, confusing them and providing enough time to grab her grapple and escape. And speaking of Crows, Jacob is falling deeper and deeper into his addiction. He’s alone in a park sitting at a wooden table, and all he has with him is a dose of Snakebite. He doses himself, and is willfully imagining that he’s with both his daughters when they were young and happy.

Alice also has some pretty bad luck, and is at the mercy of Black Mask and Circe after last week. Though she’s trying to be bold and brassy, Black Mask has her hooked up to a torture device, slowly removing her fingernails. Later she somehow gets loose, and smashes a bottle on the floor. When Circe comes to investigate, Alice bashes her along the head with another bottle. Then Alice calls her father, who is in the midst of a hallucination. She begs for him to trace her call, but the drugged and confused father tragically tells her that she has the wrong number, moments before Circe knocks her out and locks her back up.

Ryan arrives at home to find Sophie and Mary drinking tequila and having girl talk. Of course Ryan’s upset about this, but is strong armed into one drink. Sophie is celebrating her 5th anniversary, and she has tequila. The women start playing “never have I ever”, taking shots. Drunk Sophie asks a leading question to Ryan, about why it wouldn’t make any sense for the new Batwoman to save her. Though it goes over Ryan’s head, it’s clear Mary picks up on the subtext, and is alarmed. But before that can lead anywhere, they find a poisonous worm in the tequila bottle. Though it wasn’t meant for them, there’s a card from Cluemaster, and it implies someone else will die unless they solve it. Ryan figures out part of the clue, and takes a lit candle to the bottle to make “hot shots”. This reveals a hidden logo featuring two guns.

Now forced to work together, Ryan, Mary and Sophie jump a fence. Sophie admits she didn’t solve the first Cluemaster incident herself, but actually got a lucky call from a tip line. The person who solved it begged to be kept anonymous, and so Sophie was promoted for keeping her word and maintaining the lie. As they search the compound, they find the poison cure, which triggers flood lights to train on the victim, trapped in a glass box. It’s none other than Stephanie Brown, Cluemaster’s own daughter. What follows is another series of clues involving color coded targets, which let’s Sophie show off her marksman skills. They free the young woman, only to find her skin covered in strange markings, yet another clue to be solved.

This Show Always Creeped Me Out 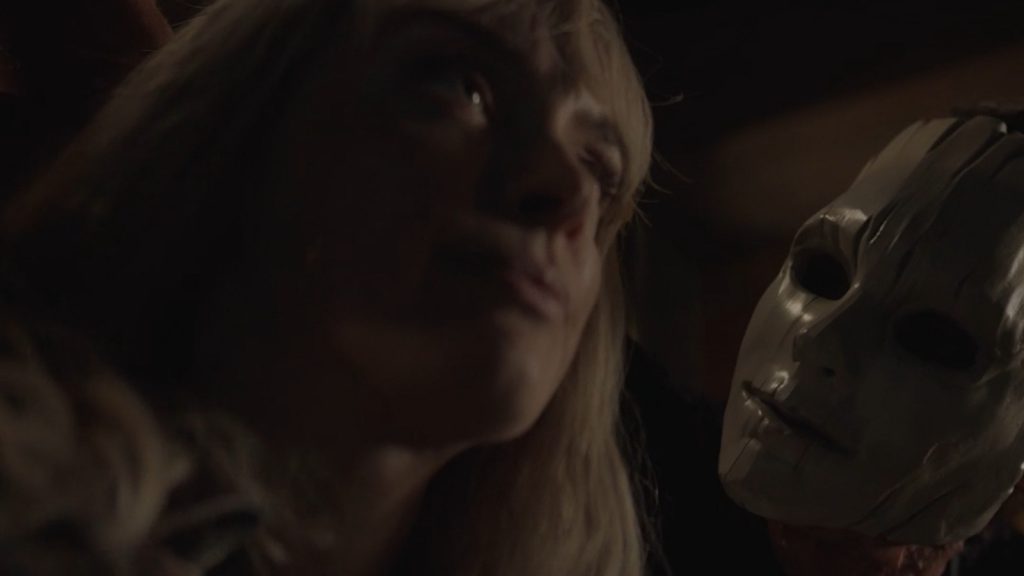 Stephanie reveals she was the one that called the tip line years ago, but her father doesn’t know it was her. Thus all his rage is directed at Sophie, and proving he’s the smarter person. Over the years Steph grew very capable at solving her father’s riddles, but the current one is a step above. They enlist Luke to help out, and there’s instant nerdy chemistry between him and her. Luke finds a clue hidden in the morass of gibberish, which leads them to the set of Cluemaster’s old game show, Quiz Bowl. Once Ryan, Mary and Sophie arrive, they activate an alarm, and the TV starts playing. Worse, Mary and Ryan are caught standing on an explosive pressure plate.

By answering clues, they get more time to deal with the explosive. But if they fail once, they instantly get blown up. A TV recording starts asking questions, and of course the answer to the first question is The Riddler. Meanwhile Luke and Stephanie try to figure out the gibberish. She manages to discover that the Quiz Bowl was a decoy, right before knocking Luke out and running off. Meanwhile the girls solve the last clue, and have 45 minutes to get off the plate. Sophie says they should call Batwoman, and instead they call Luke, who is still unconscious.

Back in Alice land, Circe is kindly threatening to gouge out Alice’s eyes unless she tells Black Mask who Batwoman is. Instead, Alice recalls an incident at Arkham involving the real Circe. She is starting to figure out something is amiss, since the original Circe was trampled to death in a breakout. Regardless, she tells “Circe” that she’ll talk with Black Mask. When he arrives, Alice has figured out his real identity from things she heard from his pretender daughter. Before he can silence her, she offers to make a new face for the woman, not realizing it’s her own sister.

This Will Come as a Shock to You, But I Can be Trusted 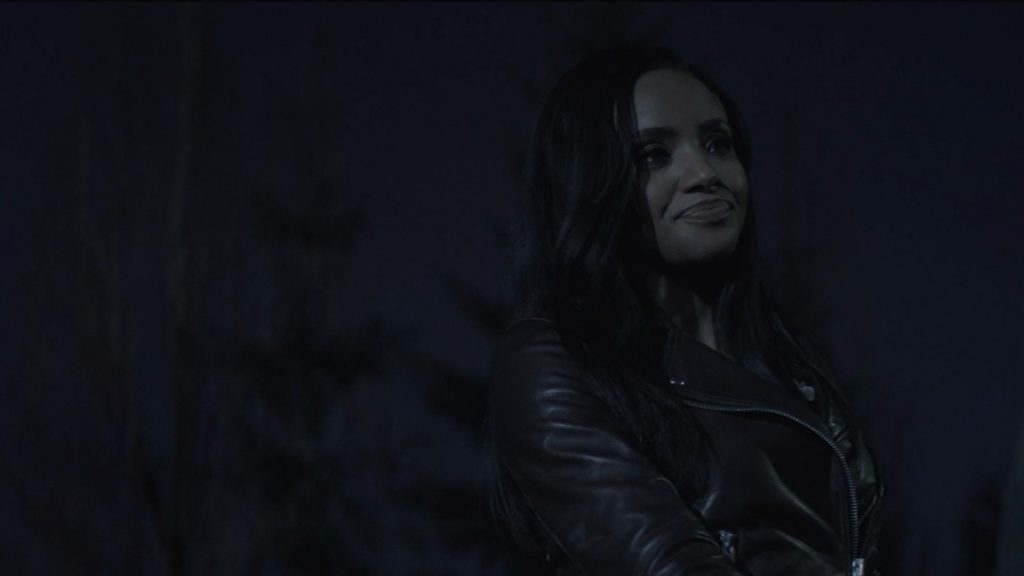 Back at the Quiz Bowl, there’s a lot of arguing on how to proceed, before Sophie admits she knows Ryan is Batwoman. Ryan tries to play it cool, but Mary is flabbergasted. Ryan finally relents and tells Sophie how to get to the Bat Cave and what to get to solve their predicament. That’s then followed by Mary and Ryan fighting over telling Sophie the truth. Mary thinks Ryan is so dead set against the Crows that she isn’t thinking straight.

Cluemaster and Stehanie arrive at her childhood home, and talk. He’s sporting a goofy suit that shows all criminals in Gotham love to wear flamboyant costumes. Stephanie reveals she was the one that turned him in, and he throws a gas bomb. When she wakes up, she’s in a car with her dad, with toxic gas pouring in. He isn’t handling the fact his daughter outsmarted him well, and is gonna kill them both. Luckily, Luke arrives and saves the day by breaking a window, dragging Stephanie out bodily. Afterwards, the EMTs cart Cluemaster away, and Stephanie kisses Luke for his kindness. She would offer him her number, but figures he can figure it out. I’m happy about this, since Luke as a character has gotten the least amount of development, so I hope this is a means to that end.

As Mary and Ryan wait for Sophie to save the day, they talk more. Ryan says Mary should talk with her instead of Sophie, and Mary reveals that Sophie thinks Jacob is on Snakebite, and that she’s starting to believe it. After all, her father has suffered so much loss. Sophie gets there with seconds to spare, and hands Ryan her trusty grappling hook. What follows is a dramatic escape, with an explosion at their backs.

The episode ends with tragedy. Mary is calling her dad back at the clinic, right before he’s brought in on a gurney. He was found in the park by homeless people, and he’s now overdosing on Snakebite. Ryan and Sophie are mending fences, but Ryan still doesn’t trust that Sophie respects her. Then the Crow admits she erased Ryan’s one case file to prevent the DNA match last week. And let’s not forget Alice. As she puts a brand new face on Circe, she notices her eyes, and realizes it’s Kate. Overall a very solid episode, and hopefully one that sets the tone for weeks to come in Batwoman.