Back In the Pilot’s Seat 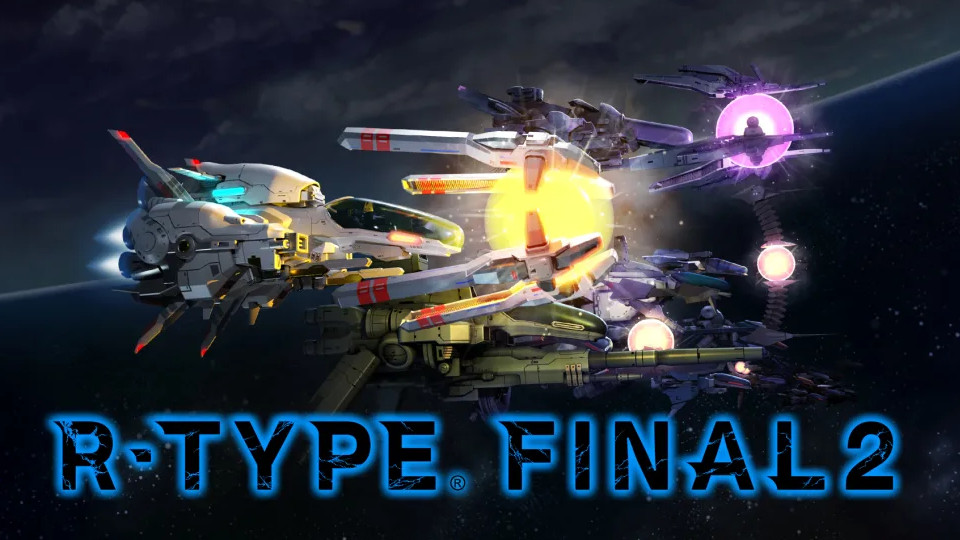 Finality is a funny concept, especially in video games. We hate the idea of something being over. Hell, look at how many games take place in the so-called Final Fantasy series! But I never thought R-Type would toy with that concept. After all, the original R-Type Final came out nearly two decades ago. And when Irem downsized and restructured as Granzella, it stood to reason that was the last dance for this respected shmup series. But thanks to the magic of crowdfunding, R-Type got a new lease on life with R-Type Final 2. Finding a willing publisher in the folks at NIS America, Granzella got the funding to weave their magic one more time. The question is, was this unexpected sequel worth the very long wait? 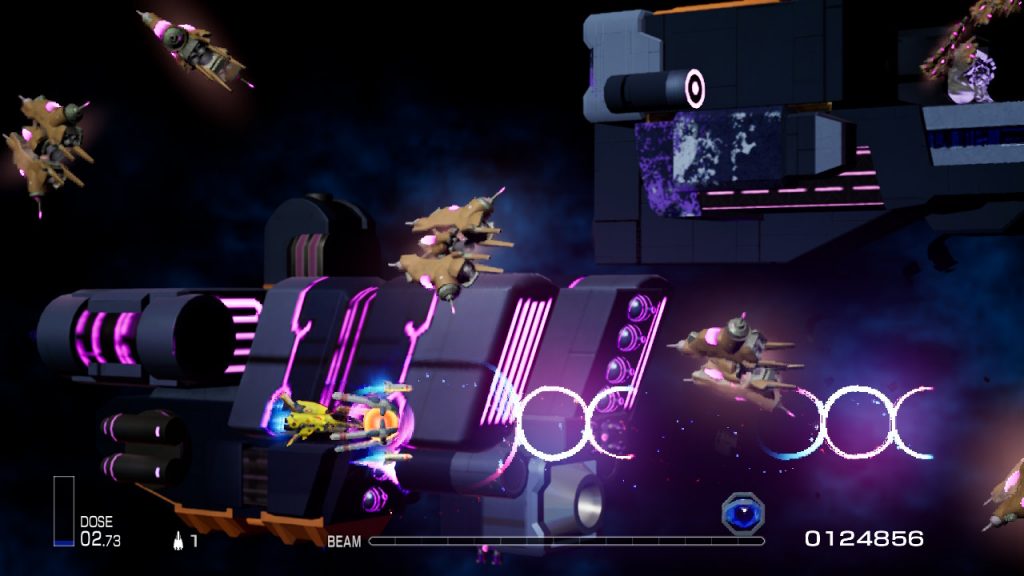 Despite the long time since I last played any R-Type game, my reflexes came back pretty quickly. Granted, I had forgotten about the Dose Break feature, but strategically manipulating the Force module was effortless. It’s such a novel idea to use an orbiting drone both offensively and defensively, and it’s really part of why I love the series so much. But, that increased maneuverability comes at a price – really challenging foes. When everything on screen can and will kill you with one touch, you have to master the basics really quickly.

The first stage of R-Type Final 2 was a good crash course, but the moment I got to the second, a horror show full of oversized plants, I was overwhelmed. Thankfully, I’m a stubborn guy. Plus, there’s a handful of different difficulties you can pick from, though none of them are what most gamers would call easy. On the positive side, if you do poorly over and over again, the game seems to take pity on you and provide infinite continues. Ego aside, that’s a nice feature, and it helped me get through the hardest sections with sheer determination. 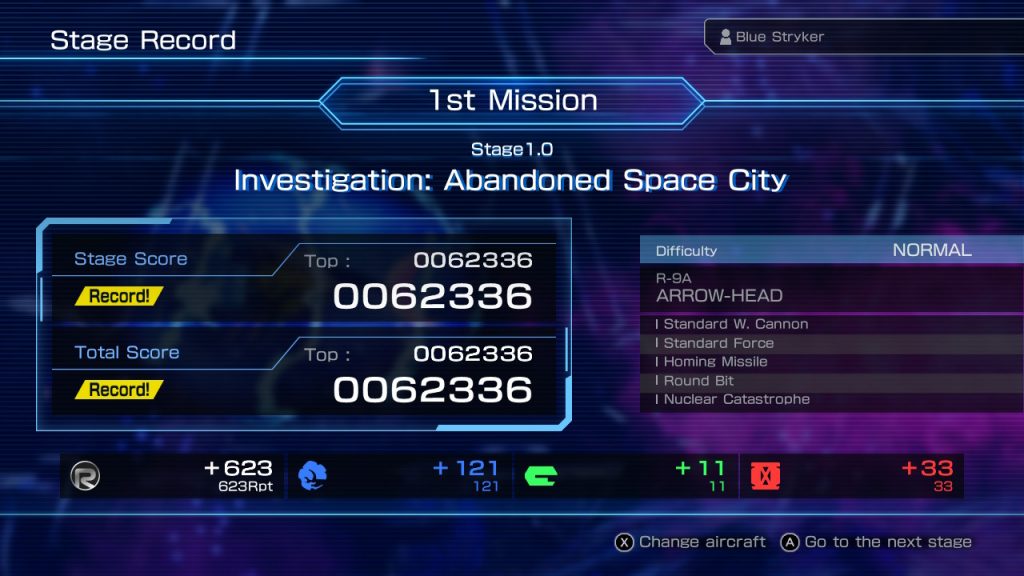 As for how R-Type Final 2 is structured, it’s both linear and surprisingly extensive. Though the first 5 stages will always play out the same, the last two will vary depending on which colored orb you pick right before facing the stage 5 boss. There are 3 different two-stage final routes, and they are incredibly distinct. One of my favorites involves moving through a vertical corridor while avoiding deflected bullets; another has you chasing after a gigantic alien snail in a graveyard full of destroyed trans-dimensional fighters; one even has you weaving in and out of tight corners while enormous insects spin a dangerous web around you. The point is, while the game starts the same, the way it ends can be very different, and it’s all up to you. 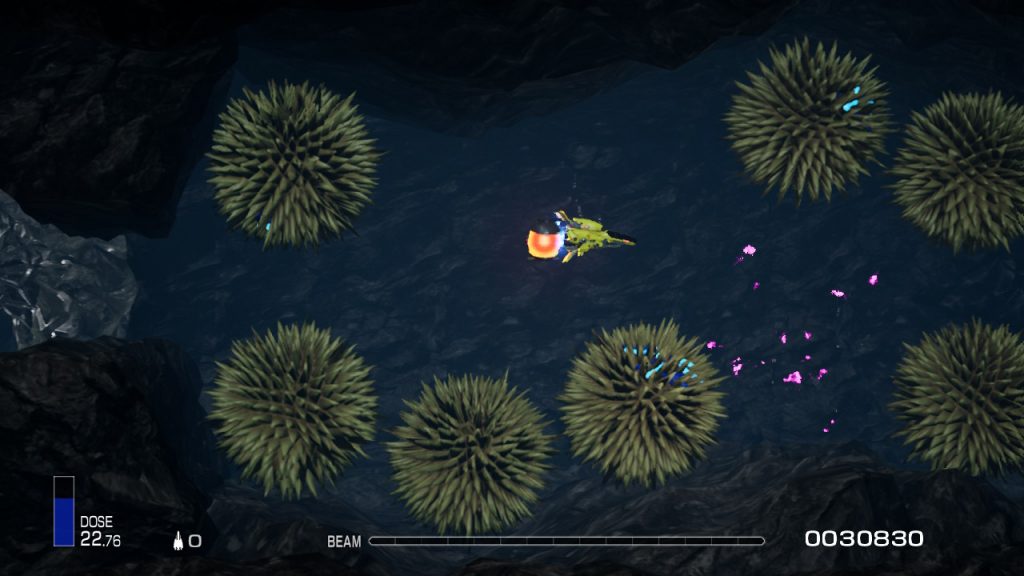 Which isn’t to say the first 5 stages aren’t worthwhile. They’re actually a lot of fun, except for the plant stage I mentioned earlier. That one irritated me plenty since it loved to cramp you in tight spaces while spawning tiny foes to hound you. Over time I learned how to navigate it, but I never got past that initial negative impression. Regardless, each stage in the game has challenging waves of foes, including many that love to come right at you. They also have harrowing boss fights, including a handful that nearly made me give up on fully beating the game. But luckily, I persisted and got all three possible endings the game offers. While most of the endings aren’t that interesting, mostly just consisting of some written text as the screen scrolls, one impressed me. I just can’t go into more detail for fear of spoiling fellow R-Type fans. But you’ll know it when you see it. 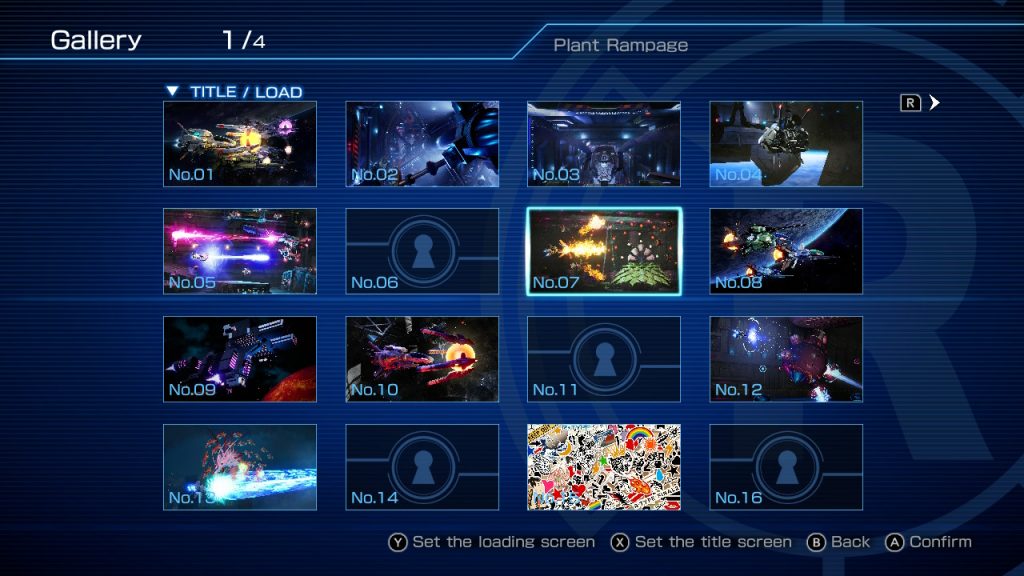 You’ll gradually unlock a ton of extras, including the Gallery and Bydo Lab entries.

One of the things I most appreciated about R-Type Final 2 was how much unlockable content is packed in the game. After you beat each stage, you’ll get rewarded with 3 resources – blue Solonium, green Etherium, and red Bydogen. These are used to unlock new ships from the R Museum. There’s 99 total, which is actually a couple less than in the original R-Type Final. Some ships can simply be unlocked with the requisite resources. Others require having unlocked another particular ship first, or even a specific stage. Then there are the odd ones that ask for a password. My understanding is that currently, there are about 54 ships that you can unlock, and others will become available via updates over time. I fervently hope that’s a free update situation and not a paid DLC one. 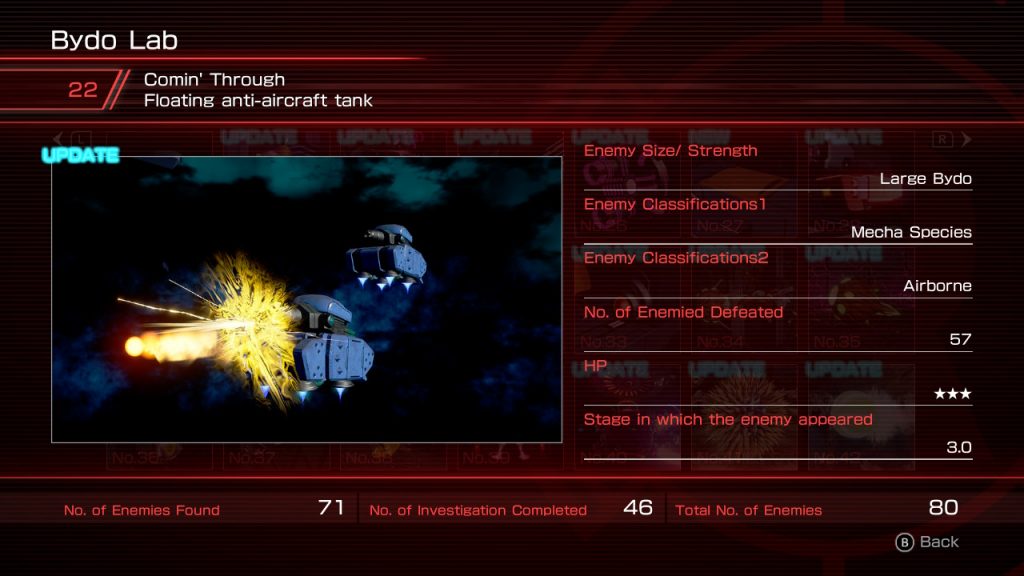 Either way, there are many ships you can choose from, each with a different array of weapons. Some may seem identical, but there are minute differences worth checking out. Some have really unusual Force modules, others have powerful Wave Cannons, and some are just weirdos. But none of them is worthless, and they let you really toy around with your playstyle. Especially since you can have 12 registered ships in your Hangar, which lets you switch between them in-between levels. Just don’t forget to register the ones you want before you start a new adventure. Some of my favorites were the fierce War-Head and the complex Andromalius, whose Force module has its own killer AI.

Blinging Out Your Ship 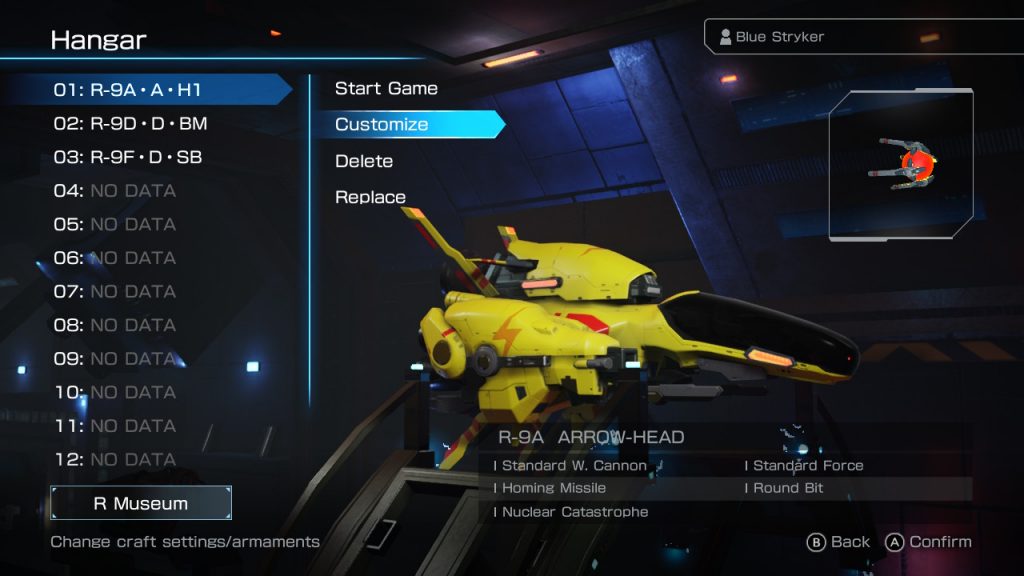 You’ll also get currency when you beat stages, but that’s not for purchasing new ships. No, that’s used to buy things like decals for your ships and suits for your pilot. I’m not sure why the latter is even there since you can only see the pilot in the intro cinematic, but the decals are cool. They are one of the many things you can use to customize your ships. You can also play around with the color and make beautiful abominations. I know I’d been playing too much New Pokémon Snap when I made my Arrowhead ship bright yellow with orange lightning bolt decals. But if you want to just play with the default designs, you’re more than welcome to totally ignore all the aesthetic options. 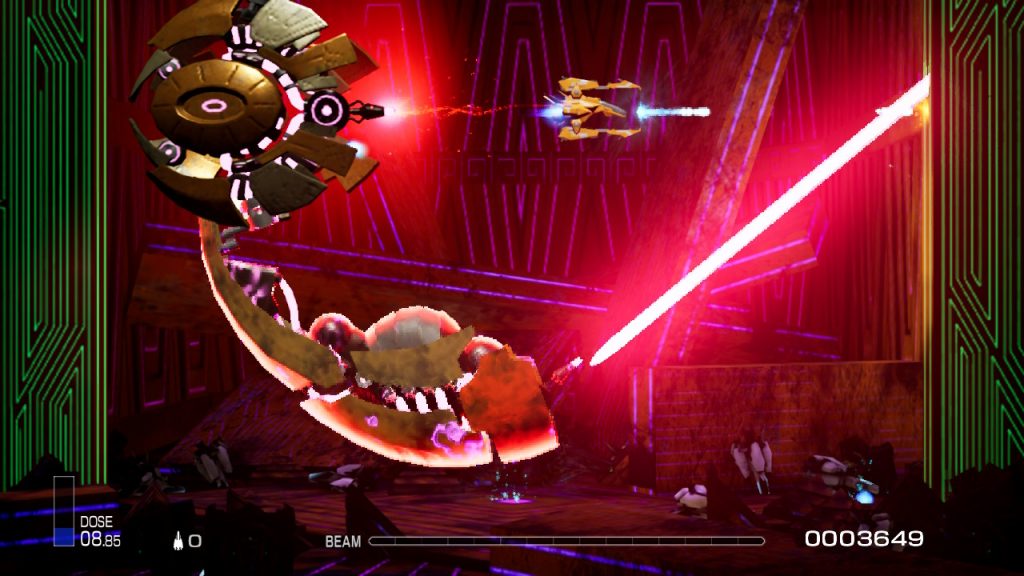 If you listen carefully, you can hear me swearing a blue streak as I fought this boss…

While I truly enjoyed my time with R-Type Final 2, I need to touch on things it either did poorly or could have done better. Every time you start a new game, the same introduction cinematic plays out. It even presents a choice you need to make before it concludes. It’s not a very long scene, lasting about a minute, but you also can’t skip it. I’ve tried repeatedly. That means every single time you play, you’ll be forced to twiddle your thumbs as it slowly plays out. And that’s not even touching on the long endgame credits you also can’t skip. 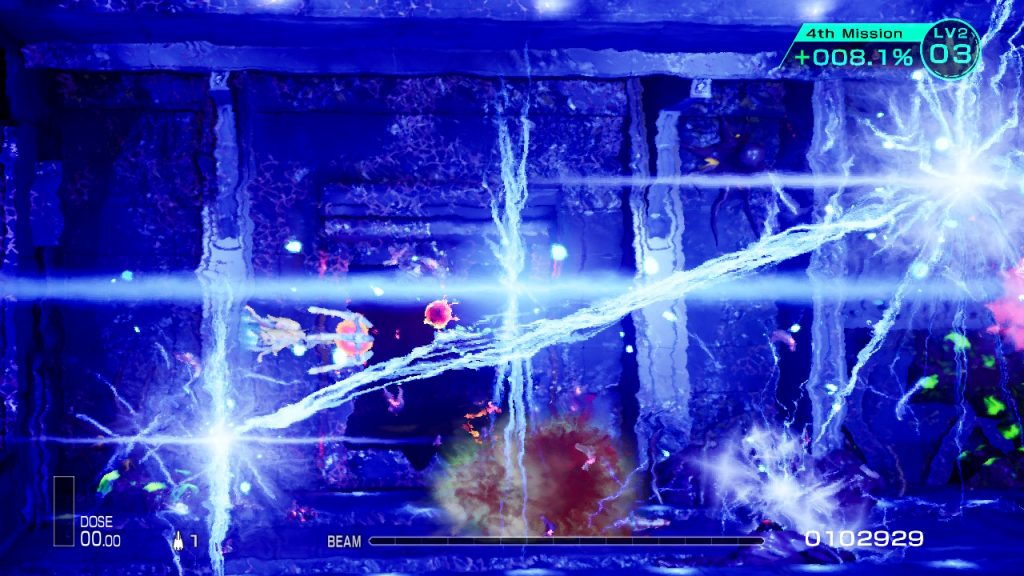 When all else fails, use Dose Break to even the playing field.

Given that I played R-Type Final 2 on the Switch, I really wish it was more geared towards portable play. I know it’s not the only version of the game, but why not lean into this console some? Sure, you can play on your couch, but the game won’t let you quit and return to a stage later. You have to do it all in one sitting, even with checkpoints. And though that shouldn’t take you more than an hour or two, it still felt like a missed opportunity to me. Also, despite how much I like the diversity of the final stages, there’s one area they fall flat – the bosses. The bosses in every other stage but the final ones are tremendous. By contrast, the final bosses are usually just oddities after suffering through their grueling stages.

While it’s true there is a Course Editor, it’s a lot less exciting than it sounds. I thought maybe it would let me shift around level chunks, enemies, and even bosses to make my own stages. Instead, it just lets you choose 7 stages to play in any order you please. That’s it. Worse, it’s not intuitive. To even play an edited course, you first have to go to Score attack, choose your order, and then select Play Original Course. That last part threw me, but it’s indeed how you do it, and it’s super unintuitive. 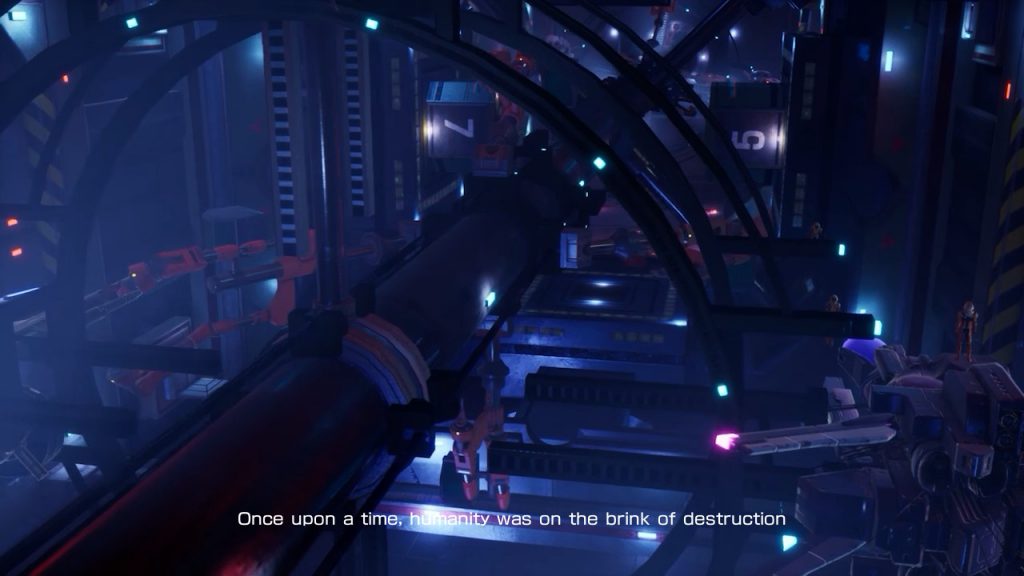 Now we come to my biggest issue with the game. I have played other titles and been forced back to the Home Screen by an error. But most games I play these days automatically save their progress. In R-Type Final 2, this error occurring means you can lose an entire run. In my case, it happened in the second to last stage, one I had been struggling with anyhow. I put my Switch into Sleep mode to decompress, and when I turned it back on, the error suddenly occurred. Meaning I lost all my progress for that run and had to start over from scratch. When you pair this with the aforementioned issues, such as not being able to skip the intro, it becomes even more egregious. 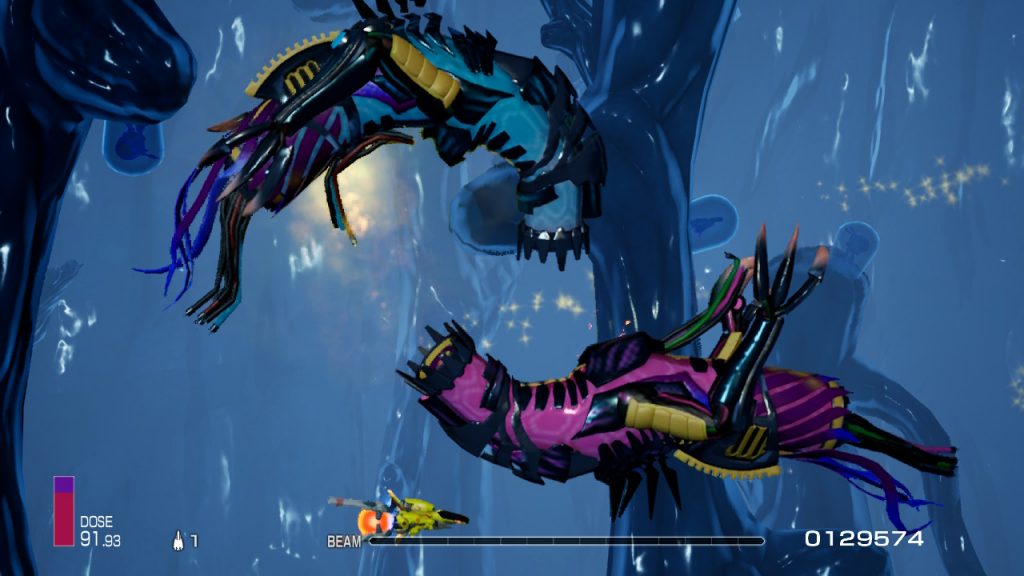 On a more positive note, R-Type Final 2 is an attractive game. It’s colorful and has a varied bestiary of monsters and ships to blast out of the sky. While it does look like a game from the PS2 era, that’s not a knock. I love classic games, so I don’t at all mind if something isn’t next-gen looking. The highlight of the game is the bosses, which are all really twisted and challenging foes. The sound design is a bit mixed, though. The effects for things like detaching your module or firing your weapons are on point. But the music isn’t that enthralling. I also wish there were more distinct audio cues for more boss attacks, which would have helped me a lot.

Blast Off and Strike the Evil Bydo Empire!

In the end, I’m not sure we needed another R-Type, but I still enjoyed R-Type Final 2. For your money, you get a ton of content and lots of challenge. While I still fervently hope they patch the issues I pointed out, such as the unskippable intro and end credits, the base game is still solid. If you’re an Irem fanboy that is looking for the next great shmup, this is probably a safe choice. 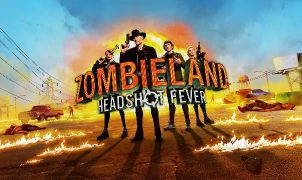