Crash landing on you 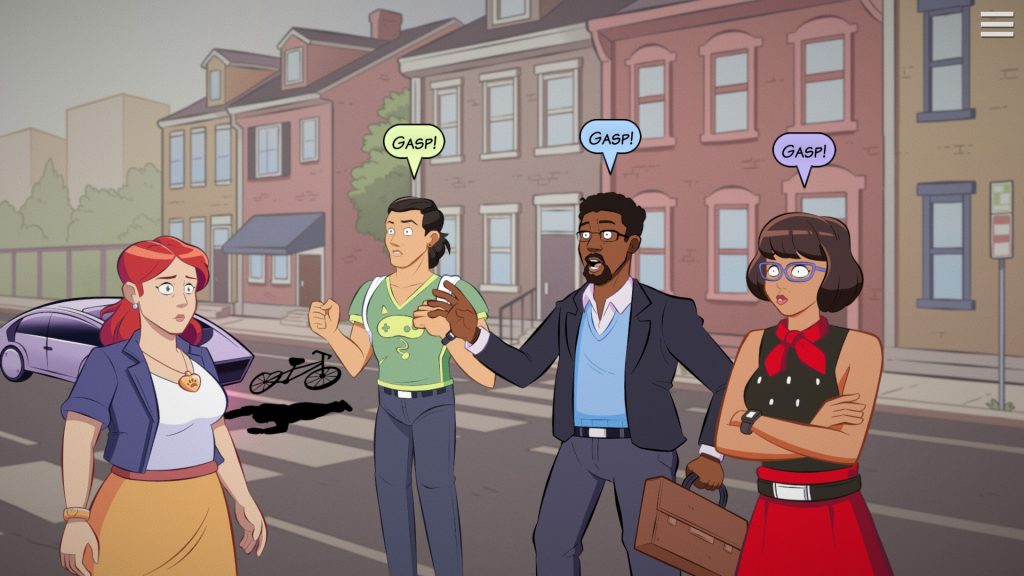 With the recent news of The Great Ace Attorney Chronicles launching this summer, I’ve been dying to sink my teeth into a good murder mystery game. Only problem is, I’m genuinely strapped for time at the moment (ah, adulthood). I wish I had the hours upon hours necessary for some of these story-heavy investigative games that I gobbled up in high school and college, blissfully unaware of how hard it would be to pull all-night gaming sessions back to back in my 30s. If only there was a good murder mystery game that I could complete in 2 – 4 hours that didn’t compromise on a scintillating story. Does such a game exist? 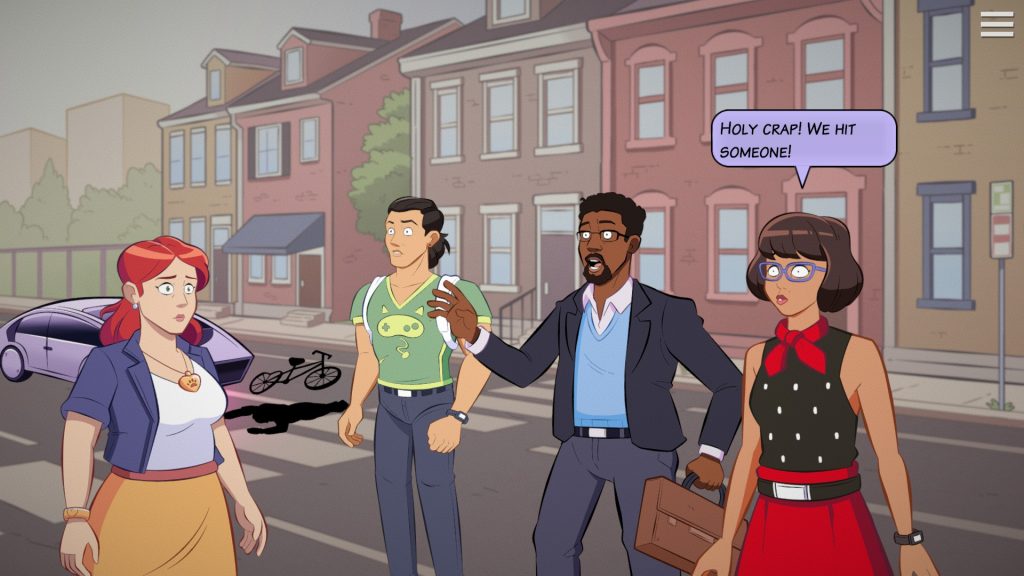 Developed and self-published by Studio Nightcap — an indie game studio founded by industry veteran David Shaver (The Last of Us Part II, Uncharted: The Lost Legacy, Titanfall 1 & 2) — CRASH: Autodrive is a whole lot of whodunnit wrapped up in a bite-sized experience. Perfect for those of us who have a ton of deadlines coming up at once that they want to *lightly* procrastinate or who just aren’t sure which game to play next, CRASH: Autodrive is a quick, quirky gem that will satisfy anyone it speaks to. And, having previously played the even shorter prologue last year, I can safely say that it delivered on all promises — a lovely thing to say about a risk-taking game with an interesting background and premise that bet against the clock.

CRASH: Autodrive has players taking on the role of Emily Knight, a young college dropout juggling three jobs — a somewhat common situation in the not-too-distant future of 2027. Today marks a potential change for Emily, however, as she’s secured a job interview that might provide her the means to return back to school. So, she hails a self-driving taxi and practices her interview questions, silently absorbed in what could be a big turning point in her life. She hardly notices the three other passengers that the autocab picks up along the way; what she does notice is when the autocab slams into something and deploys all the airbags — an accident? In this day and age? 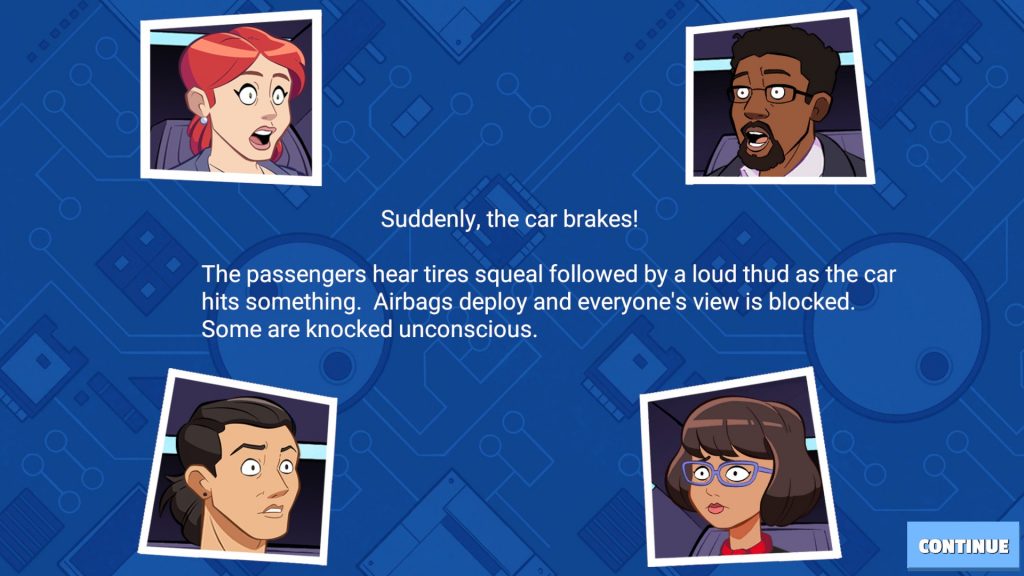 Unfortunately, the consequences of this accident were far greater than missing an important meeting — as Emily and the passengers soon discover, the autocab has collided with a man, resulting in his death. What’s odd is that Emily knows the victim: Thomas Sinclair, a former boss who unceremoniously fired her for being “unnecessarily kind” to the AI they were developing. Odder still, everyone else seems to be connected to Thomas Sinclair as well — from a former partner, a current coworker, and an old high school classmate — all passengers aboard quickly realize something is far too fishy for this to be a mere coincidence. Hell, even the AI powering the autocab that struck Sinclair was developed by him! Surprise soon turns to confusion, and confusion soon turns to the sinking feeling that one of them — the four passengers and the AI — could have potentially murdered Sinclair. To clear their names, they cancelled their plans and started sleuthing, trusting no one — after all, even the car is a suspect!

CRASH: Autodrive is easy to jump right into in more ways than one; for one thing, the controls are simple and the writing is solid, the words practically jumping right off the screen. The aesthetics are what really caught my attention, as the art direction is not only pretty unique but well done, but the music is Phoenix Wright-esque. Even though I played this game days ago, I still have the investigation music stuck in my head, much like an Ace Attorney game. You can tell the vibe was inspired by those titanic classics, and the homage was beautifully achieved here. 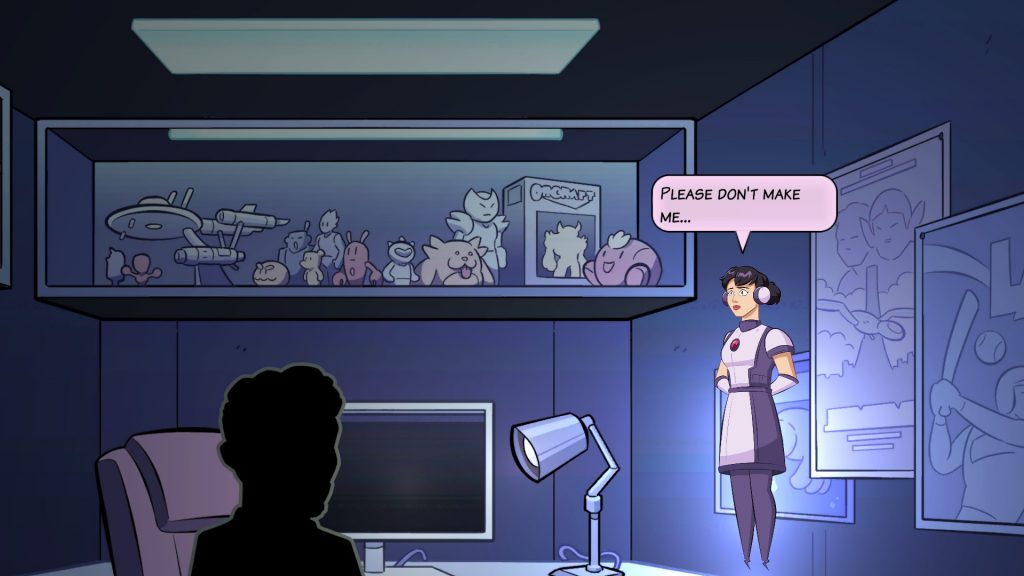 Because CRASH: Autodrive is so short (I beat it in about 2 hours), it’s easy to think that the storyline couldn’t possibly be deep, but that notion couldn’t be further from the truth. There are five defined suspects with two that I felt I could disregard halfway through the game, narrowing it down to three by the game’s end. Once it got there and the culprit was revealed, I realized that the game’s theme was centered around something that was said in passing during the investigations. Only looking backwards do I see how clever the setup was, which was really such a pleasant surprise to come across. I can’t say anything without spoiling the entire game (it is short, after all), but let’s just say this little murder mystery begins and ends with AI in a seriously smart way.

It’d be unfair to CRASH: Autodrive to knock it for being short, because it is a complete experience. It has everything a murder mystery needs intelligently condensed into a 2 – 4 hour journey. I say this less as a criticism and more as a warning to any potential players, because the last thing a game of this caliber needs is a negative review discussing its length when its brevity is in fact a selling point. I was able to squeeze this story in a few days ago and I’m still thinking about how it all unfurled nearly a week later while slogging through long days trying to meet deadlines. It’s a one-of-a-kind story told in a succinct manner, and if you’re at a point in your life where you’re stuck choosing between sleeping and getting a good gaming session in, this one’s for you.

For what it’s trying to accomplish and how it layered the subject matter, CRASH: Autodrive is truly deep for just how short it is. Of course, therein lies the clincher — as it has stated numerous times, it is, indeed, short. There’s plenty to investigate, a few mini-games, a couple of false leads, and tons of flavor text that really flesh out the world of 2027 Pittsburgh, but this game is less a full meal and more of a perfectly portioned dish you might order at a Michelin Star restaurant — it’s small, but rich, and those who appreciate the flavors will know when it’s time to stop eating. If you still value games as the quotient of pricepoint and hours spent in-game, you’ll likely still feel peckish upon completion. If length doesn’t deter you from a quality experience, don’t miss out on this mini mystery.

Full disclosure: This review is based on a copy of CRASH: Autodrive  provided by the developer.