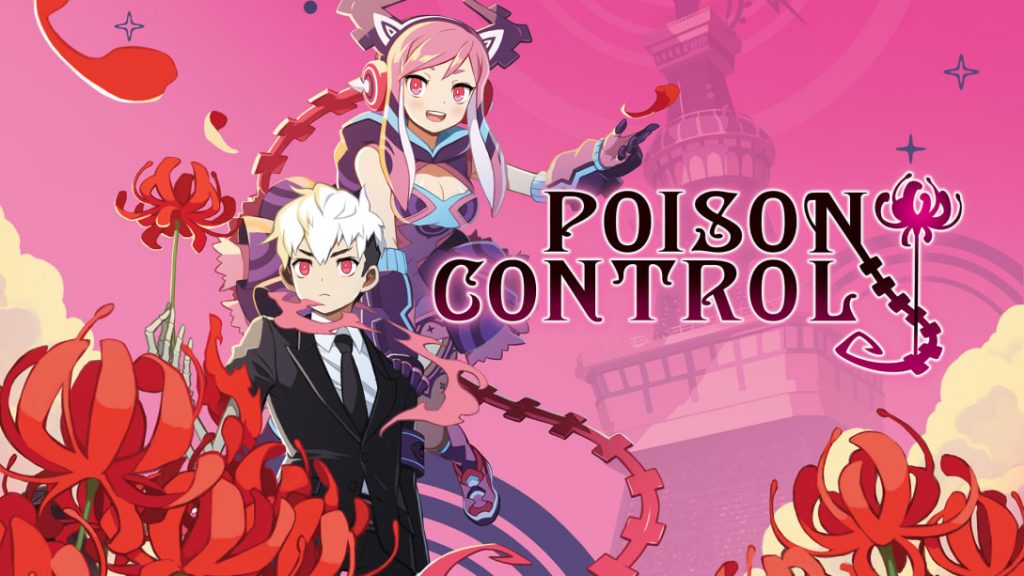 When you think “Nippon Ichi Software,” there are probably two things that come to mind; over-the-top RPGs (most notably Disgaea) and creepy-cute RPGs. Jumping straight to either of those two things would be just fine because it sums up most of the games that NIS develops. But every year, we get a game or two that can’t be placed into either of the “normal” NIS categories. Last year gave us Mad Rat Dead, and the year before that, we got Lapis x Labyrinth (to name a few). And what off-the-beaten-path title has NIS bestowed upon us this year? Why, the very game we’re looking at today—Poison Control!

I can’t help but feel like every time I play one of these NIS one-offs, I come out of it thinking, “I’ve never played a game like that before,” and Poison Control successfully managed to pluck out that thought from my brain once again. Sure, games about purging the personal hells of various girls—both dead and live—aren’t exactly a common thematic element within most games, but it goes beyond that. Everything from the story, to the gameplay, to the audio and visuals comes together to create a very unique—and unmistakably NIS-esque—experience. And, while it’s got a few issues, I’m glad that I got to play it. I really am.

Go to Hell? We’re Already There! 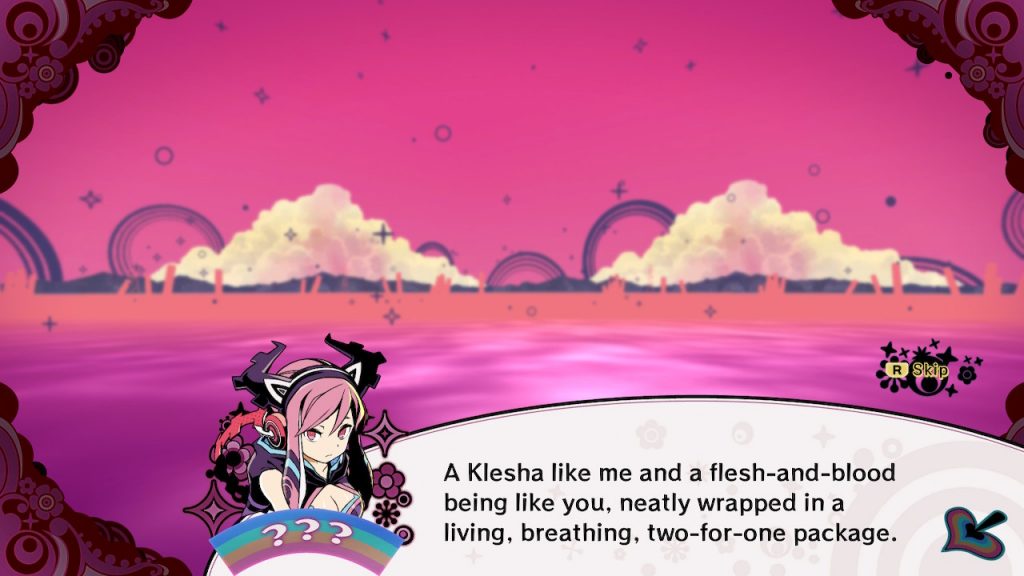 Uh, yeah, sure. Whatever you say, demon lady.

Poison Control‘s narrative is hella twisted (see what I did there??), and I mean that in several ways. The story itself begins with the protagonist waking up in the middle of a literal pink hellscape, bleeding profusely, when they are saved due to a creature known as a “Klesha” deciding to fuse itself to you forcibly. Not only does this decision immediately fix everything that was wrong with you, but it transforms the Klesha, allowing her to become reborn as a Poisonette—an entity whose sole purpose appears to be cleaning up the various personal hells popping up all around this girls-only underworld in hopes of eventually making it to heaven. And, of course, since the two of you now share the same body, you’re coming along for the ride, too.

For the most part, I really like Poison Control‘s story. Not only does it slowly feed the player an ever-expanding overarching story involving themselves and Poisonette, but it’s also packed with 20+ sub-stories—each of which plays out during their respective level. Despite this game drawing a large amount of inspiration from the novel Shoujo Gikogu (“Girl Hell“), Poison Control very much takes control of its own narrative to deliver something truly unique. Because of the consistently changing perspectives given to the player within each level—called a “Belle’s Hell—you never know exactly what you’re in for until you jump into the thick of it. And the main story—while a little convoluted toward the end—was incredibly entertaining as well. I don’t normally say this for most games, and you’re free to take this however you’d like, but I’d suggest playing this game for its storytelling prowess alone.

I’m My Own Worst Enemy 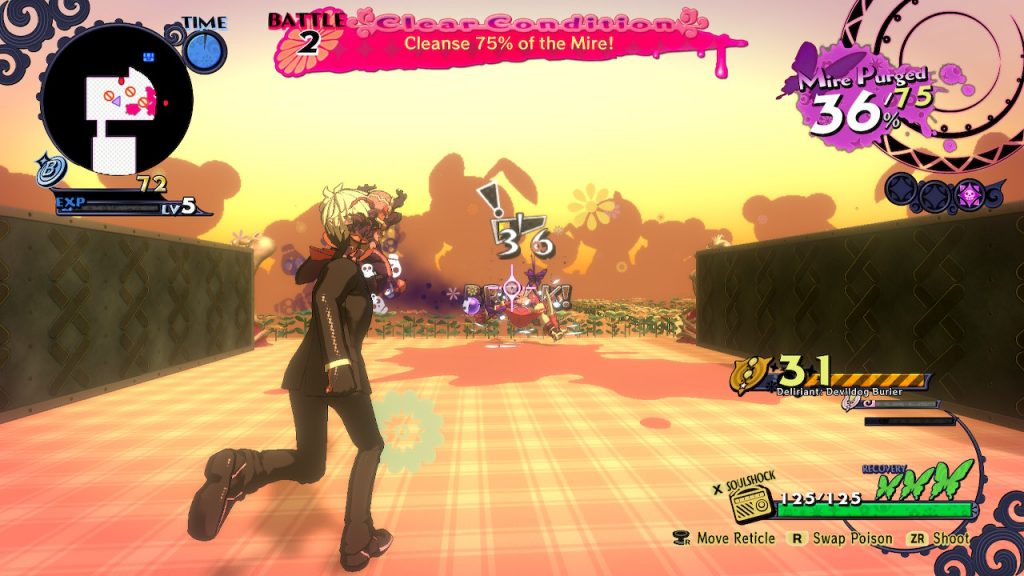 Don’t let the pretty colors distract you from the blood-thirst enemies!

I’m going to be real with you guys, here, and just say that I’m not sure what to classify Poison Control as. Its official website says that it’s an “Action Shooter,” and I guess that’s technically correct. I mean, there is a lot of action, and you do gun down baddies on a regular basis, but that’s not all that this game has going on. Poison Control is level-based in its approach, with (almost) every level being an entirely self-contained Belle’s Hell. The point of each level is to purge the Belle’s Hell that you’re in of its toxic thoughts and emotions, thereby granting spiritual and emotional freedom to the trapped soul within.

Ironically, despite the tortured emotional states of the souls that you’re aiding, purging a Belle’s Hell is actually pretty straightforward. A large portion of Poison Control is focused on good old run-and-gun action, with an approach that feels almost arcade-like. However, while this sounds just fine in concept, its execution feels a little lacking. A lot of the blame for this can be placed on the controls. While I wouldn’t outright call them “bad,” movement and aiming both feel incredibly stiff. While Poison Control doesn’t require a lot of precise movement, the times where it does always felt like a struggle because of the innately high directional input sensitivity. And, seeing as how you can’t adjust this at all, you’re basically forced to rely on aim assist at times. 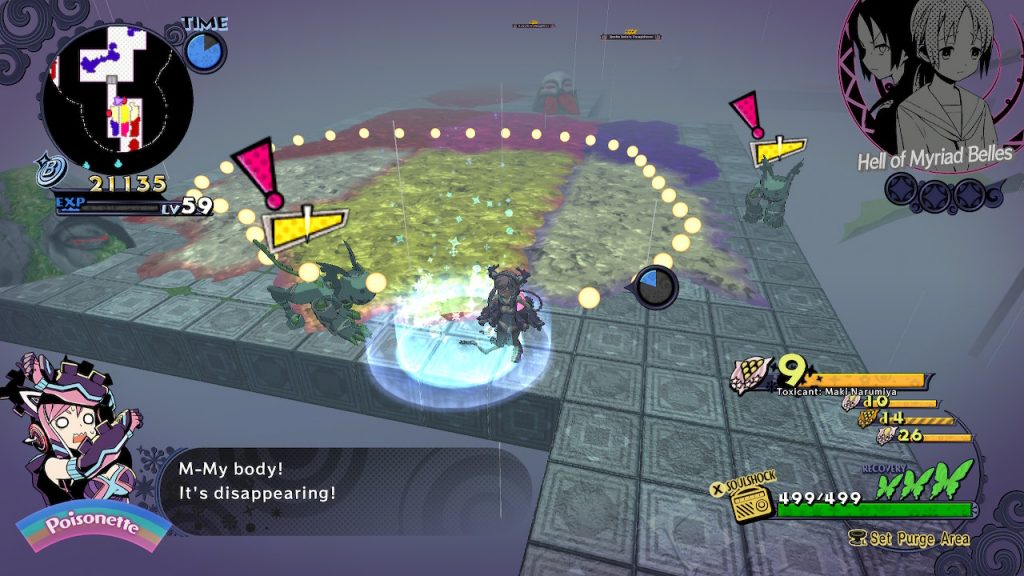 Remember to circle around a mire when you can—you’ll clear all of it that way!

The other major gameplay of Poison Control involves, well, controlling poison! Despite being rooted in mental anguish, the level of toxicity within each of the Belles’ Hells is so high that they literally become toxic themselves—resulting in all of them being covered in poisonous mires. Naturally, being a type of otherworldly poison, your character’s human body can’t stand walking around in the mires for too long. Fortunately, you’ve got Poisonette on your side. While your character is tasked with killing Kleshas, Poisonette’s job is to get rid of floor hazards by doing the one thing that you can’t—walk around on them. Not only do mires that Poisonette walks over become purified after you recall her, but you can even regain health and speed up your reload times by doing so.

Purging is a straightforward mechanic, and it can get tedious at times (especially if you feel the need to clean everything). I would argue, however, that it actually ends up being beneficial to the game overall. As you progress, the game forces you to take a tactical approach to cleaning by throwing you into areas that contain both a lot of enemies and a lot of poison. This, then, creates periods in the game where you need to “manage” your resources—do you want all of the poison gone, now, or should you wait until you’re low on health/out of ammo? While it doesn’t entirely compensate for the stiff controls, the multitasking that Poison Control forces upon its players is not only simple and effective but fun. It might not sound like it based on my description alone, but I promise it’s more enjoyable than you might think. 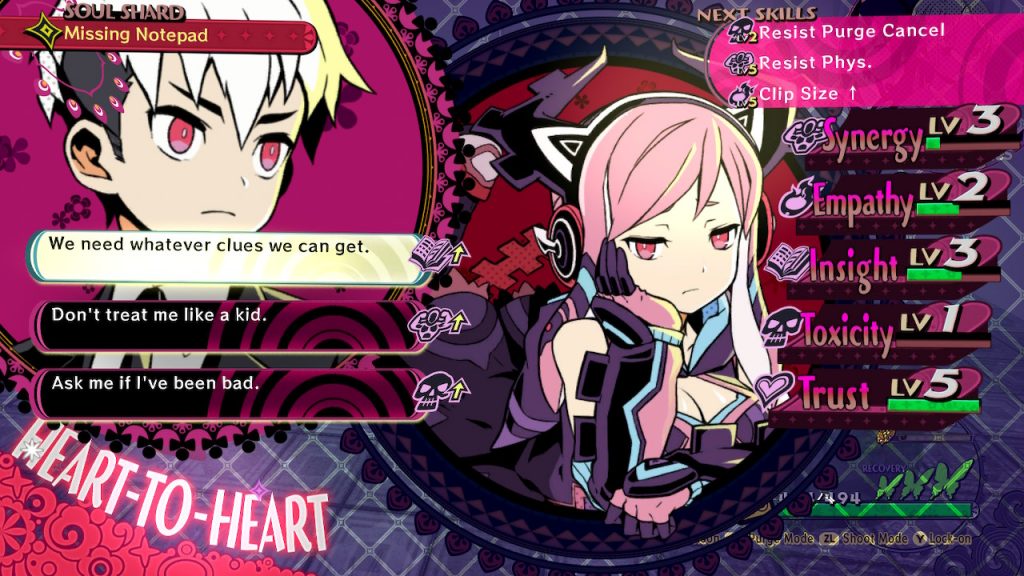 For once, there’s no such thing as a “wrong answer!”

Do you like dating sims? If you like Japanese video games, the answer to that is probably “yes.” Well, Poison Control doesn’t have a dating sim mechanic. But it does have something called the “Heart-to-Heart,” which is kinda-sorta similar! Every so often, within most levels, Poisonette will pop up on your screen to make a comment regarding the current situation—to which you’re allowed to respond! Unlike with most dating sim/VN games, however, you won’t necessarily be picking your answers to cozy up to Poisonette.

Instead, your answers will grant experience to one of your five oddly named stats (pictured above), which, when leveled up, grant you many bonuses—including permanent upgrades to things like HP or clip size or new passive skills. And, no, you won’t be able to level up everything. While a shooter doesn’t need something like the Heart-to-Heart mechanic, it fits surprisingly well with the rest of what’s going on in Poison Control. I’m just sad that it didn’t feature more stuff like this.

A Little Bit of Toxicity Never Hurt Anyone, Right?

Poison Control could have been better. The controls weren’t polished enough, and the levels—despite boasting some amazing aesthetics—were fairly same-y. But that doesn’t mean that Poison Control is a bad game. In fact, I really liked it—and I think that a lot of pre-existing NIS fans will, too. If you’re looking for games based on mechanical execution alone, Poison Control might not be your thing. If you want something with a lot of heart, however, and don’t mind the imperfections, then I would absolutely suggest diving headfirst into this little slice of Hell.

Full disclosure: This review is based on a copy of Poison Control given to Hey Poor Player by the publisher.

Deathloop Review: Prepare To Die   It almost feels strange sitting down to write a review for Deathloop in September, 2022. Having originally released for the PS5 a year ago, Deathloop was a…