Quinterra Is Ambitious But Requires Balancing

A Fantasy Board Game Comes To Life 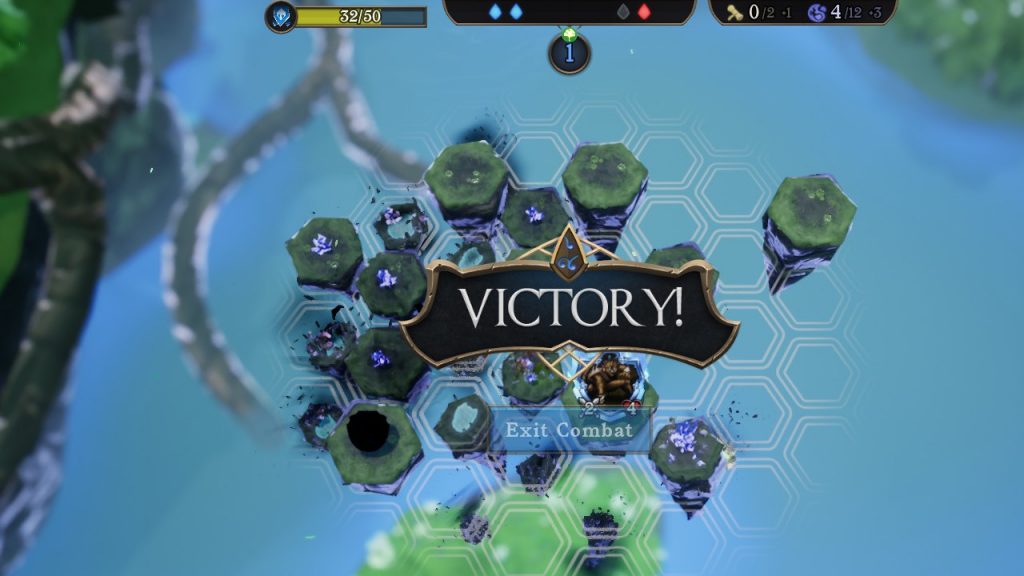 This Quinterra preview is for a strategy game developed and published by Sidereal Studio. I had high hopes for the game when I took it on this assignment. After all, I’m a fan of strategy games and deck-building games. Regardless, something about this particular strategy game just didn’t speak to me, at least not yet. 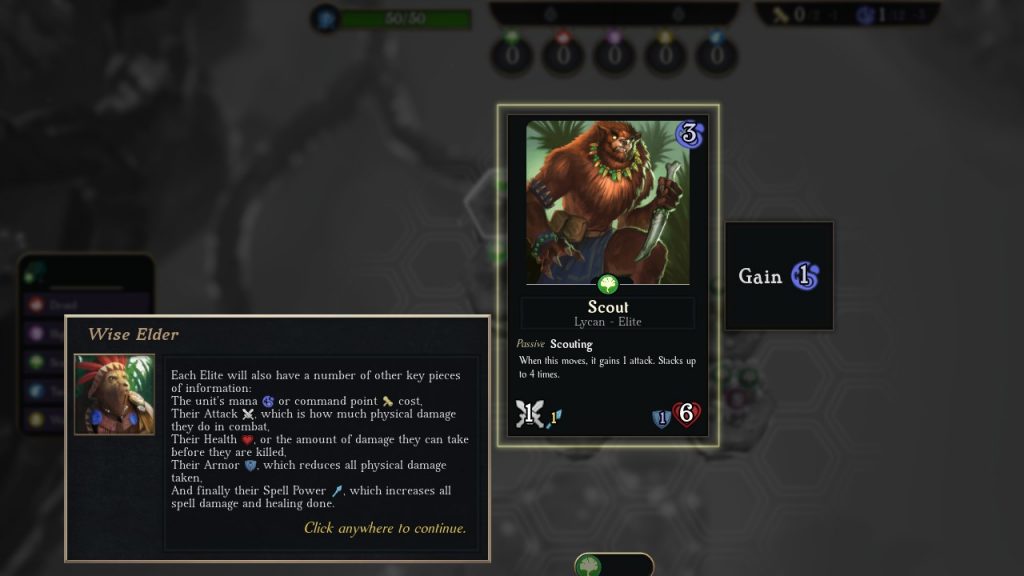 First, let’s touch on the positive aspects of the game. Quinterra is a roguelike strategy game with card mechanics. At least in theory. In execution, I find it’s less about deck building than most deck builders I’ve played. You don’t start out with choices of cards to include in your deck. Despite Quinterra including 4 playable species (Lycan, Imps, Crystalians, and Ethereals), you don’t get to choose one at the outset. After the very complex tutorials (more on that later), you are saddled with a Lycan deck, which only includes a handful of Elites and Minion cards. I was honestly surprised, and expected the game would allow me to pick from one of the 4 species when I started in earnest. Regardless, the game does have an ambitious scope and nice visuals. 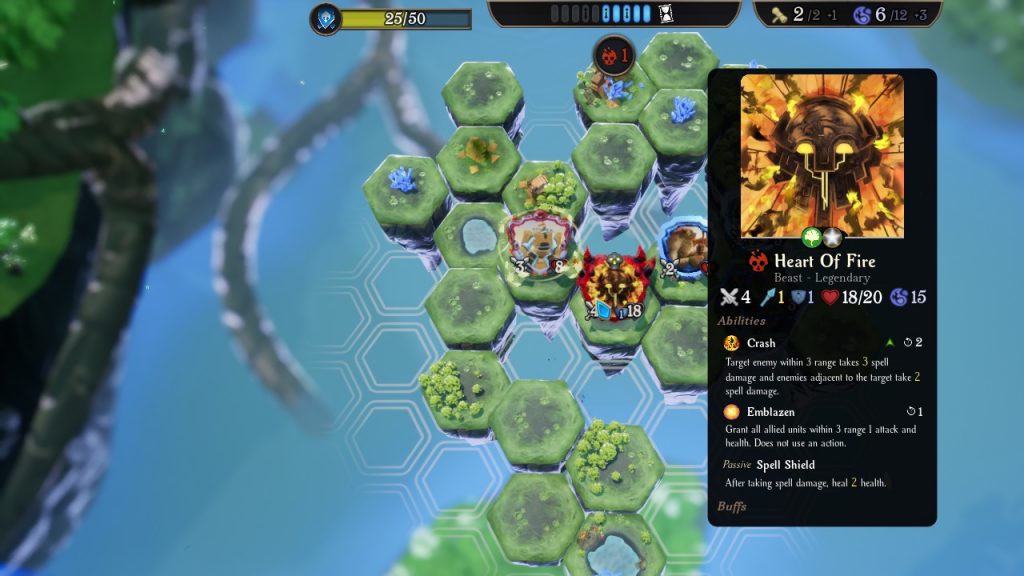 I’m not against a game being complex or hard, at least not by default. What bothers me is when a game feels hard for hardness’s sake. Or worse, when a game is overly complex in a way that makes it a chore to play. And usually, I like games that have tutorials. I don’t mind if my hand is held, so long as I leave knowing what to do. Quinterra has the worst of both worlds, and has an excessive series of tutorials that, despite me getting the gist of them, I nevertheless was left ignorant of the game’s nuances. If that sounds confusing, let me put it this way – there’s a big difference between comprehending the mechanics of a game and truly understanding them.

As a good example, let me touch on the drafting system the game uses. For some reason, the order you can draft Mana Elements in is important. You must have all but one Element match to draft more of them. So you could draft Fire, then Fire / Water, then Fire / Water / Earth. By drafting multi-Element tiles, you can also get Crystals to empower your units. The reason all this is relevant is the drafted Elements are used to summon your Elites. Since most have their own Elemental resonance, you can’t summon them unless that Element is drafted. And if that sounds complex, rest assured I’m more confused than you are by this mechanic. 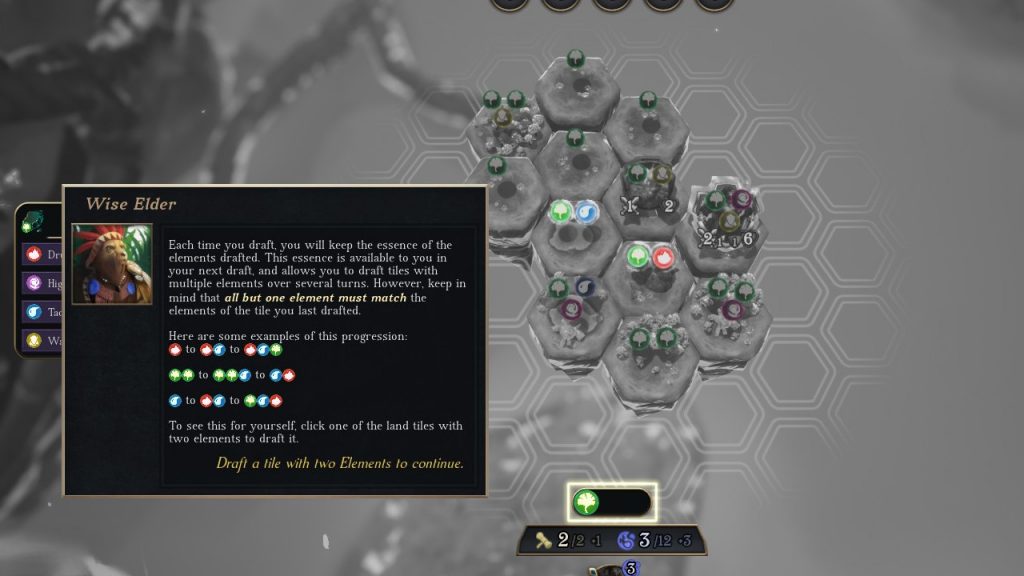 If that wasn’t enough, did I mention there are two types of energy? There’s the Mana Elements, used to summon Elites. But there’s also something called CP (Command Points) used to summon Minions and erect structures. I found that incredibly awkward. I’ve played plenty of card games in my years, and I’ve never seen one that has a bifurcated energy system. Reason being, it makes things unnecessarily difficult. Also, you can only summon 1 copy of any Elite and 2 of any Minion at a time. On the plus side, you do generate 1 Command Point and 3 Mana each turn. But to make that less relevant, you can only store a maximum of 2 CP and 12 Mana. I was never able to stock up nearly that much and typically was expending CP and Mana like crazy just to try and deal with my AI opponents. One big reason for that urgency is that you and your opponent can literally summon any unit anywhere on the board. Granted, they can only move, attack or use an ability each turn, but it’s still terrifying an enemy can appear instantaneously right next to you. 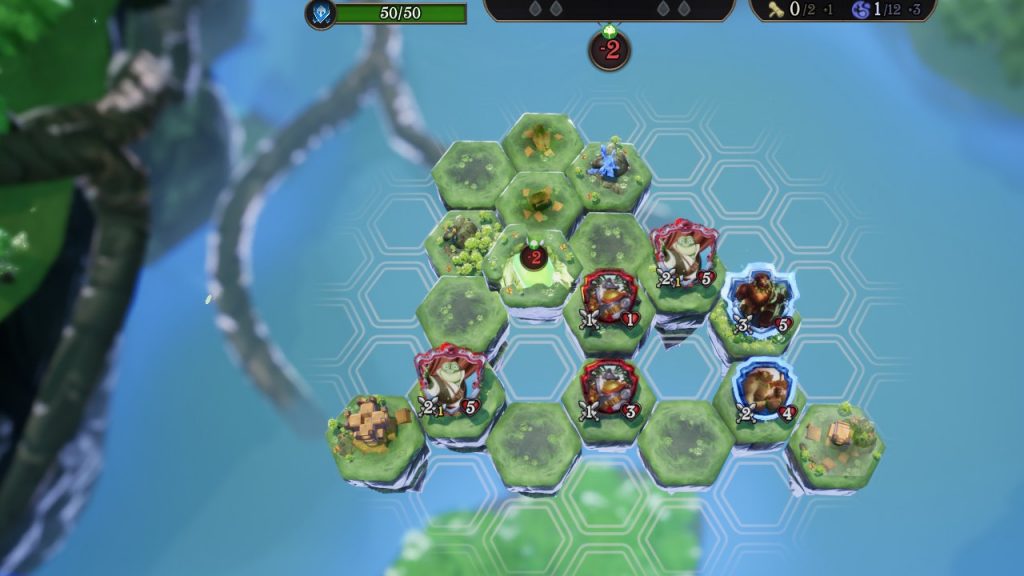 Then there’s the Morale system. Basically, it grades you on how well you’re playing, and doing poorly lowers your Morale. When it goes to zero, it’s game over for your quest. But there’s plenty of other ways to fail. Sometimes you’ll need to get the most Victory Points to win a battle. That means having more units on the board than your opponent at the end of your opponent’s turn. Considering you play before your opponent each turn, that can be a hassle. The types of battles I preferred were ones where you got to defeat one particular foe to win the mission. Oh, and your Morale can be increased at some locations or by defeating a boss. But it’s very easy to lose all your Morale long before you get that far in any expedition. 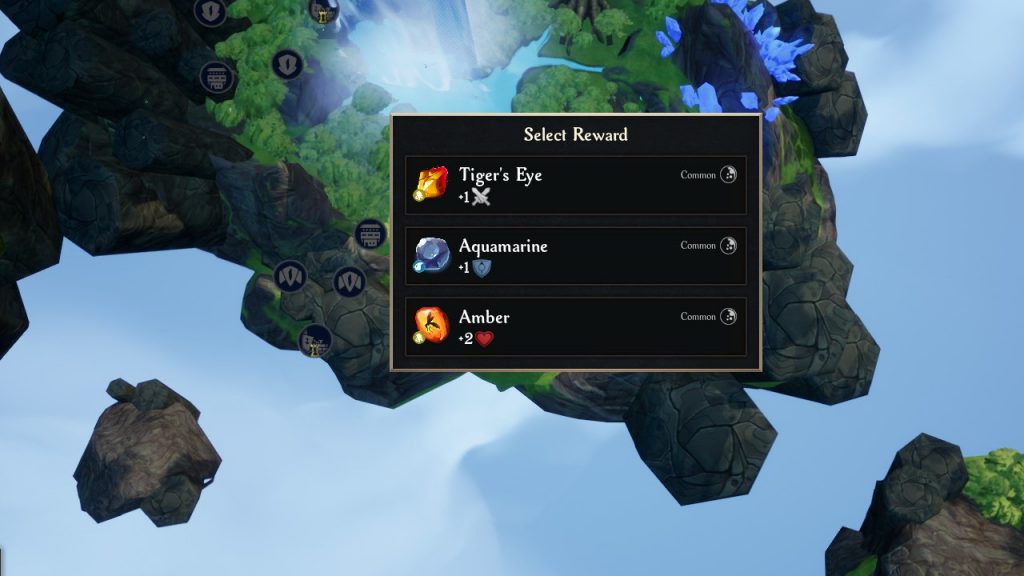 While I felt like I slowly started to understand the game as I played, I never felt like I truly comprehended what Quinterra had to offer. I won a few battles and lost many more, but I always felt like a novice, partly due to my lack of understanding, and partly thanks to poor design choices. As an example, if you lose a unit in battle, it will cost you progressively more each time you summon them that battle. I also was a bit perplexed how drafting Elements caused land tiles to drop away, but only until the start of your opponent’s turn. I was hoping to use the hole in the map as a tactical tool, but it seems to have no real function.

I also just got frustrated by how much more capable the AI was than my team. I lost the very first battle after the tutorials ended. Then on another early mission, I faced one foe with 2 armor, which essentially prevented all but one of my Elites from doing any damage to it. While I didn’t mind the rogue features, they also didn’t do much to make the game any better. You can explore branching paths on the world map, and once you move on, past areas are locked out. Plus, I just never had enough cash to buy much of what I needed to succeed. Sure I got some free stuff from bonus locations, and shopped a little, but it wasn’t enough. I was also irritated how you can’t explore bonus locations until you defeat any combat nodes nearby. 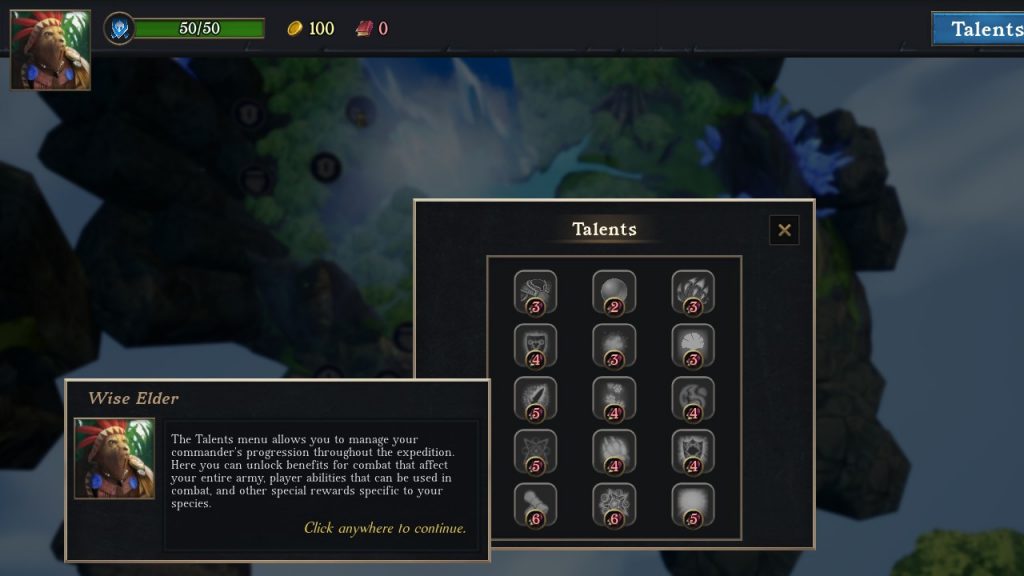 One of the areas that Quinterra does well is the visual side of things. It’s an attractive, albeit simple, game. The design for the assorted Elites, Minions, and structures look great. The music is a little muted, but sound effects do a decent job of punctuating the action. Honestly, it’s not a bad-looking game by any stretch, but the art and music can only do so much to bolster the other problems. Though I will say, the mouse controls are easy to pick up and comprehend.

Now to be fair, I know for a fact Quinterra is regularly updating the game and adding content. So it’s my hope that even as I write this, Sidereal Studio is working on many improvements to the game. But until they’ve done a lot of work, this is a hard one for me to recommend. Especially since they don’t even explain why there seems to be mechanics like summoning sickness for activated abilities. Quinterra has the potential to be a great game. I just hope it can reach it.