Adventures in an Arcade 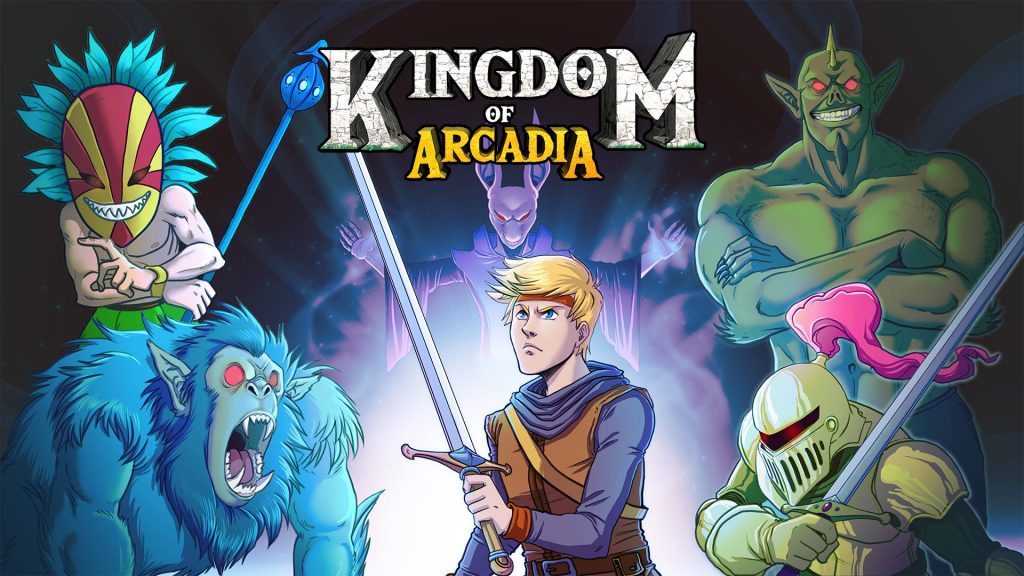 Parents can be such a drag, especially when they withhold awesome secrets from their kids. Sam, a mischievous kid with a penchant for video games, finds himself in such a predicament in Kingdom of Arcadia. His dad has a super cool arcade game in the garage, but Sam isn’t allowed to touch it. Being a responsible parent, Sam’s dad tells him that he’ll be allowed to play it when he’s ready and that it will be the best experience of his life.

Great parenting, Dad. Everyone knows that the best way to stop a kid from doing something is to make it sound even more awesome. Naturally, Sam turns it on the second he’s home alone, and he gets absorbed into the game. I feel like there’s a lesson to be learned here, but I can’t possibly fathom what that might be. Act recklessly and cool things will happen. That’s probably it.

The Hero of Prophecy 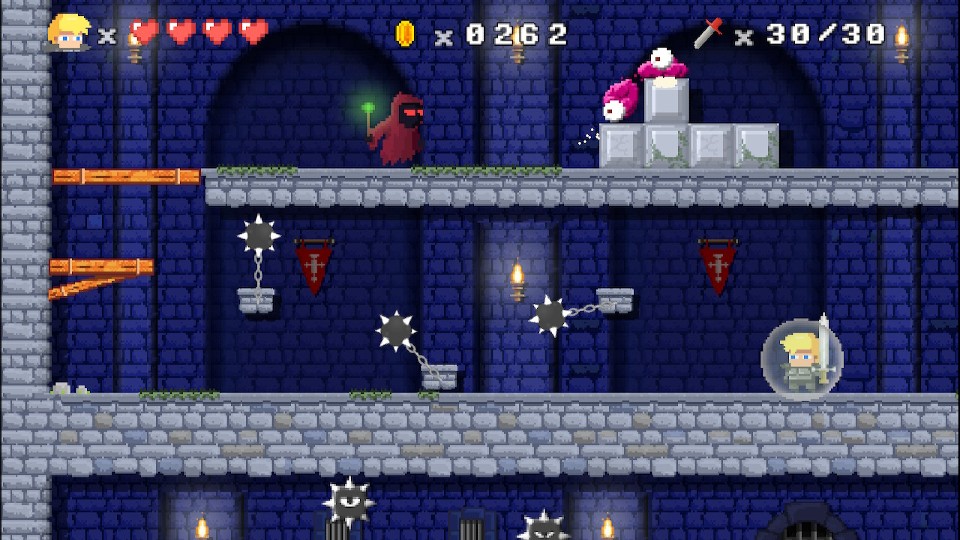 As it turns out, Sam is the hero of prophecy who has come to save Arcadia and its five kingdoms. Each kingdom is ruled by a king and has a wizard who possesses a powerful staff, and whoever has them all has enough power to rule all of Arcadia. Draken is one such wizard, and he’s decided that now is a good time to usurp all the other kingdoms. If that interloping jerk manages to get all the staffs, he’ll turn Arcadia into “an inhospitable and murky place,” which is odd because I’d turn it into literally anything that isn’t that. It’s a bad plan. He’ll still have to live there!

Despite being sucked into a video game, which would be terrifying to normal people, Sam’s cool with all this. He has to get all the scepters to return home, so he gladly sets off on this adventure that’s been thrust upon him by pixelated strangers. What a weird, good kid. 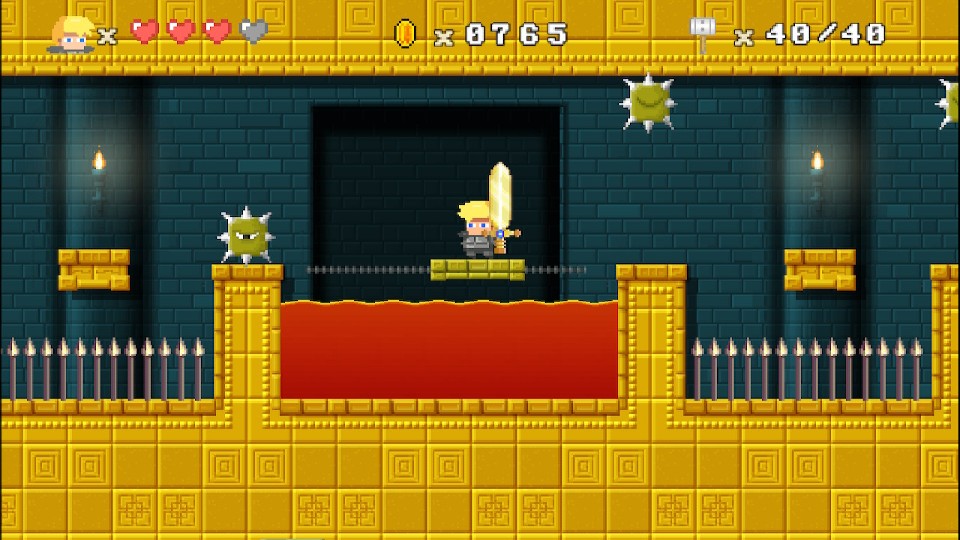 Kingdom of Arcadia is a retro-styled action platformer that’s familiar to anyone who has played any other game of this type within the last 20+ years. All the expected elements are here: hack and slash through enemies, double jump over obstacles, swing from ropes, upgrade your equipment, and fight massive bosses. The game’s twenty levels provide a decent play time, and there’s a special coin to find in each. Sam’s equipment (sword, armor, and sub weapon) can all be upgraded with the money you earn from slaughtering everything.

The level designs start out straightforward enough, but it doesn’t take long for them to turn into sprawling mazes with locked doors that require switches to open. There are also breakable walls that conceal treasure chests full of cash, hearts, and sub weapon refills. Enemies are your standard platforming fare: some walk aggressively at you, some jump, some throw projectiles such as snowballs, spears, or magic shots. There are plenty of old favorites too: spear-wielding skeletons, floating skulls, bees…

I’ve Been Here Before 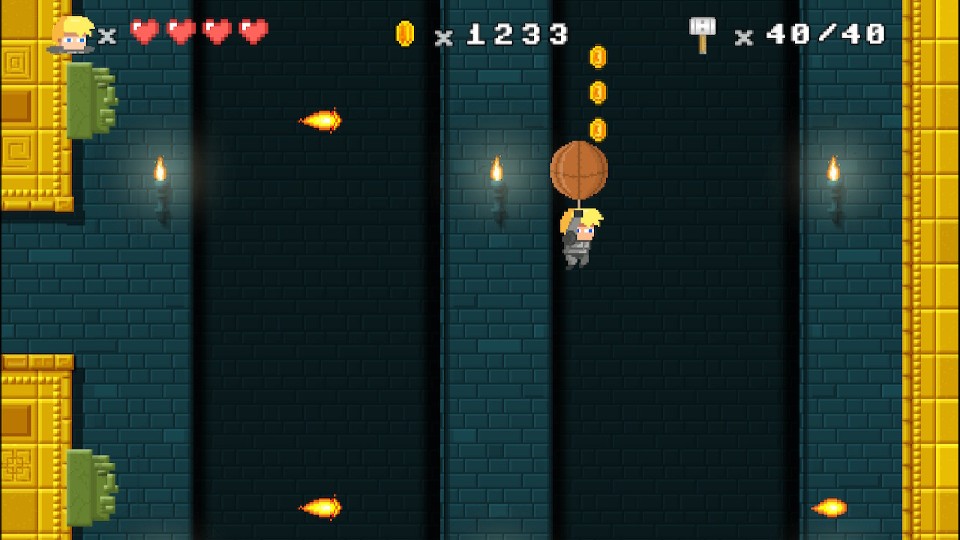 Kingdom of Arcadia’s gameplay is solid enough, but its shortcomings quickly become clear: it’s just too simplistic. None of the enemies provide a challenge. If you swing your sword fast enough, you’ll rarely take damage from the front even if they gang up on you. The platforming is fine but unspectacular. There are plenty of nods to Mario, too. There are Thwomp-like enemies, moving platforms over lava, elevators, and spinning spiky balls on chains. Sam does get to travel by balloon in a few instances, but even that isn’t extraordinary, even if it does provide a little variety.

Each level blends into the level before it and after it. Even between worlds, the levels all feel the same. They do become more difficult, but you’re still fighting similar enemies and navigating the same obstacles. Locked doors are the only variable, and the switches are never that far away. There’s little incentive to explore because the level design is so linear. There are a few branches off the necessary route, but they usually end in money or health. There’s no sense of wonder or surprise here. Every kingdom feels identical to the last as well. You never meet any of the other kingdoms’ inhabitants, and you have to wonder if anyone actually lives in these places. Each kingdom feels like its own dungeon.

Even the bosses are familiar: a knight, a shaman, a goblin, a wizard…I’ll admit the yeti is a bit out there, though. These bosses provide the only real challenge in the game, but even here, there’s nothing you haven’t seen before. They all have predictable attack patterns, and if you manage to die, you can just immediately try again.

I Stab at Thee 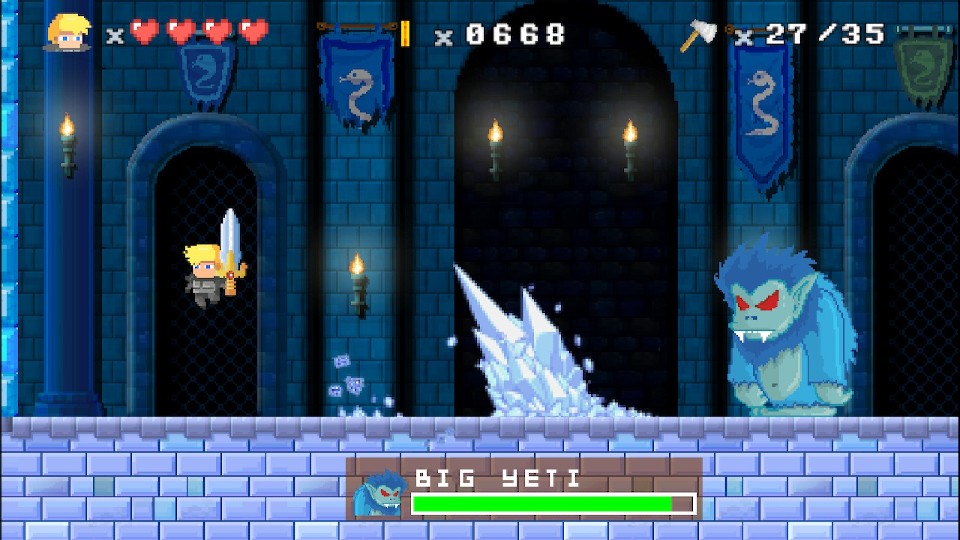 Kingdom of Arcadia’s combat is as straightforward as it could possibly be. Slash to attack and move away as necessary. There’s no dodge move, additional weapons, or equipment. The sub weapon is useful for attacking from a distance, but it also never changes, even when you upgrade it. It only ever flies in a straight line until it hits something. You have a limited number of uses, but plentiful treasure chests ensure you’ll rarely run out.

Even upgrading is a double-edged sword. It takes a fair amount of money for each upgrade, so there’s some incentive to explore, find every chest, kill every enemy, and amass as much money as possible. The downside is that upgrading makes an easy game even easier. I upgraded when I was able to do so because I assumed better equipment wouldn’t just be a stat upgrade, but that’s all it is. Regular enemies rarely posed a threat to me, and while the bosses are more formidable, they also have an annoying habit of periodically standing in place. I was fully upgraded at the end of the game, and I pretty much just stood next to the final boss and slashed, slashed, slashed until he died.

If you decide to forego any upgrades, that’ll certainly make it more difficult, but it won’t make it a better game. Add to this that not upgrading removes any incentive to explore, further streamlining an already straightforward experience. 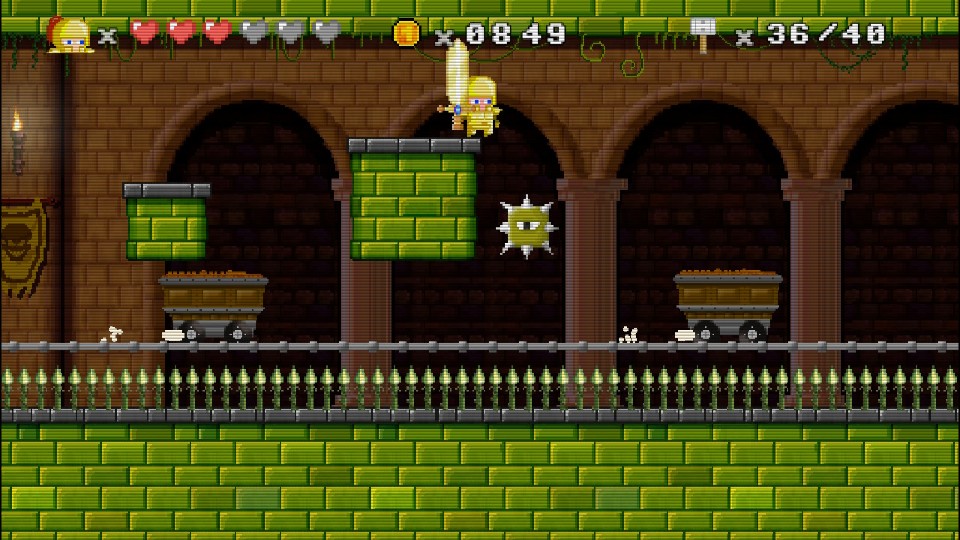 It’s not entirely accurate to describe Kingdom of Arcadia’s gameplay as a Metroidvania. The levels aren’t connected, there are no new weapons or items that let you access new areas, and there’s zero reason to go back to a level after you beat it. The only backtracking you’ll do is to go through a doorway you just opened after you hit a switch, and you’ll do that constantly.

Kingdom of Arcadia’s retro art style and soundtrack are inviting enough at the start, but both quickly become repetitive. The same song plays for every level in every world, including boss fights, which means you’ll hear the same song the entire time you’re in a kingdom. There’s nothing memorable about them either. They’re short, they loop, and they’re very much what you’d expect to hear from an old arcade game. I guess that fits the theme, but that’s little consolation.

There’s a little dialogue at the game’s beginning, after each world, and at the ending. Unfortunately, a rough translation results in numerous grammatical errors and incomplete sentences; it’s difficult to understand. It’s obviously not game breaking, but I found it distracting.

Kingdom of Arcadia unfortunately does little to elevate itself above the scores of other action platforming games just like it. It fails to take advantage of its setting, which could have resulted in a unique experience or at least something a little less predictable. It’s mildly amusing at best but derivative of everything that has come before it.