Don’t go with this Flow 🙁 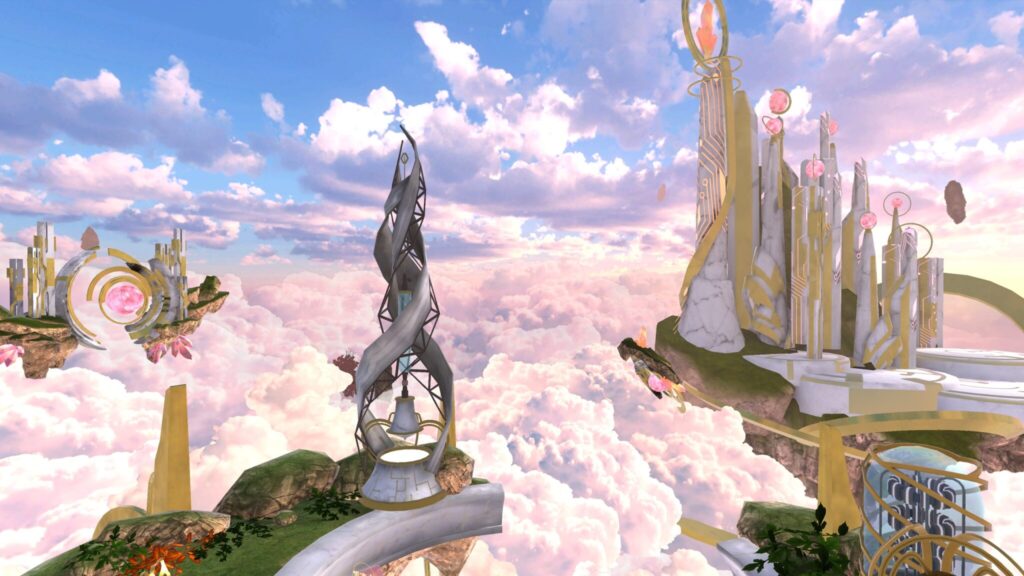 It wasn’t that I wanted to love it — I did love it. I still love it. I do love it. It’s got a fun premise, gorgeous environments, and sensational world-building. There’s so much potential not only as a game, but as a springboard for further creative projects that I’m glad I got to at least experience it. But there are too many problems holding it back — including a game-breaking bug that prevented me from seeing the ending, lest I want to start the adventure all over again.

Allow me to explain.

Flow Weaver follows the story of a young magic-wielder of sorts who can see into the fabric of the multiverse. Using her Dreamscape, she can visit different universes connected through the hub of the Material World. About to pass her magicks classes, she decides to prove to herself that she’s able to harness this incredible power and take a trip into a universe at random, only to find herself suddenly captured. Trapped in a store room and unable to move from her seat due to a mysterious barrier, she is initially only able to utilize what is within reach; eventually, she is able to gain new powers that enable her to manipulate things in her environments. By traversing the available planes and finding mystical runes, she will be able to free herself from this mysterious prison and find out why she was captured in the first place. 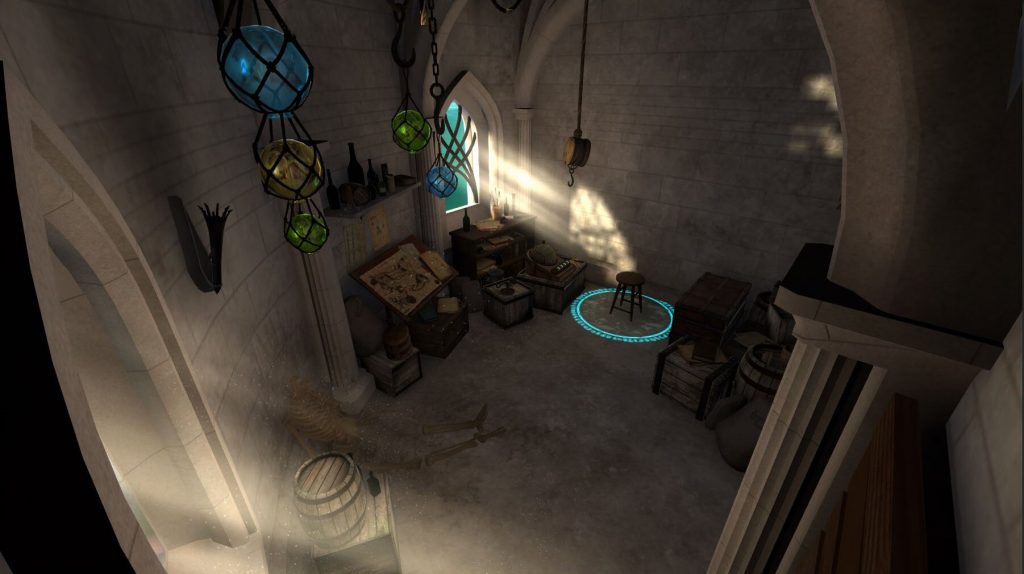 Controls are somewhat explained — players are told what to do in text hovering over the controllers, but the first tutorial steps aren’t fully communicated. When I first learned the “Shadow Hand” technique, I was taught how to initiate the technique and how to grab a far away item, but bringing it towards me wasn’t explained; additionally, the hint system is practically non-existent until the very end, so I spent an awful lot of time in the beginning figuring out really basic stuff. And that hint system at the end? It’s the character saying the exact same line over and over and over again if you’re holding a specific item. Frustrating and annoying to say the least.

Escape rooms are supposed to be a puzzling, challenging experience, and Flow Weaver certainly fulfills this through normal gameplay. Players will find items in one universe that may hold some significance in another; for example, a bottle of wine found in the Material World’s store room will be well-received by the trickster fairies in the Fey World. However, certain aspects of Flow Weaver’s puzzles aren’t all that straightforward and can easily be mistaken as bugs due to the game’s existing issues. Too many times I struggled with a simple puzzle like a code surrounding fireflies or a seedling from an acorn because quite a few things just don’t stand out as connecting to each other. I found myself fumbling around for up to an hour on an issue before pulling off the headset and googling a walkthrough, frustrated at how simple the answer should have been had things been better communicated or some inexplicable coding issue blocking my way forward. 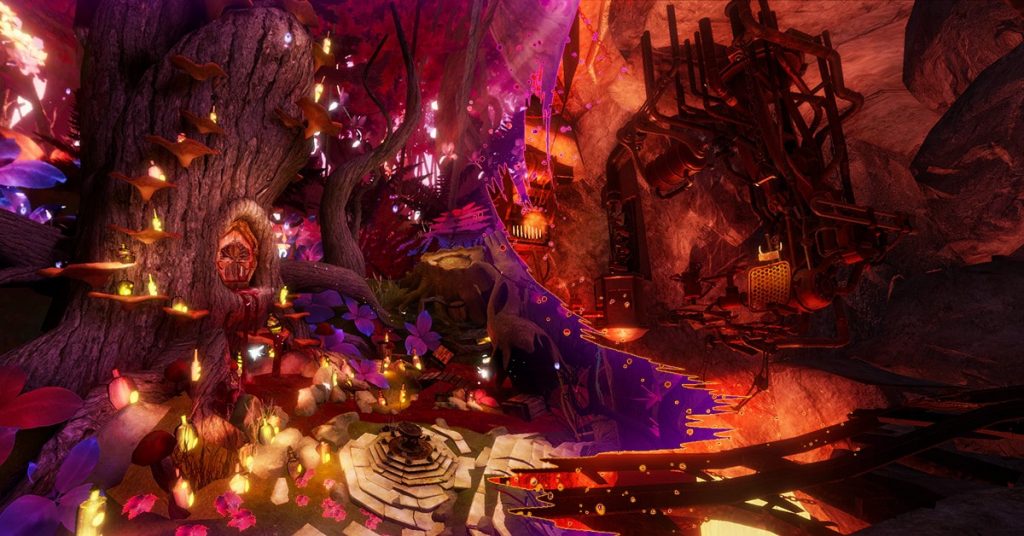 Now when I say game-breaking bugs, I unfortunately ran into two — one that was eventually solved by exiting out of the game and re-entering an autosave state not too far from where I was. Unfortunately, the other one just completely froze the game, my only recourse being to just start fresh from the beginning and hope I don’t experience it again. To briefly explain, players require five runes to break free from their magic prison, and each time you get a rune a memory from the captor’s mind is played. For some reason, on my second rune, both the second memory and third memory were unlocked. When I gathered the fourth rune, I was technically free, but obviously from a narrative perspective I still had to get the final rune. Once I picked up the final rune, the game froze, and I realized I’d have to play through all over again to see the conclusion. After fumbling with issues and bugs for three hours, I couldn’t bring myself to restart and just shut it off. I’m sure I can guess what happens next.

It’s so sad to write about Flow Weaver like this — it’s such a beautiful game. Beautiful! There were parts that literally took my breath away. It’s fun, it’s colorful, it has seriously incredible animations when you transition between worlds and I genuinely felt like I was capable of wielding powerful magic. I loved the characters, I loved the concept, and I really thought the notion of being trapped in a chair lent to a seated puzzle game in such a clever way. But while I get that VR games aren’t always the smoothest experience, Flow Weaver tested my patience more than my wits. From a developer standpoint I can appreciate how hard it is to even ship a game and commend the aspects that do work, but despite its beauty, as a gamer I would probably ask for a refund.

It never feels good giving a negative review. I sat on this for a full day, agonizing over scoring such a beautiful game poorly. But what other choice do I have when I had to restart multiple times for even a shimmer of hope to finish what I started? It’s possible Flow Weaver isn’t optimized for the Oculus Rift S despite what the website states, so if you have an Oculus Quest or Oculus Quest 2, perhaps you won’t experience the bugs I did. I do see on the game’s Oculus page that the dev team is working hard at tackling bugs, so if this even remotely interests you (which, for real guys, it has potential), keep an eye on it and check back in a month or two. But as it stands, I regrettably cannot recommend Flow Weaver in its current state.

Editor’s note: This review is based on a retail copy of Flow Weaver provided by the publisher. 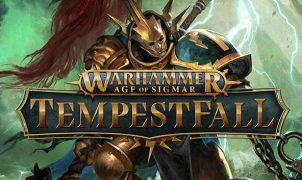 Goin’ Hard In The Paint Valve’s breakaway hit Portal has left an undeniable mark on the puzzle game genre since it first released in 2007. And while there have…