Time for a confession: I suck at platformers. I’m stunningly mediocre at Mario, and once it gets any more difficult than that, my skills (or lack thereof) quickly become an embarrassment. So I was a little nervous about tackling Wayward Distractions’ Space Otter Charlie. Nervous, but also, look at that adorable ottery face. How could I possibly say no? That, and I firmly believe it’s good to try and branch out into other genres now and then to see what you could be missing. 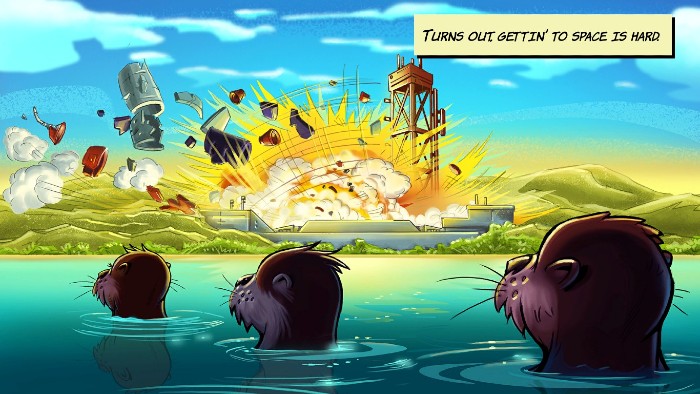 Space Otter Charlie is almost stupidly, painfully adorable. The humans have all left Earth, and the otters are desperately trying to find a way to get off the planet. After several explosive mishaps, they finally manage a successful flight into space – the eponymous Space Otter Charlie. Now it’s up to Charlie and his crew to find a new planet to call home. And that’s pretty much the whole story. It’s simple, but it’s cute, and it works perfectly fine for this game. 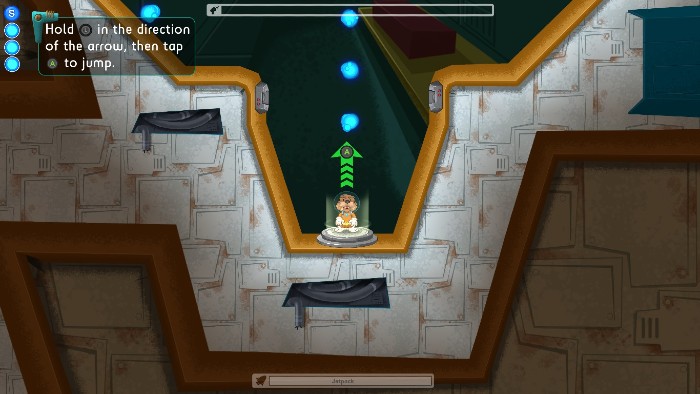 With any platformer, the gameplay is where the game is supposed to shine, and Space Otter Charlie is no exception. In fact, I don’t think I’ve ever played a game with mechanics quite like these ones. Since you’re in space, the environments are all zero gravity. So how’s a poor otter supposed to get around? Thankfully, Charlie’s got a pair of gravity boots that’ll keep him anchored to the ground. Or the wall. Or the ceiling. Well, any surface, really. When I say anchored, I really mean anchored, too; Charlie is unable to walk left or right once you’ve attached to a surface.

But never fear! Charlie can launch himself off of any surface. When you do so, it’ll send him flying in a straight line until he hits something else. Well, okay, not exactly a straight line, because you do get access to a jetpack that’ll let you make adjustments to Charlie’s trajectory. That’s right: a space otter with a jetpack. Seriously. I know I’ve said it already, but this game is just bursting with adorability. The jetpack works pretty well, too; while it doesn’t really allow for fine motion controls, it can definitely stop you from flying face-first into a death laser and help you alter your trajectory enough to keep you from taking a buzz saw to the gut. 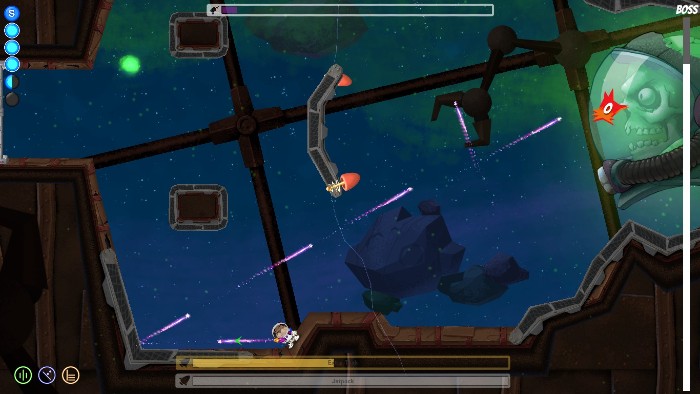 Oh, did I mention that there are enemies? So, not only are the environments full of obstacles like electrified surfaces, broken fuel pipes that shoot deadly flames, and barriers made of instant-death lasers, but there is a multitude of enemies as well. Some of them are robotic (the aforementioned buzzsaw is actually a machine coated in terrifying blades), some are organic, and some are organic-ish (we’re talking space ghosts, folks).

Conquering the Ottermost Reaches of Space 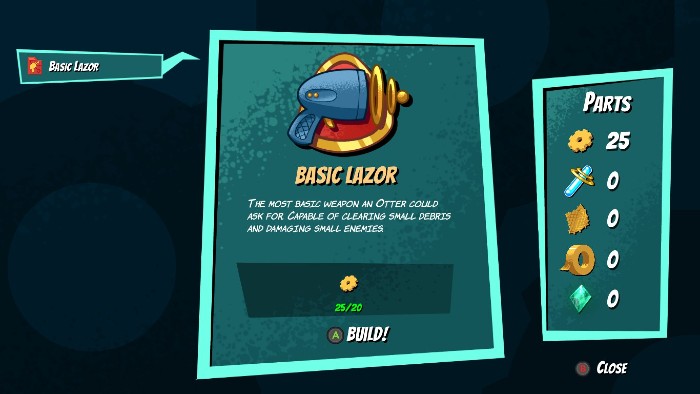 Thankfully, Charlie’s not helpless. Our hirsute hero gains access to a space blaster to help mow down enemies and certain obstacles. Faced with a wall of space garbage and detritus? Space blaster! Bladed machines of death and obnoxious space ghosts getting all up in your snack mix? Space blaster! As you progress through the game, you’ll unlock additional weapons, including an incredibly handy laser gun that shoots lasers that can be bounced/reflected off certain surfaces. You’ll also occasionally run across a sea urchin in space (because space sea urchin doesn’t roll off the tongue as well), and when eaten, you’ll get an awesome, if temporary, boost in your firepower. 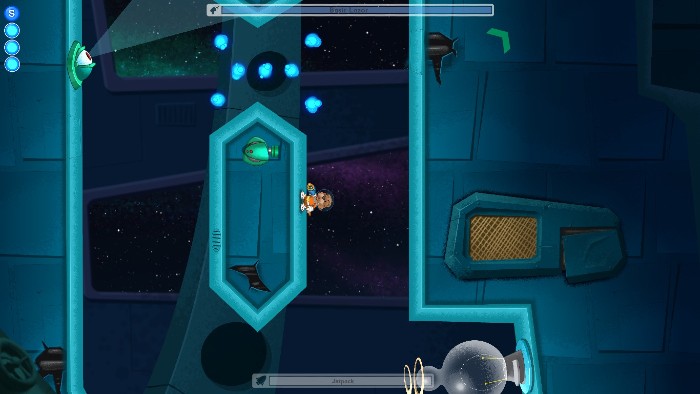 When defeated, enemies will drop either energy orbs or various gears, what looks like golden duct tape, and other random bits and bobs. It’s important to collect these remains (for lack of a better word) as you’ll need them to upgrade your equipment. As you explore, you’ll come across various plans that will allow you to either craft a new piece of equipment, such as a new weapon, or upgrade an existing piece of equipment. This can range from powering up one of your weapons to upgrading how long you can keep your jetpack running before you have to let it recharge. Continuing with the squee-inducing cuteness, you’ll also find plans for new outfits. And lemme tell you, they’re absurdly adorkable. The energy you collect can be used to transport your friends from Earth to your spaceship, where you can visit with them.

If I had to nitpick over anything, it’s that the game is perhaps a little bit short. But really, there’s so much game packed into that shortness it ends up feeling bigger than it actually is. There’s very little to criticize about Space Otter Charlie; cute, charming, addicting, with solid gameplay to boot. Add in the fact that you’re an adorable otter working hard to save the rest of animal-kind, there’s a lot to love in this little gem.

Editor’s note: A Space Otter Charlie review code was provided by the publisher. 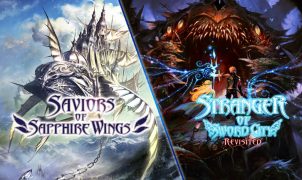 Saviors of Sapphire Wings / Stranger of Sword City Revisited Is A Real DRPG-light!     You know, it’s kind of funny that the developer behind the games that…