Time to Face Your Fears 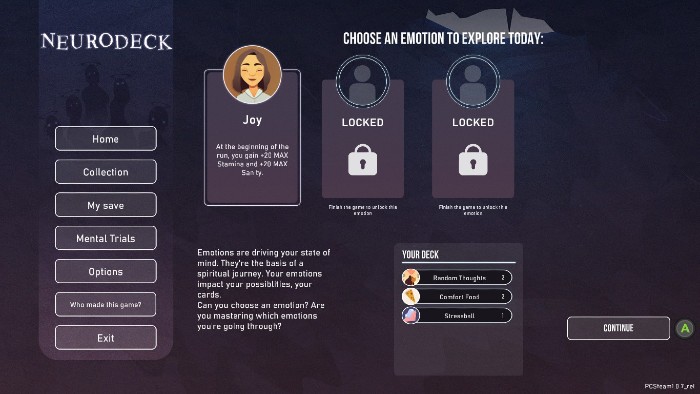 Neurodeck is a roguelite deckbuilder, in the vein of Slay the Spire or Neoverse. Much like other games in the genre, there’s not really a cohesive story. Instead, Neurodeck focuses on unique “runs,” which are attempts to finish one complete run-through of the game from start to finish. At the start of the game, you’ll choose the character you want to use for your run. You’ll begin with access to Lei, and you’re given a short description of her. Once you select your character, you’ll then be given the option of which emotion you’d like to “explore.” I found this particularly interesting, especially because it determines which bonus your character receives as well as their starting deck.

At first, you’ll only have access to one emotion, but you’ll unlock more with successful runs through Neurodeck. I don’t actually want to show any of the other ones because part of the experience of this game is unlocking and exploring the new emotions and the way it affects how you play the game. The card pool you have to choose from is also tied to your emotion, which adds an interesting layer to the game, and ensures that no two runs are the same, even when exploring the same emotion. 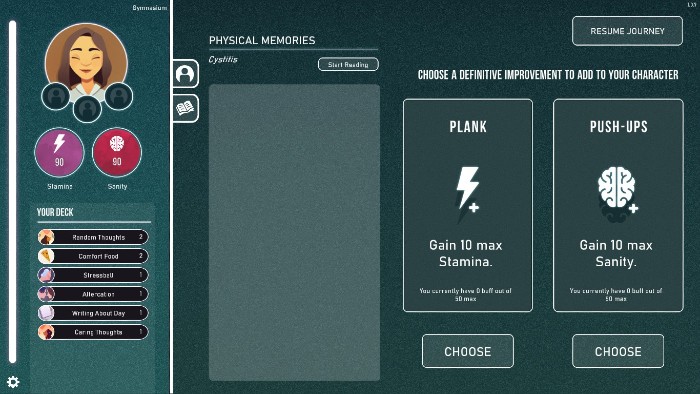 Progression through Neurodeck is linear, but you are given choices that affect your journey. There are actually quite a few different options you’ll come across. Sometimes you’ll be able to sleep, which will allow you to add a card to your deck. You can visit the library to duplicate a card. Self-reflection surveys will ask you to answer a series of situational questions and will reward you with a trait you can equip to gain new abilities (more on that later). Using the gymnasium will allow you to increase your stamina (the energy needed to play cards) or sanity (basically your HP) for the duration of that run. 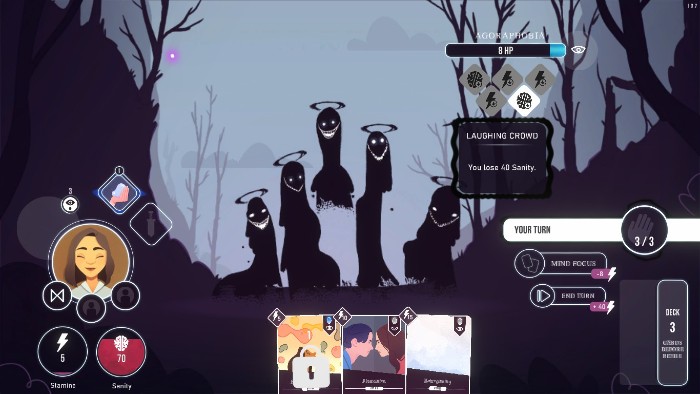 Combat is where the game really flexes its creative muscles. During a non-boss fight, you’ll be given the option of two phobias to face. Each phobia has its own attacks, requiring different strategies for tackling them. Most impressively, the attack set of each phobia is premised upon that specific fear. When fighting Agoraphobia (the fear of places or situations that can cause panic, helplessness, or embarrassment), it will use attacks such as whispering, pointing, and staring, which will inflict Anxiety (a status ailment that whittles away at your Sanity), or inflict direct damage to your Sanity. Masculinity sends its attack skyrocketing upwards every other turn with the Wrath status, meaning you have to throw everything you have at it as fast as you can to bring it down.

My personal favorite phobia to fight (which, never thought that would be something I would say) was definitely Heliophobia, which is the fear of the sun. Whenever you deal 15 damage to this particular phobia, it changes into its exact opposite: Nyctophobia, the fear of darkness or night. And when it changes, its attack pattern changes as well. And, because you’re facing down a phobia, Heliophobia has a move that will force cards of light into your draw pile, which damage you when drawn. There are just so many surprising little nuances, and each phobia is just so well-crafted. 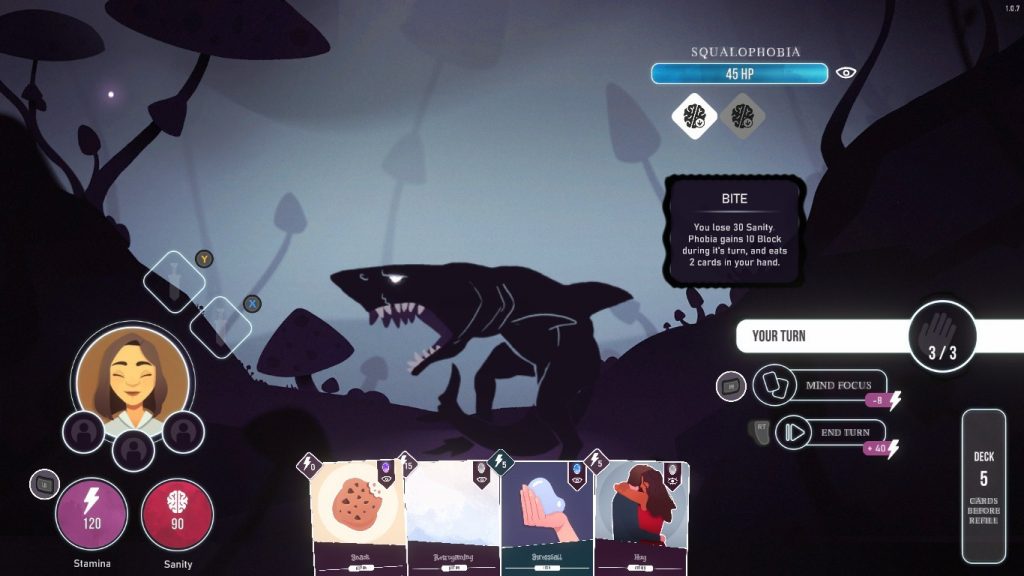 Battles are fairly well thought out. At the start of each turn, you’ll (typically) have 3 action points you can utilize. These can be used for playing cards, equipping items, or using a character’s innate skill. There’s an additional twist, though, for playing cards: your Stamina. Along with HP, you have a limited amount of Stamina, and each card has its own Stamina requirements to play. While some cards can refill some of your Stamina, more often than not, you’ll need to sacrifice extra action points to refill the gauge. You have two slots for items to be equipped. Items vary widely in what they do; some will remove status effects, some will heal Stamina or Sanity, some will cause damage, and more. 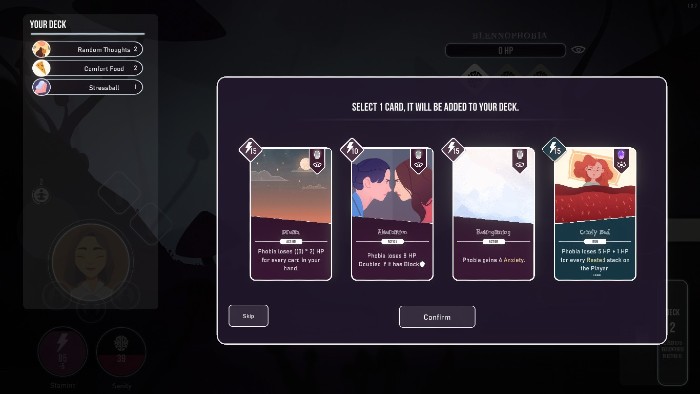 As Neurodeck is a deckbuilder, much of the game revolves around building out your deck for each run. As you progress through each “stage” of the game, you’ll have the option of adding or removing cards from your deck, transforming them, or unlocking new cards for future runs. Additionally, after defeating a phobia, you can choose from four cards to add to your deck. The pool of cards you can select from is dependent on which emotion you choose to explore for each run. There is an awesome variety of cards to choose from, and they all revolve around life and mental health. With names like Hug, Random Thoughts, Comfort Food, and even Period, they reflect all sorts of emotions and experiences. 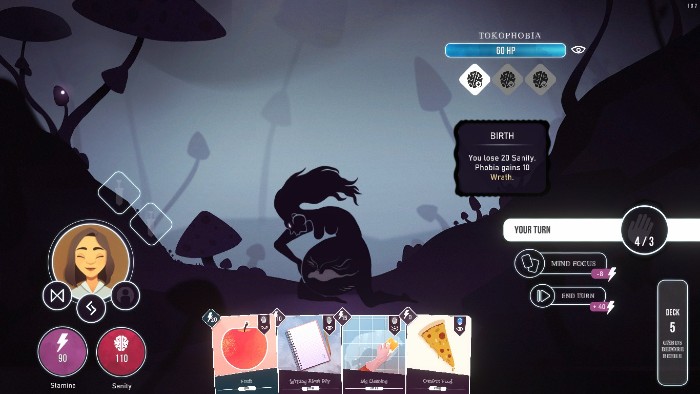 Which leads me to the game’s art style. Holy wow. The phobias are ingeniously designed to really represent their respective fear. And everything has this incredible hand-drawn quality to it that really brings the phobias and the cards to life. My only criticisms for the game’s artistic style are that the backgrounds are perhaps a bit too static, and that the music is repetitive. But honestly, it’s easy to overlook when you’re watching Agoraphobia point fingers at you, or seeing Tokophobia (the fear of pregnancy) clutch its belly in horror and agony. 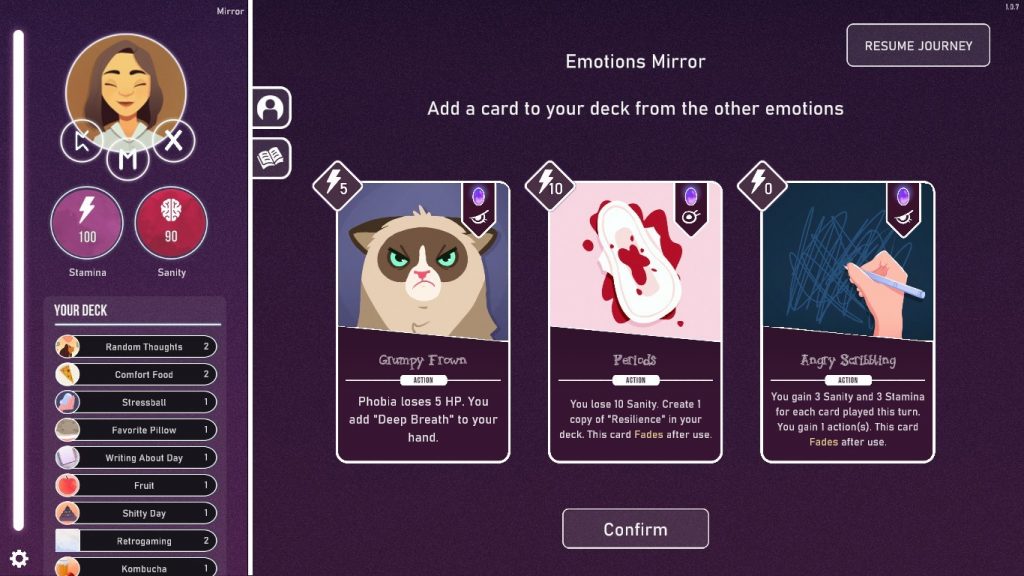 I do need to touch on something important here. Based on criticisms from reviewers and players, TavroxGames announced that they were going to spend three months improving, patching, and updating Neurodeck. Through some blind luck, they actually released Update 1.1 right as I was finishing up my review. So I circled back to see how much they changed/improved. And I have to say, I am beyond impressed. Before the updates, I was ready to bemoan that the game had the potential to receive a really high score, but it had some serious issues bogging it down.

Previously, when you equipped an item, it cost an action point, and then cost another action point to use. While not game-breaking by any means, it was certainly frustrating that the cost of actually using an item was so high. The runs were also just way too long without enough breaking them up to keep them from feeling like a slog. That’s all been fixed; items only cost one action point to equip and do not cost anything to use (which feels much better), the runs are shorter (maybe a touch too short, but better than before), and now have a miniboss in the middle. The pacing is greatly improved, and they took it a step further by balancing it out with a new feature, Meditation, which gives you stat boosts for that particular run. I’ll admit to being very excited to see what the next two months of improvements bring to the game.

Neurodeck has its flaws; there are a few balancing issues that still need to be resolved, and the pacing needs a little fine-tuning. But the good definitely outweighs the bad. There’s something strangely wonderful about facing down phobias with cards like Comfort Food and Grumpy Frown. And with the promise of more improvements to come, Neurodeck can only get better from here.

Full disclosure: This review is based on a copy of Neurodeck provided by the developer.