No, you can’t, which is why I giggle every time they use those three magical S-Words in this series. In Episode 3 of The Falcon And The Winter Soldier, there are many action-packed running sequences and spy mission espionage, as the crew travels around the world to track the Flag Smashers and their mysterious super-soldier serum down to Madripoor, where the gang reunites with an old acquaintance… or two… or three… along the way.

This episode also sets up a lot of geopolitics with the Latvian refugees, sharing piecemeal bits of information about the Flag Smashers and their leader, Karli Morgenthau. Who is coming off more as more of a human freedom fighter and refugee, though how far she takes things and what end remains uncertain.

Atop of this, we see a lot more development with whom both Sam and Bucky are to in this post-Captain America and post-Civil war universe. Both men continue to become less of a caricature of the Captain’s best bros and more like the three-dimensional people with conflicting ideologies. With Bucky doing his best to make up for his past, Sam is doing what he can to get by as a Black American. Holding true to his one value in always trying to ‘Do The Right Thing.’ Here’s the weekly recap…

It begins with the Global Repatriation Council, an organization meant to help replace people who’ve returned, though have turned into little more than terrorist raiders, who lead a group of agents similar to modern ICE units. However, this one is led by none other than Captain America. And though it’s obvious how Marvel is painting its crosshairs on the evils of extreme Nationalism — it really highlights itself here, with John Walker’s first words in this episode being: “Don’t give them a second to delete, shred, or breathe.” That last line, given authoritative similarities of the excessive police force used against George Floyd last year. As the group spits in the new Captain’s face in retaliation — John accepts that this isn’t working and seeks a new approach.

But back with Sam and Bucky, the duo decides to interrogate Baron Zemo, where James The Winter Soldier interrogates the man who’d controlled him and dissolved The Avengers, all alone. Though Hydra is possibly behind the new Super Soldiers, Bucky realizes there is something more complex afoot. And after a hasty discussion, he helps Zemo break free by slipping a prisoner a slip of paper that causes a riot. Enough of a distraction for Zemo to use the chance to escape.

When the three men meet in one of the Baron’s luxury car garages, a reluctant Sam hears him out based on the trust he places on Bucky. There, Baron discloses that a woman named Selby is the one to ask regarding how these new soldiers came to be. When the group decides to find her, Baron Zemo takes the two on his private jet, disclosing that he is was, in fact, a wealthy Baron who was rich before avengers came and destroyed his country.

Still, a master of mind games, the Baron gets under the skin of both Sam and Bucky, giving a foreboding warning about the dangers of America’s icons such as Captain America, and what happens when an overpowered man who’s worshiped comes to power such as the Red Skull, along with the wars and casualties that can result.

Zemo takes the party to Madripoor, a former 18th-century pirate sanctuary that was also, for an extended period, Wolverine’s stomping grounds. Now a hive of scum and villainy, Zemo and Winter Soldier infiltrate as themselves while Sam is disguised as a man named Conrad Mack, AKA Smiling Tiger.

Mardipoor is broken up into Hightown and Lowtown, though overall looks even better than most cities — and in many ways just like Night City right out of Cyberpunk 2077. When the trio goes inside a bar, an individual known as the Power Broker wants to see them, who is revealed to be the bad guy who runs the lawless Mardipoor city. To maintain their cover, Sam drinks a snake shot, and Winter Soldier kicks some serious butt, all so that Zemo can gain an audience with Selby.

When the two meet, Zemo asks Selby for info on the super-soldier serum in exchange for The Winter Soldier’s services (whom everyone still believes is a mindless programable cyborg). She reveals that the person they’re looking for is doctor Wilfred Nagel, though before they can learn anything more, Sam’s sister Sarah calls on his cellphone, effectively blowing Sam’s cover as Smiling Tiger. Before the men are killed, Selby is shot dead by a mysterious sniper who is revealed to be none other than Sharon Carter after they escape, who has been in hiding from the government ever since she stole Captain’s Shield and Sam’s Wings to help them back in Civil War.

Sharon takes them back to her place in Hightown, where it’s revealed she’s gotten by as an illegal art hustler. Sharon reveals that she’s stayed here because Madripoor doesn’t extradite criminals. She then admits heroing isn’t what it’s cracked up to be, calling it a joke and thinking that Sam would see things her way. Especially given how he himself gave up Captain’s shield. Bucky gets defensive and calls him out on how he’s always been into the side-kicking himself, first with Captain and then with Zemo. Sam offers Sharon a deal, where he’ll help clear her name in order to return home. She reluctantly agrees.

Oddly, Sharon hosts a party that turns into a little rave. Though I’m speculating, this scene seems like it was supposed to be longer or more intent filled but what you get is a cutaway of her finding Wilfred Nagel’s location while Zemo… dances.

Moments later, they track the doctor to a shipping doc of containers where the boys find a secret underground laboratory. But while this happens, Sharon goes on the lookout and scouts the area, kicking some serious butt along the way. Her action scenes really steal the show, showing that Sharon’s ruthless and skilled combatant maybe even on the same level as Black Widow.

Underground, Doctor Nagel is found by Sam, Bucky, and Baron Zemo. The doctor shares that after hydra fell, he was hired by the CIA and was eventually able to crack the Super Soldier Serum formula, making not muscular standouts, but rather, the perfect unnoticeable soldiers implied to be able to be sleepers agents. Before he could finish, however, he was turned to dust due to the SNAP. The Power Broker, being the only person who could help him recreate his work, which effectively produced 20 vials.

This was until Karli stole em. Soon after, Zemo kills the doctor continuing his vendetta against super-soldiered heroes, thinking that he’s saving the planet. An RPG hits the lab as a shootout ensues, where Sharon, Sam, and Bucky escape. Zemo, meanwhile, dons his signature mask and shows off his extreme fighting skills, making the audience wonder finally see him at his true potential. He confiscates a sportscar and picks up the gang, though Sharon refuses to continue to help and wishes them luck to their next location. She then finds her own pickup waiting for her and emphasizes to a mysterious woman that they have big problems waiting, implying that she knows more than they are letting on.

Violence Is The Only Thing These People Understand 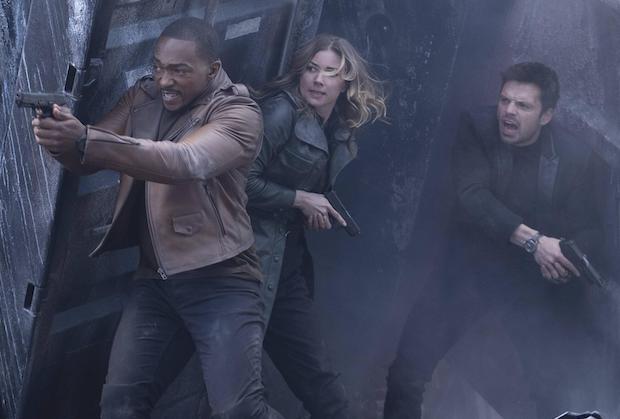 In this episode, Karli and the displaced flag smashers are heavily implied to be the test subjects of Nagel’s serum. Which she later stole and is exactly the item that Power Broker wants back. We learn in this one that Karli went to visit a woman named Donya Madani, a woman who was dying of TB. We later see Karli bomb a building to grab hoarded supplies for her people — showcasing that though her intentions to save her fellow refugees are pure, her means are not.

In the wake of both the bombing and what’s happened to both Sharon and Isaac (one of the first super soldiers), Sam questions Captain’s legacy again, wondering if the symbol behind the shield was worth all of this destruction. Bucky declares that he believes so, and that he wants to take the shield for himself from John — possibly taking on the mantle.

But in the streets of their next destination to find Karli and the Flag Smashers, James tells Zemo and Sam to continue. Bucky notices a trail of advanced beads and finds a badass-looking Ayo along its trail. One of King T’Chala’s head guards from the Black Panther movies, the warrior woman declares that she’s here for Baron Zemo — effectively here to avenge the death of King T’Chaka.

You’re Really Not Gonna Move Your Seat Up, Are You?

An entertaining reintroduction to several MCU characters from the Captain America Civil War movies, this episode is a lot of plane chartering and action sequences, with an overstuffed espionage plot and a lot of cameos along the way. It was fun to see both Sharon and Zemo fleshed out, especially regarding the Baron’s closer resemblance more to his Marvel comic’s source material. Still, most of this episode was yet another goose chase for the super-soldier serum. And though it was fun seeing old characters, some more stakes or development for Sam and Bucky would be appreciated, especially since we’re halfway done with the series.