How to Complete ‘Bunny Dango–With Eggs!’ In Monster Hunter Rise 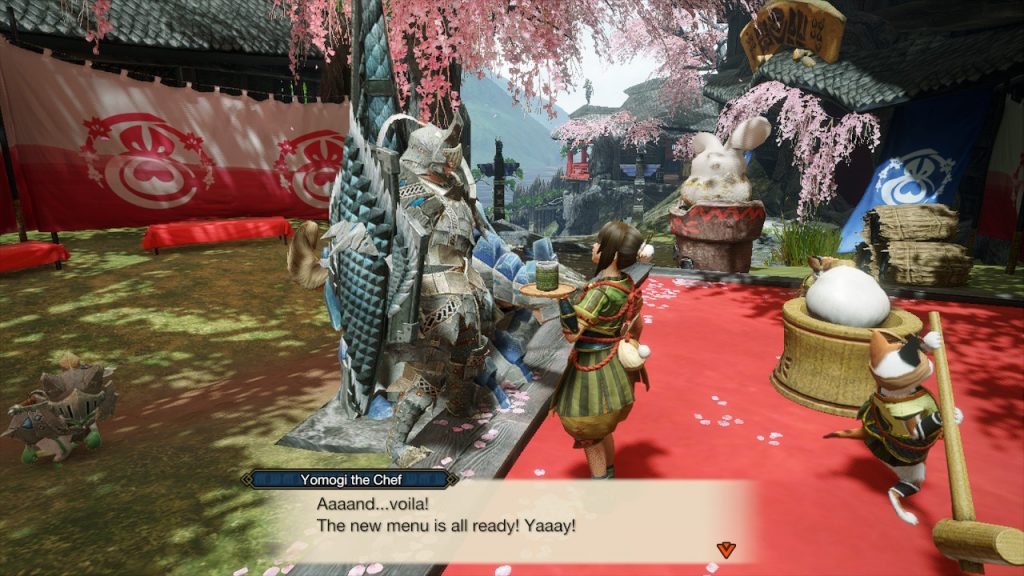 Eating has always been an important mechanic in the Monster Hunter franchise, and things aren’t any different in Monster Hunter Rise. By downing a meal (or a snack, in Rise‘s case), you’ll be able to buff your HP and Stamina for the duration of a single mission, and can even potentially activate a number of different abilities. However, while Rise presents players with plenty of tasty options in the beginning, getting the most out of eating requires the completion of various quests and requests. Most of them are easy. It seems as though the Bunny Dango–With Eggs! request has the potential to trip players up (myself included!) due to the tricky wording of its description. So, if you’ve been trying to solve Yomogi’s request and found yourself coming up short, just know that you’re not alone, and keep on reading to find out how to finally put this task to rest!

Where to Find the “Rhenoplos Egg” 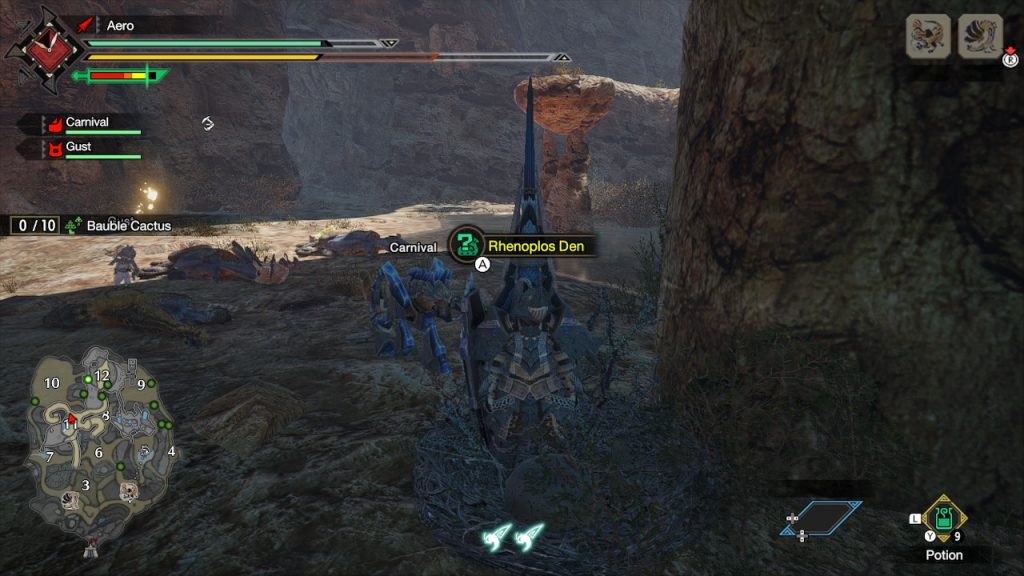 You might not be able to see any eggs, but they’re definitely there!

Bunny Dango–With Eggs! is a post-game request given to you by Yomogi the Chef. What is she after? A rather simple, ingredient, really–a single Rheneplos Egg. There’s a bit of a problem, though. For some reason, the game decided to word things incorrectly, as, technically speaking, the item “Rhenoplos Egg” does not exist. Or, at least if it does, I haven’t found it. Instead, what Yomogi is asking for is an egg from the Rheneplos Den, located in area 11 of Sandy Plains.

Once you reach the den, which is located on the lower level, you’ll just need to start digging around. It’s pretty easy to spot, as it’s usually surrounded by Rhenoplos. The egg itself is not called a Rhenoplos Egg, but, rather, an Herbivore Egg. Despite what the quest says this Herbivore Egg is what Yomogi actually wants, so you’ll need to deliver that to her.

How to Deliver the Herbivore Egg 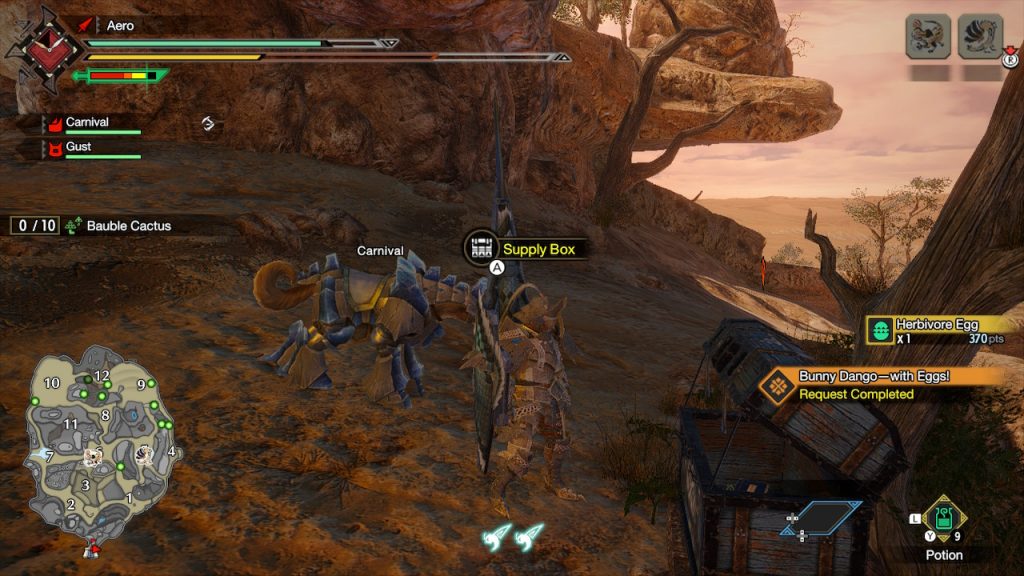 Just drop the Herbivore Egg into the box and you’ll be ready to turn in the request!

Most of the time, items that you pick up are put into your item pouch. There are, however, certain items that don’t follow this rule. Every map has its own collection of large account items, which must be physically carried back to your main camp and deposited into your item box–the Herbivore Egg is one such item. This means that, after picking up the egg, you’ll have to lug it all the way back from area 11 to the southernmost point of Sandy Plains. No quick-traveling allowed!

Carrying items is tricky for three main reasons. First, you are entirely unable to attack while carrying an item. This means that you need to stay away from monsters as best you can–especially large ones. Second, your mobility is severely impaired. You walk and run very slowly, and you can’t ride on your Canyne. Fortunately, you can wiredash to move more quickly. Finally, you need to remember that large account items are fragile–they will break if you fall from too great a height, put them down, or are attacked. If you’re itching to things over with quickly, you can also try wiredashing downward at the end of a large jump in order to avoid breaking an account item. Just be careful of your timing if you decide to do that, though! I can personally attest to how painful it is if you mess that up.

Time to Dig In! 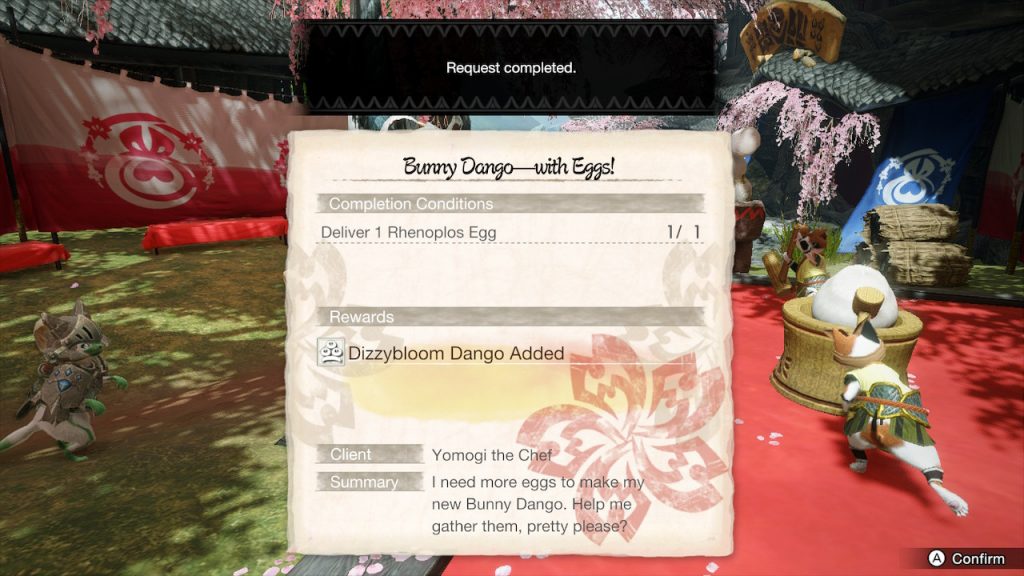 I wonder how she managed to crack an egg that big?

I have no idea how a single egg–regardless of size–could allow someone to produce infinite amounts of dango. But, hey, I probably shouldn’t really think about that–and neither should you! The only thing that matters is that you now know how to complete Bunny Dango–With Eggs! in Monster Hunter Rise! have access to the ever-so-helpful Dizzybloom Dango, so don’t hesitate to chow down whenever you need it! What did you think of this game’s request? Was the Dizzybloom Dango a worthwhile reward? Let us know in the comments below!