Make your Shrine Ruins hunts more convenient than ever! 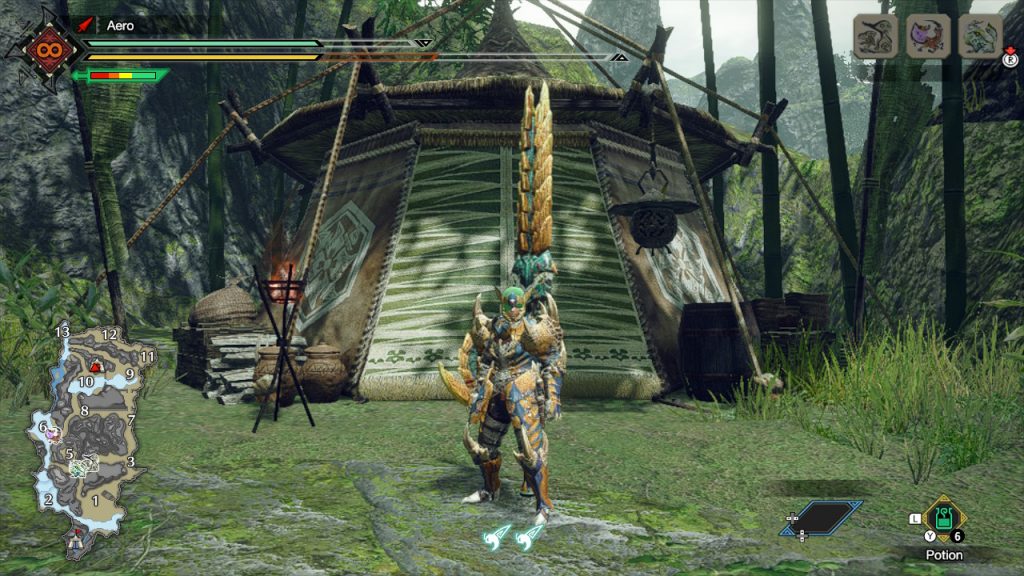 Fortunately, although locating some of these can be tricky, we here at Hey Poor Player will be going through each of Rise‘s unique locales in order to give you a helping hand regarding where to find each of the game’s sub-camps, and how you can go about unlocking them once discovered. And, of course, what better place to start than with Rise‘s own first location—the Ancient Ruins! 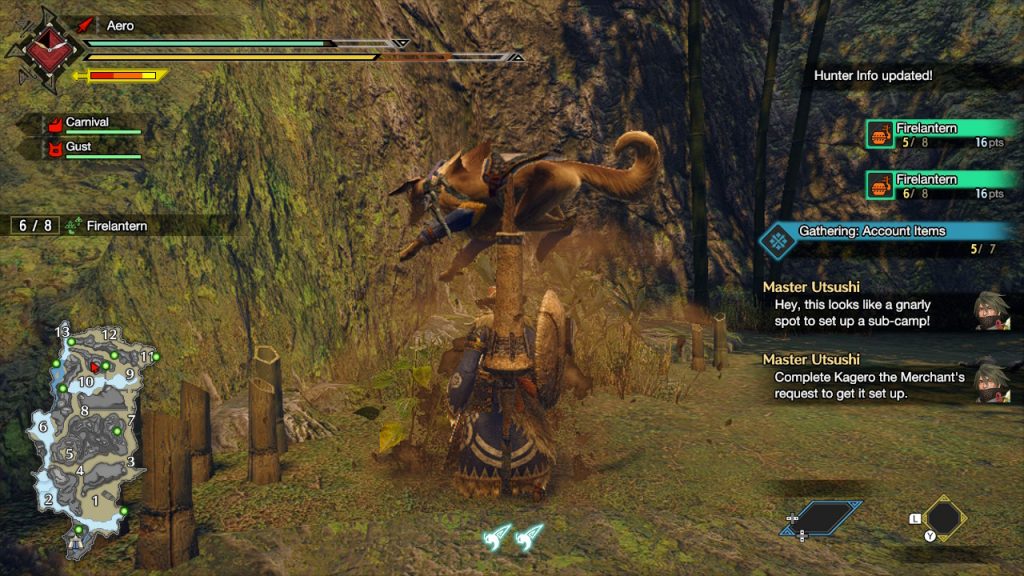 The Ancient Ruins sub-camp is a little easier to come across naturally than other sub-camps, but it’s still miss-able!

The Ancient Ruins is unique in that, in contrast with Rise‘s other four areas, it only has one sub-camp, the location of which can be found at the top of a mountain in the northern part of area 10. If you’re new to the game, finding a location on the top of a mountain might sound intimidating, but don’t let it scare you! There are actually several ways of getting up here. If you’re still getting used to Rise‘s new mechanics and would prefer to take the slow and steady way, there are some climbable vines next to a Sleep Herb gathering spot that can be found in the narrow path between areas 10 and 12. Starting out this way will put you north of the camp, but you’ll eventually wind back around to it! This area can also easily accessed from most starting points via properly timed upward wiredashes and wallclimbing. So, regardless of what you’re comfortable with, you’re in good hands! 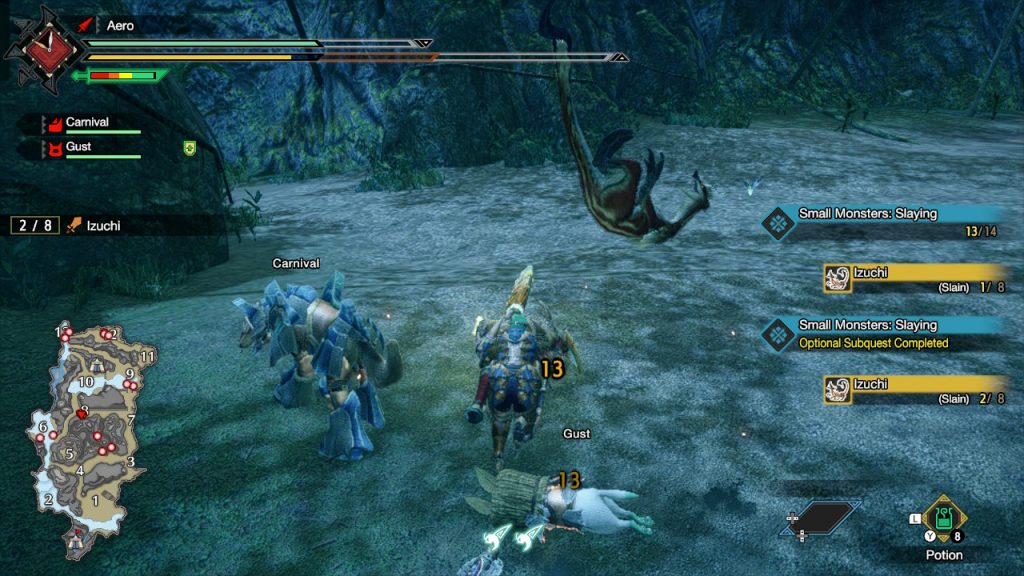 Sorry, guys, but you gotta go!

Congrats on finding what’s most likely your first sub-camp! Now what? Well, first you need to go back to Kamura Village and talk to Kagero the Merchant, who will issue the request Shrine Ruins Sub-Camp Security. If you’re coming back around to this after having already played Rise a bit then you’re most likely already familiar with requests. If you’re not, however, then I’ll give you a brief rundown. Requests are side-objectives, given to you by Kamura villagers, that can be done in tandem with regular hunts. Unlike quests, requests can be completed at your leisure, and can even be completed across multiple quests! Most of them are pretty easy, though, so, assuming that you’re wanting to get things done quickly, we’ll take a look at the fastest way to complete Shrine Ruins Sub-Camp Security.

The Shrine Ruins Sub-Camp Security request, like all sub-camp security requests, tasks you with slaying eight of a specific small monster—in this case, you’ll need to slay eight Izuchi. While Izuchi can be found roaming around in every Shrine Ruins quest the fastest way to complete this request is to actually take on the 1-star single-player quest, Help With Maintenance, as it literally wants you to slay eight Izuchi—talk about killing two bird wyverns with one stone! After that, all you’ll need to do is talk to Kagero the Merchant again and presto—Sub-Camp 1 is now yours to use forever! 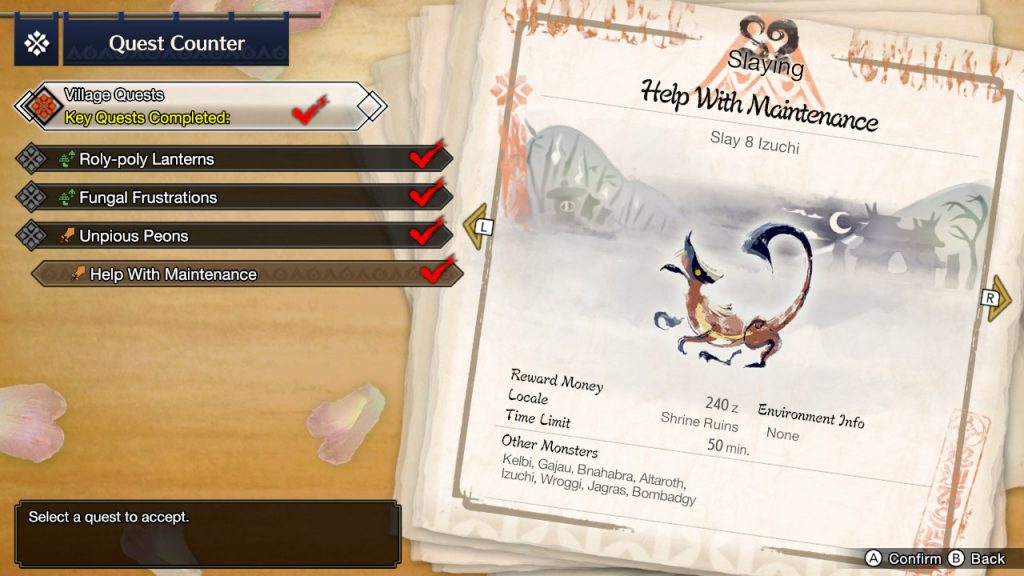 It’s almost like this quest is telling you it’s for the sub-camp.

That about wraps things up for our guide regarding how to unlock the Shrine Ruins sub-camp in Monster Hunter Rise! Did you have any trouble finding or unlocking it? What do you think about the addition of sub-camps in Rise? Let us know in the comments below!