Move Over, Mjolnir. Learn How To Crack Skulls And Take Names With Our Monster Hunter Rise Hammer Guide 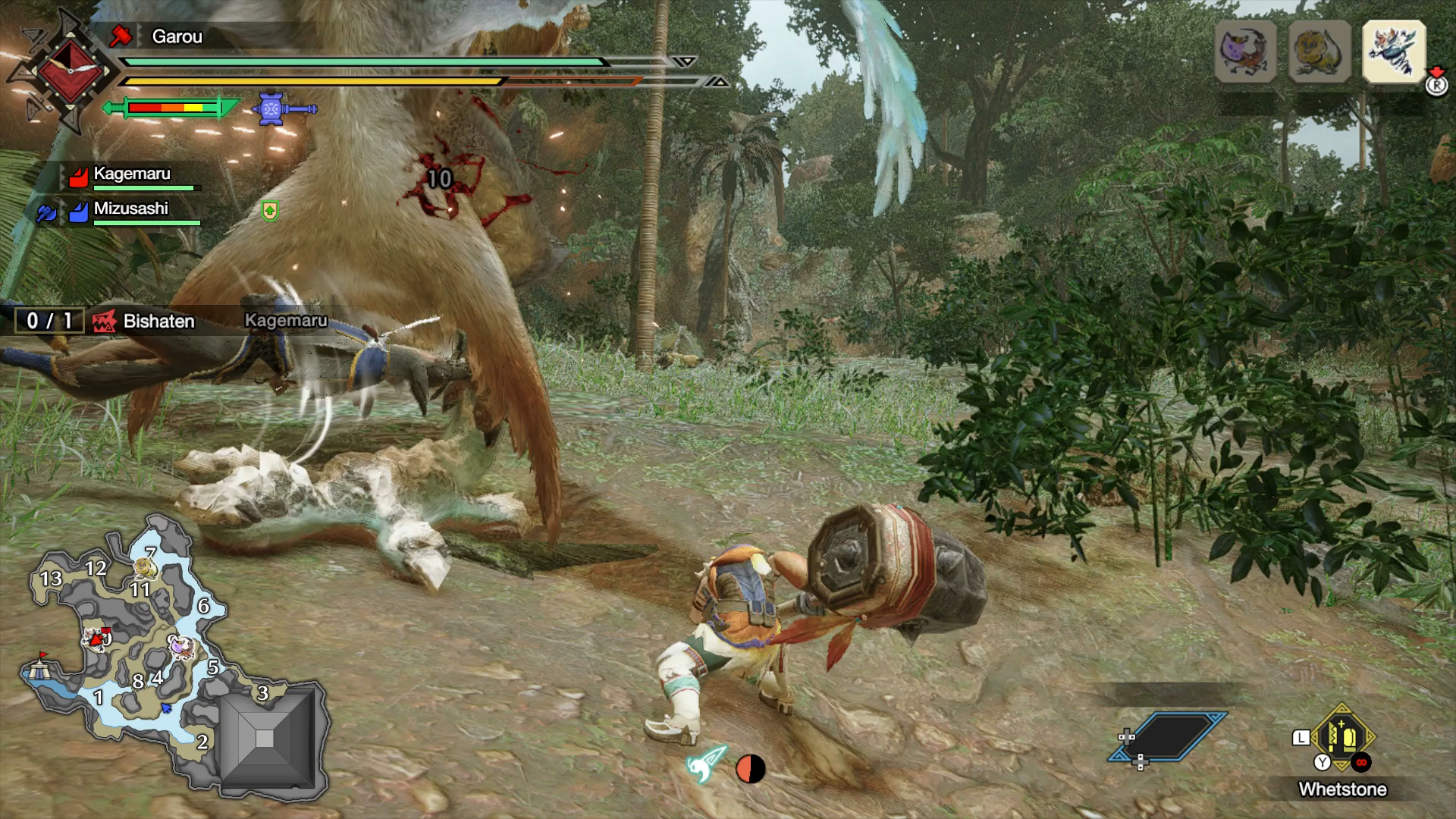 The Monster Hunter games have always had a plethora of awesome-looking weapons for players to choose from, each with its unique way to bring the hurt to the insane amount of creatures littered throughout the franchise. With so many options to choose from, deciding on what weapon to main can be a pretty tough conundrum, to say the least. Understanding what moves to use, what combos to do, let alone how to use your weapon and what armor sets and skills to use can be a daunting and overwhelming task. Well, that’s exactly why we’ve decided to take a bit of time and go over all the weapons featured in Monster Hunter Rise and give newer players a better insight on how they work and how they are played to help you decide on what weapon or weapons you should roll with to make hunts even easier! 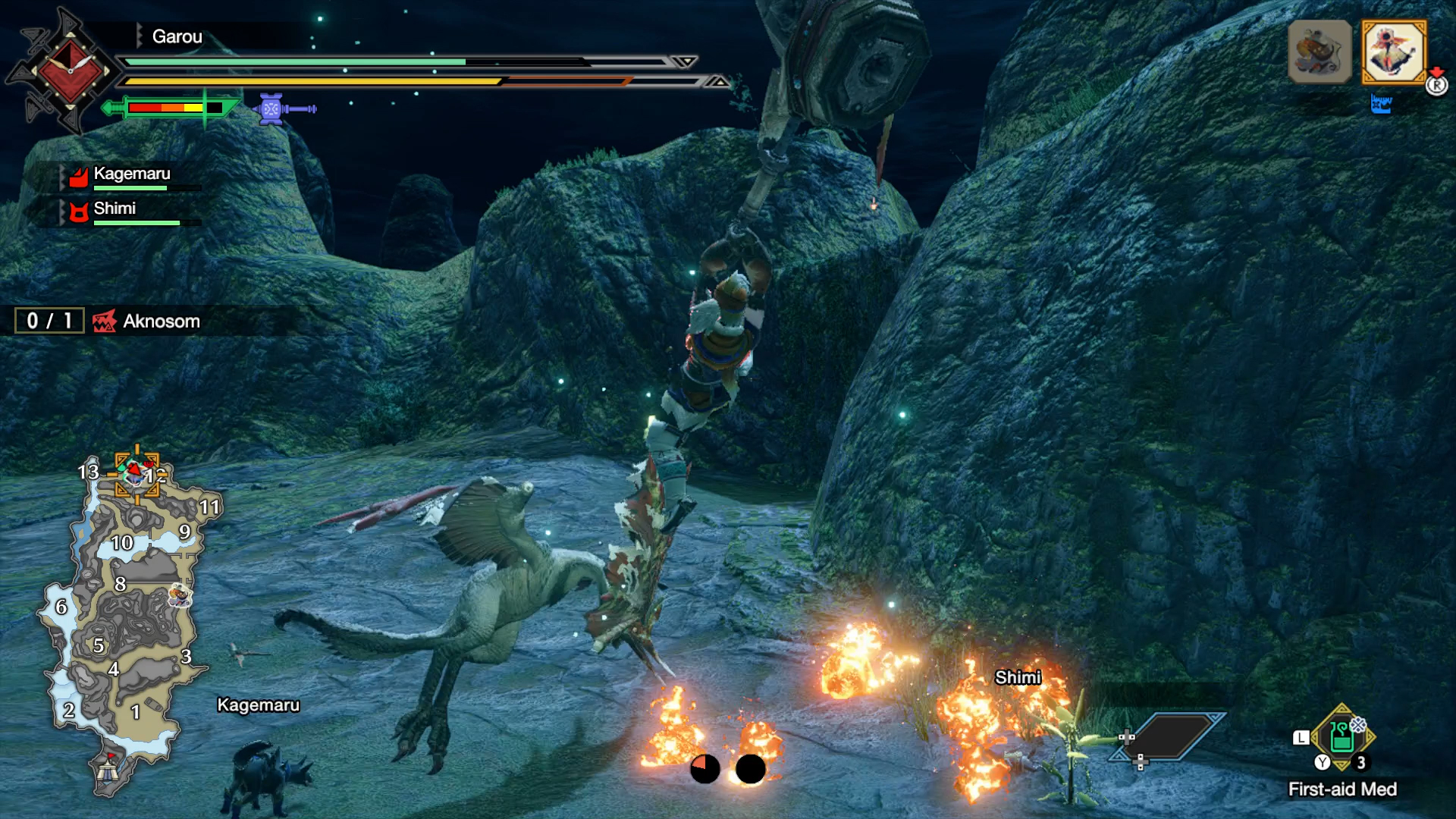 A potent weapon with excellent mobility and single hard-hitting strikes, the hammer specializes in headshots and still the king of cracking skulls and getting knockdowns on monsters for insane head damage. It’s a great weapon for anyone who likes to stay in the monster’s face and dish out loads of hurt. Along with its powerful attacks and stun potential, the hammer can also charge its attack up to 3 levels, changing color when you hold down the ZR button while still maintaining your mobility. Monster Hunter Rise also introduces a new mechanic to the hammer, which allows you to switch over to Strength mode by pressing the A button while charging up, giving you access to newer slam attacks. So to start off and help ease newbie hunters in, let’s go over some of the basics and cover the hammers attacks, abilities, and combos that’ll help you channel your inner Thor as you wail away on your next skin suit.

Overhead Smash into Upswing Combo: X, X, X- This is your basic mash X combo. Pressing X once gets you the standard overhead smash attack, and pressing X a second time will give you another overhead smash. The third press will giant baseball bat swing that can stun monsters.

Side Smash into Upswing Combo: A, X, X Another one of your standard combos and the main one you’ll use to stun monsters when in close. Instead of ending with your Big Bang combo, you’ll instead end with an upswing for a quick and easy stun combo.

Charged Side Blow: Press or slightly Hold ZR Button-  The first of your charge attacks. After tapping or holding the ZR button, your hammer will flash red, letting you know it’s reached the first level of charge.  Charged Side Blow can also be followed up with either the X or A combo routes. When the hammer is in its Strength variant, you’ll do a Charged Side Blow, followed by the Power Swing attack by pressing the X button.

Charged Upswing: Hold the ZR Button– This is the second level of your charge attacks will glow with an orangish hue signifying it’s ready to go. A lunging uppercut that is great from quick and powerful stuns; can also be followed up by the X and A combos. The strength variation to this attack, the Brutal Upswing, will glow blue and has crazy stun potential.

Dash Breaker: ZL + X- This move is going to be your best friend once you unlock it. You’ll receive this once you finish the three-star Urgent Quest Feathered Frenzy. Just like your Silkbind Spinning Bludgeon, Dash Breaker can be charged before being released and also comes with the added benefit of a built-in invincibility frame, making it a beneficial move when trying to get in on monsters.

Impact Crater: ZL + A- Impact Crater is a powerful Silkbind attack that’ll launch your hunter into the air, landing two attacks on the way up before sending you crashing down with a third and final heavy attack. Unlike the other two silkbind attacks, Impact Crater can’t be charged during the attack and instead will use whatever level charge you currently may have during its use, so pay attention to your charge before you use this attack. It’s a pretty cool-looking attack but is best used during stuns and knockdowns. 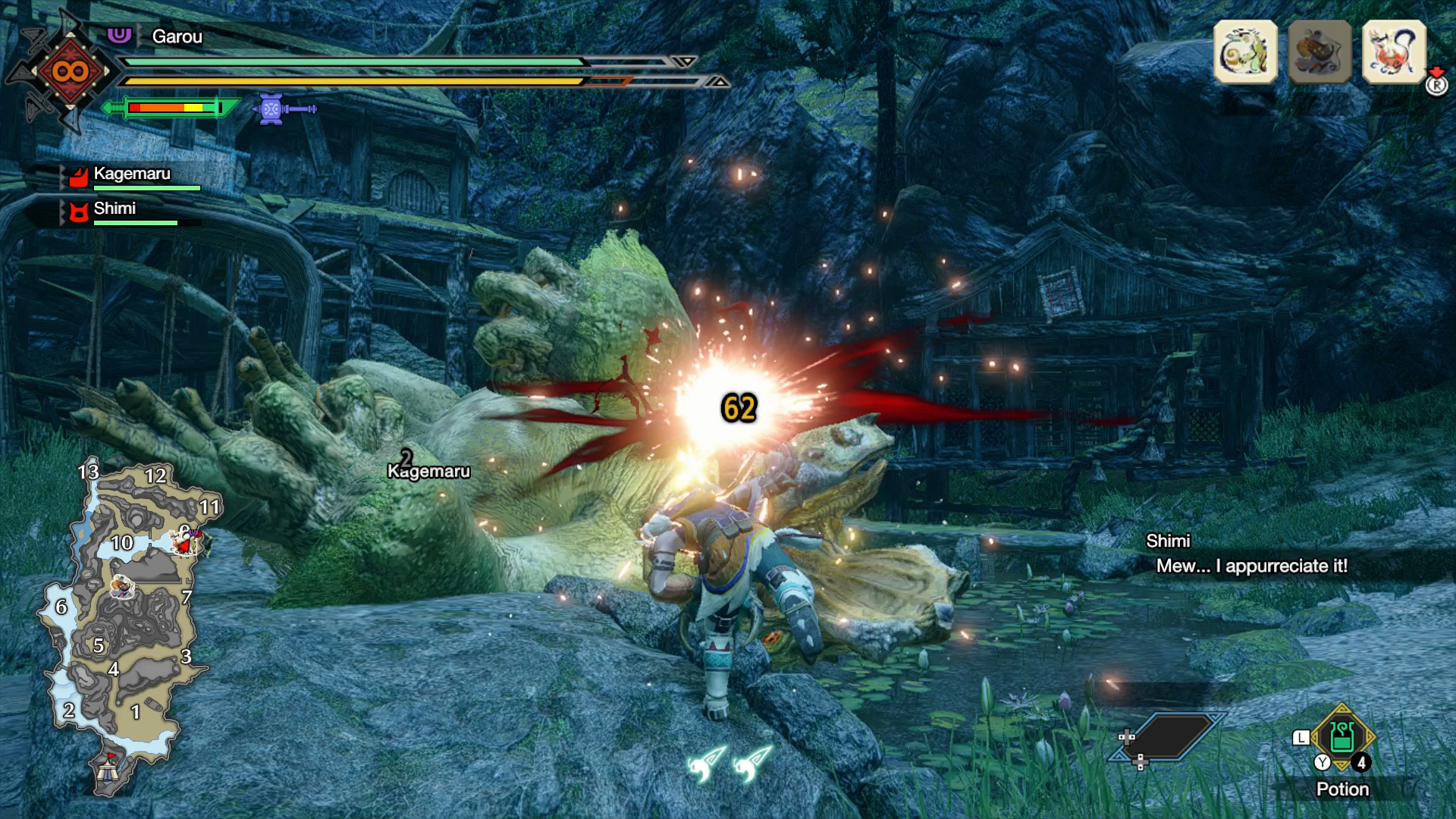 The hammer’s straightforward, simplistic play style makes it a pretty solid beginner’s weapon in Monster Hunter Rise. You want to utilize the hammer’s mobility and charge attacks to avoid hits, counter, and go for the monster’s head as this weapon does tons of stun damage in single strikes and can easily get knockdowns. Use your roll to save your hammer charges and cancel out some of your recovery frames after certain attacks. This can save your butt whenever you may get caught off guard during a charge.

Charging up while getting yourself in position for your next attack is key since some of the stronger charge moves can take a bit to start up, and it helps fill in some of the time while you prepare your next move.  Spinning Bludgeon, Charged Upswing and Brutal Charged Upswing are great tools for starting strong combos while you move into position to give the monster a good hit to the skull, not only can they quickly close small gaps between you and the monster, but they can also lead into your main two stun combos X, X, X and A, X, X. Once you’ve unlocked Dash Breaker equip it IMMEDIATELY and abuse the crap out of it, there’s nothing better than getting an invincible attack that may lead to an easy knockdown. Once you’ve got the monster down, make the most of your damage by using your Big Bang combo or any of your high damage charge combos and end them with Impact Crater if you’ve got the time. In terms of skills, Slugger and Evade Extender can be really useful; evade extender will increase the dash distance. This will make repositioning to punish the monster’s openings with a fully charged Impact Crater extremely fast and effective. 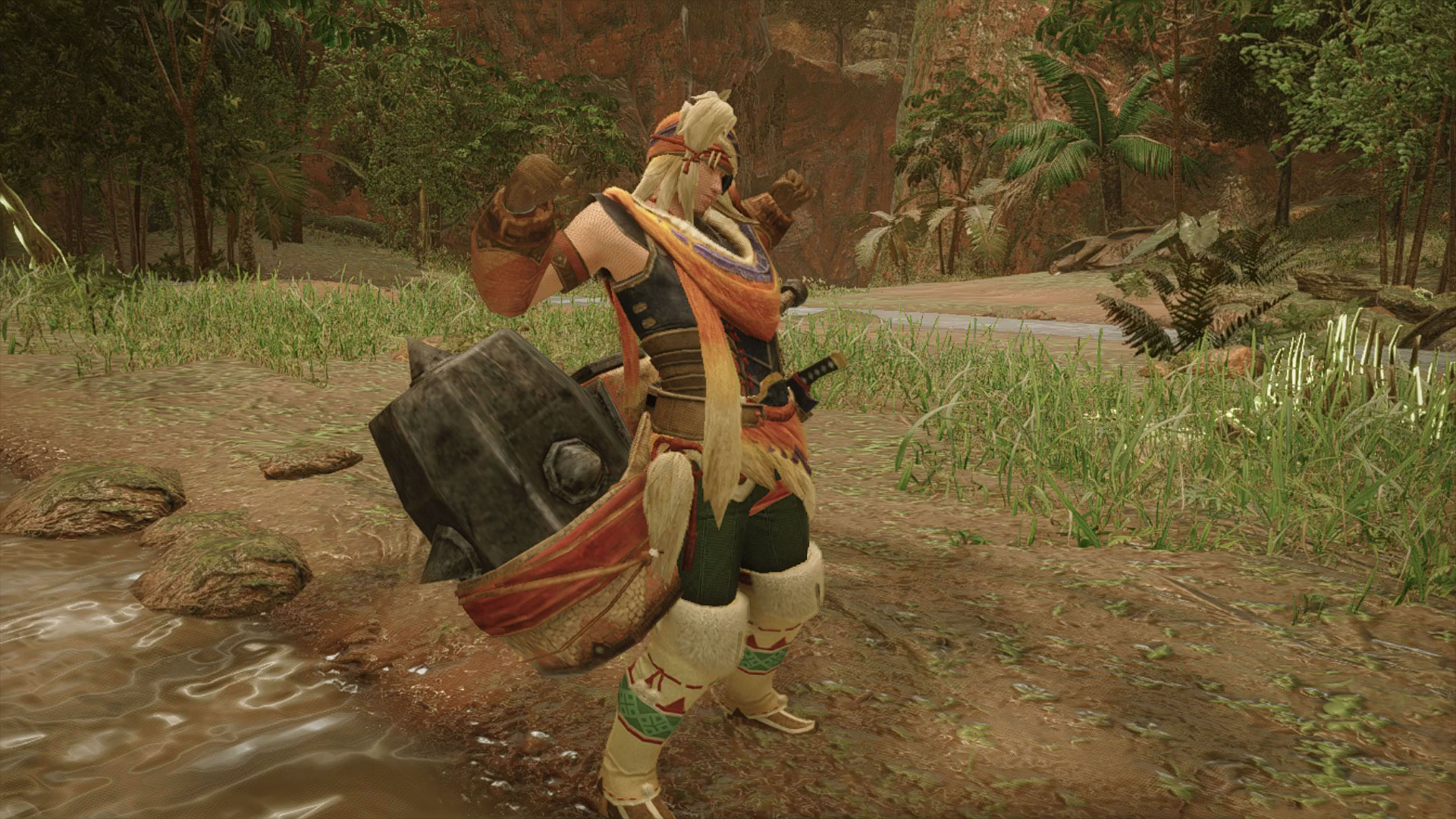 Well, that about sums up the hammer, and hopefully, this Monster Hunter Rise hammer guide will help newer hunters understand the ins and outs of using choosing this bad as your main weapon, and remember hunters don’t be like Thor always go for the head and you’ll do just fine. So, what other weapons will you guys be using? Lets us know down in the comments section below.

For more on the game, check out our Monster Hunter Rise review.