Shoot for the (Pixelated) Stars

I have to admit that Lunark flew under my radar. I’m not much of a PC/Steam gamer, and the only reason I even checked it out was because the illustrious Josh Speer of HPP asked me to do so. This turned out to be quite the boon for me. Lunark’s demo is short (I beat it in probably twenty minutes or so), but this brief glimpse into its world and gameplay already shows promise.

The demo doesn’t showcase much of Lunark’s plot, but I managed to pick up a few details. An AI named Noah has taken up residence on the moon, which has been eponymously renamed. Noah’s job is to preserve humanity. I’m not sure how it does that, but if I had to guess, there’s probably something sinister to it. Meanwhile, back on Earth, a rebellion is forming against Noah, but it’s unclear why anyone would want to rebel against the AI built to protect them. And our protagonist, Leo, has a few mysteries of his own. It certainly has a cyberpunk/sci-fi feel to it. 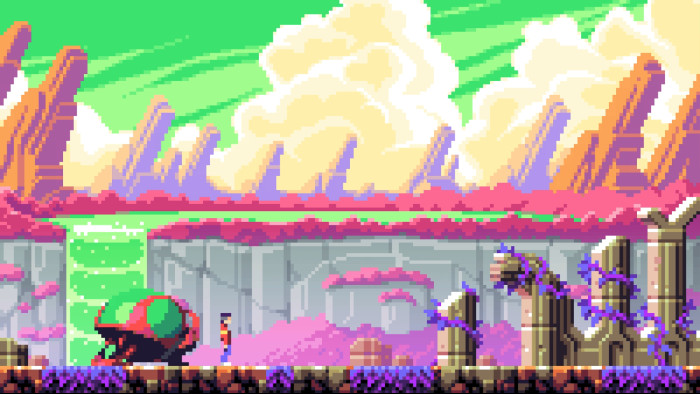 At the start of the demo, Leo lands at some kind of robot production factory. After chatting up the guards and employees, all of whom are concerned about the rebellion, he meets up with Gideon, who wants to have a serious talk. Before that, though, Leo takes a quick detour to control a robot. This section acts as a brief primer for the game’s controls. The robot, and eventually Leo, can run, jump, hang, roll, and climb up and down. It can also fire a rechargeable gun.

After mastering robots, Leo follows Gideon to his office for that serious chat. As Gideon’s protégé, Leo is in no position to refuse Gideon’s requests, no matter how ominous they seem. Gideon starts by reminding Leo that he’s always helped him, even though he’s different. As such, it’s apparently time for Leo to pay him back. Gideon asks him to retrieve an ancient artifact by using his abilities. It’s unclear what he means by that and even Leo seems unsure. Gideon then gives him a gun and sends him on his way.

At the ruins, Leo finds an engraving that reacts to his presence. A door in the floor opens, and it’s at this point that the game begins. 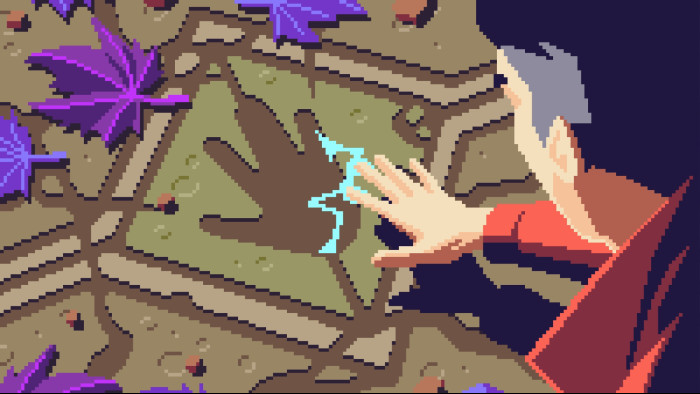 Lunark is a cinematic platformer in the same vein as Flashback, Another World, and the original Prince of Persia. I recognized its lineage as soon as I started moving. The animation and physics look and feel realistic. It took me a little while to adjust to the realism. Leo can’t stop on a dime when running. The animation has to finish before he can perform another action. So, if you’re sprinting and bats come flying at your face, you might not be able to duck in time. Suffice it to say that I ran into plenty of bats. Fortunately, Leo also has a shield with limited uses. It doesn’t stay on for long, so watch your timing. Aside from that one issue, which is all on me, the controls feel natural and crisp.

The demo includes some of the first dungeon and ends with a boss fight. You’ll jump across gaps, climb up and down platforms, and roll through narrow passages. You’ll also need to find crystals to activate switches, which then move large platforms back and forth. The first dungeon is a little maze that requires activating all the switches and putting all the platforms in their proper positions so that you can create new pathways through the ruins.

Aside from the bats, there’s also gross spider-like creatures skittering around. They only take a few hits to kill, and they pop in a juicy explosion upon their deaths. Leo can’t aim upward, so you’ll have to wait for them to be on his level. They enjoy climbing on ceilings and then failing on unsuspecting prey. The aforementioned boss fight is grand and equally gross. I won’t spoil it, but it requires brains and brawn, which I always appreciate. 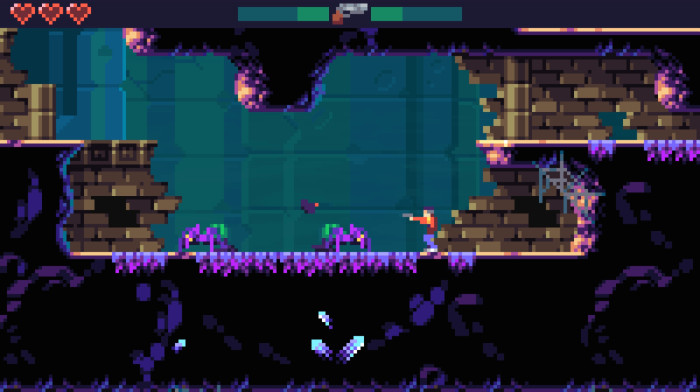 I’m not sure if this first level’s design aesthetic is representative of the entire game, but it has a Metroid-esque feel to it. The ruins are dark, dank, and lonely. There’s a giant statue in the background near the entrance. The enemy designs also feel like something that could have come from Metroid. I like the pixelated feel of the world, and there are a lot of little details in the environments that help bring the world to life. The lights glow dimly, gems shimmer brightly, and a strange liquid drips into the depths below. A slow techno beat mixed with violin and what sounds like xylophone adds another layer to the already mysterious circumstances in which our hero finds himself.

I wish I could spend a little more time with Lunark. From my time with the demo, it seems to have all the ingredients needed in a solid cinematic platformer, and its setting and narrative should be enough to help set it apart from its forebearers. Fans of Flashback in particular will feel right at home, but the game is accessible enough for even casual gamers. Leo’s journey begins just as the demo ends, so here’s hoping I don’t have to wait too long to see what happens next. 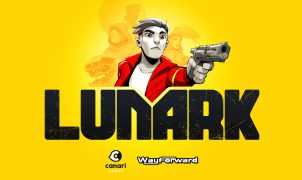 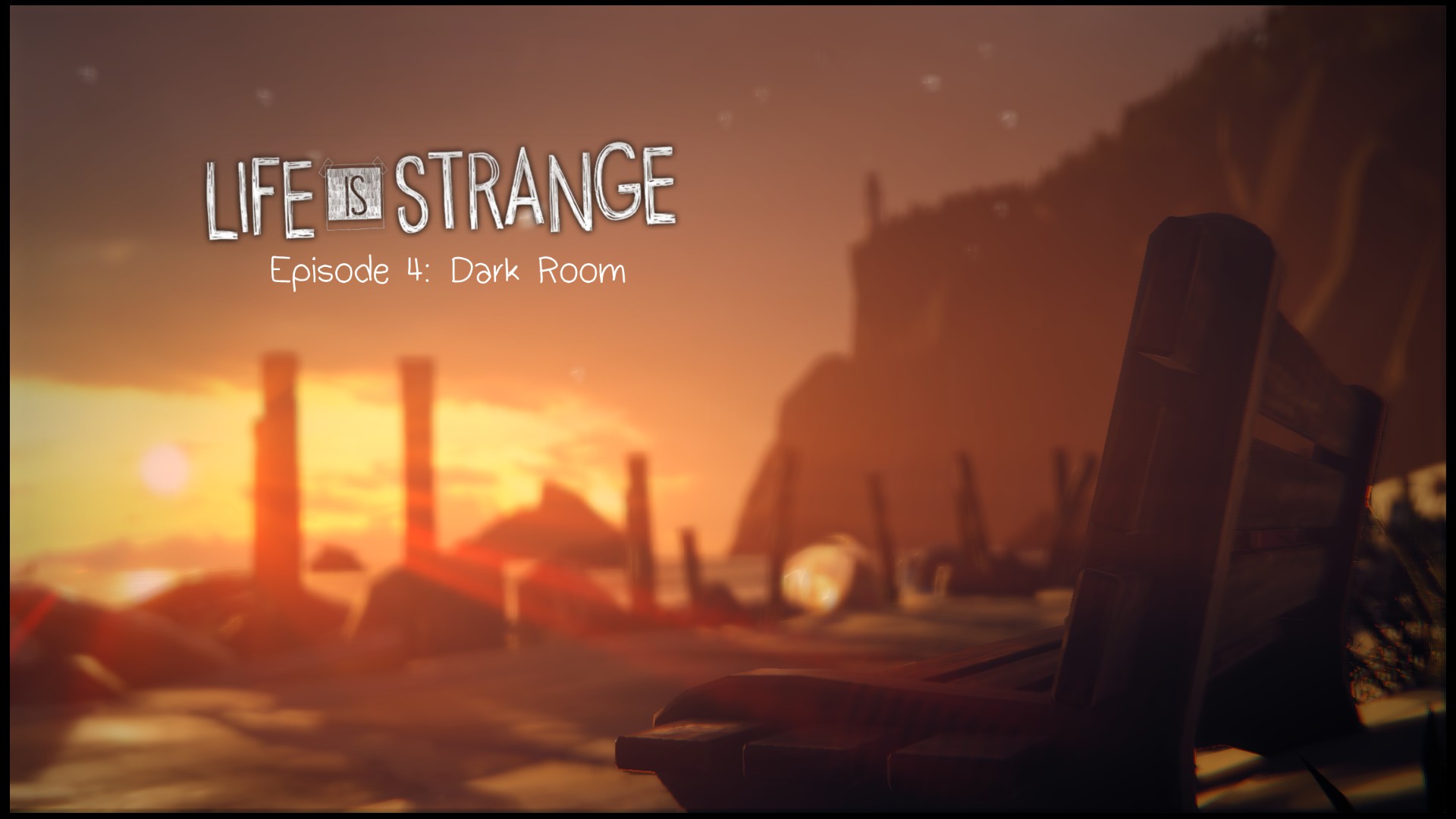