I’ll Get You Next Time… Next Time! 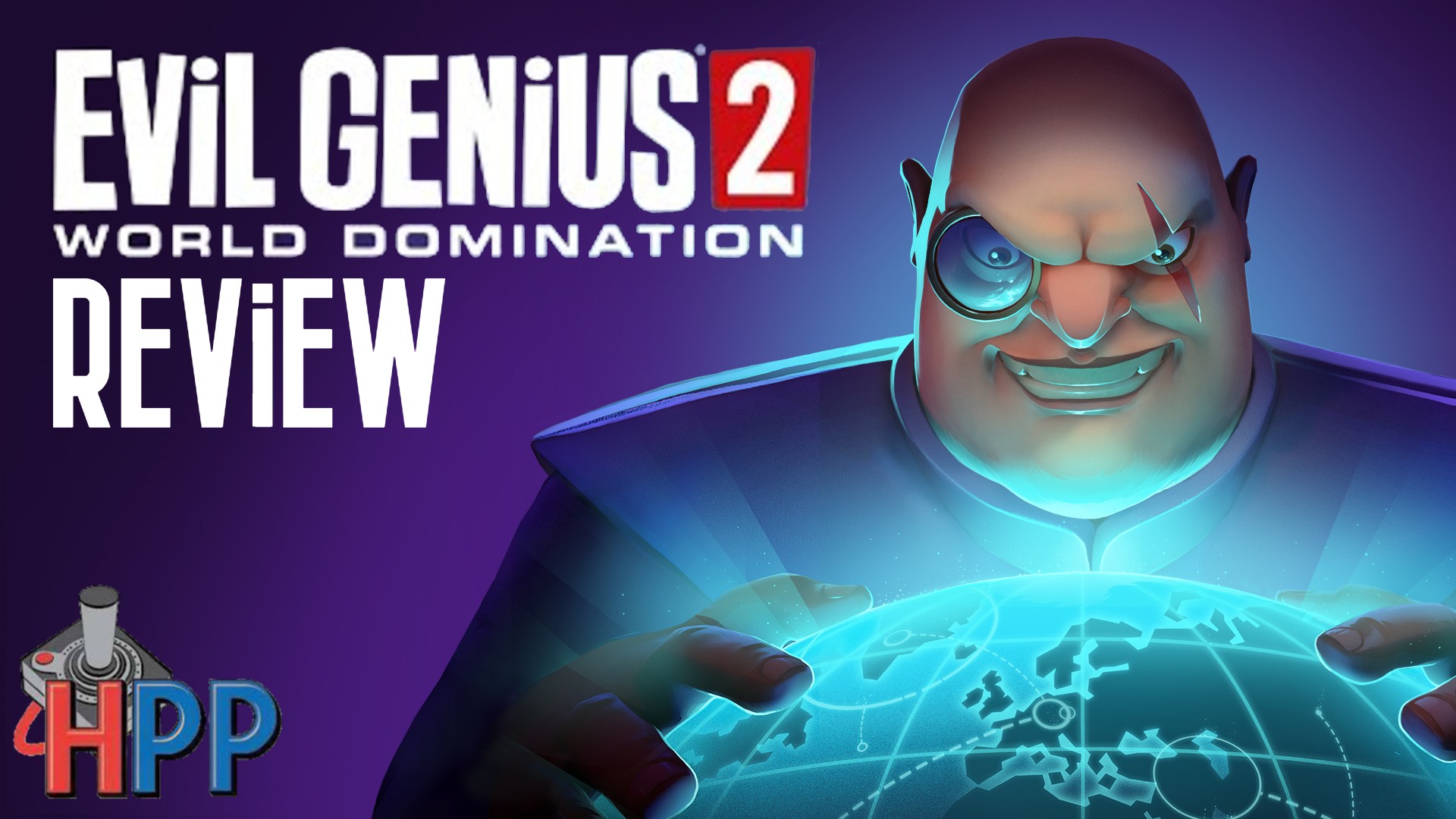 Ever since childhood, I’ve often wondered what it felt like not to be the hero of the story but to be a wicked, mustache-twirling villain. I’ve wondered what it must be like, deviously pulling strings from behind the scenes and dominating the world through trickery and corruption. This is, of course, why I became a games journalist. Wait, did I just say that out loud? Curses, Gamergate will know all about my plans!

Thankfully, there seems to be series catering for those with my diabolical bent. Evil Genius 2 casts the player as a scheming uber villain straight out of a classic James Bond movie. It tasks you with building and maintaining a lair from which to plot and execute your plans of world domination.

The build system takes a little time to get used to but is pleasingly convenient when you get the hang of it. First you’ll need to portion up an area of your underground lair to be dug up for a specific room type. Then you’ll need to place the room’s furniture inside. What’s handy is that you can’t confirm any build orders if your commands will block off a part of the room or create a room that’s otherwise non-functional. Once you get the hang of it, it becomes a joy. 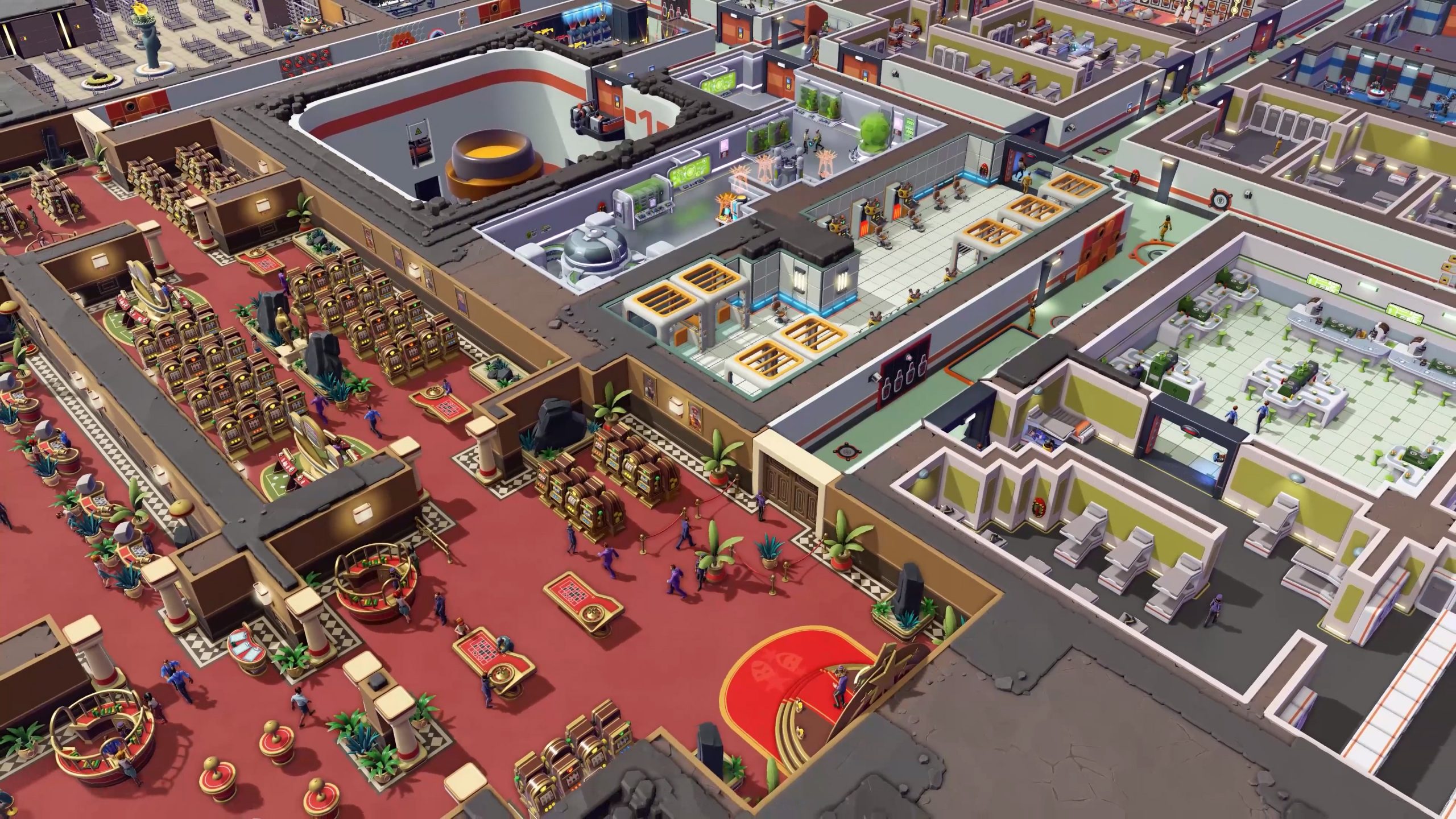 The music is swaggeringly brassy, perfectly in line with the groovy themes of Connery-era Bond movies. The aesthetic is also relentlessly 1960’s from the Kubrick-esque retro-futurist curved TV screens to the uncomfortably rounded chairs. It’s great fun setting it all up. To store all your gold and power your many electronic devices, it requires a bit of canny planning to maximize your space. You have to make sure no earnings are wasted because there’s not enough pallets for your gold and you won’t end up with a blackout because you don’t have enough generators.

Building rooms and balancing their power, budget and vault capacity is by far the most fun part of Evil Genius 2.

Once rooms have been laid out and constructed, they must be operated and maintained by your minions. Your basic yellow-jumpsuited grunts will wander around, constructing things, operating radio consoles or fist fighting with intruders. More specialist tasks will require more training. With a bit of practice boxing a dummy, your weedy workers will turn into buff guards who can monitor security cameras and engage hostiles with special weapons. Scientists will slave away scribbling on whiteboards to research new technologies.

Sadly, you won’t just be allowed to pillage and plunder in peace. Periodically investigators will arrive at your island to look into what you’re up to. There are two primary ways to get rid of these nosy gumshoes. The most obvious way to best them is in combat. Tagging them for elimination will have your henchmen batter them to death, whereas tagging them for capture will have them squirreled away in a holding cell for interrogation. Once their feet have been relentlessly tickled, they’ll give up valuable intel, which can be used as a resource for schemes. 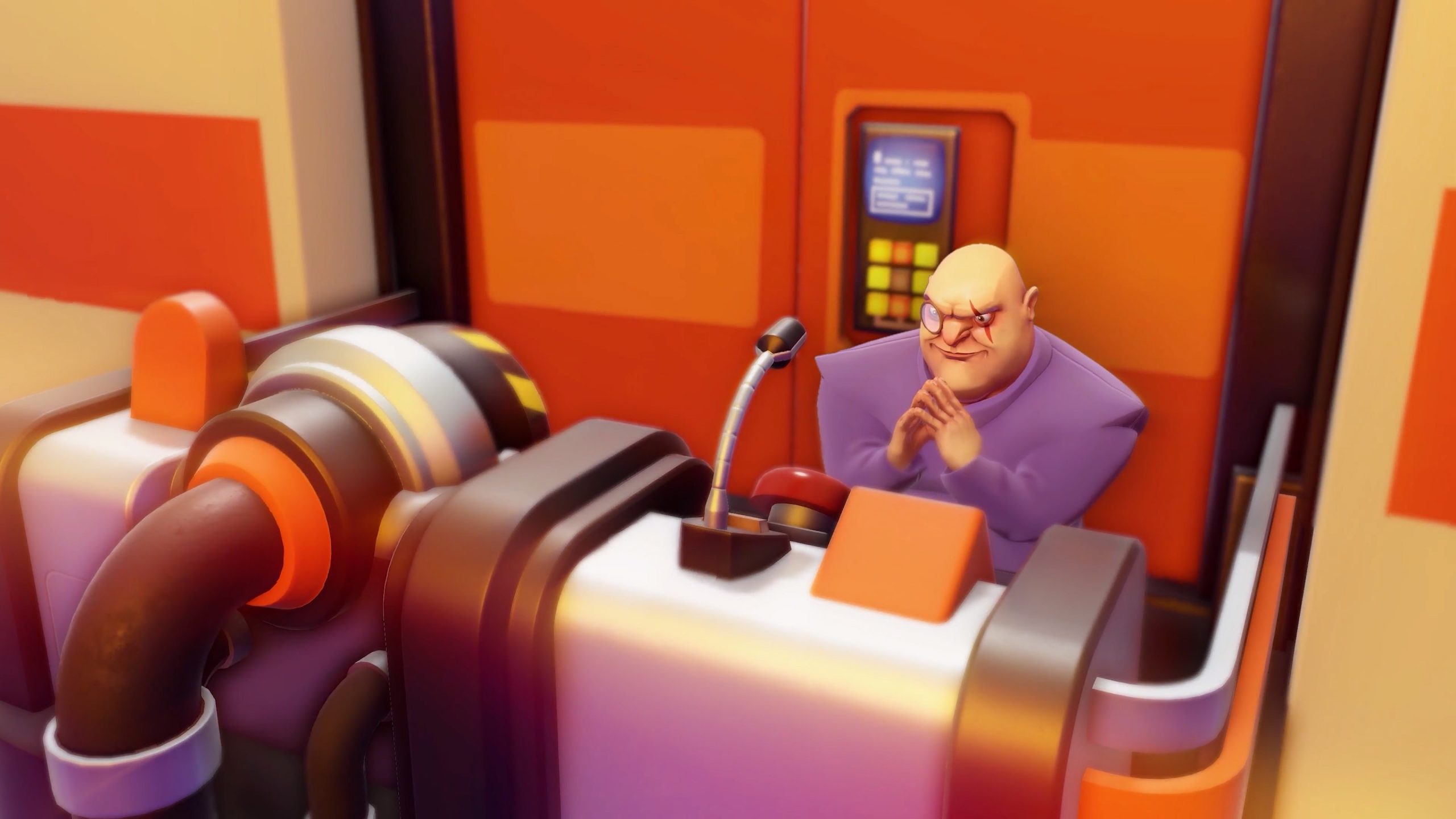 This brings us to another type of worker: the purple-suited valets. These workers will focus on running the island’s “front” operation: the casino. The casino is not only handy for fleecing tourists for some extra cash, but also to distract unwelcome agents with booze, gambling and karaoke, hopefully causing them to leave none the wiser about what’s going on deeper in your lair.

Sadly, dealing with intruders can become a rather samey part of Evil Genius 2. It’s very easy to miss the arrival of incoming agents because they arrive so frequently and you’re distracted by all the other elements of your empire to run. I often didn’t notice their arrival until they’d already gotten into my base and I’d lost the opportunity to micromanage their distraction. Battles often turn into these rather incoherent mass brawls where all your nearby workers and guards will bundle onto intruding agents, exchanging blows and bullets with no input on your part.

At least you can directly control your henchmen, and your wicked supervillain him/herself!

Similar to the Tropico games with El Presidente, your genius is a playable character in their own right who can move around the lair, participate in combat and “encourage” the minions to work harder. I started off with the grey-suited Blofeld-esque Maximillian Mastermind. With a vicious bark he can make nearby workers finish their training instantly or simply work harder. Since the mastermind’s stats are so good, it can be handy to send them into combat, but if they are defeated then it’s game over, making this a risky venture.

Your henchmen add a bit of spice to the otherwise chaotic combats since they’ll often have handy combat abilities. My main henchwoman – a goggle wearing hacker – had the handy ability to disable a do-gooder’s weapon, causing damage in the process. 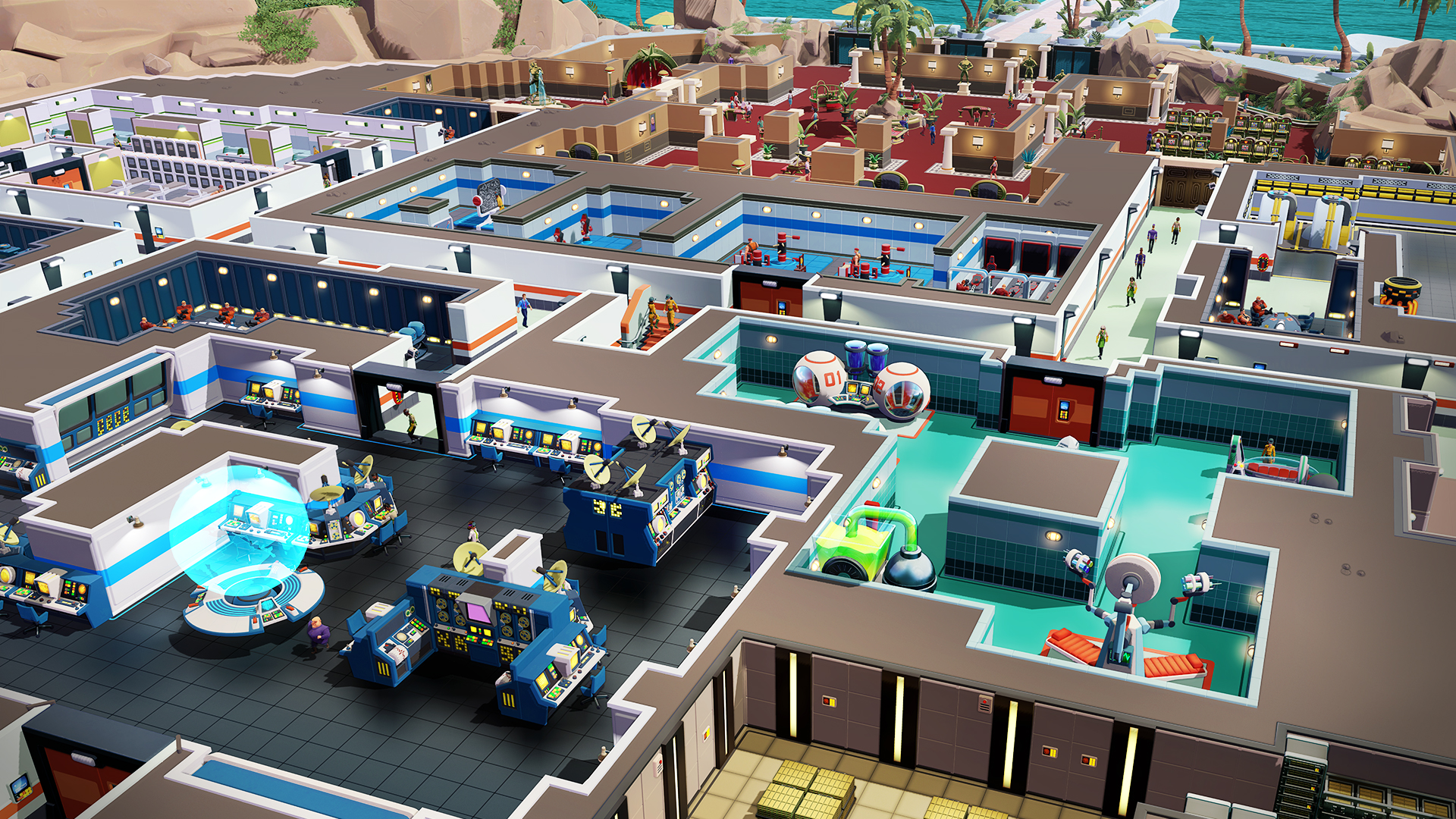 Still, the tactical parts of the combat are still pretty thin on the ground, and the fights are mainly a spectator sport instead of something you feel really involved in. Distracting, capturing or murderising invaders would be more fun if it was more interactive and less routine.

The wider sweep of your global wrongdoings are coordinated from the global operations screen where you can set up criminal networks around the world and run evil schemes. Primarily you’ll either be running schemes to pilfer cash or to lower the resultant heat gain from the regional authorities as your grand larceny gains more attention.

This part of the experience is perhaps the weakest one, as switching between making money and lowering heat for each of your territories is rather simplistic and it can get pretty repetitive. A little more refinement would have worked wonders here to make managing your wider shadow empire feel less like busywork.

When I left my Maximillian sitting alone at his conference table he would periodically jump up onto the golden globe in the middle, cackling madly and grabbing it covetously. There are a lot of cute little animations like this that really give the game a lot of verve and personality. It’s honestly hard not to get attached to your minions as they go about their daily routines, which makes it all the harder to execute one of them to “motivate” the rest. When playing I could only feel relieved that my minions never considered unionizing. A bit of time watching TV and staring into the flickering lights in the “re-education” pods seemed to do the trick just fine.

What really gives the management aspect of Evil Genius 2 real shape and structure are the side stories. The side story visual novel sections are always well-written and never fail to raise a chuckle. It always made me laugh how Maximillian had a sneering Germanic accent but my workers seemed to have a jarringly gentle Northern English accent as they politely suggest potential issues with his genocidal plans. Side stories involve more demanding tasks on the world stage, meaning you’ll need to commit more workers, but also yield greater rewards such as pieces of valuable loot and new henchmen. 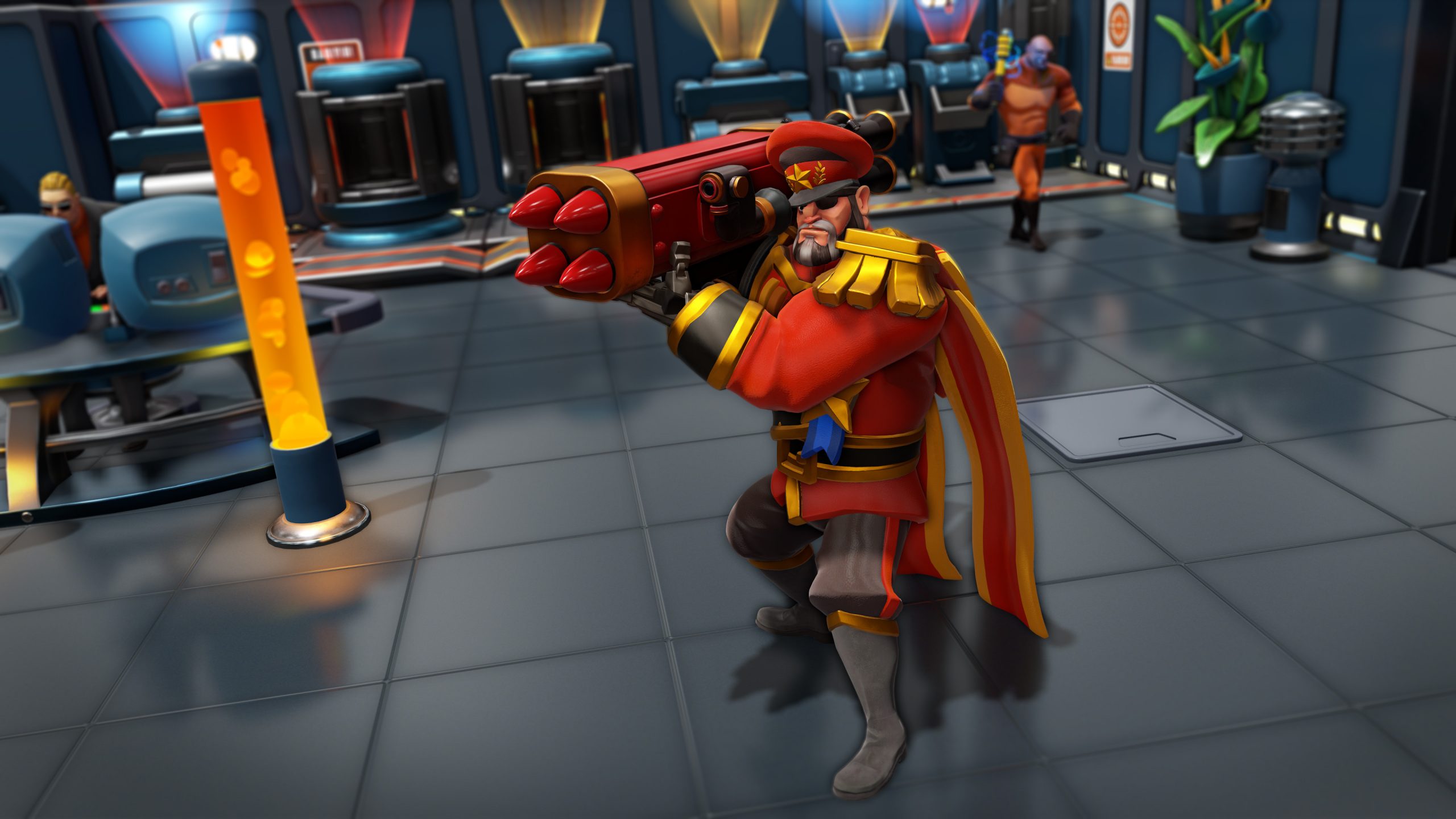 No villain can truly be complete without a hero to foil their schemes and this is where super agents come in. Super agents will monitor your activities on the world stage, and the more you commit crimes in locales where they are, the more likely they’ll be to attack your base directly. These super agents are particularly strong, and even when you defeat them they’ll disappear in a puff of smoke and vow to be back next time to smite you in the name of justice, and can only be defeated for good by completing a special side story. These super agents add an element of peril to the proceedings and prevent the management aspect of the gameplay from ever feeling too safe and settled.

I’m looking forward to meeting a smooth, debonnaire secret agent who’ll be seducing my henchwomen and making foolhardy yet successful gambles at my casino. I’m longing for him to infiltrate the base so I can brag to him at length about my plans. I’m waiting to put him in some sort of needlessly elaborate and easily escapable situations like slowly lowering him into a pool of ill-tempered sea bass. Somehow he’ll always escape my clutches up until an amazing big-budget fight scene at the end.

And I may yet encounter a story like this too! Even in over ten hours of play I barely even scratched the surface. There are an absolutely huge assortment of side stories on offer, and with unique stories for each of the four playable masterminds, Evil Genius 2 will have you discovering interesting new stories for many many hours.

Evil Genius 2 is a surprisingly addictive (evil) management sim. Despite there being a bit of repetitive busywork to do, there’s plenty of global domination wickedness for even the most power-hungry megalomaniac to sink their avaricious teeth into.

Full Disclosure: This review is based on a copy of Evil Genius 2 given to Hey Poor Player by the publisher 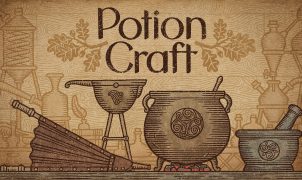