This is where your sanity gives in and the love begins 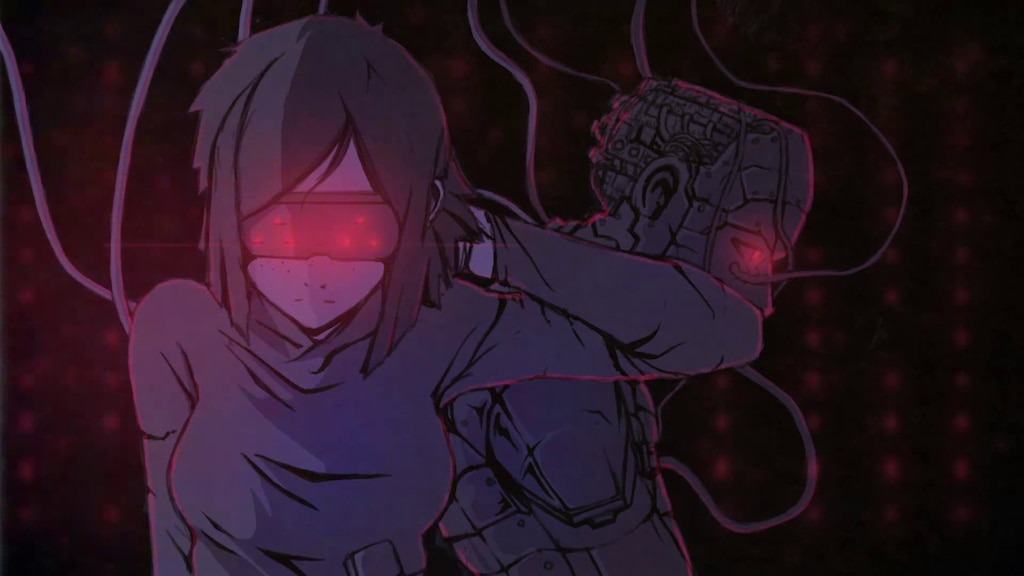 It doesn’t matter how many movies, games, or books with Cyberpunk themes exist — there will always be a call for more. We find beauty in Cyberpunk’s aesthetics but melancholy in the increased isolationism that seems to be the culmination of decades of the hyper-consumerism encouraged by unfettered capitalism. It’s an avenue to explore a sick, toxic society and the depressed acceptance its captive individuals feel, coping with unnatural products and environments ironically meant to epitomize the height of human progress. Some see it as an awesome future where they get to be some sort of neon protagonist; others, a dystopian hellscape where people have lost all control of personal freedom, anonymity, or security. Then there are others that see it as the inevitable, focusing on other things as they choose to simply exist, subsisting only to perform functions not yet automated, and wait for death.

That was Cila’s attitude in Synergia, a “yuri thriller visual novel that takes place in a cyberpunk future, wrapped up in a beautifully unique, vibrant neon aesthetic.” Originally released on Steam back in July of 2020, Synergia arrived on the Nintendo Switch on March 18, 2021 with an introductory price of $11.99 (regularly $14.99). With a dark, moody atmosphere and engaging music to really set the stage for cyberpunk goodness, Synergia attempts to pull from the classics while creating something uniquely its own. 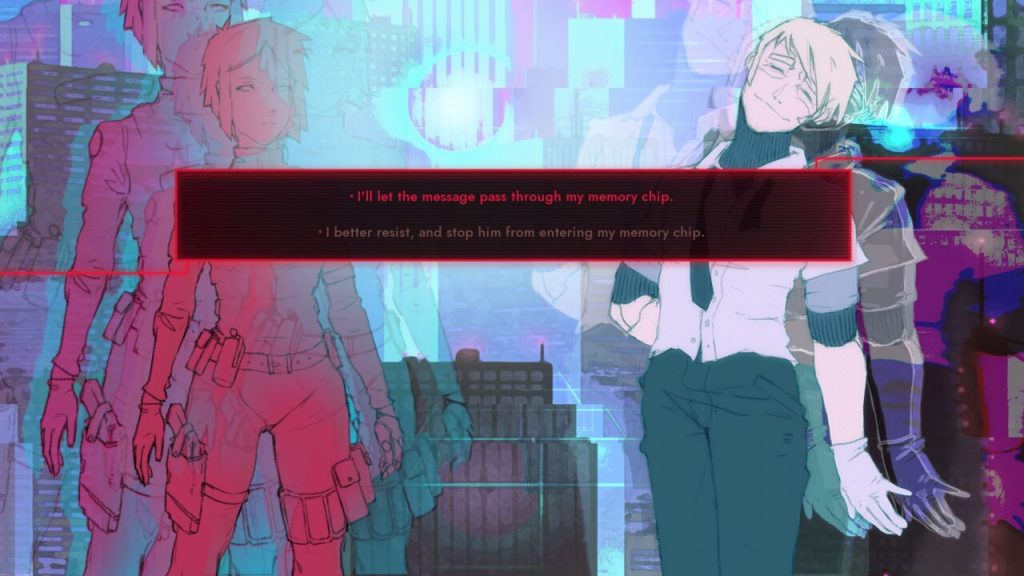 For the uninitiated, visual novels are exactly what they sound like — novels with sensory components, like music or pictures, thrown in to really set the story’s mood. As such, games in this genre are more reading, less doing, so if you’re not up for an actual novel, Synergia may not be your cup of tea. Additionally, yuri refers to the Japanese genre showcasing lesbian romance or “girl love,” which has a long history as a literary genre originating as schoolgirl romances that were intensely emotional but otherwise relatively platonic. Although some visual novels have limited mechanics, such as points of interest to discover or choices that can alter the protagonist’s course, Synergia is very much a novel in every sense of the word, presenting players with only three possible choice dialogues, only one of which making any true impact on the story whatsoever.

In Synergia, players will follow the story of Cila, a special agent who commands a task force dedicated to android cases. Subduing a black market android gone haywire or redirecting a hacked android’s actions back to its initial purpose is just part of her daily life, eking out this cyclical existence only to go back home to a tiny apartment and a boring, characterless android who takes care of her. Bothered by the false personalities of androids but finding herself unable to make meaningful connections with actual humans, she struggles with her deepening isolation, wondering if she should do something — anything — to change. 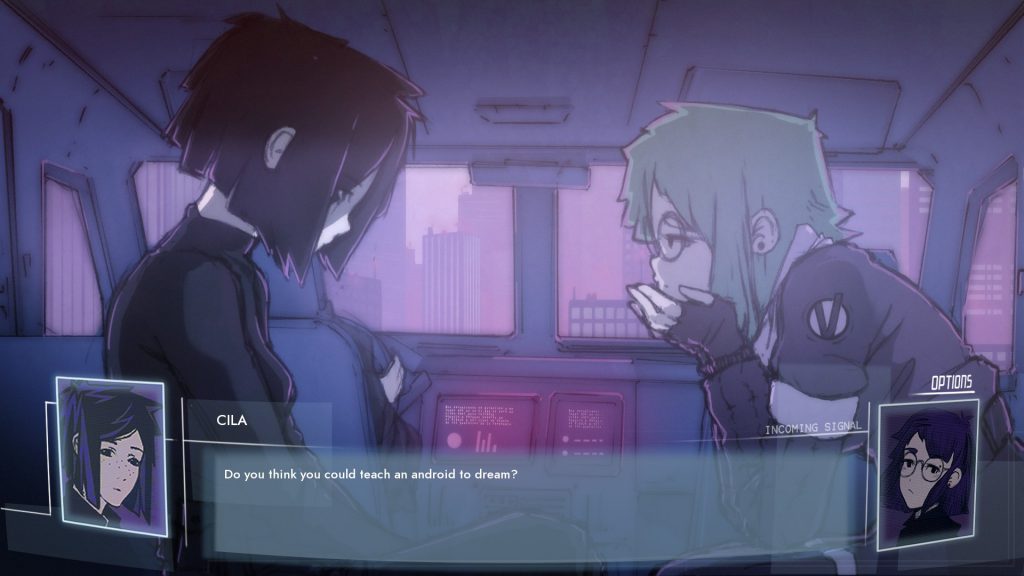 That day suddenly comes when her android factory resets without warning; disheartened by losing the closest thing she had to a companion, she begins to figure out a solution when — out of the blue — an old friend, Yoko, contacts her. It seems Yoko got an automated call about the android resetting, and as she runs an android shop, she just so happens to have something special just for Cila. Skeptical, but interested in seeing her after a long time, Cila visits Yoko to see about the new android. It is here Cila meets her new biological anroid, or biroid, Mara; it is here Cila’s life is put on a course of dramatic change, unbeknownst to her.

Synergia does quite a few things right — for one, it sets a glorious atmosphere. The use of color and lighting is perfection on the visual side, and the music keeps things incredibly intense. It lends itself beautifully to a world that has as many moments in the sun as it does in its darkest depths, showcasing the oft-forgotten lighter side of a cyberpunk dystopia. A child android adoption implies parental yearning is as strong as ever; days off from work don’t always mean drug-fueled coping sessions, but can instead feature simple dates or urban exploration. Synergia’s story itself is legitimately interesting in the first half as well, building up to something that will clearly be bigger than Cila, Mara, or any of the other characters involved. I genuinely liked Cila’s personality and found her to be pretty realistic, and the yuri portions of the game were softcore at best, focusing instead on the heavy, illegal emotional connection being fostered between human and machine. 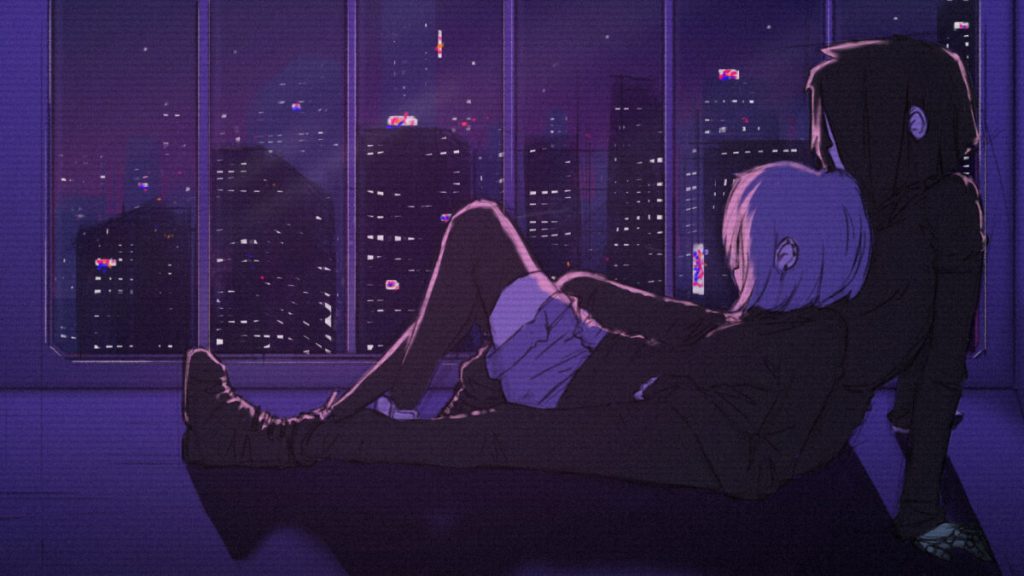 Unfortunately, this is where things take a disappointing turn; there are multiple endings in Synergia, the ending dependent on what you choose in one critical moment in the story. Should you find yourself reading the Good Ending, the story almost becomes too big for itself with some loose ends closed by introducing far more complicated plot points that could have been talked about much sooner. Cila ceases to be a person and instead is the receptacle for exposition, dazed and bombarded until the last possible moment. In the Bad Ending, the story is actually not all that bad and in fact is preferable to the so-called Good Ending by plenty on the Steam discussion boards. There’s also a hidden epilogue that provides even more content after unlocking both endings, the entire game taking approximately five to seven hours.

Although I find myself frustrated with not only the story’s complicated ending but the way in which it was delivered, I am equally drawn to Synergia for how it handled Cila’s method of coping with her rapidly developing world. There were so many points during the game that I found myself thinking “this is exactly how I would handle this” or “this is what I would feel in this situation” until it dawned on me — this actually feels like a depressed female protagonist. Even though Cila was a highly competent special agent who was capable of anything required of her, she never truly felt like she had the power to take down organizations or fix any injustices. She just punched a timecard and performed the bare minimum when it came to human interactions, choosing to direct her anger and depression inwards, resembling something closer to self-loathing, instead of outwards and taking it out on others. Although plenty of other female characters did have greater ambitions that were violently fulfilled, Cila felt real in her depression and despair, and that was oddly relatable in an unfamiliar cyberpunk world.

Synergia has a slow start, a scintillating middle, and some odd ends, but as an entire package it’s a solid yuri cyberpunk visual novel that has some forgivable offenses. With incredible aesthetics and real, raw characters, Synergia paints a dark and moody picture and, for the most part, delivers on its promises. If you’re interested in a cyberpunk love story that pulls heavily from classics like Blade Runner, Akira, and Ghost in the Shell that is perhaps too interesting for its own good, give Synergia a download.

Editor’s note: This review is based on a copy of Synergia provided by the publisher.