The End Is… Meh 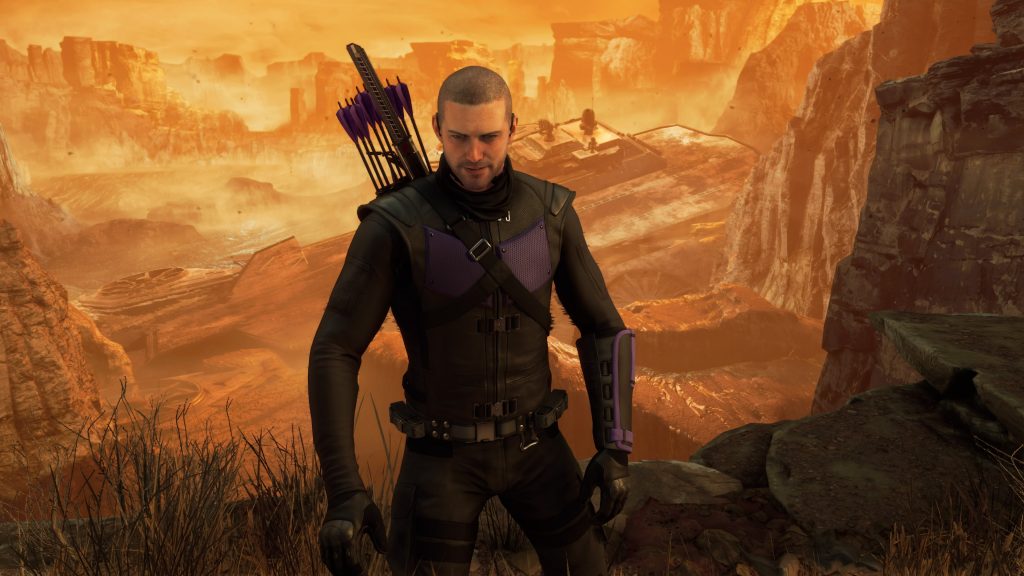 It’s been over six months since the original release of Marvel’s Avengers, a game that HeyPoorPlayer has been covering extensively since its debut. With delays to fix various in-game glitches, atop of the delayed monthly content release for the game’s DLC that started first with Kate Bishop, Marvel’s Avengers finally sees the arrival of the long-awaited PS5 upgrade along with the release of the Clint Barton DLC and his Operation: Future Imperfect campaign.

Developed by Crystal Dynamics and Eidos-Montreal and published by Square Enix, Marvel’s Avengers released on September 4th for PS4, Xbox One, Stadia and PC. This is the second DLC after Kate Bishop’s Operation: Taking Aim that was released back in December. And though this one was incredibly short in comparison, it did focus on the free PS5 upgrade, which has been a little confusing. But overall, it was nothing short of fantastic in terms of overall improvements in the gameplay.

How Do I Feel? Like An Awesome Zombie With Great Hair 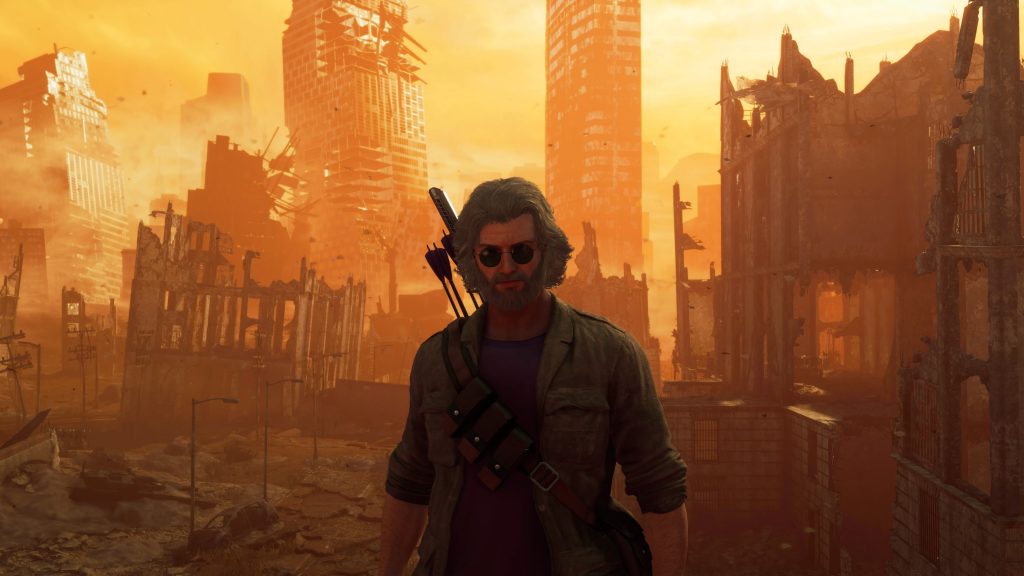 It’s been a long time coming for any Hawkeye-related material. Clint Barton is not only one of the original Avengers, but he’s also only been vaguely featured in the MCU. When Marvel’s Avengers last left off, Clint was unconscious after helping Kate due to the exhaustion of time travel. Which is why when the story begins with a visit to him in Kate’s bed, we reveal in a dreamy-flashback a very Kurt Russell-looking Old Man Hawkeye. Now we must learn about and navigate this new desert landscape set in the post-apocalypse.

Now, much of Operation: Future Imperfect is adapted from the Hawkeye comic, My Life As A Weapon. And without spoilers, overall it’s a fun tale. Atop of this, the charisma between Kate and Clint is really engaging in this story as sort of a little sister/older brother type of vibe. Sadly, there isn’t much chemistry between Clint and Natasha, which was slightly disappointing. However, the game does introduce a beloved character with Lucky the dog, Clint’s longtime companion. 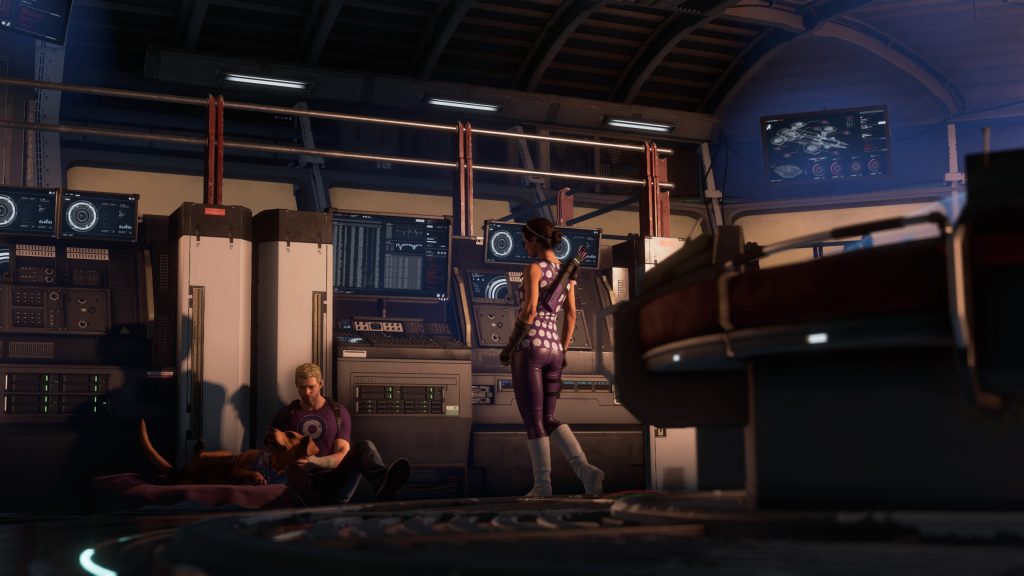 Just like Kate, Clint works as a marksman and swordsman. Lacking Kate’s teleporting mobility and mobility on the whole (he runs like he’s got something stuck between his legs and is arguably the slowest character in the game), Clint makes up for it with his powerful attacks and better arcing swings of his blade. Clint is also able to take down small enemies easily with precision, as he comes with a large array of arrows to utilize in his arsenal. He is honestly the best ranged character and sniper in the game and most of his damage can be dealt from far away, though his Rhonin blade can hit hard in wide arcs too. The only downfall to Clint is that he doesn’t hit that hard, especially against tougher foes.

Hawkeye can rain arrows from the sky, use healing arrows, trip arrows, pulse arrows, and close the distance easily. Though it’s really his split-shot homing arrows that stand out as they’re the best ranged attack, second only to Iron Man’s missiles. Atop of this, Clint has one of the most overpowered finishers in the game. Clint also has an ultimate arrow called the Hunting Arrow, a radar-guided projectile that’s AI-controlled and bounces between enemies. It works exactly like Yondu’s whistling arrow from Guardians of the Galaxy, destroying entire armies in his path. 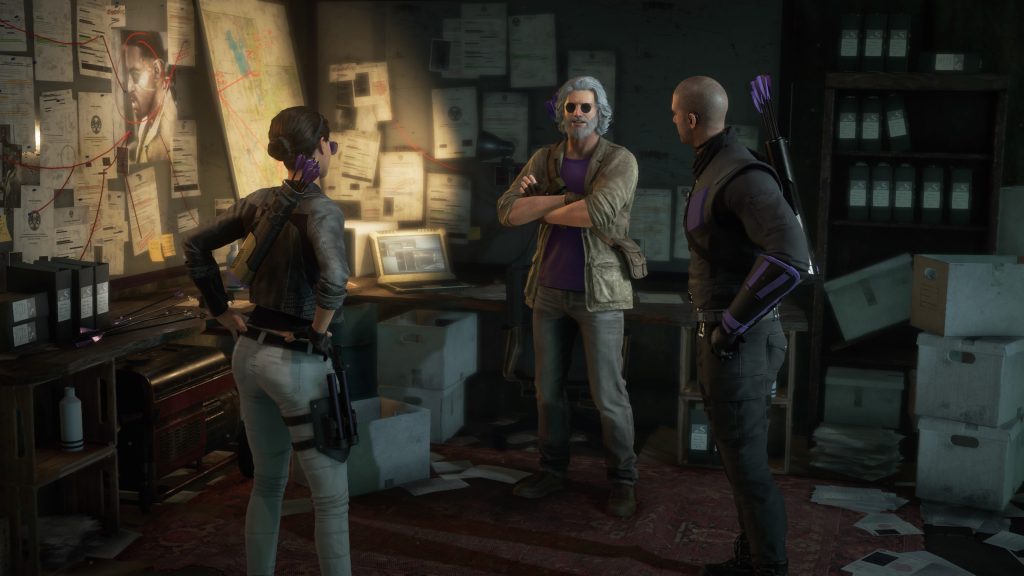 Future Imperfect is a mix of both the Old Man Hawkeye and, oddly, the Old Man Hulk stories from the comics. A glimpse of the future shows that the world ends due to The Avenger’s failures. The big ordeal is to try and locate Nick Fury, the leader of SHIELD so that they can try to stop this from happening. Whereas Kate utilizes tachyon energy in quantum mini-leaps (her teleport) and time-travel, this time around Clint Barton is dealing with a storyline focused on Cosmic Energy. A future needs to be altered, and in doing so, we change the fate of reality (which apparently is what Cosmic Energy manipulates).

The game’s new map is set in the ruins of the old world. A wasteland where Old Man Hawkeye treks, which eventually the team will have to explore. In the storyline, we learn that future Hawkeye retired just moments before the great war ended the world. Now he’s on a quest to meet Fury to undo the damage. Though be warned, both the storyline and the ‘U in Funeral’ mission are much shorter than Kate’s campaign. All of which concludes a small beat, as the grander AIM, Monica, and Kree storyline seems like it will be dragging all season.

Most of the missions are still getting from point A to point B. The villains seen in this are of course Taskmaster, but also a future Maestro Hulk. Who, while entertaining, seems to lack any real development despite being promoted in the trailers. It also continues an issue fans have with the series, myself included, that there isn’t much boss diversity as we’ve seen plenty of battles already with Abomination (who is basically Hulk), Taskmaster, and Robots. 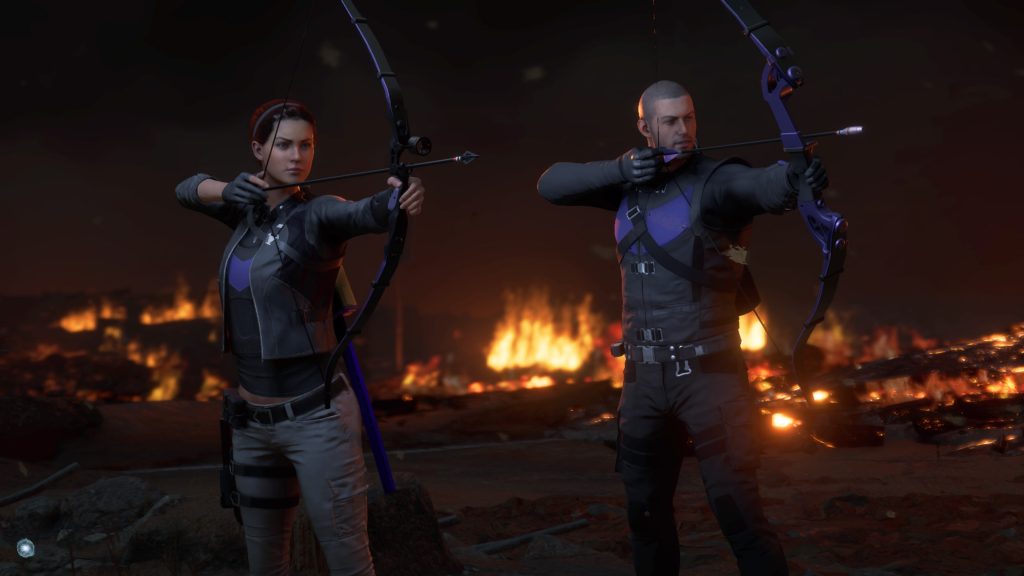 For what this DLC lacked, I will applaud that the PS5 free upgrade makes a major difference in gameplay. High-Performance mode lets players utilize 4k combat in 60 FPS, while High-quality does wonders for some great visual quality and photography. Though it is lacking Ray-Tracing. There’s also the new utilization of the PS5’s haptic controller, which allows for creative vibration senses and trigger resistance (try both Hawkeye’s arrows!) along with new popping sensations and sounds. However, I will admit the controller can be tiring on the hands, especially when vibration emulates motion sensation in things such as running.

Added into the game itself is a new Harm Room challenge. Their parameters can be set for enemies along with buffs in what’s basically a glorious practice mode to try out any and all possibilities. The game also has added an in-game cargo runner Synthroid that can randomly appear which, if beaten, rewards players with a box of loot if you defeat it before the bot runs away. Though the biggest improvement in the game is that you can finally play the Reassemble campaign over! Which is something fans have wanted since day one, given that the story is Marvel’s Avenger’s best feature.

Atop of this, you can now also transfer a PS4 save over via save migration, much like in Spider-Man and Spider-Man: Miles Morales. Fair warning though, it is frustrating and not streamlined well, as you’ll need to download both the PS4 and PS5 versions of the game on PS5 for the transfer to work. You’ll also need to upload the save on the PS4 version online before downloading it on PS5, but only after also downloading the PS4 version on your PS5 because the game can glitch otherwise. I know that sounds confusing. But those are the steps it has to be done in, which is a big flaw in the game.

A Bullseye In A Defeated Game

Overall, the Future Imperfect campaign for the Clint Barton DLC is a fun but somewhat shallow DLC compared to Kate Bishop’s Taking AIM. Though Clint may be the better archer than Kate, his playstyle is also much slower in comparison. Thankfully, the PS5 upgrade is a lot of what fans wanted out of the game and there are some enthusiastic players now returning back to the game, especially with the planned Black Panther DLC to release this summer. Whether it will be enough to save the game, however, is uncertain.