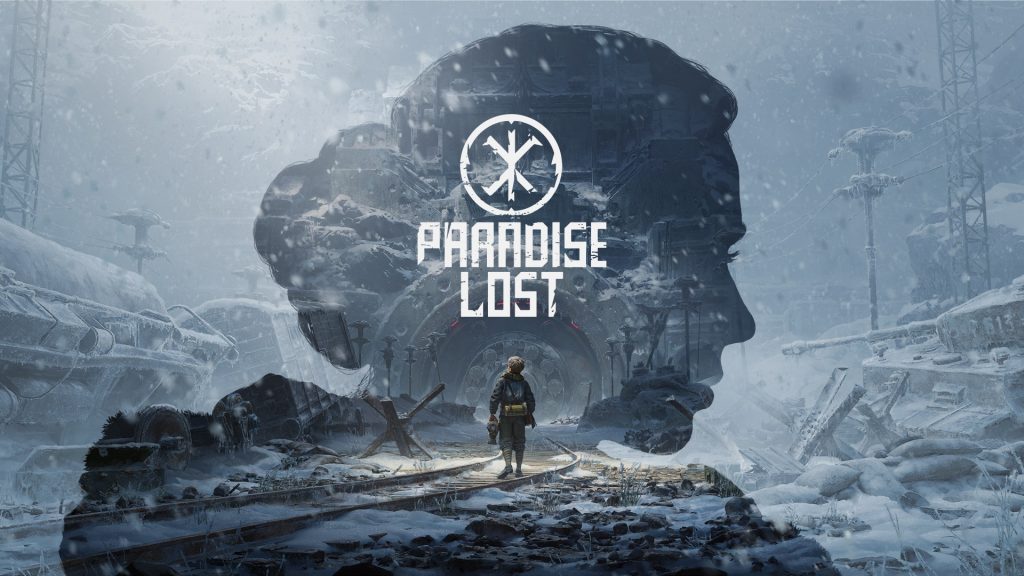 Set in an alternate timeline where the Nazis nuked Europe and retreated to massive underground bunkers to wait out a nuclear winter, Paradise Lost tells the story of Szymon, a 12-year-old boy who ventures into one of these shelters in search of his father. Developed by Warsaw-based studio PolyAmorous Games, it presents the player with a grim alternate history lesson full of tough philosophical questions while immersing them in a strange and captivating world.

However, while the Third Reich plays a significant part in the game’s story, you won’t be blasting any Nazis in this adventure. Paradise Lost shares more in common with walking simulators like Gone Home and Firewatch than it does Wolfenstein: The New Colossus. It’s all about intelligent exposition and tense exploration. Like Bioshock before it, it tells the story of an advanced society destroyed by its unchecked ambitions. However, instead of touring its crumbling corridors and grand granite galleries with a Thompson machine gun in hand, you’ll be methodically combing through the environment to piece together the events that led to the shelter’s collapse. It’s a reflective, emotional adventure that touches on painful subjects not often explored in video games. But does Paradise Lost provide a story worth telling?

The Pride And The Fall 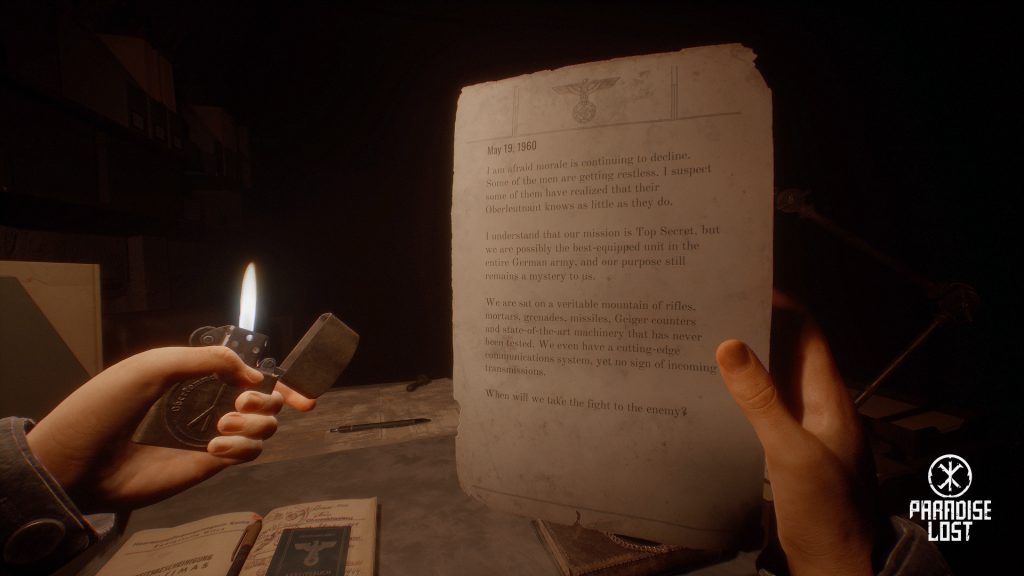 Most of Paradise Lost’s story is fleshed out through the countless notes and voice recordings you’ll come across.

Paradise Lost‘s story unfolds through conveniently placed notes and audio recordings spread across the facility like a trail of breadcrumbs in typical walking simulator fashion. Through them, we’re given insight into the shelter’s former inhabitants’ lives, and the shadowy events conducted deep in the facility. Considering the bunker was designed to sustain the Aryan race while the world above was ravaged by nuclear radiation, it’s unsurprising that the story delves into some pretty heavy themes. Human experimentation, forced insemination, genocide, and other equally uncomfortable topics are explored throughout the game’s narrative.

But despite its horrifying subject matter, the way the game introduces these subjects never comes across as forced or too heavy-handed. Everything is treated with the proper seriousness and solemnity it deserves rather than thrown in the player’s face for shock value. I genuinely appreciated this approach to Paradise Lost‘s storytelling, as it made the narrative feel surprisingly grounded and impactful despite some of the story’s more fantastical sci-fi elements.

Shortly after Szymon arrives at the bunker, he comes into contact with a mysterious girl named Ewa through the bunker’s radio system. Ewa essentially serves as Szymon’s “radio buddy” and guides him from one objective to the next. While the relationship between these two characters takes time to develop, their connection eventually grows and becomes the main focus as the threads of their tragic stories begin to intertwine. Without a doubt, their relationship is the most compelling part of the game’s story. And even though I saw its major plot twist from a mile away, the narrative kept me hooked thanks to Paradise Lost‘s exceptional writing and worldbuilding.

Take Me Down, 6 Underground 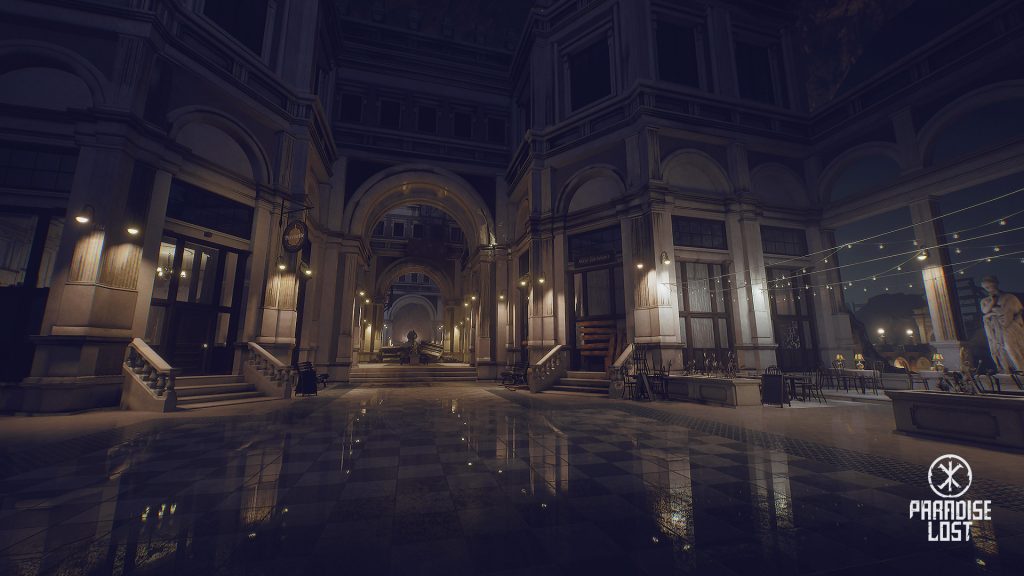 The bunker’s abandoned boutiques and houses are quite unsettling.

As far as settings go, Paradise Lost‘s bunker is pretty incredible. Every room seems to tell a story. Tables adorned with fine China reserved for the long-dead upper crust of Nazi society sit abandoned in posh dining halls. Roots and vines twist and turn through the stone walls of a seemingly impregnable prison as if staging history’s slowest jailbreak. And a long-abandoned villa sits on a stretch of artificial beach miles beneath the surface where the sun could never reach.

I couldn’t get enough of the imaginative environments found in Paradise Lost. You would think exploring a bunker would be dull and drab. Thankfully, that’s not at all the case. Developer PolyAmorous Games deserves credit for crafting a truly breathtaking subterranean world designed to both terrify and excite the player with its thoughtful combination of grime and grandeur.

Paradise Lost‘s visuals and artistic direction are exceptional. However, the voice acting does leave a bit to be desired. Szymon’s voice actor’s performance sounds tired and disinterested. And, as you can probably imagine, this makes some of the more emotional moments in Paradise Lost‘s narrative less impactful than they could have been. This is hardly a deal-breaker, of course. Eventually, you start to notice it less and less. But again, given the game’s rather intense subject matter, Szymon’s indifferent tone is quite jarring and hurts the game’s immersion a bit.

In addition to the uneven voice acting, I also have to mention the glacial pace at which your character moves. Szymon could very well be the slowest character I’ve ever seen in a video game. He walks with all of the urgency of a drunken snail. I can only assume this was done to artificially pad the game’s length or heighten the tension. Thankfully, I was too busy taking in the game’s breathtaking environments to care too much. Still, I can imagine the plodding pace at which your character moves to be a turnoff for some.

If you’re looking for a game that will keep you busy, Paradise Lost may not be for you. It’s an essentially linear journey with no real puzzles to overcome that will take most players about 4 hours to complete. There are multiple endings and a handful of scenarios where your decisions can impact the story. But given how much of the game is spent just poring over the same notes and audiotapes as you follow a rigid path, I’m not sure most players will feel compelled to fire up the game a second time once the credits roll. Though if you’ve got a soft spot for walking simulators, I recommend playing through the game at least once because it’s absolutely a story worth experiencing.

Paradise Lost is a grim alternate history lesson that asks tough philosophical questions about humanity and sacrifice. With a fascinating story and a genuinely engaging setting, it’s a game that’s easy to recommend to fans of the adventure genre. If you don’t mind the game’s lack of puzzles and plodding pacing, then be sure to make your way underground to uncover the bunker’s dark secrets. You won’t be disappointed. 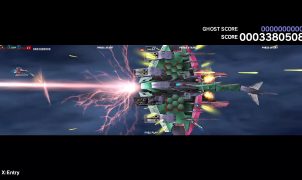