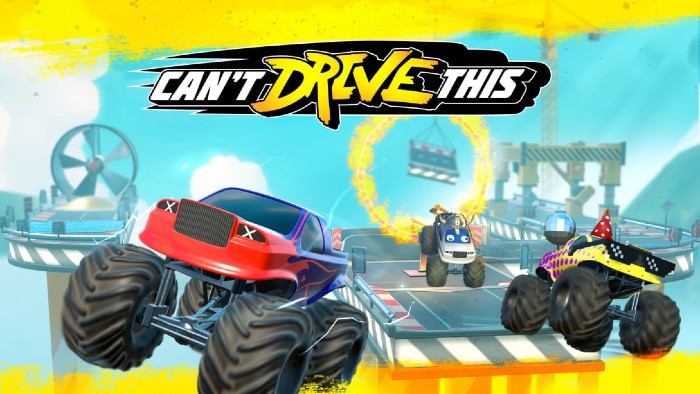 Speed was a terrible movie. For those who didn’t live through the 90s and suffer through it, it starred Sandra Bullock, Keanu Reeves, and a runaway bus that would explode if it went under fifty miles an hour. There’s something about a mad bomber, and ridiculous, inexplicable hijinks ensue. It goes on and on for what feels like forever. For so long, in fact, that you start to wish that you too could explode like a runaway bus if only so the pain will end. Can’t Drive This is kind of like Speed in that if you go too slowly, you will indeed explode, which is fine because, unlike the movie, you’ll laugh, restart, and do it all again.

Can’t Drive This is all about co-op, so my husband and I decided to review it together. My comments begin with “SM” and his with “DT.” 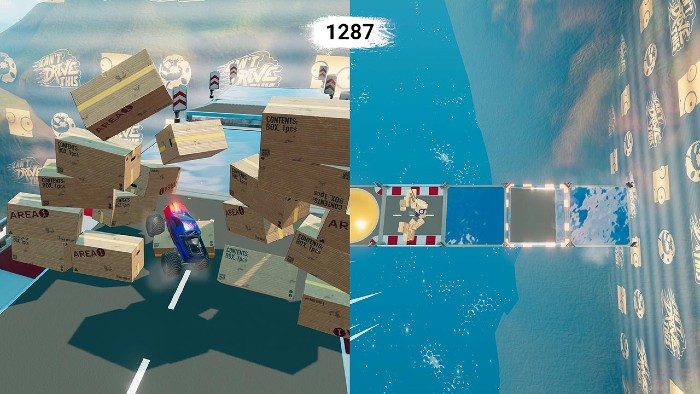 SM: Can’t Drive This combines two of digital racing’s favorite pastimes: racing and building tracks. In this case, both occur simultaneously. One player drives, and the other player builds. Square track pieces randomly generate for the builder who has to try their best to assemble a track the driver can actually drive on. There are a bunch of different track tiles: straight, curved, bumpy, water, fog, jump, and a flaming hoop, but those are the boring ones. You’ll also get giant hammers, spinning fans, draw bridges, and stacks of boxes.

Due to the game’s non-linear nature, it’s difficult to plan ahead because you never know what you’ll get. You might get four straight pieces and then you might get four jumps, which is exactly as devastating as it sounds. You can’t discard pieces, but you can set them to the side…if you think you have enough time to do that. The builder also can’t build too far ahead of the driver. While the builder is busy trying to assemble a hodgepodge track out of nonsense, the driver is busy trying to navigate the track and its obstacles…keeping in mind the speed limit. You’ll know if you’re going too slowly if your car starts screeching and glowing like it’s made out of lava—just like in real life.

DT: The core gameplay is just wild. While the driver’s job is plenty difficult, the builder (track-layer?) has an even more difficult job. Whoever is placing each new square of track has to rotate it into place before placing it. If you forget to rotate it the way you want, it can become totally unusable to the driver. On top of that, you’ve got to communicate about the pieces you’re placing. Sounds like it’d be easy enough, but the player placing the course tiles has a top-down view, so remembering what’s left or right for the driver is very, very challenging. Try keeping all that in mind, and it’s no wonder that you’re soon yelling. In a good way, though. The disasters you inadvertently create by placing the wrong squares leads to a lot of laugh-yelling.

If You Build It, They’ll Explode 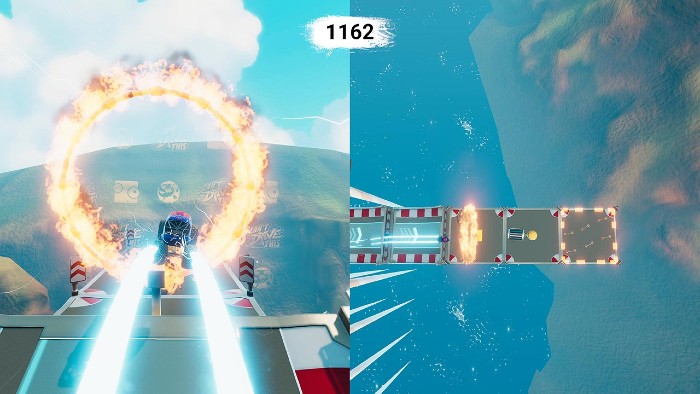 SM: Can’t Drive This has four modes: Lone Racer, Yardage, Game of Drones, and Capture the Egg. Lone Racer is single-player and forces you to switch between building and driving, and it frankly just doesn’t work. Communication (or lack thereof) is part of what makes the experience enjoyable, and yelling at myself for screwing up just isn’t as fun as blaming it on someone else. That and trying to manage both at the same time is just too complicated. That’s not surprising because this game is all about multiplayer.

Yardage and Game of Drones support two to four players. The goal of Yardage is to build and travel as far as possible. There are also glowy orbs called Holos that you can snag to score extra points. It has an arcade feel to it that encourages repeat attempts. More players means more building and driving, which might not make it any easier, actually.

In Game of Drones, the builder must build a track that will lead the driver to the Holos. Collect all the Holos, and you advance to the next level. The challenge here is that, true to its name, the driver will be hounded by drones that drop EMP mines. If you drive into one of them, you temporarily lose control of the vehicle and you slow down. It’s not a guaranteed death should you hit one, but it’ll definitely make your hands sweat.

Capture the Egg is only for four local players, and I, unfortunately, couldn’t round up enough people for it (I have friends. Shut up.). It’s Capture the Flag but with eggs instead of flags and you tow them while…the track is being built. I’m sure it’s as wild as the other modes.

DT: Can confirm that one of the best aspects of this game is getting to yell at one another for making dumb mistakes. Whether you’re driving and go the completely wrong way, or you’re building and accidentally place an impassable wall down right in front of the driver, the frantic yelling and attempts at correction make this game hysterical. More than once, my husband and I were left laughing ridiculously hard. It’s especially great when you start yelling nonsense directions to the other player—like when I tried to tell the driver to go “up” as if he knew what direction that could possibly be, thanks to the difference in camera views. 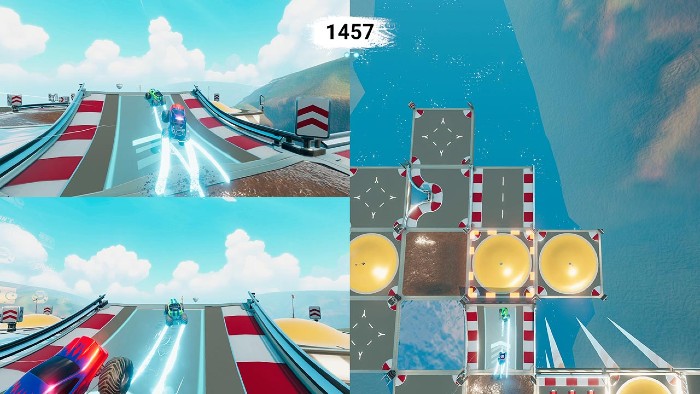 SM: Can’t Drive This is definitely a party game. It’s got the right vibe, and it’s pick-up-and-play style is perfect for groups of adults who are (responsibly) drinking. It’s great in short bursts, and it’s mechanics are well-suited for even casual gamers. Of course, that means its shortcomings are fairly obvious.

Even with four modes, there just isn’t a ton of variety. It doesn’t take long for the gameplay to grow stale. It can also be hard. I mean, really HARD. The difficulty is totally dependent on the track pieces you get, which means you might last five minutes in one round and five seconds in the next.

I usually don’t say this, but I actually wish the game had an easy mode, just so I had more time to get a feel for it in the moment. Even after playing for a few hours, I’m still not particularly great at it. I’m much better at the driving portion than the building portion, for sure. A few adjustable variables like omitting certain pieces or being able to adjust your blow-up time would have been nice.

DT: Can also confirm that Scottie is much, much better at driving than building. And weirdly enough, I was much, much better at building than driving. We definitely still switched back and forth multiple times, but it was pretty clear which role we were best suited for. I also have to agree that I wish there was some scalability for the difficulty. I know part of the game is the difficulty and challenge it presents, but it seems a little unnecessarily brutal at times. It would have been kind of nice to be able to get longer runs going without it getting quite so stressful.

We aren’t the Winners of Game of Drones 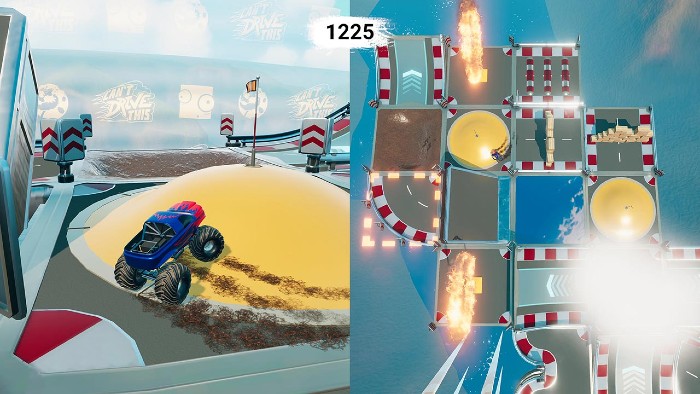 SM: I enjoyed Game of Drones the most. There’s more flexibility because you aren’t just building to see how far you can go. You have to try to place pieces strategically to reach all the Holos. That’s a hell of a challenge for the builder. The driver has to contend with all those drones and whatever nonsense the builder accidentally cooks up. For example, during one round, I was driving through hammers and sharp curves only to find a poorly placed ramp that would have sent me soaring to oblivion. So, while trying not to explode, I slammed on the breaks and reversed…only to collide with the aforementioned hammer, which promptly punted me to death. It’s pretty wild.

DT: Agreed, the best game mode we played was Game of Drones. It’s got a sort of puzzle aspect to it that I really liked, and the challenge presented by those damn drones was really unique. Frustrating at times, but in a good way. Communication is even more important in this mode – and even more difficult, because you’re not just building in a straight line.

SM: Can’t Drive This is an absolute riot. It’s ridiculous, over the top, and you’re practically guaranteed to laugh until you can’t breathe. It’s unfortunate that it runs out of gas so quickly, though.