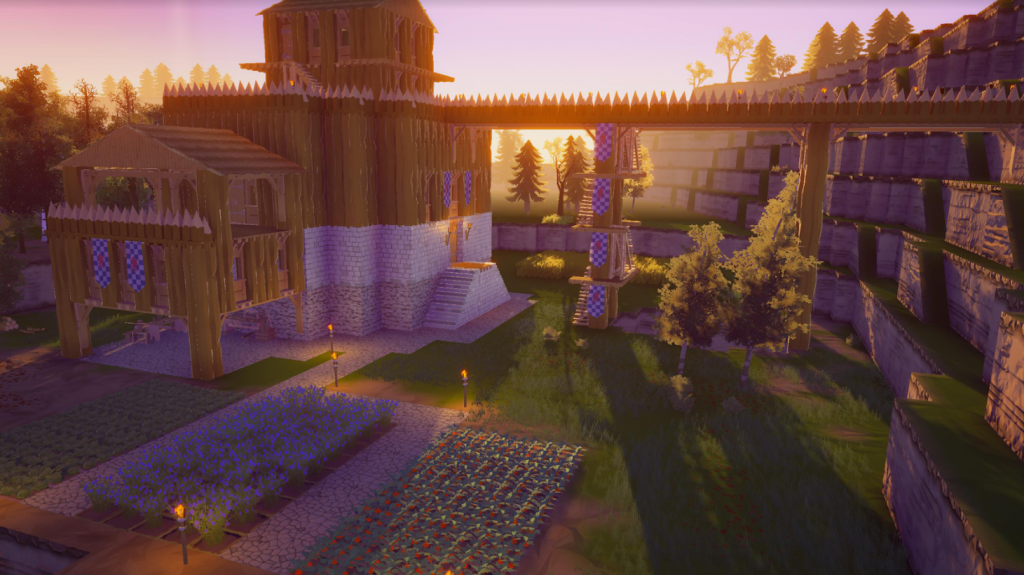 It’s the end of the 14th century; Europe is slowly recovering from the horrifically devastating Black Plague, survivors timidly daring to hope that a new life could be borne out of such widespread tragedy. Taking back the land that nature itself had reclaimed from humans snuffed out by the disease, the survivors decided to eke out a living on the formerly inhabited lands, building homes, farming fields, and cultivating the land for their purposes. Slowly, humanity imposes itself upon the land once more, a sense of normalcy beginning to calm the survivors, now thriving once more.

Such is the premise of Going Medieval, the new medieval city-builder currently in development by Foxy Voxel with publishing being handled by Irregular Corporation. Advertised as “Coming Soon” on its Steam page, Going Medieval encourages players to “construct a multi-story fortress in a land reclaimed by wilderness, defend against raids and keep your villagers happy as their personalities are shaped by the world!” With pleasant music, a calming art style, and plenty to farm, build, and craft, Going Medieval is sure to intrigue both city-builder fans and those who love Medieval vibes. 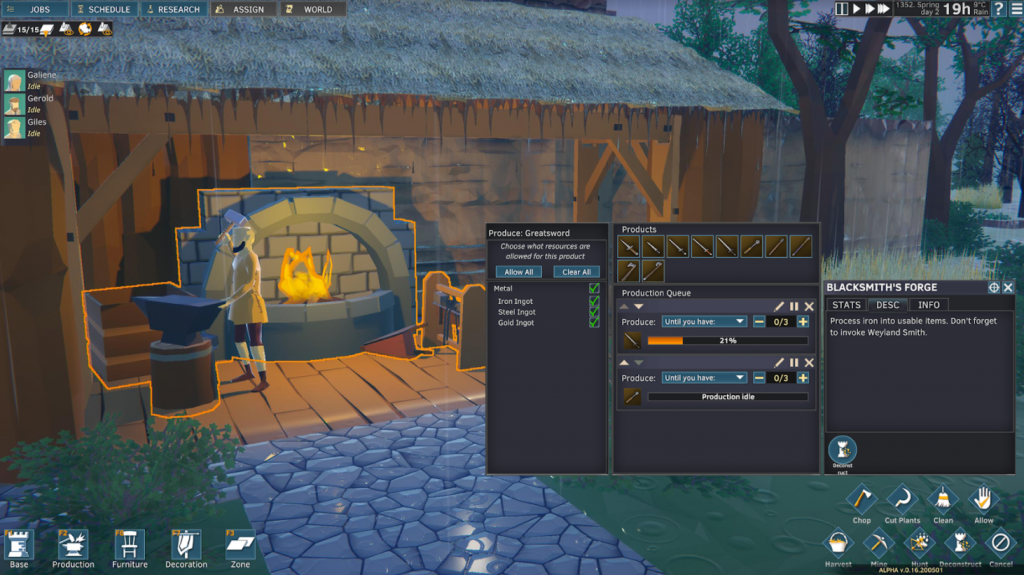 City-builders are in an interesting position; for one, the genre is oddly full in the sense that there are clearly so many of them and they seem incredibly similar to each other. Farm resources, build tiny towns into sprawling metropoles, and keep wheels a’turnin so progress can keep going until time immemorial. Additionally, settings tend to get repeated as well — from Medieval settings to Mars, city-builders, on paper, can appear as if they’ve been done to death… until you play two different ones and realize just how wildly they can diverge from each other.

As someone who immensely enjoyed Foundation but disliked Banished, I was honestly disappointed at first when I received more of the latter than the former in Going Medieval, but it only took 30 minutes for me to realize I was wrong and that everything was better than expected. When it comes to city-builders, it’s imperative to get at least two things right immediately: UI and resource chains/crafting. City-builders are usually menu-based with keyboard and mouse shortcuts to facilitate actions, while necessary items start off as raw resources and end as food in one’s belly or a roof overhead. A good city-builder makes UI intuitive and easy to remember, forgoing the temptation of providing the player too much freedom right off the bat and overwhelming the player and instead letting them learn the ropes slowly. Check that box off for Going Medieval — when it comes to UI, this city-builder is far friendlier than its hefty-from-the-gates counterparts. 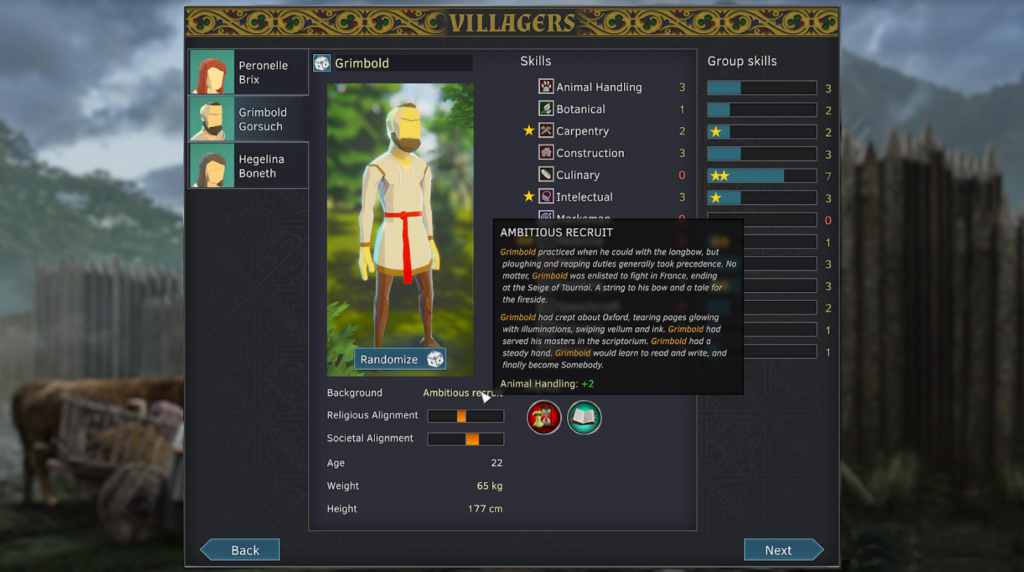 As far as resource chains go, Going Medieval again performs well. Items necessary for the most basic survival needs, such as food, are only one or two steps from raw to realized, while more involved items can be worked up to by unlocking them through research. I think my favorite thing about that is just how research progresses: from what I can discern, you craft what looks like books, then you offer those books up to …God? (idk where they go) in exchange for the research. It’s funny to think about making books, then reading them to learn the thing, but the details are arbitrary; the point to take home here is that research is a simple enough affair only held back by the amount of books you need to craft to unlock the next tier. All this means is that you’ll have one dedicated settler making books a lot while another one cooks meals, which leaves at least one or two to perform other tasks, like build or hunt. Going Medieval’s resource chains just click.

Once any given city-builder resolves those two things, it is then given the opportunity to differentiate itself from others in the genre. What Going Medieval decided to do was interesting; for one, I enjoyed that I could level up the skills of the individual settlers in things like marksmanship (hunting) or tending (healing wounded settlers); additionally, I really loved setting their schedules by the hour, allowing them to get a full 8 hours sleep, taking plenty of time for leisure, while still getting in all the productivity required. You can also equip individual settlers with weapons, like bows or swords, so that they may hunt game or fight off attackers, set traps for invaders, and gain glory for your settlement. It takes a second to realize all that Going Medieval does, but once you get a taste for it, you realize it’s actually really quite a dynamic, unique addition to the genre. 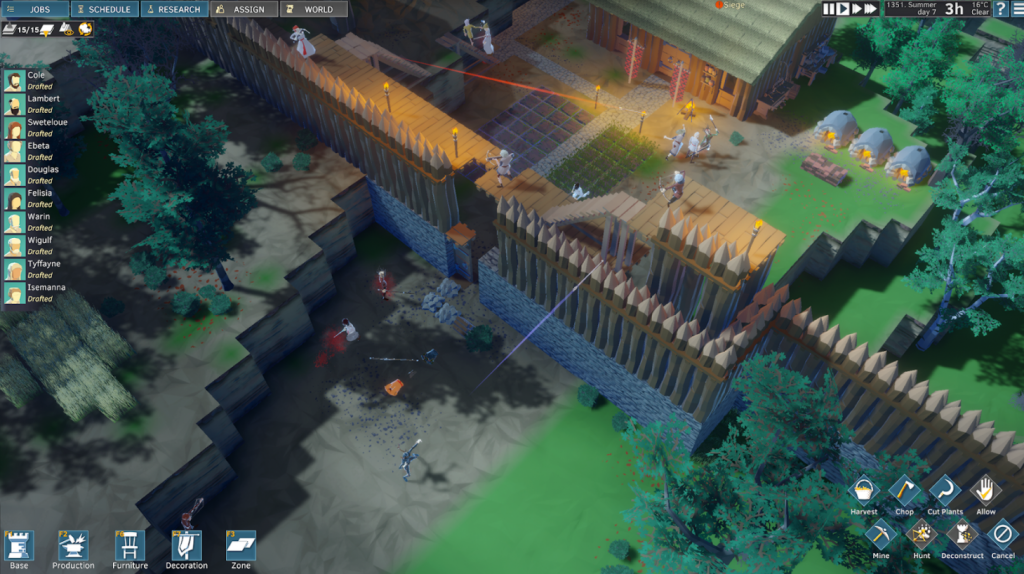 When it comes to the actual building, it’s again really straightforward — just plop down walls and your settlers will build each wall segment individually. At first, you only need a small room to provide shelter, but over time you can build whole forts or compounds out of wood, stone, and more. I’m hoping you can eventually build a castle, because why not? You can surround your compound with spikes and traps to protect your farms, fields, and homes within the walls, post archers on high scaffolds, and fend off any attackers with ease as long as you have the settler power and the resources. For how easy everything feels to grasp, it is pretty remarkable how much you’re able to actually do here.

Although I ran into a bug where anything on an elevated layer of the field turned black, that was really the only issue I experienced, and the dev team keeps a log of all known bugs that they’re currently attacking now. And since I played Version 0.5.8, it’s a given that there are going to be slight but totally fixable issues at this state. I do have the utmost confidence in this team being able to get Going Medieval into tip top shape (honestly Irregular Corporation has yet to disappoint me); in fact, me only running into one cosmetic bug despite the game still being in what is still an Alpha build is a great sign. Here’s to hoping the team experiences smooth sailing in the rest of Going Medieval’s bug-busting, refining, and polishing stages.

Be sure to Wishlist Going Medieval on Steam today!