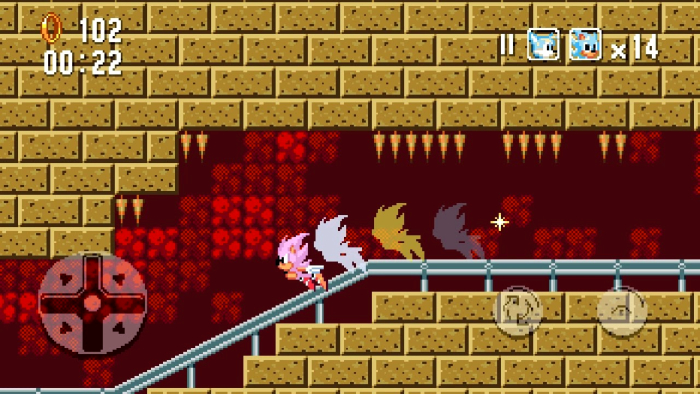 While most gamers acknowledge that the early Sonic The Hedgehog games were great, the 8-bit sub-series often seems to fly under the radar. These titles, made for Sega’s Game Gear and Master System consoles, bore little resemblance to their 16-bit big brothers. Apart from the same basic mechanics, they had different zones, mechanics, and an overall different feel. They deserve recognition in their own right. Fortunately, some fans have addressed this issue by creating Sonic 1 SMS Remake and Sonic 2 SMS Remake.

These downloads are largely faithful to the originals released oh so long ago. However, they do take some creative liberties and introduce new concepts, mainly inspired by recent titles such as Sonic Mania. For example, extra characters join the roster. Now you can have a go as Tails, Knuckles, Mighty, and Ray. Even Amy Rose, Shadow, and Metal Sonic make appearances! Their usual special moves are also present and accounted for. Sonic’s spin dash, super peel-out, and drop dash are all there. Super Sonic’s here, too. An “Encore Mode” like in Sonic Mania has been added. And now there are save slots so you don’t need to start from the beginning each time!

The zones available have also been tweaked. Each game’s respective library is faithfully present, but extras are thrown in, such as “demake” versions of zones from the 16-bit games. It all comes together to make an experience that’s familiar to long-time fans, yet different and fresh.

I haven’t even mentioned the best part. These games are free. That’s right: you can download them right now for the sweet price of zilch. Nada. Better still, each game has a mobile port! Now you can play these on the go, without the use of any sort of dodgy emulation software. They are unfortunately Android-only, though.

Owners of GameMaker Studio may download the engine used and have a stab at making their own games! Several other fan projects have already been realized.

Download everything from the official page. Check out the example gameplay video below. If you’ve tried it, let us know your thoughts in the comments!