Hello and welcome to Nailed It! — I mean, Friday Night Bytes! This week’s edition was inspired by the hit Netflix series, Nailed It! And I think we really stuck to the theme exceptionally well. This week’s comely comestibles are: Monster Cake and Dubious Food, from The Unofficial Legend of Zelda Cookbook by Aimee Wood. Since this week’s format is a little different, I won’t be giving my usual scores for the food. This time, it’s entirely for fun.

“It is said once you have a taste of this cake, you’ll never forget its sweetness.” – In-game description from The Legend of Zelda: Breath of the Wild.

In Breath of the Wild, Monster Cake is one of the recipes of the Royal Family of Hyrule, and can be found in the Library of Hyrule Castle. In the game, Link can combine Tabantha Wheat, Goat Butter, Cane Sugar, and Monster Extract to make a Monster Cake. When consumed, the Monster Cake will restore some of Link’s heart containers.

In real life, the Monster Cake is… somewhat more complicated. The cake itself is pretty simple — it’s really just a basic chocolate cake base, which was easy enough. But then came the decorations. The horns are made from homemade white modeling chocolate, mixed with “Monster Extract” from the cookbook, which is just strained berry juice. The first attempt at making the modeling chocolate was a disaster to say the least. The directions say to add the coloring after you’ve melted the chocolate and combined it with the corn syrup. Thinking myself better than the actual author of an actual cookbook, I decided to add the extract after the melting. I thought doing so would give it a nice uniform color, rather than try to mix it in by kneading it in later.

Boy, was I wrong. 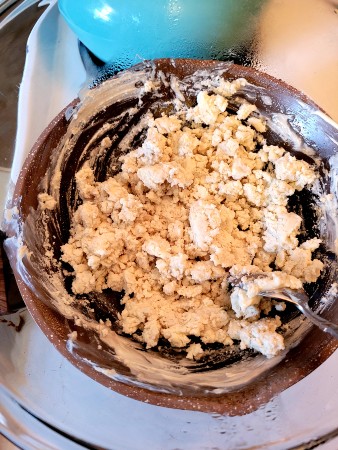 As you can see, I think I made feta. Unappealing grey feta. Humbled by my classic Nailed It! mistake, I decided to follow the directions to the letter. This time, the results went in the complete opposite direction. Instead of a horribly crumbly dry and somewhat rancid mess, I got… goop. Disgusting, grey goop. 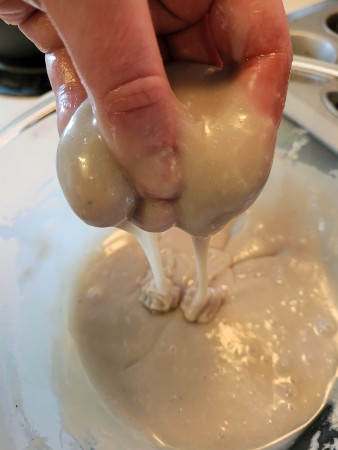 Since the goop wasn’t remotely solid and couldn’t be used to make anything, I tried for lucky number three. This time, I left out the Monster Extract, and voila, it came together! I wouldn’t say it was great, but it was serviceable. It was also really gross working with it, because all the milkfats came squish-squelching out of the solid parts. In the picture below, you can see my attempts and my husband’s. My husband’s horns and wrench-like bone are on top, and my horns and unfortunately excessively phallic bone are below. (Side note: the bone is for the Dubious Food, but we made them all at the same time). 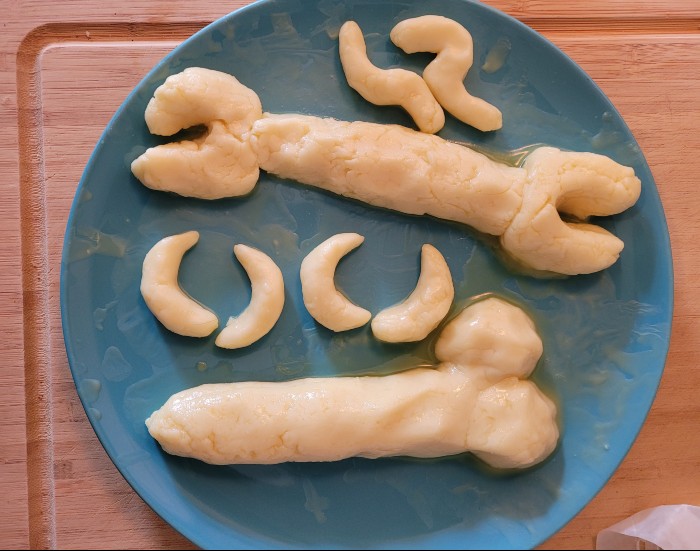 They’re not pretty. Let’s just be honest with ourselves. Nothing on that plate is pretty. And the Monster Cake bases are at least… normal looking, if unfortunately small. We then assembled our cupcakes and frosting, which promptly began to melt into brown slop. It was a rush to get them on the plate – my two on the left, my husband’s on the right.

I mean, I think our Monster Cake turned out… okay-adjacent. Taste-wise, they were not nearly so okay-adjacent. They were kinda gross. There wasn’t nearly enough chocolate flavoring in the cake itself, and the frosting was horribly sweet. I could feel it stripping the enamel off my teeth with the two small bites I took. They were, however, super fun to make, so I think that makes up for it — at least a little bit. 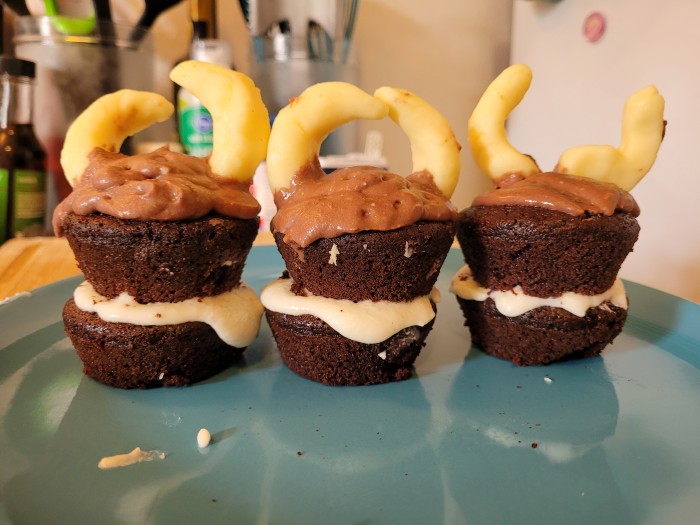 The Husband’s Opinion: “The cake was kind of bland. Not bad, but just… not good, either. Honestly, it kind of tasted like something you’d buy at a supermarket bakery. Just kind of a one-note sweet flavor. The frosting is just waaaaaay too sweet. Even a little bit is overwhelming. It was messy-fun to assemble, though! They had a cute monster-y look, which was fun. Assembling the horns is extremely unpleasant. It’s somehow greasy and dry and sticky all at the same time, and it sounds like a boot being pulled from the mud when you try to knead it. It’s so gross. But gross-fun! Definitely fits the theme.”

“It’s too gross to even look at. A bizarre smell issues forth from this heap. Eating it won’t hurt you, though… probably.” – In-game description from The Legend of Zelda: Breath of the Wild.

Dubious Food. Hoo boy. Where to begin. The description is pretty gross, and yet, also accurate. In the game, it’s the unfortunate consequence of cooking with incompatible items. It will restore some of Link’s hearts, but it’ll definitely take a piece of his soul in the process.

Making the Dubious Food in real life is significantly more pleasant. It’s essentially a chia pudding with matcha and blackberries. The hardest part is getting the matcha to mix in with the chia goop. Simply let the chia glop congeal in the fridge for several hours, and then plop it on a plate over your white chocolate bone. Remember those unfortunate chocolate bones my husband and I made? Here’s a refresher:

See, I thought I was being genius making my unfortunately-shaped bone. I thought that I could get away with just making one end of the bone-knobbins (I’m not an anatomist, so I don’t know the actual names), and it worked in the finished product. But it was borderline obscene (okay, maybe actually obscene) during the production stage. 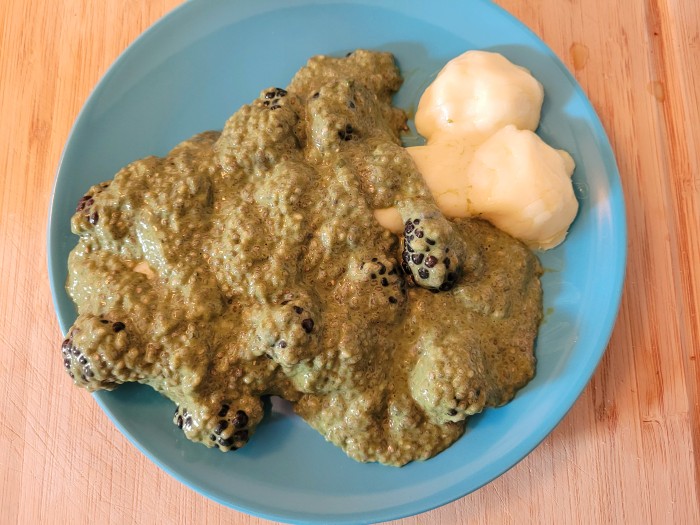 And here’s my husband’s: 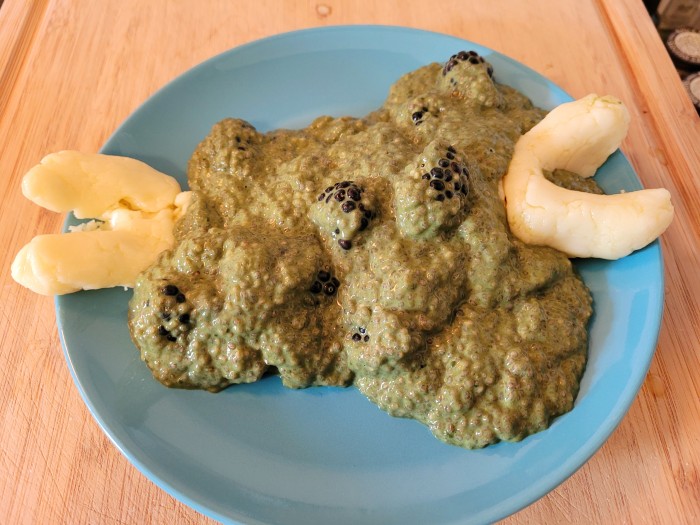 It looks disgusting. Some might even say vile. And those people would not be wrong. It looks like what poor Link left behind in a hole in the woods after eating the Rock Hard Food I made a few weeks ago. It’s almost hard to eat it’s so ugly. But it actually tastes really good! Matcha, which is just ground up green tea leaves, and blackberry go together stupidly well. The only thing I’d recommend changing is adding a little honey for sweetness if you use unsweetened almond milk like I did. I’ll actually be making this again for breakfast. My husband, on the other hand, had some… opinions. And I really wish I would have captured the faces he made in a picture or two.

The Husband’s Opinion: “It definitely looks the part. It is a thick, congealed, disgusting mess. It pretty much looks exactly like it tastes. It’s somehow bitter but kind of bland, and also kind of chew and crunchy. And, uh, it’s gross. It’s just gross. I think I can still taste it. It’s wildly unpleasant. So, I guess that means… success?”

That’s it for this week’s Friday Night Bytes! I’ll be taking next week off, but I’ll be back the following week with a four course dinner from The Unofficial Legend of Zelda Cookbook. In the meantime, share your own Nailed It! moments, please! I’d love to hear from y’all. 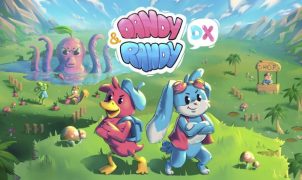 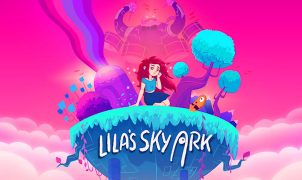