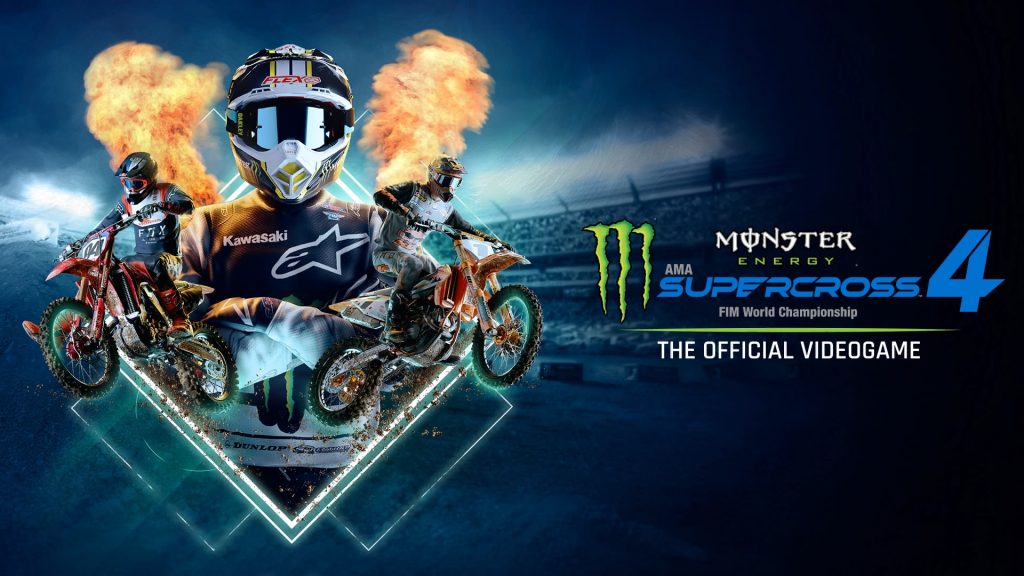 You know, it doesn’t feel like it was that long ago that I wrote my preview for Monster Energy Supercross – The Official Videogame 4. And I guess that it’s because it wasn’t (it would be kind of weird if it was, I guess). I remember it being good for what it was, but couldn’t help feeling as though it were missing something. Something like, say, oh, a career mode? And, now that I’ve finally been given the ability to access said missing piece, I can say that, while I wasn’t 100% about the outcome, things turned out almost exactly how I expected them to—and that’s good, considering I had pretty high hopes for the parts of this game that I wasn’t able to access before.

If you asked me to describe this game to you in 10 seconds, I’d say that there are two things about it that stand out to me the most, and they go hand-in-hand with one another. The first thing is that this game appears (and I say “appears” because I am by no means a supercross expert)  to be very competent when it comes to supercross itself. The second is that it immediately expects this level of competence from its players. That might not might make sense right now, but it’s something to keep in mind as we continue through the review—so continue we shall! 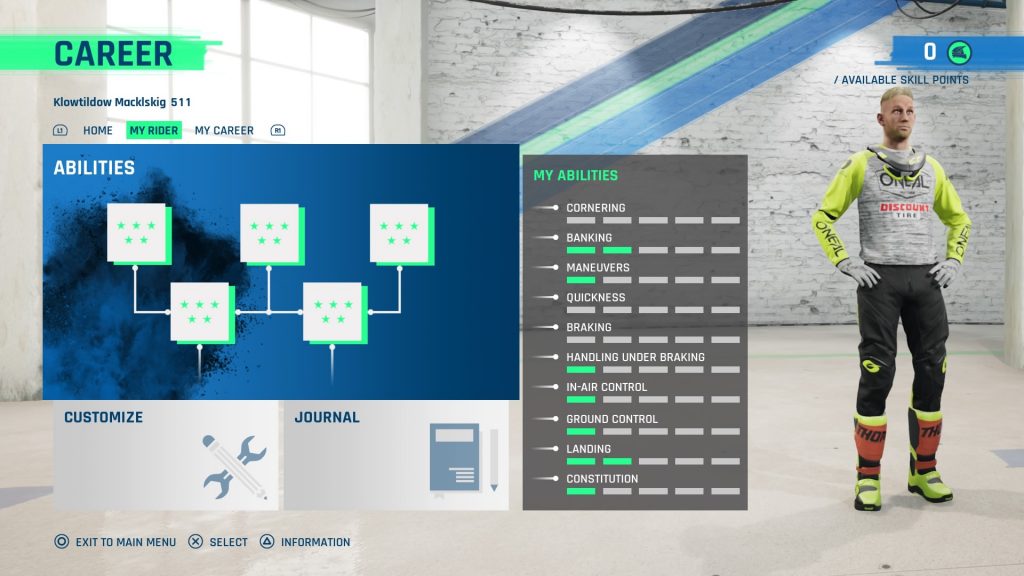 I never thought I’d be using a skill tree in a supercross racing game, but here we are!

Let’s start out this review by honing in on this game’s bread butter—its Career Mode. Okay, so, I guess racing is technically its bread and butter, but you get what I mean. Anyway, while Career Mode isn’t technically the first thing that you need to do in this game, it’s most likely where you’ll be spending the bulk of your time (at least for a while). Like with any other racing game Career Mode, the objective is rather simple—to strut (er, bike?) your stuff out on the track in hopes of winning fame and fortune! Career Mode itself is divided into three different categories—Futures, Rookie, and Pro—with each sporting tougher competition, more races, and the possibility for better rewards.

While it’s nice that the basics are all there, what really impressed me was that Monster Energy Supercross 4 really seemed to go out of its way to put in as many bells and whistles as possible. Rather than just throwing the player into multiple races back-to-back, you’re brought to a hub menu in between races. It’s here that you’re not only able to do the basics like look at player stats and perform maintenance on your bike (provided you have the cash, of course), but you can also train your character through a number of different mini-games. While difficult, performing well in these mini-games nets you points that you can use on what this game has literally dubbed as a Skill Tree. 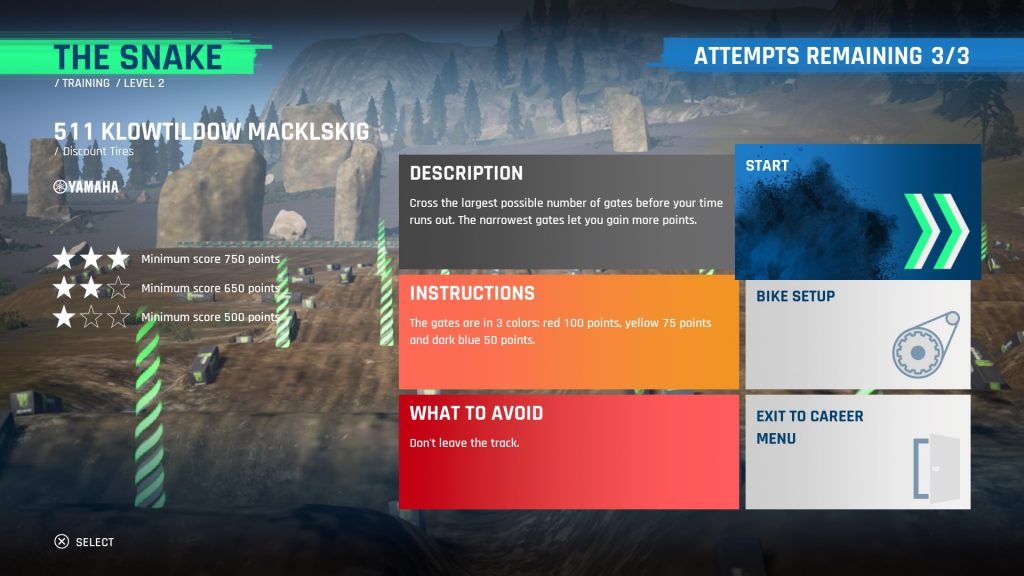 Don’t mind me, I’m just going to grind a little before the next race.

Additionally, should you manage to impress the crowd during a race, you’ll occasionally be invited to special events where you’re challenged with performing various objectives on the track in order to win more cash. I know that extras aren’t necessarily the heart and soul of a game like this, but I do feel that, especially when it comes to maintaining a series, it’s important to keep adding mechanics that are both beneficial and enjoyable while still remaining nonintrusive—which all of these absolutely are. 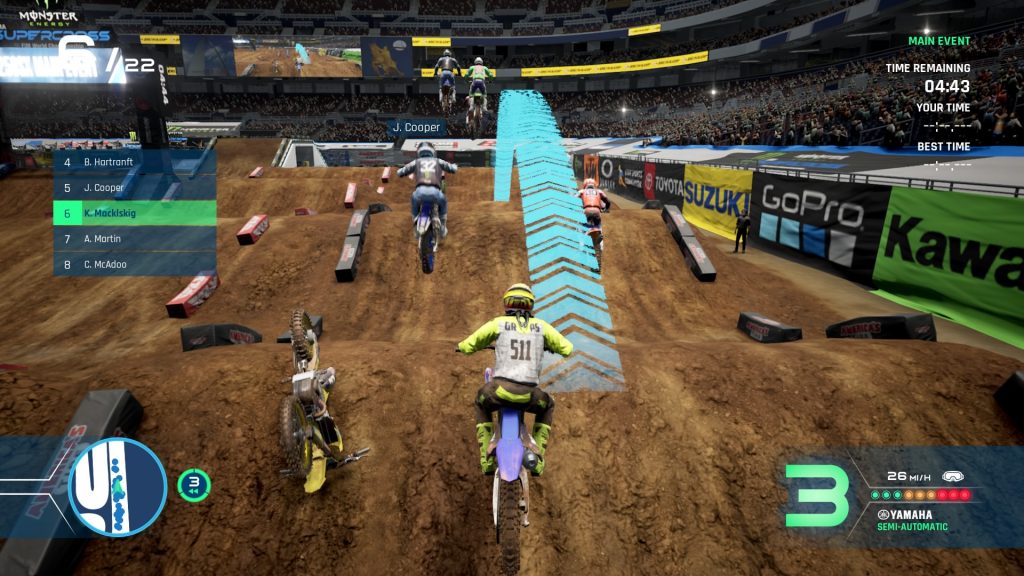 Not sure about those jumps? Turn on Dynamic Flow! (The guy next to me sure didn’t!)

Before I begin this section of the review, I’d like to make it clear that, while I’m no stranger to racing games, I’m a complete novice to the world of supercross itself. With Monster Energy Supercross 4 being a racing game itself, you might not think that that would be a huge deal. But, surprisingly, it kind of is. Actually, scratch that, it really is. When it comes to actual racing, this game, for better or worse, seems to be very particular about how its players handle things. Sure, the drifting techniques that you picked up in Mario Kart will come in handy here, but that’s just the tip of the iceberg. In order to come out on top—or to just not come in last place—you’ve got to know supercross basics pretty well. This, of course, means things like weight distribution, bike setup (your bike is completely customizable, after all), acceleration technique, the proper way to jump, and so on.

I’m sad to say that, when it comes to the bare-bones basics of supercross, Monster Energy Supercross 4 doesn’t really tell you anything. You’re either expected to know it already or go learn it. However, once you’re comfortable, this game is actually quite accommodating. There’s a myriad of options available to help players tweak the game settings to their liking. From the ability to have your character auto-adjust to the “Dynamic Flow” option which literally has giant blue arrows telling you how to optimally make your jumps, Monster Energy Supercross 4 may not be all that friendly in terms of welcoming you into the fold, but, once you’re in, the game is plenty accommodating. 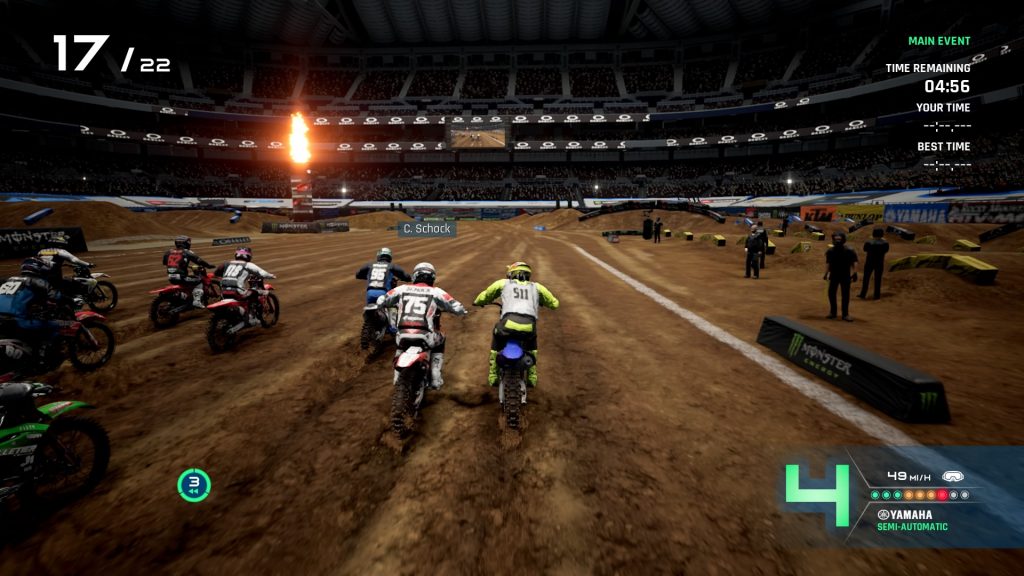 I call this part the “speed trap” because I always end up going too fast and crashing into a wall. Maybe I’ll learn someday!

Things are, admittedly, a little less exciting when examining the courses themselves. This isn’t really anything to be upset about, though. Because Monster Energy Supercross 4 emulates a more realistic style of racing, the courses are also created in a realistic way. If you’re into supercross, or genuinely appreciate/don’t mind realism, this shouldn’t be an issue at all. However, if you like your racing courses a little more whimsical, just keep in mind that, while this game has plenty of different tracks, they all feel like variations of the same scrunched up, hilly, dirt road (albeit a much more exciting one than normal).

The Spice of Life 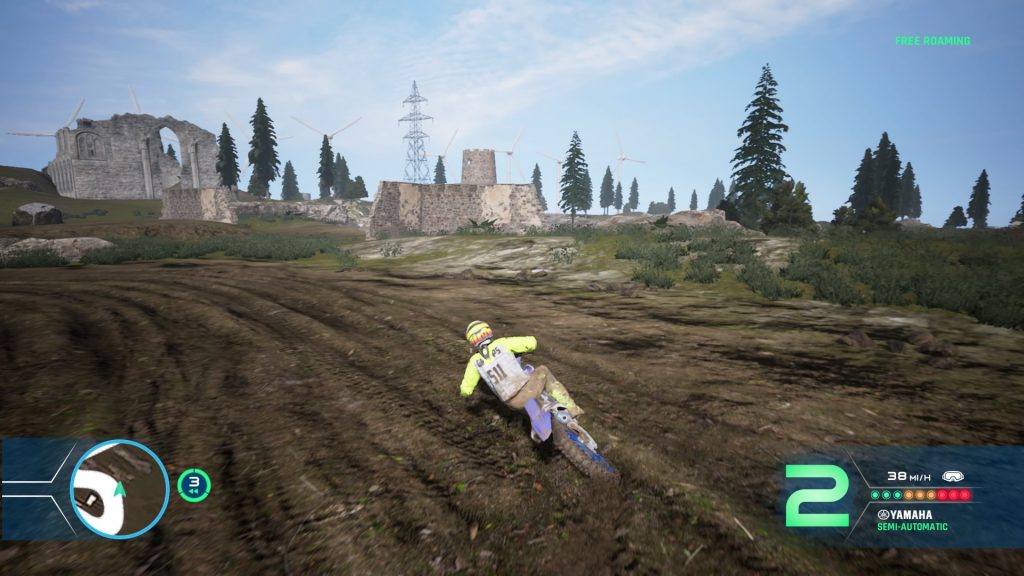 I can’t say that I was expecting to find ancient ruins in a game like this.

To round this review out, let’s focus on the extra modes that Monster Energy Supercross 4 has to offer. And, when it comes to said extras, you’ve actually got quite a few things to choose from. You’ve got your usuals, of course, with things like Time Attack and Championship modes, but, once again (because I totally did this in the preview, too), I’d like to focus on a few of my favorites, the first being the Track Editor Mode. While I can’t claim to have played every racing game out there, track editors really aren’t something that I see too often. And, while I personally can’t claim that I’m all too great at creating courses in this game, it was fun being able to mess around on courses that other people made.

My favorite extra mode, however, was the Compound. A wide-open space featuring various mini-games and even a smattering of hidden collectibles, the Compound was probably one of my favorite things to mess around in. Once again echoing the same sentiment that I did in my preview, a lot of this boiled down to the fact that it gave me the opportunity to do something that I couldn’t do anywhere else in this game—practice. Given that Monster Energy Supercross 4 wants you to figure out its finer points, the Compound is a great place to do so and provides you with plenty of room to freely practice. On a less important note, it also provides a nice change of pace from the arenas that you’re constantly biking around in.

This One’s For the Fans

When it comes down to it, Monster Energy Supercross – The Official Videogame 4 is absolutely a game for pre-existing fans—whether casual or hardcore—of supercross. So long as you know a thing or two about the sport, you probably won’t have too much of an issue jumping right into things, and I’m sure that you’ll enjoy all that the game has to offer. Those who don’t know anything about supercross might want to watch out, however. While things are nice and friendly once you understand the basics, you’re in for a pretty rough start if you’re coming in completely green.

Full disclosure: This review is based on a copy of Monster Energy Supercross – The Official Videogame 4 provided by the publisher.