Space Monkeys and Robot Arms. What’s Not to Love?

Couch co-op games, sadly, seem to be increasingly rare these days. Enter Bonkies, from developer Studio Gauntlet. The premise alone is entertaining enough – a bunch of monkeys and other animals in space have to work together to build… stuff. It’s supposedly construction-related, though the things you build are never practical (obviously). Either way, silly as it is, Bonkies is a weirdly entertaining game.

In Space, Can Anyone Hear Bonkies Bonking? 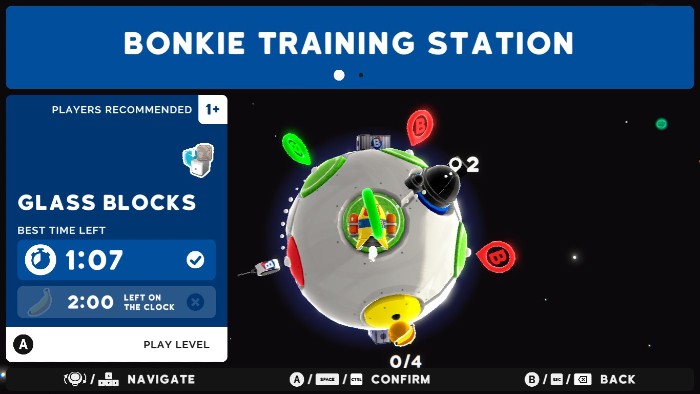 If you’re looking for a local multiplayer game with a story, you’re gonna want to look elsewhere. There’s no story to be found here. Bonkies is a game that doesn’t need one, though. The entertainment comes solely from the gameplay – and from playing with friends. I can say that with confidence, because the game does have a single-player campaign. I gave it a try, and it is hard. And while it’s perfectly okay-ish to play by yourself, the game goes out of its way to let you know it’s more fun with friends. And boy, are they right. 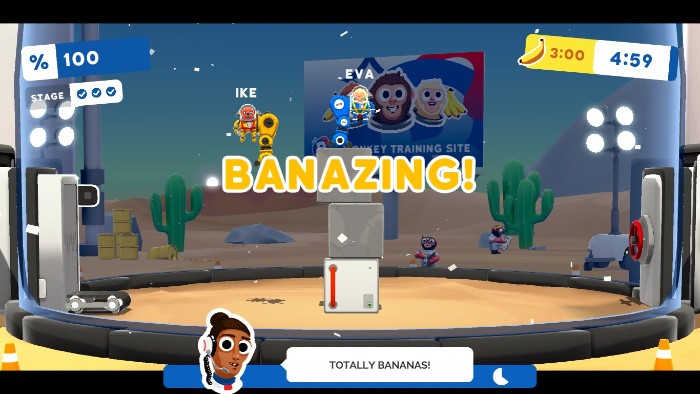 In either single-player or multiplayer mode, the core mechanics of the game remain the same. Select your monkey (though later on, you’ll unlock other animals like koalas and adorable doggos), and you’ll set off in your banana-fueled jetpack. Equipped with a robotic arm, you’ll have to gather various materials in a variety of shapes to fill in the outline. Bonkies starts off nice and slow, easing you into how the game plays, which is nice because the controls can be a little hard to remember. At least, they were for my husband and me.

While you can use your keyboard to play, I definitely recommend using a controller. We hooked up our PS4 controllers, and they worked great with this game. With a controller, you can use the left joystick to fly around in your jetpack, while the X, Circle, Square, and Triangle buttons will center and essentially lock your arm in the corresponding direction. You can then use R or R2 to latch on to an item, and activate your booster pack with L or L2. It sounds pretty simple, but in the heat of the moment, it’s entirely too easy to mix up the controls or forget which button does what, and suddenly you’re tilting a long item in the wrong direction, and it knocks over everything you’ve painstakingly put together. But, honestly, that’s all part of the fun. 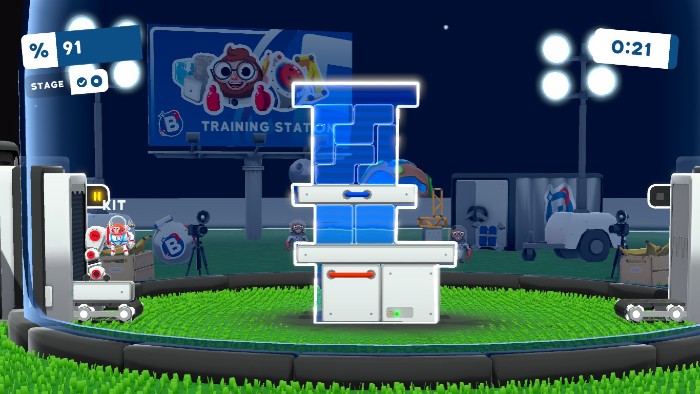 Alright, now that you have an idea of how the game controls, back to the gameplay itself. As you can see from the screenshot above, you’ll be given an outline that you’ll need to fill in. On one or both sides of the screen are conveyor belts that will deliver the items you’ll need to maneuver to fill in the outline. You’ll initially start with simple shapes and materials – mostly squares and rectangles, made of “regular” blocks (I’m not sure what they’re made of, but they’re kind of the default building block). From there, you’ll be introduced to glass items in various shapes. Glass is, as expected, fragile. Drop it too heavily, or drop something heavy atop it with too much force, and it will crack. If it cracks too much, it will separate into smaller pieces, which takes more time to maneuver into place.

Just a Rocket Dog and His Robot Arm 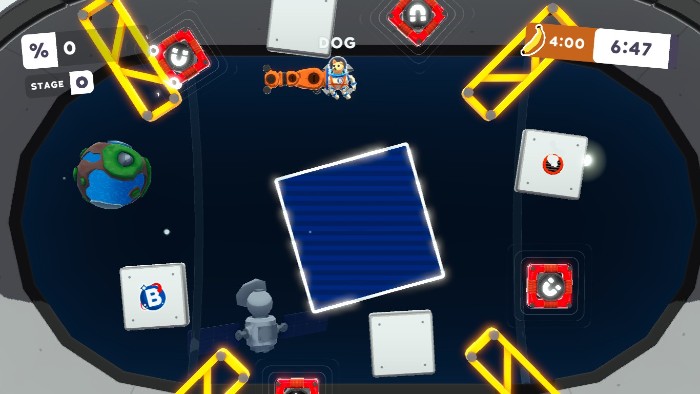 I really liked that the game’s difficulty increases at a comfortable pace, which is good, because Bonkies gets surprisingly difficult. I won’t give away too many of the materials and items that pop up, but you’ll eventually have to start working with rocket blocks to make platforms hover up to fill in the outline and magnets to help hold floating items in place. The game gets delightfully wild and inventive, though as you progress through the game, it’s clear you need more than just two players if you want to enjoy everything.

I thought the way the level selection worked was kinda cute. You start out on Earth, and fly around in your rocket to each stage. Beat enough of them, and you’ll open up the observatory, which is the path to the next world. In this case, you go from the Earth to the Moon, and from the Moon to Mars, and so on. Each stage has a challenge time you can shoot for, and if you manage to beat the level within that time limit, you’ll be rewarded with a banana. Earn enough bananas on a stage, and you’ll unlock additional characters and such. It adds another layer of difficulty to the game, and it was surprisingly rewarding to manage to beat the time now and then.

And that’s pretty much it! Bonkies is a solid multiplayer game. It’s goofy, it’s silly, it’s challenging, and most importantly, it’s fun. Really, the only criticism I can come up with for the game is that it’s not very fun single-player, but in fairness, it’s not really meant to be. So if you’re looking for a couch co-op game to casually play with your friends, Bonkies is an excellent choice.