As a big fan of visual novels, I was quite excited at the prospect of getting to play Dry Drowning. Developed by Studio V, Dry Drowning has a perfectly dark, dreary, dystopian setting, and it struck me as a kind of Phoenix Wright-noir. Which, minus the courtroom drama, it’s not that far off. If Phoenix dropped a ton of acid and saw nightmarish masks on people who are lying, that is. 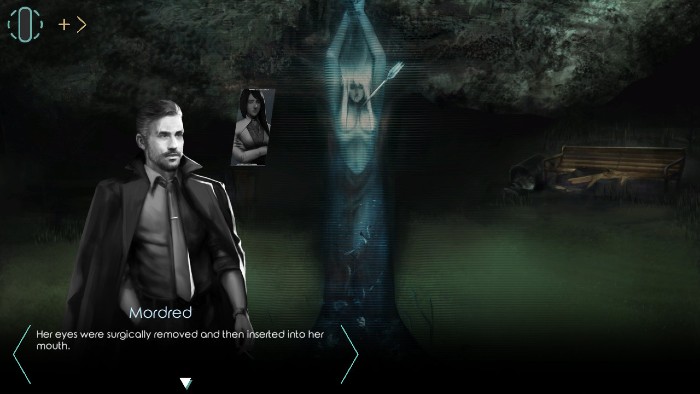 Dry Drowning is set in the futuristic city-state of Nova Polemos. The story follows two detectives, Mordred Foley and Hera Kairis. Still haunted by the memories of a case from six years ago, Mordred and Hera are forced to relive the darkest days of their lives. A serial killer known as Pandora has returned to the city, leaving a trail of carefully staged corpses in their wake. Each murder is based on a Greek myth, including Apollo and Daphne, Icarus, and more.

Dry Drowning is, as should be expected, heavy on the text, which is a good thing! The writing is engaging, the dialogue deliciously gritty and intense at times, with some expert plot twists. The story is very heavy on politics, so if you’re burnt out on politics as of late, this is a game you may want to put on the backburner. 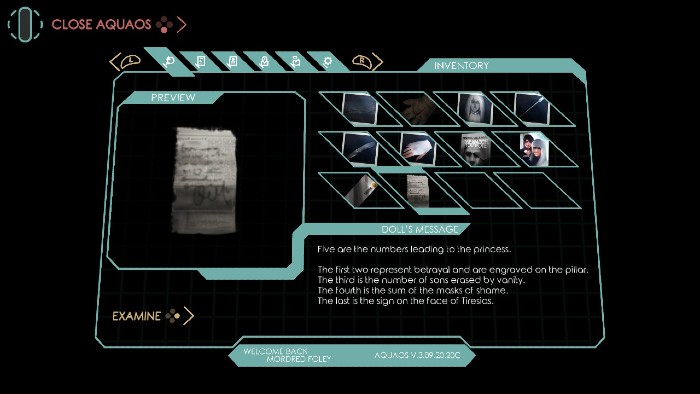 Much of the game will be spent speaking with various characters or suspects around the city and gathering evidence. While at first I was annoyed that the game occasionally gives you evidence you’ll never use, I actually realized it made it more challenging that way, which I ended up appreciating because it actually deepens the game’s lore some. Unlike games like Phoenix Wright, where you’ll painstakingly fit every piece of evidence into its designated spot, Dry Drowning gives you extra evidence that serves no purpose other than to highlight how gruesome some of the murders are.

You can view the evidence you’ve gathered so far, as well as psychological profiles of the people you meet, in the in-game UI, known as the “AquaOS.” This is really where the only “controls” in the game come into play, and there’s honestly not much to say about them. Straightforward, you can open up the UI, poke around, close it, speak to people, or investigate a scene. And that’s pretty much it. 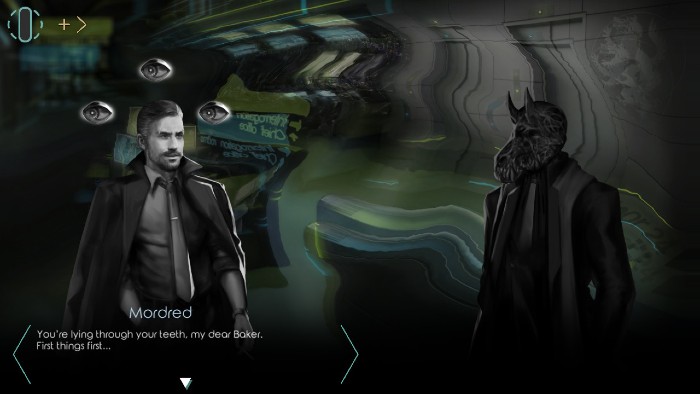 The best investigative tool you’ll have, however, is Mordred himself. When people lie to him, a horrifying, warped animal mask will appear on their faces. Once you have enough evidence, you can confront them, which will trigger the “Living Nightmare” system. When active, you’ll face off against the person and engage in a battle of wits to make them give up whatever info they’re hiding. This was easily one of my favorite parts of the game. The music changes, becoming intensely dramatic, and the background warps and shifts. Three eyes appear above Mordred, representing the three mistakes you can make before you get a game over.

As you push, question, and show evidence, you’ll slowly remove parts of the mask. Like peeling back the layers of an onion, you have to peel back layer after layer of their lies until you expose the truth at the core. Once you do so, the last of the mask will be removed, and they’ll tell you everything you need to know. 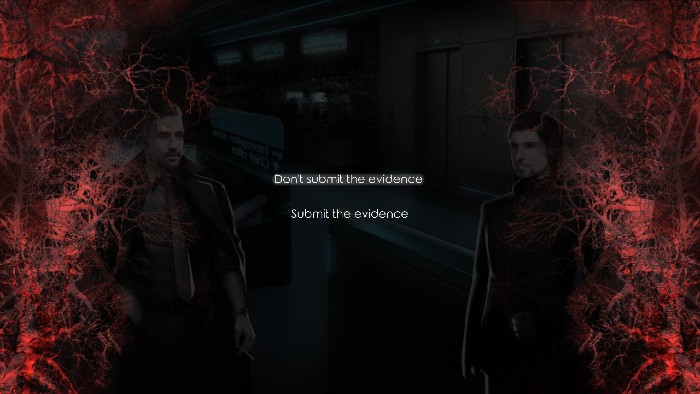 As you progress through the game’s story, you’ll occasionally be presented with two choices. Whichever one you choose will have effects that will continue through the rest of your playthrough. Should you choose to lie to a politician’s wife instead of telling her an uncomfortable truth, you may find that she later lacks the strength needed to face reality. If you’re forced to decide between two lives, they will actually live and die in the story. While the main crimes will still play out the same way (at least from what I’ve seen on two playthroughs so far), the characters you interact with and how they feel about you will change. Overall, I was pleasantly surprised by the difference your choices make in navigating the story.

Style and Substance in Equal Measure 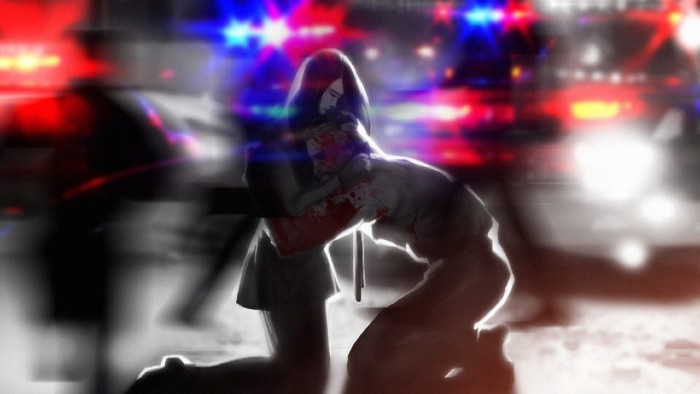 The art style of Dry Drowning is absolutely stunning. While the characters themselves are done in greyscale, the environmental elements are done in color, which offers a really striking contrast. The characters and environments have this great hand-drawn quality to them, with their expressions breathing life into them. I honestly can’t criticize much about the game’s artistic direction – no two places look the same. The feeling is one of constant oppression and dreary, slow-burn dread, which perfectly fits the story.

The music also melds seamlessly with the game’s art. Heavy on the piano and with the occasional melancholy guitar thrown in, the soundtrack really enhances the game’s dark atmosphere. The music also matched the mood of what was happening on-screen, too, at turns dramatic and achingly melancholy.

A Lot of Flair, Little Flaw 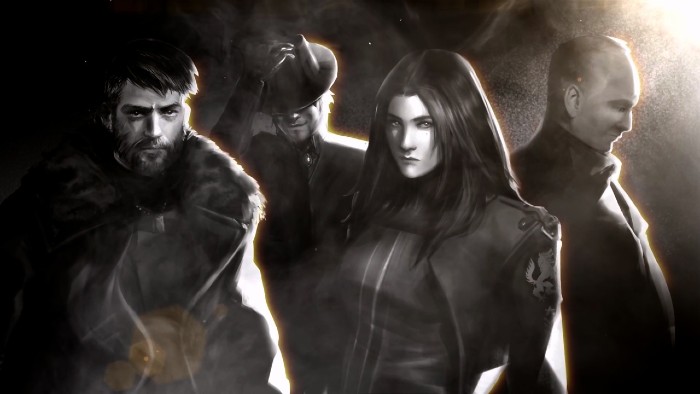 Although my experience with Dry Drowning was largely positive, there were a few flaws with the game. For starters, I can’t really recommend that you play the game on a Switch Lite, like I did. The text is awfully small, and more than once, I had to get the screen uncomfortably close to my admittedly bad eyeballs to read it. Even when I transferred my save data to my docked Switch, in handheld mode, the text was still awfully tiny. The text size was perfectly acceptable on the TV, though. Tied in with the tiny text was the somewhat odd decision to occasionally put white text on a cyan background.

Additionally, the translation could have been improved some. While never game-ruiningly bad, a good translation is especially important for a visual novel. Every now and then, the phrasing was just ever so slightly off, where they picked a word that was technically correct, but didn’t have a pleasant mouthfeel when said aloud. My final complaint is that the game had very few actual puzzles to solve, and the ones it did have were entirely too easy. It would have been better to either add more or have none at all and just stick to investigating.

Overall, I thoroughly enjoyed Dry Drowning. It’s got a lot going for it – excellent writing, a deep, riveting story, and plenty of replayability with branching paths and multiple endings. The few flaws the game does have are more a minor nuisance than any kind of real hindrance. If you’re looking for something Phoenix Wright adjacent, but with a dark, intense slant, I definitely recommend giving Dry Drowning a shot.