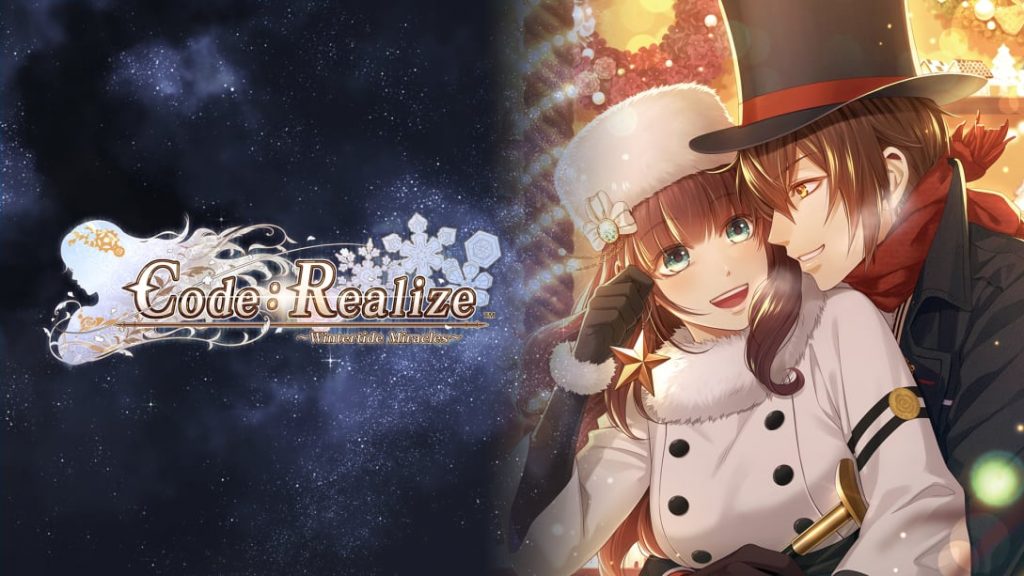 I’ve been a fan of Otomate for a while now. Admittedly, I only stumbled across them because I was given reviews for games like Amnesia: Memories and the Hakuoki series (I’m not exactly in what you’d consider the “core demographic”), but that doesn’t really matter. The point is that I came across Otomate a while back, and I’ve been fond of them ever since. It shouldn’t be a surprise, then, that I’ve wanted to dive into the Code: Realize series for some time. And I was recently given a chance to do that with Code: Realize ~Wintertide Miracles~. Hooray!

…Okay, so, maybe not so much hooray. Being the intelligent person I am, I blindly grabbed Wintertide Miracles, not realizing what it was. Not only is this not the first game in a heavily story-based series (I mean, it’s literally a visual novel), but this is the second—yes, the second—supplemental title, or “fan disc,” meaning that this game consists of nothing but a short batch of content which assumes that you know everything that happened within the past two games. Oops, it looks like I messed up! But a review’s a review, so I looked up all of the basic information regarding Guardian of Rebirth and Future Blessings (which was a total bummer, not going to lie) and dove right in. However, despite my inappropriate and haphazard entry into the series, I still enjoyed Wintertide Miracles quite a bit—and that’s certainly saying something! 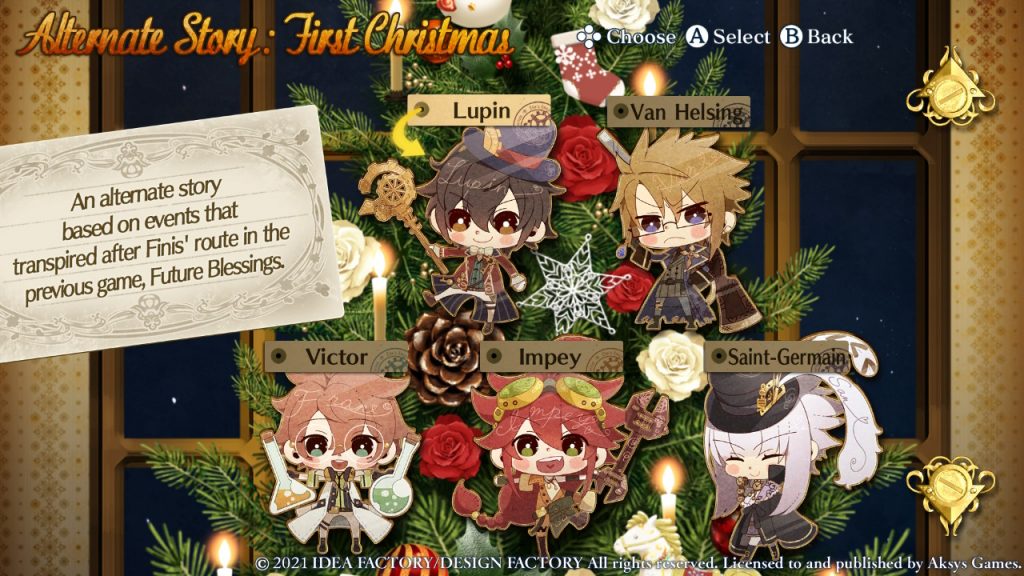 Aw, look at how much fun they’re all having!

As I’ve already said in my long-winded intro section, Wintertide Miracles is the second fan disc in the series. Contrary to the first game, which played out like a regular visual novel, fan discs (and I mean no disrespect, here), are more akin to an “Extra” menu that you’d unlock at the end of a game, except maybe a bit bigger. Or, at least, this one is. Rather than beginning a “main story” as you normally would, Wintertide Miracles takes players to a scenario select screen adorably stylized as a Christmas tree. Is the navigation a little clunky? Yeah, a tiny bit. Does the fact that it’s so adorable make up for this, however? Yes, it absolutely does. 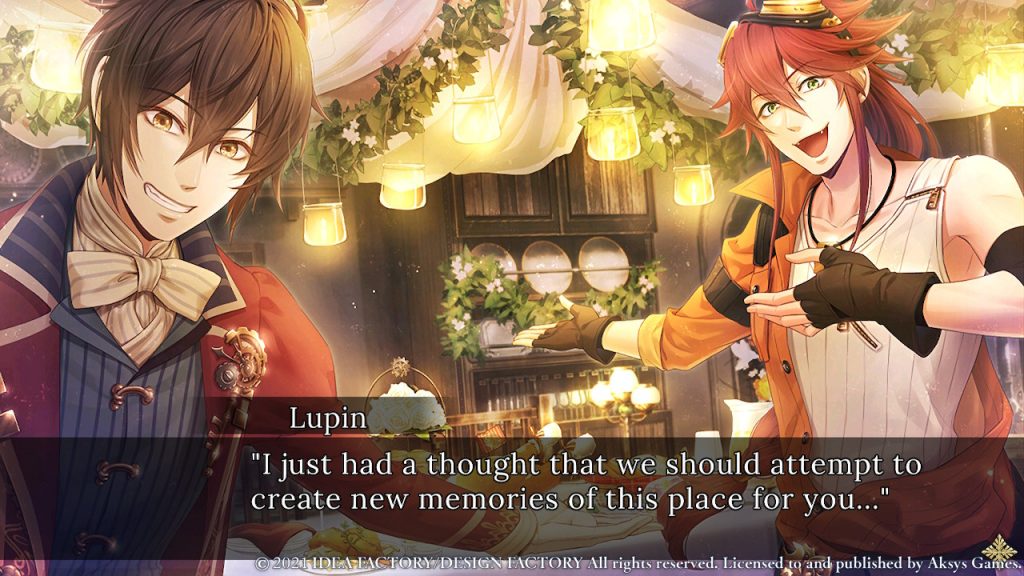 They’re sure to be happy ones with a party like this!

Wintertide Miracles‘ “Scenario Tree,” as I’ve taken to calling it, is divided into three main sections, the first being the “Triangle Date.” True to its name, this is literally a mode wherein Cardia and two gentlemen spent some time together. And, yes, I mean that in the most wholesome way possible. This mode is actually pretty neat because you can pick from any two of the main five bachelors you’d like, with each combination yielding an entirely different result—from Lupin and Lupin traveling with Cardia to her old home, to Saint Germain and Van Helsing quarreling over who gets to dance with her at a ball—and a few bonus scenarios being thrown in for good measures. Because of the extreme variance between each triangle date, none of the scenarios lasts for long (I’d say about 10 or so minutes), but they’re all well-written and enjoyable in their own unique way. 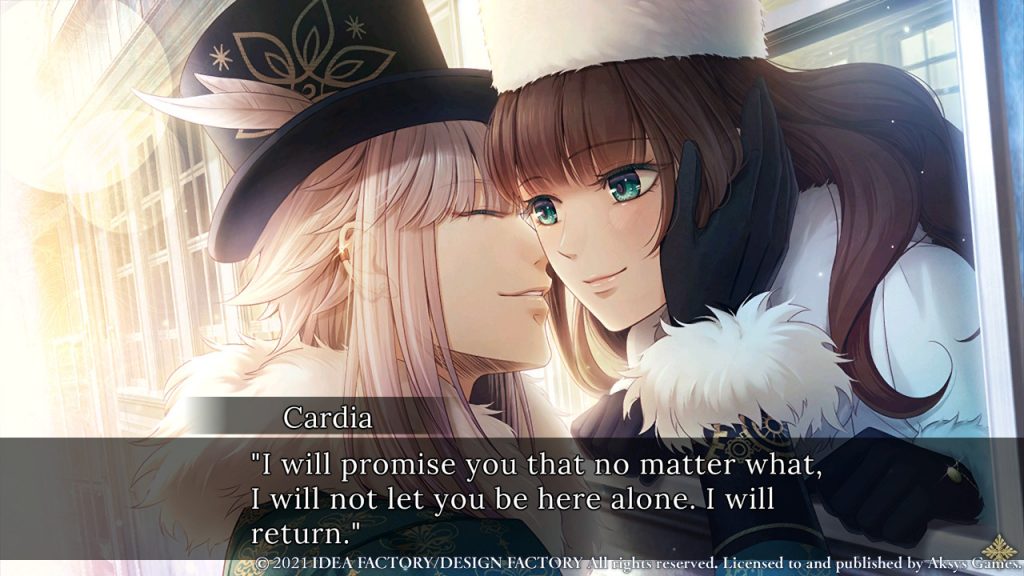 Even if these scenarios didn’t actually happen, it’s still hard for me not to smile at them.

Second on the list of Wintertide Miracles‘ things to do is the “First Christmas” mode and, while that probably doesn’t need much of an explanation, I’m going to give one to you anyway. An alternate story that takes place sometime after Future Blessings‘ Finis route (which kind of seems to be the canon route based on what this game is telling me, but I’m clearly no expert), First Christmas mode lets players choose one of the five main bachelors to experience a whirlwind Christmas romance with.

If you were worried about the fact that Triangle Dates only took about 10 minutes, you can breathe easy, dear reader; First Christmas scenarios are considerably longer. However, do keep in mind that, regardless of which character you pick, these are meant to be one-off “what-if scenarios. They aren’t meant to answer any hard-hitting questions or provide you with a bunch of lore. It’s easier to look at them as short, well-written, feel-good holiday-season stories, because that’s exactly what they are.

Gifts That Last a Lifetime 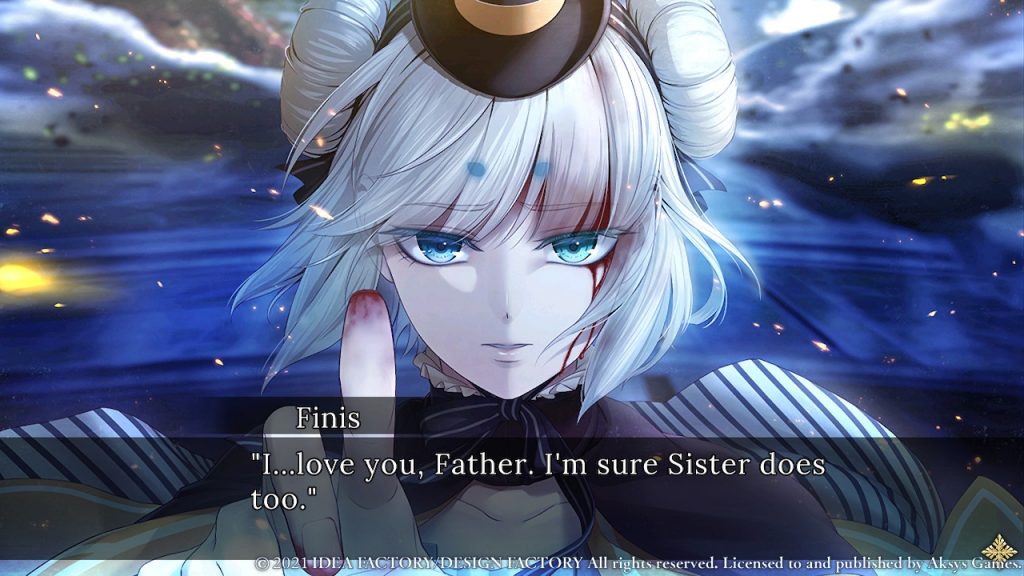 I haven’t even played the main game, and this managed to draw me in.

Last, but certainly not least, we have what is arguably the most content-heavy portion of the game: epilogues! Well, epilogues and a side-story. At the bottom of the Scenario Tree, players are able to play through two unique epilogues featuring Cardia’s brother Finis (which, again, I’m assuming is the canonical one) and Herlock Sholmès. On top of that, players are also treated to an all-new story featuring a character by the name of Cantarella. Unlike with the other stories featured within Wintertide Miracles, however, Cantarella’s story actually occurs alongside that of the original Code: Realize!

While I’m sure my opinion probably isn’t worth a whole lot given my lack of experience, I will say that this portion of the game definitely felt the most impactful. The Cantarella side-story, while not terribly long, definitely felt the most “VN-like” overall and made me really want to dig into the entire series when I have the time. And, while I wasn’t able to see Cardia and Finis’ bond at its very beginning, the writing does an excellent job of conveying just how difficult their—especially Finis’—lives have been despite how young they both are. Again, I know that I shouldn’t have gone into this game without having played at least the first Code: Realize, but I also think there’s something to be said about the fact that Wintertide Miracles‘ writing was good enough to draw me in at this stage despite me knowing next to nothing about the series.

Curled Up and Cozy

So! What have we learned today, dear reader? Well, first of all, Wintertide Miracles is not the first game that you should play in the series. It’s a terrible entry point. But, outside of that, it’s pretty good! So long as you don’t mind your visual novels being less traditional VN and more supplemental in nature, Code: Realize ~Wintertide Miracles~ is a short, sweet, and adorably charming otome title that is sure to keep your heart warm on a cold winter’s day.

Full disclosure: This review is based on a copy of Code: Realize ~Wintertide Miracles~ provided by the publisher.