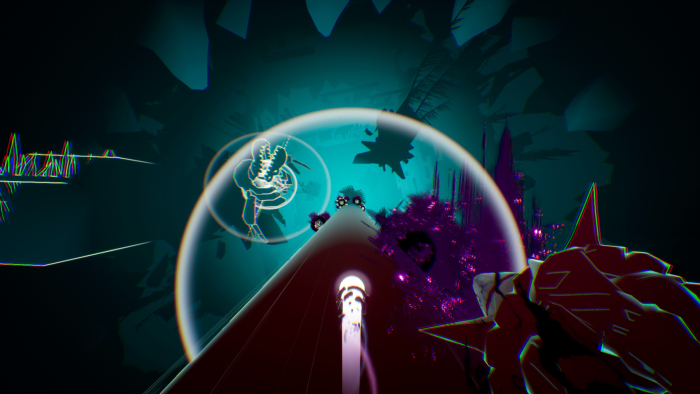 Gunfish Games’ NERVE is a rather esoteric little package. It is, at its core, an avoid-’em-up; Sort of like a third-person BIT.TRIP RUNNER with just a tiny dash of Thumper, but not rhythmic despite the music seemingly suited to just such a genre. This puts NERVE closer in line to other similar games such as BARRIER X and Unpossible.

The game places players in the role of a strange, sperm-like worm… thing… as it hurtles inexorably towards a grim-yet-colorful fate. The actual nature of the white-tailed orb you control is a mystery, as is the game’s actual story apart from a few snippets of vague text. But you can be absolutely sure of one thing: there are nigh-countless obstacles that are trying to put an untimely end to your excursion. But with sharp reflexes and a considerable amount of patience, you’ll eventually pull through. 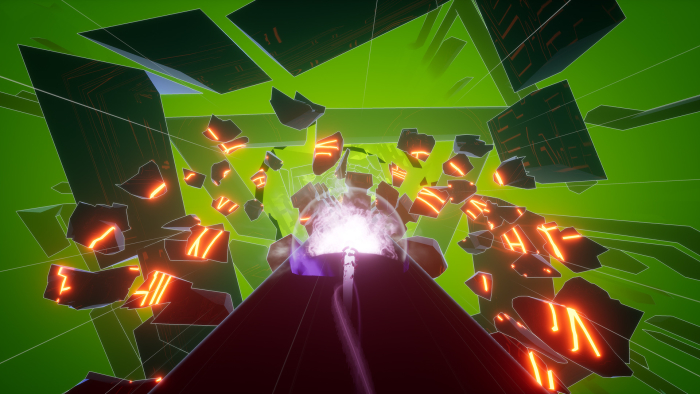 NERVE is gorgeous. Its world is reminiscent of a trippy fever dream, complete with retina-scorching neon colors along many surfaces. For a big chunk of the game, you’re moving along the circumference of a gigantic cylinder. This allows you to navigate with a pseudo-3D plane in mind, and avoid obstacles which could come outwards from any one of the three hundred and sixty possible degrees. Objects phase in and out of existence with nary a moment’s notice. Spires rise teasingly as you approach them, threatening to crush you with your own momentum, but quickly give way as if merely trolling.

The game is a selection of different courses, each stylistically different from the last but all sharing the same common theme of moving at breakneck speeds. Tracks are divided into smaller, more bite-sized parts – chapters – in lieu of longer courses with checkpoints. Instead, these are themselves divided again into sections. This follows a very similar schtick to games like Super Meat Boy, which have very small, quick bursts of intense difficulty that seldom get too frustrating because they’re so brief.

This is aided by the fact that the game does give players a better chance of avoiding its soul-crushing obstacles. At any time, you may slow down the action somewhat to make it more obtainable for more frazzled reflexes. On the opposite end of the spectrum, you may also initiate a burst of extra speed, very similar to the nitrous mechanics utilized in so many racing games. Of course, this comes with a price: you’ll get a lower score the longer you take, so you’re actually encouraged to use the slow mechanic not at all, and the speed mechanic as often as possible. You’ll have to decide between progress and taking greater risks, but honestly, the game is nowhere nearly as exciting if you play it cautiously.

Tingling in the NERVE endings 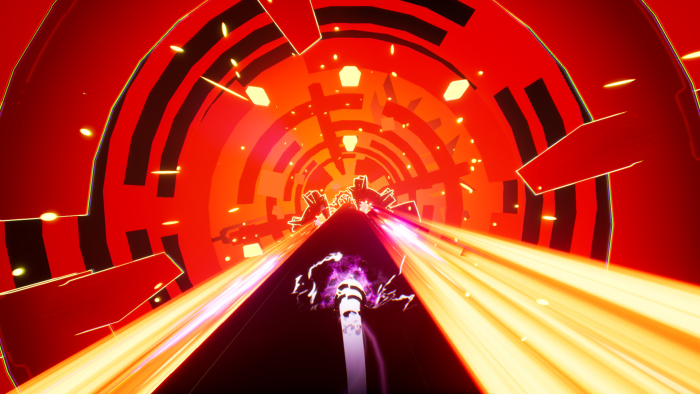 Other abilities are thrown into the mix. One such example is breaking through certain walls, marked with neon, glowing cracks. At the right time, you can bust through said cracks instead of meeting an untimely end. But likewise, dodge at the wrong time and you miss the point entirely; if not the obstacles. Also, it’s not uncommon to get some terrible cases of the “juggles”; that is, you’ll mean to break but muscle memory instead makes you press the break button, or you’ll boost yourself instead of slowing down. When you’re my age you’ll find you do this more often than not. It’s tempting to say this sort of game is better suited to those of us younger than 25 and less prone to neural degeneration, but it’s full of great fun if you’re willing to accept it on its own terms.

So what’s an adrenaline junkie to do? Stick with it. Learn the layouts of each section. Commit it to memory. Learn it by rote if need be. Because, like it or not, you’re gonna be dying a lot. Trial and error is the way things get done around these parts. But what makes NERVE so endearing is that it possesses that quintessential quality of the best arcade games: one more try. You’ll find yourself saying that a lot. One more try and you should nail that section, or dodge that spire, or be extra cocky in your speed bursts in order to shave off some last delicate milliseconds and obtain that ever-elusive personal best.

NERVE is a great little blast if you enjoy little bursts of fun. It’s also a good time if you commit more effort and experience to get good. Either way, if you’re up for a new adrenaline rush with tons of bright colors and a brilliant electronic soundtrack, then NERVE needs to race to the very top of your new gaming list. Great fun all around! You may find it on it’s official Steam page here. If you’ve played it, let us know how you feel in the comments section below.

Full disclosure: This review is based on a Steam key for Skul: The Hero Slayer provided for Hey Poor Player by the game’s publisher. 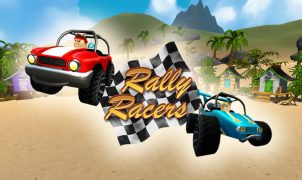 Rally Racers deserves a medal for trying its best I feel sorry for 90% of Arcade Racing games that come out. It isn’t easy living in a post-Mario Kart…