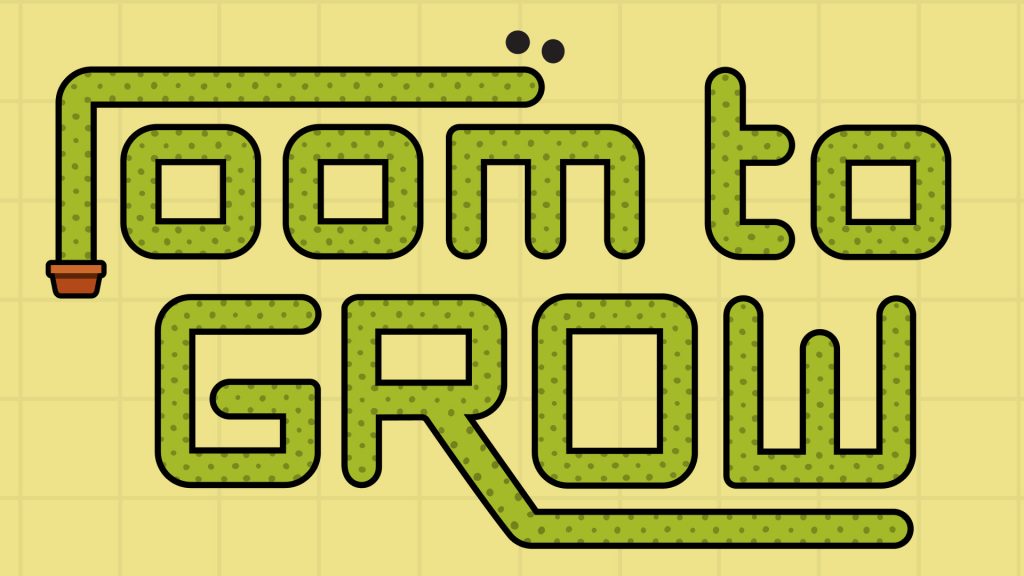 I have a special relationship with the puzzle genre. No other game genre makes me feel like I’m both the dumbest and smartest person alive. Part of that is inherent to the genre. Most puzzle games feature simplistic gameplay. The kicker is that those simple mechanics are used in fascinating ways that I frequently find unfathomable. Puzzles lord their secret designs over me while I stare, dumbfounded, at the screen. That’s what makes it so rewarding to beat a puzzle. Not only did I solve it, I avenged my seemingly fragile self-esteem. It’s definitely a win-win situation. Redemption and progress! 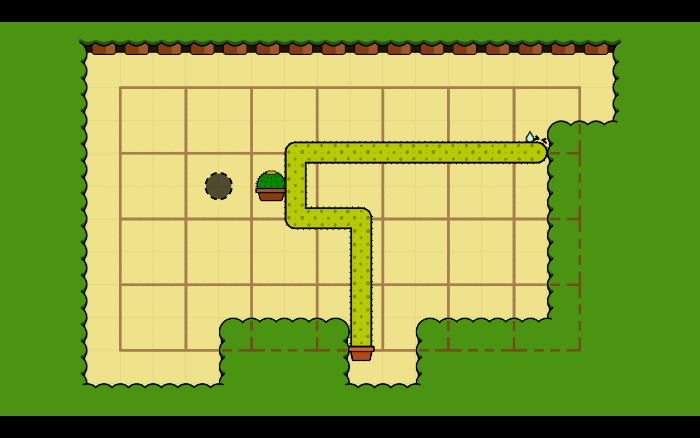 Room to Grow is a perfect example of what I’ve just described. Its mechanics are simple: using the arrow keys, you grow a cactus around the screen and push other cacti into holes in the ground so that they can grow. The goal of each level is to use your cactus to plant all of the other cacti. That’s literally it.

And yet, using just that mechanic, Room to Grow is an incredibly clever puzzler. Aside from the first few levels, the answer is never just to push the other cacti into the ground. You have to use your cactus’s body to indirectly push them into their proper locations. This is accomplished by pushing against specific parts of the environment, which essentially causes you to grow backward. It shifts your entire cactus in the opposite direction.

Room to Grow is played on a grid. Your cactus moves one segment at a time. The only movement restriction is you can’t double back or cross over your own body. The walls will also box you in as your cactus gets larger. Fortunately, you can just press “Z” to undo moves or “R” to restart. There’s no penalty for doing either. There’s also no time limit or action elements. The only way to fail is to not beat the level. You can even skip levels as necessary, and the overworld has branching paths, so you usually have options.

All Hail the Mighty Cactus! 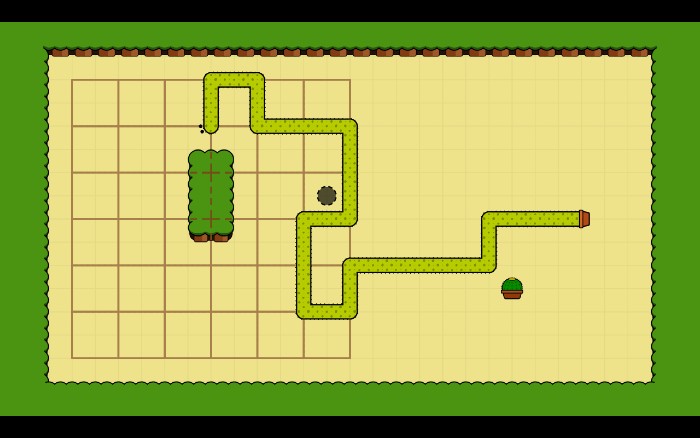 There are several complications that are gradually introduced. First, you frequently need to plant multiple cacti. They don’t have to be planted at the same time, but you can also inadvertently dig them up or squish them. Cacti can also be pushed across gaps, even though you can’t directly cross one yourself. That means you’ll have to figure out how to push yourself across it.

Some levels also incorporate areas without the grid. While your cactus is restricted to the grid, the other cacti are not. You can’t move directly into such an area because there’s no grid, but you can push yourself into it. This means you need to figure out how to push yourself in such a way that you can grab any cacti that are off the grid. You have to plan out how to not only reach the cacti but also how to push yourself back. This becomes even more complicated when you have multiple cacti to reach that aren’t near each other.

Another variable to consider is what I’m going to call a trench. It’s represented by a bolded line. If your cactus touches either end of a trench, it immediately moves the trench’s entire length. What happens if you touch a trench’s corner or middle segment? Your cactus splits into two cacti, both of which can be moved independently. You switch between the two heads by pressing “X”. All the same rules apply. The only additional consideration is that if you push one of the heads off the grid, you can’t move it until it’s on the grid again.

Is it Cacti or Cactuses? 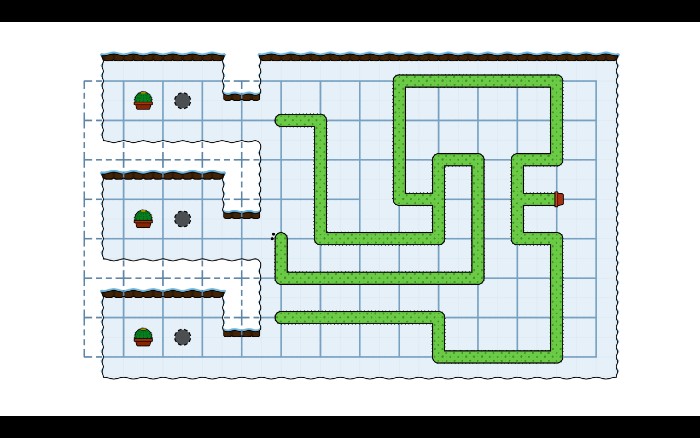 If that doesn’t sound complicated enough, then consider what might happen if the squares in the grid aren’t all the same size. Until the last world, all the squares in the grid are 2×2. The addition of 1×2 and 2×3 areas, for example, directly influences your pushing distance. I started to struggle at this point. Your cactus always goes to the next line when it moves, but that’s not necessarily true of the other cacti, depending on the surrounding areas. I had trouble determining exactly how far I would push my cactus or the other cacti. A brief tutorial covering this would have been helpful.

And that’s not all. The last world also includes levels designed on angled grids. Your cactus still acts the same, but the other cacti are pushed at the angle you touch them, regardless of the surrounding lines. These angled grids also include polygons that will quickly contort your cactus. The final levels will definitely push you to your breaking point.

And, especially in the later levels, you’ll do all of that at the same time.

This is a Prickly Position 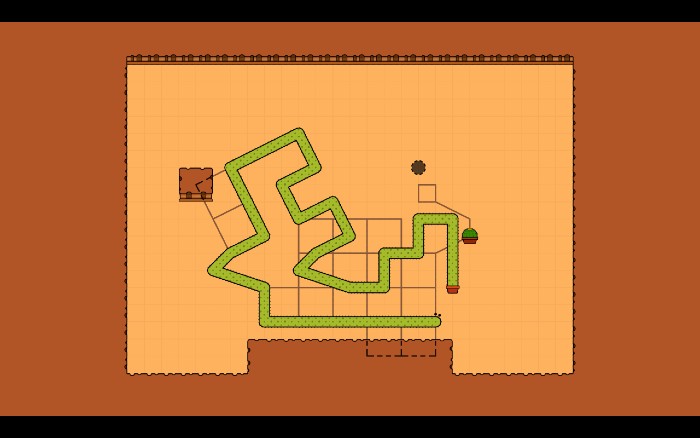 Room to Grow is a forgiving game, but it also becomes incredibly complicated. You can skip any level you want at any time, but it would have been nice to have a hint system. It’s nice that I can skip levels when I get frustrated, but I still want to beat those levels. I once stared at one of the later levels for a half an hour and just could not figure it out. It’s times like those that a little help would have been great.

I know I’m basically asking to cheat, but the levels are so cleverly designed that it’s satisfying to watch it all come together. More than once I found myself saying out loud, “I never would have thought about that!” when I was lucky enough to stumble across the solution to an especially difficult puzzle. Again, it gives me that unique feeling. I feel dumb for not being able to solve it, but when I do (by luck or my own design), I’m impressed by it. I want to see it all even if I can’t do it myself.

Much like its mechanics, Room to Grow sports a simple visual aesthetic. There’s not much to see, which is great because you won’t be looking at the environment anyway. The soundtrack deserves special mention, though. The various drums, xylophone, and bleep-bloops call to mind Animal Crossing. It’s simultaneously engaging but relaxing. It’s easy to slip into a zen-like state while you’re listening to it and trying to puzzle out an answer. I actually found myself humming it when I wasn’t playing.

With more than one hundred levels and a gradual increase in complexity, Room to Grow will definitely keep you busy and satisfy that puzzling itch. A hint system of some kind would be a nice touch to help keep those frustrating moments at bay. It’s a minor complaint for this well-designed puzzler, though. Help me feel smart—or at least a little less dumb—about it. 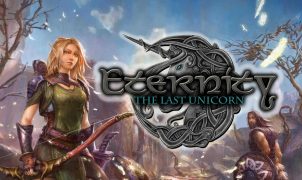 An Eternity of Frustration     It’s been a while since I’ve played a game this unintentionally frustrating. I know that probably isn’t the most encouraging way to start…