When Style and Substance Meet 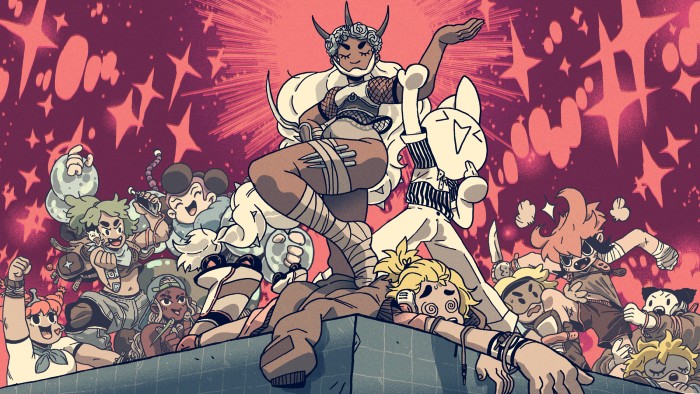 No, Bravery Network Online isn’t the latest Cartoon Network show, though it certainly looks like it could be. Developed by Gloam Collective (which is just an awesome name), Bravery Network Online offers a lot of entertainment for an Early Access game. While I was initially drawn to the undeniably unique art style, once I began playing, it quickly became clear that this game is more than just some pretty flair (though there’s plenty of that, too).

Welcome to the Tower 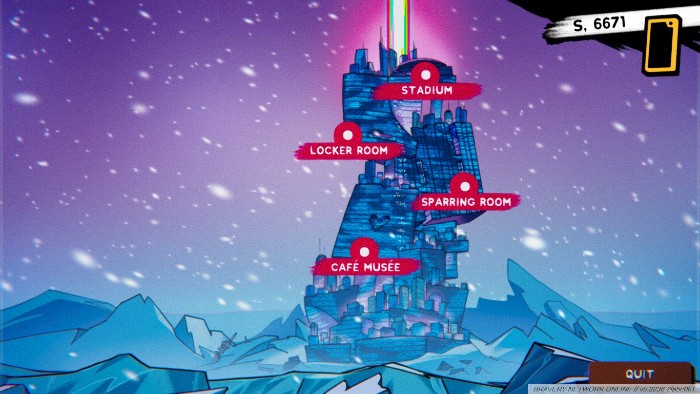 Bravery Network Online takes place in the futuristic world of Tower 6. With advances in technology, people no longer need to compete for resources, and instead, compete for fun. Their competition of choice? Bravery. And since the fighters are immortal, even if they die, they’ll come back to life to compete again.

As you can see, Tower 6 is split up into different areas. You can compete in 1v1 battles against other players in the stadium. The locker room is basically your home base where you’ll arrange teams of fighters and equip them with accessories. You’ll spar with would-be champions in, you guessed it, the sparring room. Finally, at Cafe Musee, you’ll be able to purchase color themes for your team’s clothing, as well as unlock accessories you can equip for effects. While the game world itself does feel perhaps a bit sparse, with very little story existing yet, keep in mind the game is still Early Access. So even though I wished there was more to explore/do in the game, what is available is very addicting. 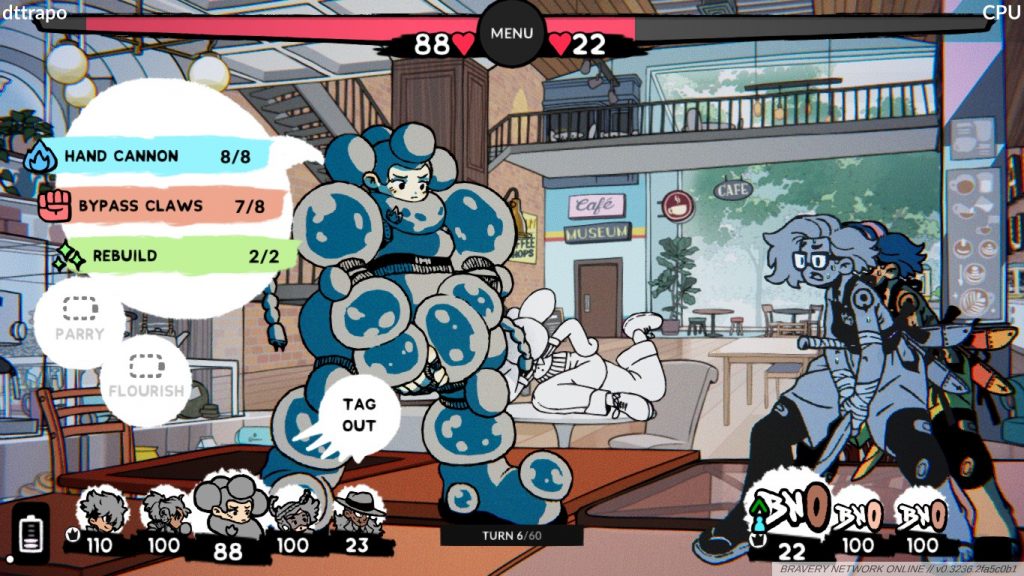 Where Bravery Network Online really shines is the combat. It’s surprisingly addicting, and deeper than it initially appears. While the setup of the battles initially made me think it was a fighter, it is in fact a turn-based RPG. Teams square off in one-on-one battles, with each side selecting a move in secret. In addition to selecting one of up to three available moves, you can also use a turn to swap out a team member. Doing so, however, will use up that turn, and the team member you tag in will take damage or status effects from the opposing team. Of course, your enemy may also do the same.

A stat called “initiative” determines which fighter gets to make the first move. Whichever fighter has the higher initiative usually gets to attack first. I say usually, because some moves will have a special effect known as “priority” which, much like in Pokémon, will prioritize that attack. These moves typically deal lower amounts of damage, but can be extremely useful for landing finishing blows.

As you attack, you’ll build up a charge that’s stored in the battery (seen in the bottom left of the above screenshot). When you fill a battery, you’ll have access to to the Parry and Flourish ability. Parry allows you to dodge one attack, but the battery will break and be unusable for the rest of the battle. Flourish, meanwhile, will deal a critical hit, which increases damage dealt by 50%, while also activating a move’s special Flourish effects. Timing when to use Parry, or when to use or save your Flourish can be the difference between victory and defeat.

Thick Thighs Save Lives (But Maybe Not in This Game) 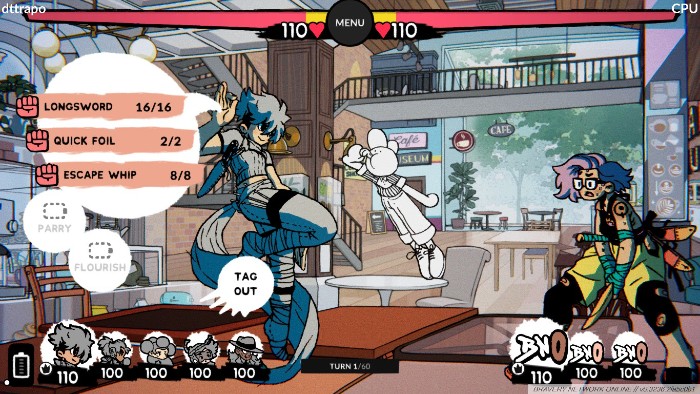 There are three types of direct damage you can deal: Physical, Digital, and Emotional. Physical damage, indicated by a red fist, does just that – deals ordinary, physical damage. Digital tends to look like magical attacks, and is represented by a blue flame. Emotional damage is represented by a purple quarter moon, and was my personal favorite. Emotional attacks usually have names like “Admire,” and while they aren’t always the strongest attacks, they can scale their damage up sometimes when the enemy is inflicted with “Feelings.” Feelings are basically status ailments, but much more entertaining. Some Feelings, like Hunger, will do increasing amounts of damage every turn, while others like Tired will make you take damage if you use certain moves. It’s great when you can inflict them on your opponents, and potentially devastating when they can inflict them upon you. It adds a layer of strategy to the battles that I found to be very enjoyable.

You can check the stats of your team members as well as your opponent’s simply by clicking on them. Doing so allows you to see a character’s initiative, stats in each type of attack, as well as defense for each type. There’s also a handy damage estimator that will appear when you hover over an attack you wish to use. It will give you an estimated damage amount for each of your opponents, even the ones not currently in battle. 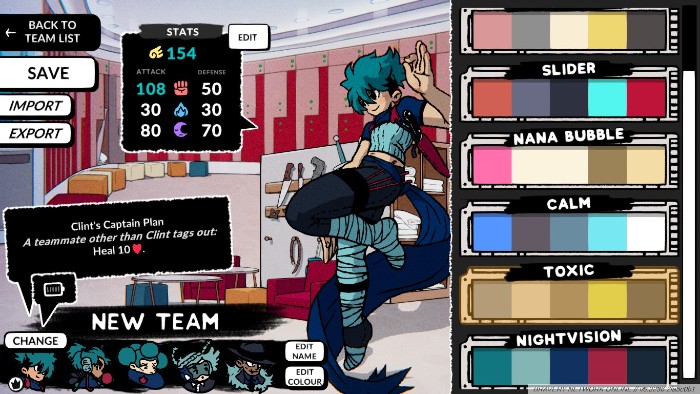 Winning fights will net you “sway” which is Bravery Network Online’s in-game currency. You can use it to purchase new accessories, new team members, and new color palettes. Back at the locker room, you can spend your hard-earned sway on new fighters, arrange new teams, pick the color theme you like for that team, and swap out the face of your becker. I haven’t shown a picture of your becker for a reason, because the surprise should definitely not be ruined.

The game’s flair also shines in the writing. The dialogue is goofy, but also surprisingly witty. Dripping with snark and sarcasm, bursting with humor, I’m definitely excited to see more dialogue in this game. I’d also like to touch on the game’s music, because it’s really incredible. Upbeat, techno-y, the music is addicting and I found myself humming along in battles, or bopping my head in time to the beat. It’s always nice when a game can serve up some great beats while your serving up a beatdown. The music always matched the mood of the game

Overall, though my time with Bravery Network Online was somewhat short, I really enjoyed it. Awesome battle mechanics, great music, an endearing art style, and tons of style and flair definitely hooked me, and I’ll be keeping an eye on this game going forward.