I Don’t Take Orders From Crows

After last week’s episode of Batwoman felt more like a letdown, I’m happy with Gore on Canvas. I wasn’t at first, and worried it was focused too much on the Crows. But it actually managed to move things forward effectively, and didn’t waste as much time with convoluted storytelling or flashbacks. The whole episode centers around a hunt for the painting that Kate was investigating before she disappeared. It’s by an artist named Jack Napier, who is apparently The Joker. I was surprised by this, but then I realized that this was a callback to Nicholson’s portrayal of The Joker in the original Batman movie. Since we’re likely never gonna see any Joker in Batwoman, I’m happy he managed to find a way to shine here. And while you may be wondering why Joker is mentioned in the same sentence as artwork, rest assured it’s the creepiest “art” ever. It’s a painting spattered with the blood of a hapless victim, which is very much Joker’s style. Oh and the painting itself is a map to the island of Coriana, which may or may not be where Kate is held captive. 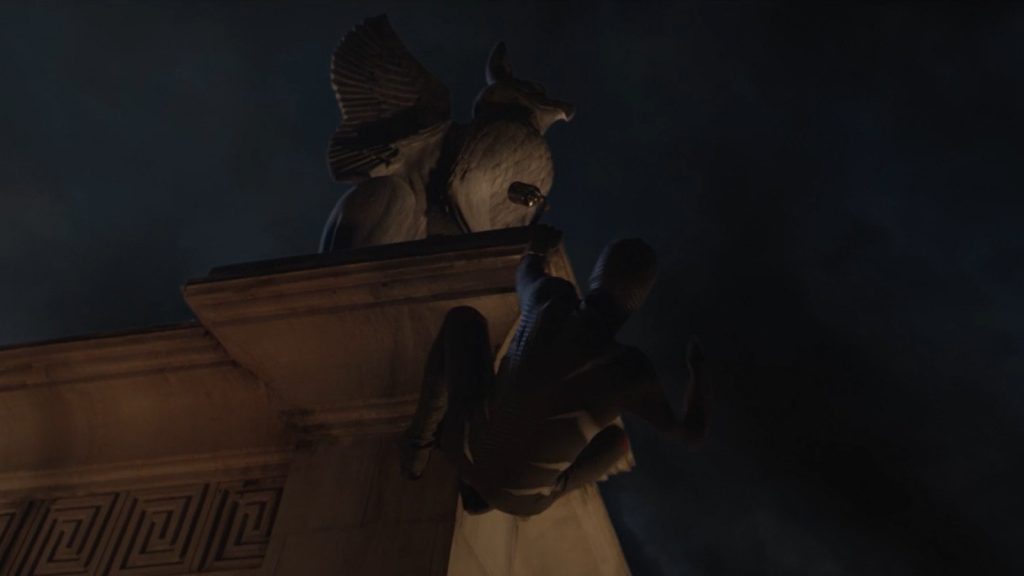 Things start with Jacob hunting for a group called the Collective. They’re basically underworld art brokers. After he gets a hot tip, his source is speared by one of Safiyah’s assassins. Before Jacob gets the hook, Ryan saves the day and takes the assassin to the Batcave for questioning. Unperturbed, Jacob decides to check in with one of Kate’s old friends, Evan Blake. It’s suspected he’s connected to the Collective. But other than being incredibly fabulous, Evan is unwilling to share any information. Thus Sophie is sent to get the assistance of the new Batwoman, a sure sign of how desperate Jacob is to get his daughter back. Ryan is very unwilling to play ball, but Sophie pulls at her heart strings saying how Kate is the love of her life. Despite not having a good history with the Crows, Ryan relents and decides to go undercover into the heart of the Collective.

Speaking of love interests, Ryan and Angelique are apparently back together. They’re letting bygones be bygones, which is a bit of a struggle after the way things went down. Angelique had a drug problem and Ryan took her drugs to help her get clean. Instead, Ryan was provoked and caught by the Crows for “dealing”, and spent time in prison. I appreciate the chemistry the women have, but that’s quickly put at risk when it turns out Angelique is dealing again, even though she’s not hooked herself anymore. In fact, she helps Ryan get into the Collective while undercover. She also convinces Ryan to get her bullet wound finally treated by Mary, which is great considering how far gone it looks.

Another positive development this episode is that Ryan is being much more assertive, as well as bonding more with her team. Luke and her finally share a moment, talking about their mutual dislike of the Crows. Her cause of her time in jail, him cause of the murder of his father. Mary is wonderful as always, and has a fun scene getting Ryan all fancy for her undercover mission. She’s so fantastic looking that Luke is left temporarily speechless, which was entertaining.

The other main arc in this episode involves Alice. Unlike her mischief in the previous episode, I felt it worked pretty well this time. She’s on the hunt for the mysterious man named Ocean. She manages to find him, but instead of immediately killing him she tries to talk with him to understand why she has unexplained memories. He doesn’t remember her either, but after chatting each other up in a bar, Alice is ready to go stabby stabby. Instead he gets the drop on her and interrogates her. It’s revealed Ocean is Safiyah’s brother, and in the process Ocean experiences some missing memories himself. Then a group called The Many Arms of Death comes to kill them both, only for Alice and Ocean to team up. While I may have not bought her with Sophie last week, I really liked this pairing. Which is fitting, since late in the episode it’s shown Alice and Ocean were a romantic item.

Down the Rabbit Hole

When Ryan is infiltrating the Collective, she comes into conflict with the Wolf Spider, a criminal art thief. There’s a great fight scene between Batwoman and the criminal. Wolf Spider is nimble and acrobatic as hell, which lets him get away from Batwoman and go running with the stolen painting. At first it looks successful, until a couple Crows run Wolf Spider over, knocking them out. It’s revealed the criminal is none other than the fabulous Evan Blake, and he’s summarily treated by Mary. Lastly, it turns out the painting he stole was a forgery, and that the real deal is in Ocean’s car. Overall a very solid episode, and a good step up from last week.