Deck-building With a Small Side of Fan Service 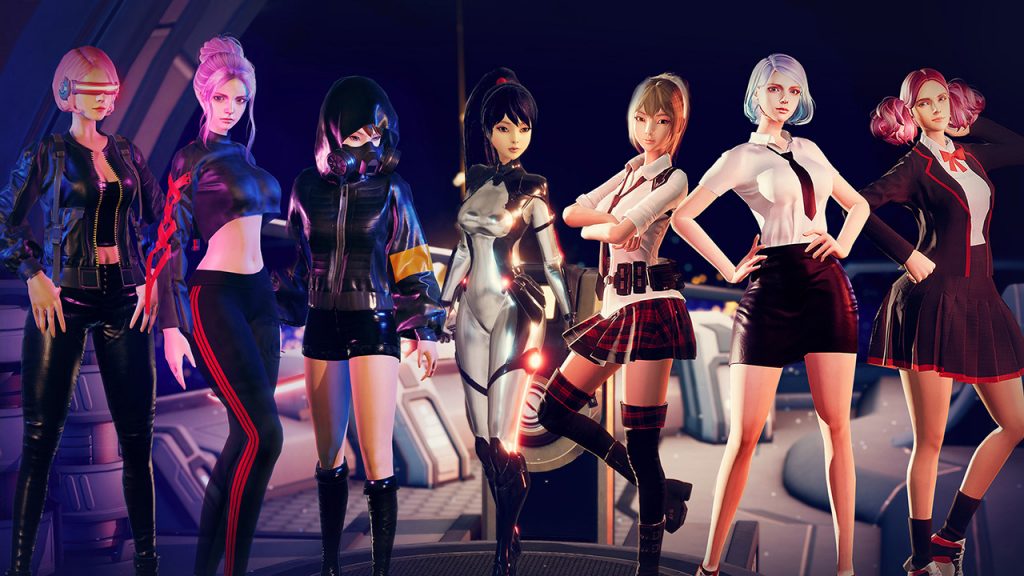 It’s no secret that I absolutely love–love– deck-building games, especially of the rogue-like/lite variety. While Slay the Spire probably holds the honor of best in the genre (in my humble opinion), Neoverse Trinity Edition certainly has plenty to recommend itself. Developed and published by Tino Games, Neoverse is one of those games you can pick up and play for a few minutes at a time, or lose yourself in for a couple hours.

Just Serving Up Some Radiation Poisoning 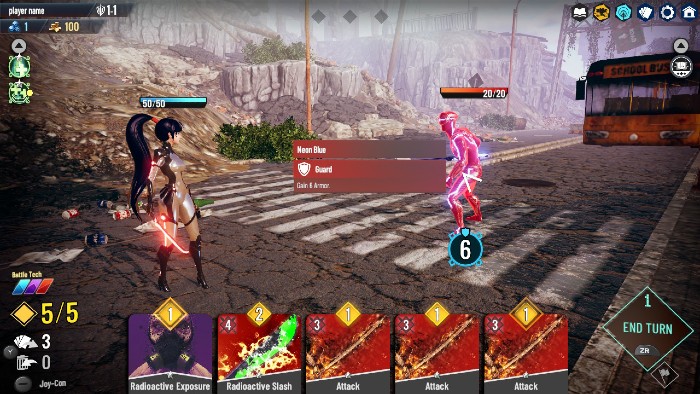 First things first: There is no story in this game. You’ll get some scrolling words on the title screen that give you a vague idea of the world the game takes place in, but outside of that, don’t go looking for any kind of plot. If you’re the kind of gamer that needs an engaging storyline to keep you playing, you’ll definitely want to look elsewhere. As for myself, I honestly didn’t find the lack of a story in any way detracting from my overall experience.

The focus of Neoverse is entirely in the gameplay. Which is a good thing, because the gameplay is extremely solid. You’ll always begin the game with a deck of basic cards, which typically includes a few attacks, a few guards, and maybe a skill or two. As you can expect from a deck-building game, each card has a cost (mana) to play, and it depletes how much mana you have (typically start with 3 points each turn, though cards and abilities can affect that). As you progress through the game, you’ll have the opportunity to add more cards to your deck. You can receive them as rewards for winning a battle, fulfilling certain conditions, or buying them from the in-game shop.

You Know What They Say About Big Hands… (Big Decks!) 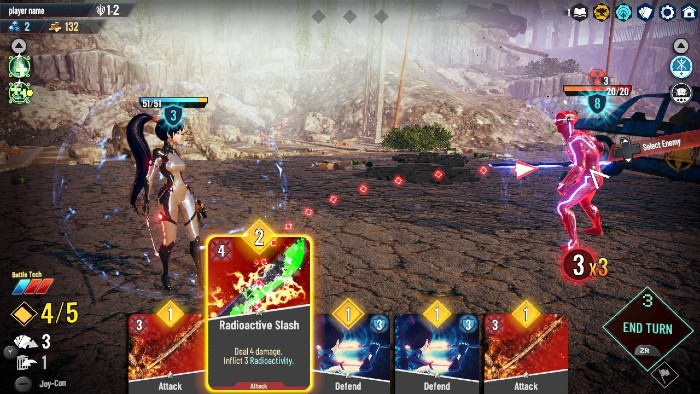 This is, obviously, the most important mechanic of the game, as everything revolves around how well you structure your deck. Too many attacks and not enough defensive cards? You might find yourself getting slaughtered. Not enough skill cards? You may not be able to boost your stats enough to kill tough enemies. Collect too many cards and you reduce your chances of being able to draw the one you really need in your time of need. It’s a delicate balancing act, and since the card rewards you can get are randomly generated, it means you either have to regularly change your strategy, or try to find cards that are synergistic. That also means that you’ll never have the same deck in any of your runs.

There are three characters you can choose from in Neoverse: Agent Naya, Paladin Claire, and Summoner Helena. Each character has its own unique card pool to collect from, each with their own strengths and weaknesses. What I particularly appreciated is that not one of these characters plays like another. They are really, truly unique, and learning how best to utilize them in battle is a very rewarding exercise. Additionally, as you complete successive runs with each character, you’ll unlock new starting decks that each have a different strategy/theme. Since there isn’t any story to speak of, that gives me a bit more time to go into detail about each character. 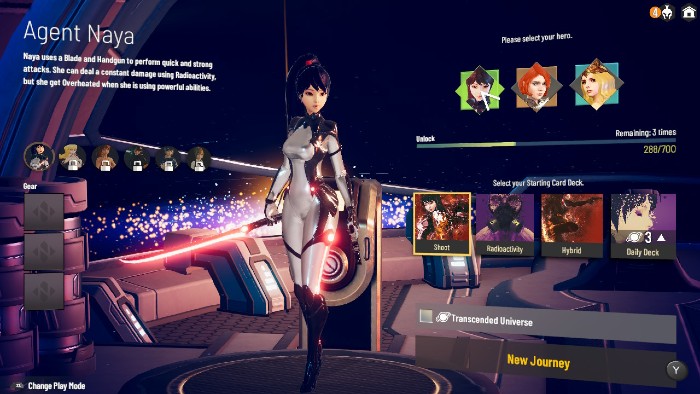 Let’s start with Agent Naya, since she’s the first character you have available. As with the other two characters, her basic starter deck revolves around simple attack and defense cards. But Naya also has “Shooting” type cards, which usually deal more damage than a standard attack card. However, the downside is that each use of one of these cards increases her “Overheat” number. If you reach five Overheat, the counter will reset, but a card that causes 2 damage directly to your HP will be added to your deck. While you don’t have to use it, it will take up valuable space, and every time you shuffle your deck, it will remain there with the rest of your cards. Thankfully, Naya also has defend and what are basically skill cards that help reduce her Overheat number. Balancing the Overheat counter, your Mana, your HP, and your deck is a fun, interesting challenge.

After you’ve completed a few runs, you’ll unlock some additional themed decks. For Naya, her extra deck revolves around inflicting the “Radiation” status, which is essentially poison. Radiation will deal damage at the start of the enemy’s turn equal to their Radiation counter. Attacks and skills will help you ratchet that number higher, and there’s something incredibly satisfying about defeating a particularly tough enemy through almost entirely indirect means.

Vampire Warrior Nun, Because of Course 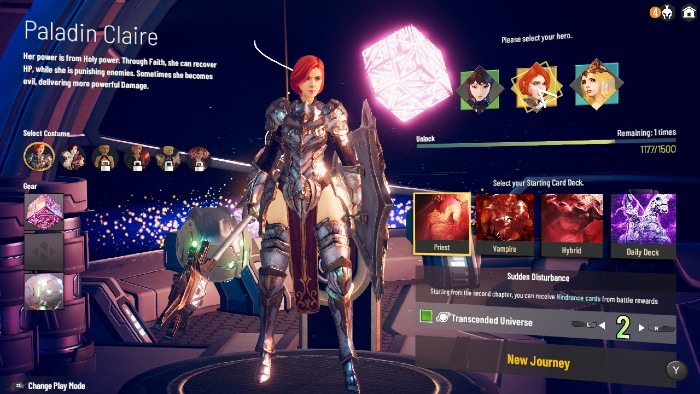 The second character you’ll gain access to is Paladin Claire. She’s an interesting character, in that her cards reflect a nature that can shift between good and evil. Initially, you’ll have access to cards that raise her “Faith.” After your Faith counter reaches five, you’ll receive a God’s Answer card, which is typically a very powerful, low-cost card that has a one-time use before it’s removed from play. The God’s Answer card you receive is randomly generated, and varies from attacks to defense to healing. Many of the cards that raise Claire’s defense will either afford her some defense points, or will heal her HP.

The flip side of Claire’s Faith cards are her “Vampiric” type cards. I personally had way more fun with the Vampiric mechanic than I did the Faith mechanic, though there’s absolutely nothing stopping you from trying to combine them. Her Vampiric cards revolve around the ability to do much greater damage, as well as heal by that amount of damage. Certain cards will add towards Claire’s Vampiric counter. Using an attack will deplete that counter by one for each attack used. Thankfully, any leftover Vampiric carries over to the next turn. For example, if you have 7 Vampiric, and you attack twice, you’ll be left with 5 Vampiric that will roll over into your next time. Additionally, when you have any number in your Vampiric counter, you’ll absorb HP equal to the damage you dish out. It’s very much a risk-reward system, and it made her hands down my favorite character to play.

Lions and Dragons and Gryphons, Oh My! 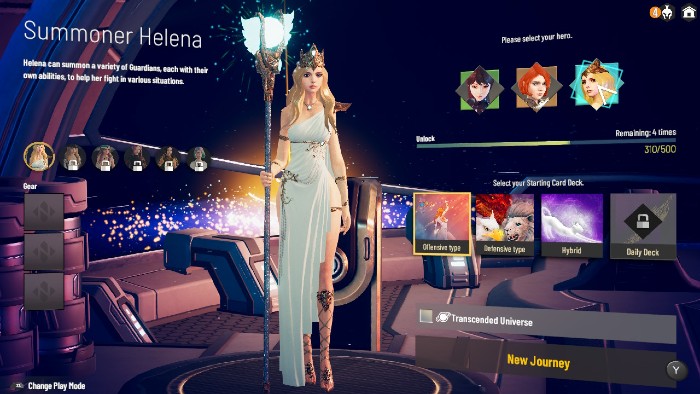 Last but not least (okay, maybe least) is Summoner Helena. As her name implies, she summons creatures to aid her in battle. Honestly, she was my least favorite character to play, but that doesn’t mean she’s not a solid choice. Her deck choices are largely split between offensive and defensive play. You can summon three different creatures: a dragon, which will deal a small amount of damage to all enemies on screen, a lion that will deal a high amount of damage to a single enemy, and a gryphon that will help you guard against damage. You can have one creature summoned at a time. Summoning a new creature will dismiss whichever one you currently have as your partner.

In order to take advantage of these creatures, you’ll need to gain “Command” points. Each creature has a different requirement for the number of command points you’ll need to use their ability. Additionally, at the end of your turn, their ability will activate. She’s honestly not much more complicated than that. I didn’t notice a great difference between her offensive and defensive decks, and with the lowest HP of any of the characters, she’s a bit of a challenge to master. I will say, even though she wasn’t my favorite character, I still found her to be exceptionally well-balanced. 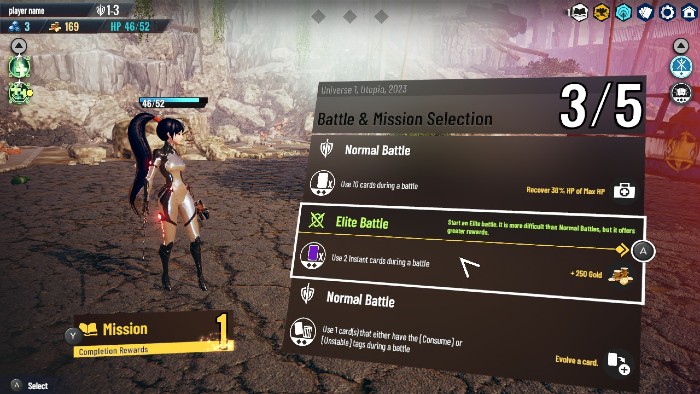 After you select your character, you’ll be given a set of choices to make, each with their own reward. This is how you select which “stage” you want to do in each world. I use the term “stage” lightly because really, it’s just choosing a battle. Each world has five stages, with the fifth always being the boss fight. Each stage has a reward you can earn by fulfilling certain requirements. What’s nice is that you don’t have to complete it for that stage. It will remain active until the very end of the game, so you can fulfill it at any time. Rewards vary greatly, from additional skill points, to new cards to stat buffs. Skill points can be used to obtain skills, of which there’s a wide range available.

Overall, there’s a lot to recommend in Neoverse Trinity Edition. It’s addicting, it’s great in short bursts and long runs, and it’s got characters and decks that are excellently balanced. Really, the only downsides are the lack of tutorial, the small text (it’s very hard to play in handheld mode until you know what the tiny text says), and the slightly wonky controls (it’s very easy to accidentally select the wrong item or card and then use it without realizing it, though you learn to be more careful eventually). There’s plenty of replay value, too, with each character having multiple unlocks for new cards, costumes, skills, and more. There’s also additional modes if you’re looking for a greater challenge.

If you’re looking for an enjoyable deck-building game, give Neoverse a try. Unless you are looking for a story to keep you engaged, I don’t think you’ll be disappointed.

Full disclosure: This review is based on a copy of Neoverse Trinity Edition provided by the publisher.

Shoot For The Moon. Even If You Miss…Well Seriously, How Do You Miss The Moon? Space is truly the final frontier. The empty vastness of the black beyond is…