A Roguelike Worth its Weight in Gold 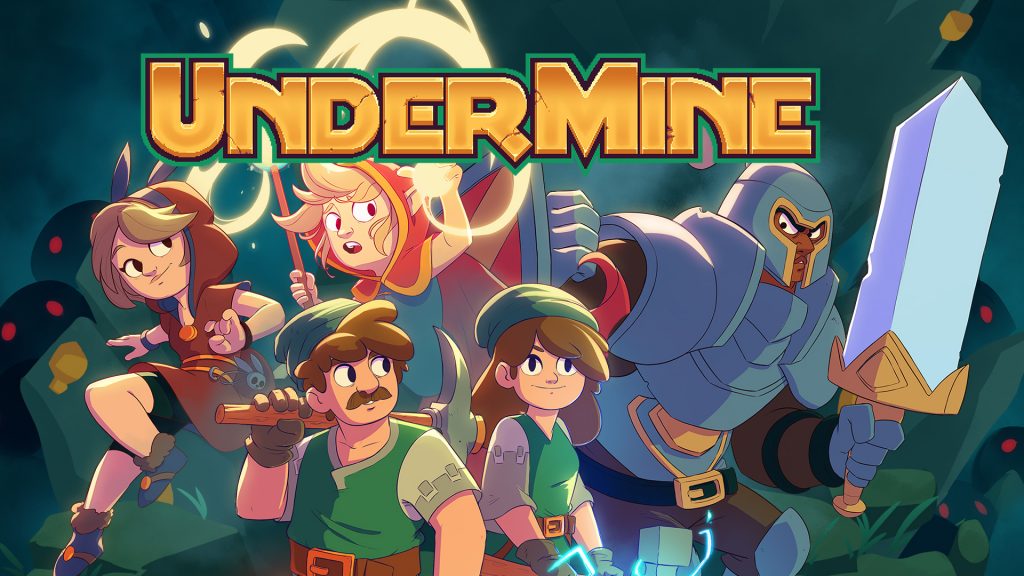 I really enjoy a good roguelike dungeon crawler. The Binding of Isaac, Afterbirth/+ included, is literally one of my favorite games on this planet. It’s also the game responsible for awakening said previously mentioned appreciation for roguelike dungeon crawlers. But, of course, not all roguelikes are the same. Enter the Gungeon, for example, was a lot of fun but was also a bit too… well… gun-y for my tastes. I like my dungeon-crawlers less Touhou and more LoZ (and that’s A-OK if you disagree with me). But there really haven’t been many games capable of truly satisfying my craving for a good roguelike dungeon crawler, recently—at least, not until I was able to dig into UnderMine.

The fact that I wasn’t even able to get through a single paragraph without mentioning two wildly popular games within the same genre as the one I’m currently reviewing might sound a little concerning. Still, I can promise you that there’s no need to worry. That was simply just me setting up the picture, and I can promise you that it’s not something I’ll be doing going forward (probably). UnderMine is very much a roguelike dungeon crawler that stands on its own two peasant-esque feet—I would even go far as to say that it stands out amongst roguelikes. It’s certainly not traditional, but that’s okay. In fact, that was probably what ultimately helped draw me toward it so much in the end. 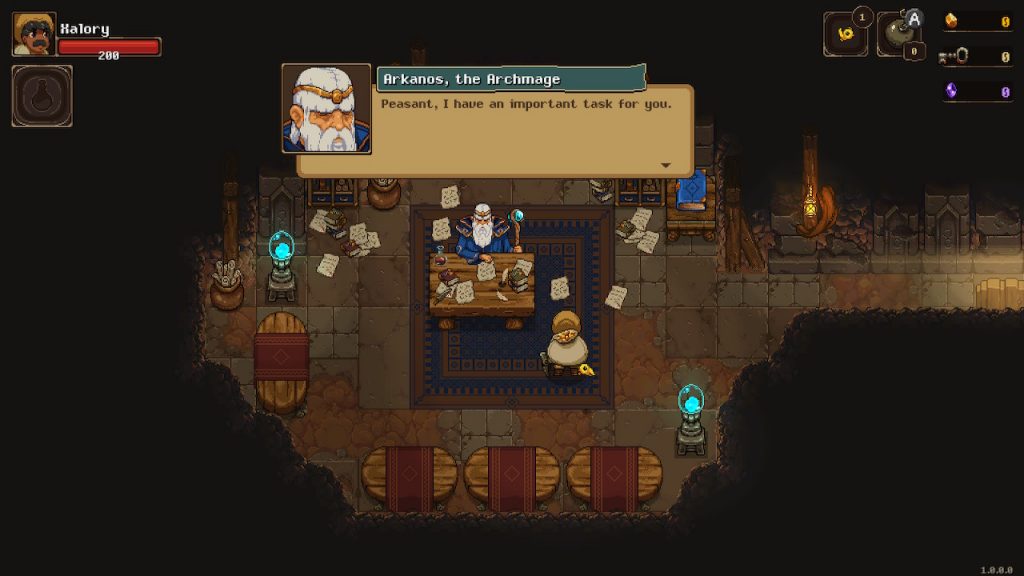 Whatever it is, I’m sure that I’m not up to the task!

UnderMine‘s story, perhaps unsurprisingly, is short and to the point. You take on the role of a nameless (pay no mind to the name in the upper-lefthand corner) peasant, tasked with assisting Archmage Arkanos in delving deep into an underground dungeon known as the “UnderMine.” Why Arkanos, a seemingly all-powerful mage, couldn’t be bothered to do this himself is beyond me, but, well, them’s the breaks.

Due to its roguelike nature, UnderMine‘s story—along with not being terribly long—is sprinkled throughout the game instead of being heftily dropped on the player. As you progress, you’ll find people and items from which you’ll gain bits and pieces of knowledge regarding the overarching story. Overall it isn’t anything terribly special, but it’s well-written and fits the rest of the game’s framework nicely overall. 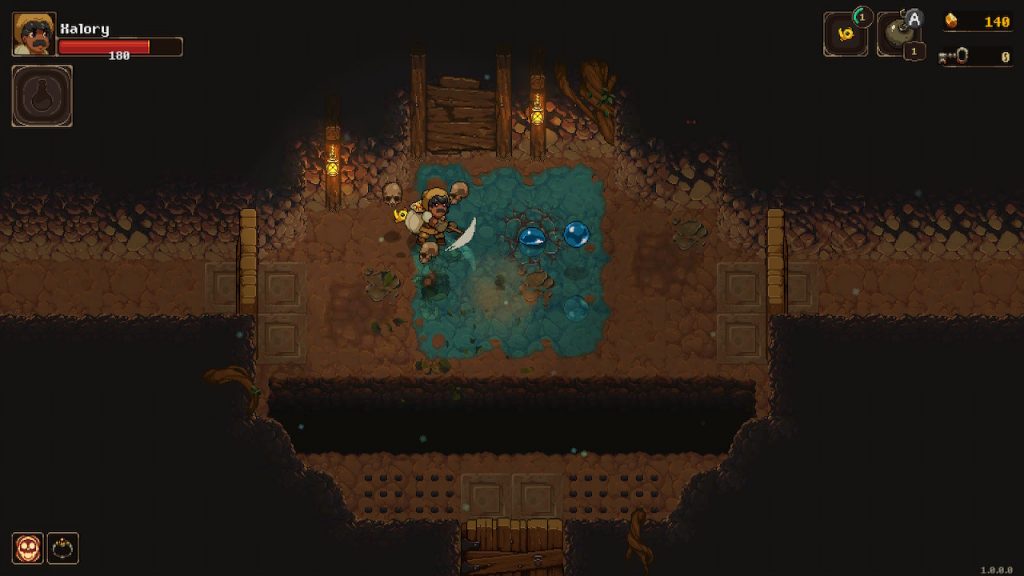 Alrighty, it’s time to look at the gameplay—and what better place to start than with the basics? When broken down to its most core components, UnderMine is a roguelike dungeon crawler. Well, technically, it’s more of a rogue-lite, but I’m not going to start splitting hairs. Anyway, I’m sure that most of you know what that entails, but it never hurts to go quickly go over things. This game’s main objective is to make your way through a procedurally generated dungeon that does everything in its power to kill you. Naturally, the thing that makes this game different from standard dungeon crawlers is that you’re not supposed to get through it in one, two, or even ten sittings. Before you win, you’re going to die—a lot.

Procedurally generated mega-death-dungeon aside, there are plenty of other things that also help firmly cement UnderMine into the roguelike genre. Each floor has a treasure room—which features some kind of permanent power-up for that run—a shop, monsters specific to whichever particular segment/biome of the dungeon you’re in, and, of course, the all-important bosses. And, when it comes to all of these things, I don’t have much to say aside from the fact that they’re all well done. If you’ve played enough roguelikes, you know what to look for in a roguelike—UnderMine definitely has what you’re looking for when it comes to the basics. 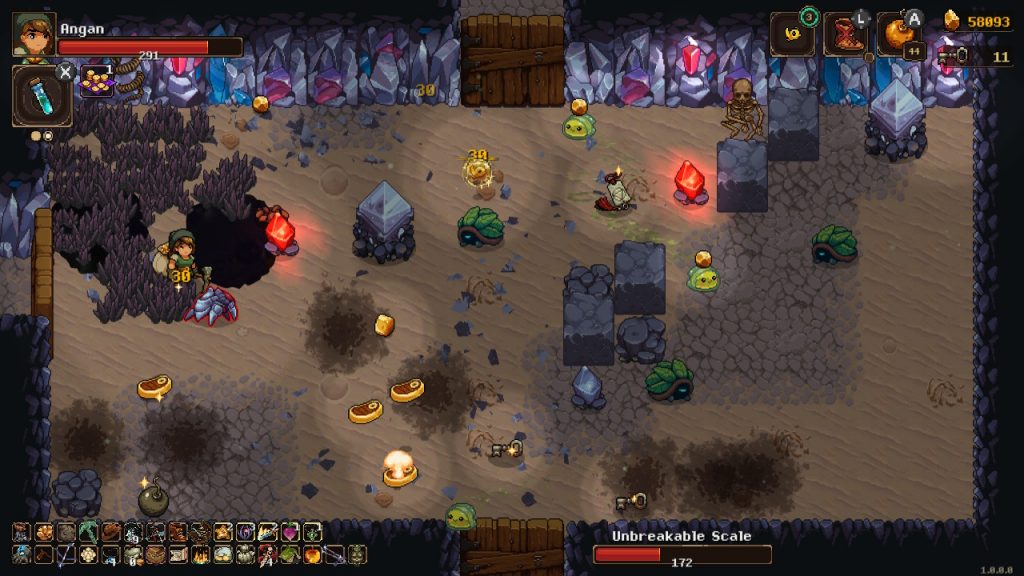 Alright, so it looks like we’ve got all of the basics taken care of. Now it’s time to talk about what makes UnderMine shine! And, when it comes to shining, there’s no better place to look than at its bountiful deposits of gold. Now, the idea of putting currency in a roguelike isn’t new—in fact, almost all of them do it. But UnderMine takes it to a whole new level. You see, making money, technically speaking, isn’t necessary. All you really need to do is collect those magical whatever-they’re-called for Old Man Wizard who’s sitting pretty above the mine. And that isn’t a bad idea, because this place is absolutely teeming with danger… but it’s also overflowing with riches!

In just about every room in the game, you can find gold deposits stuck inside of something. It could be a rock, or a statue, or a sacred ornament, it doesn’t really matter—what does matter, however, is that it’s there. And, given that you, a lowly peasant, have a pickaxe at your disposal, it’s your only way to make cash in this game. Unlike with most other roguelikes, gold is fairly easy to accrue in this game—and that’s exactly why the developers added a big, gelatinous caveat. 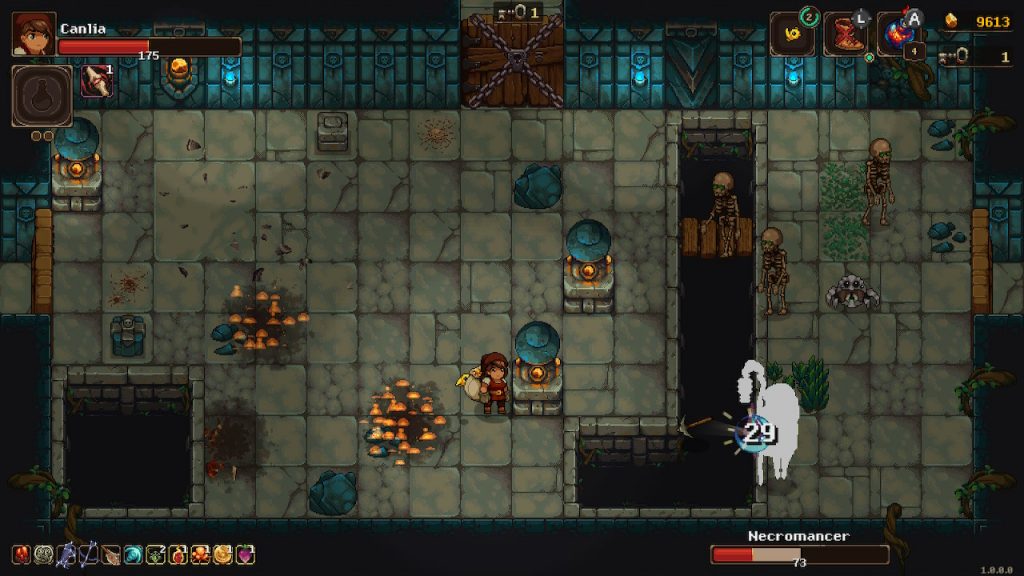 Generally speaking, you should kill, THEN collect.

Every time—every single time—anything sparkly appears, these little slime monsters called “pilfers” will pop up out of the ground. The good news? They can’t hurt you, you can hurt them, and they’re dumb enough to run into traps. The bad news? They will do everything in their power to steal your gold. Because of this, collecting money is always a literal battle in Undermine. Fortunately, it’s typically not a terribly difficult one—unless you fail to clear out the actual monsters before you make a dash for the cash—but it’s still enough to keep you on your toes. Can it be annoying? Yes. But I kind of love the idea that the game constantly gives you opportunities to make lots of money and ensures that it’s (almost always) your fault if you don’t end up as rich as you’d like.

What’s In Store For Us 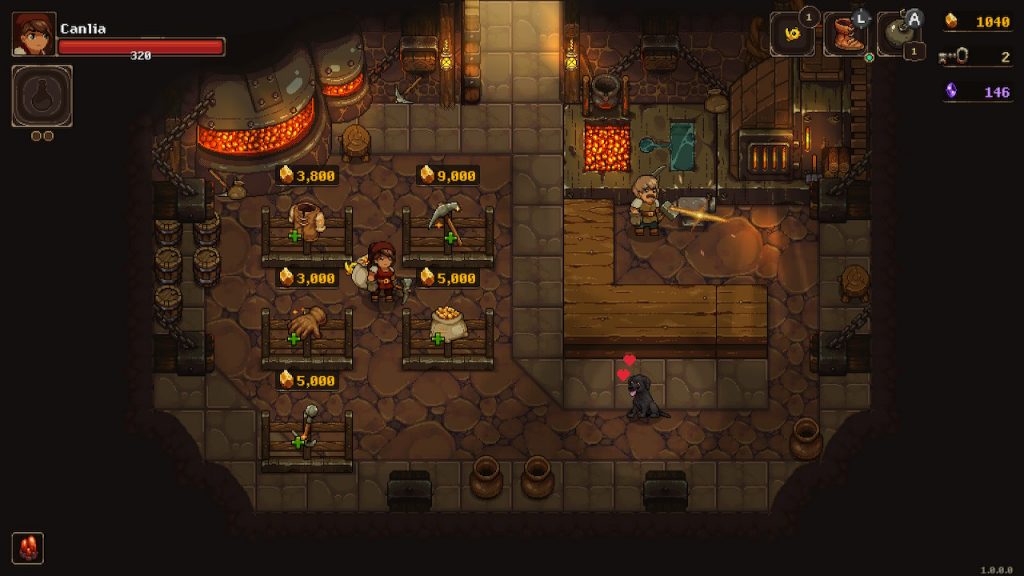 I feel like I should also mention that this game has unlockable dogs, which is a good thing as far as I’m concerned.

So, I’ve been going on about how great it is being able to collect money and all, but, in the end, who really cares? This is a roguelike! You lose it all when you die, right? Wong! While the price for a new run in most roguelikes may be the emptying of your pockets, there will be nothing of the sort in UnderMine. While gold can be spent at shops mid-run, most of your spending will be done before you start your adventure per traditional roguelike rules.

Upon death, you lose only one thing—your peasant. But, like, who cares? They’re all interchangeable, and you get a new one for free right away at the beginning of each run. Human life shmuman shmife, am I right? The good news is that you don’t lose your gold! Yay! Or, at least, you don’t lose all of it. And the gold that you were able to bring back topside can be spent on one of many lovely items, including permanent upgrades to combat stats and gold integrity (which affects how much gold carries over to the next run), the ability to start with random blessings (i.e., buffs) each run, and more. 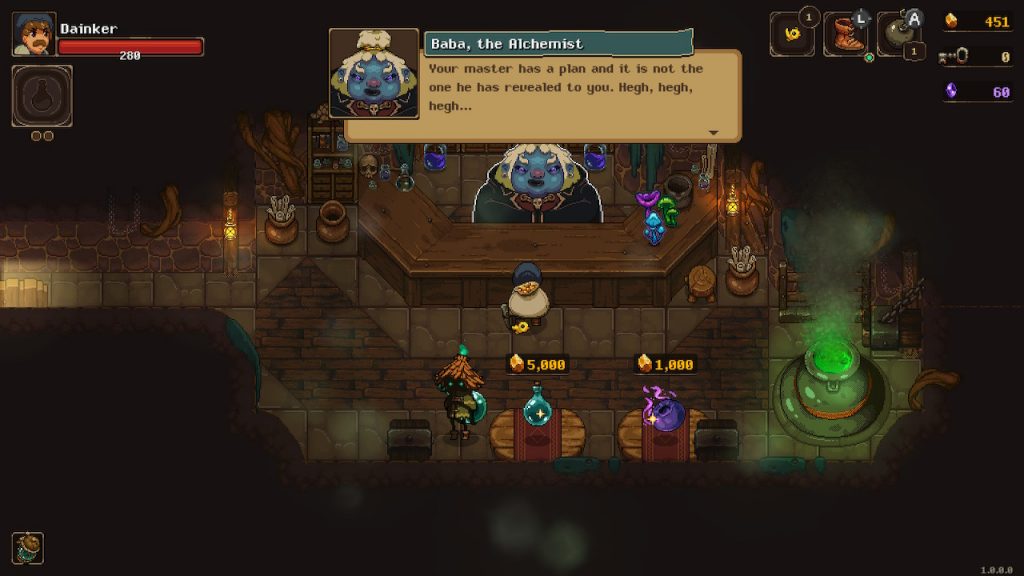 Oh, that’s no good. Anyway, what do you have for sale?

Additionally, you can also spend a currency known as Thorium in the hub world. While extremely rare compared to gold, Thorium allows for crafting new items, potions, and blessings (provided you’ve found each of their respective blueprints). And, as a bonus, unlocking any one of these things for the first time lets you start with them in the next run. I personally felt as though there weren’t a ton of unlockables, especially when you compare this game to other roguelike dungeon crawlers (which I said I wouldn’t do, so I’m sorry about that), but they all seem to work really well, so it didn’t bother me much in the end.

As far as roguelike dungeon crawlers go, UnderMine is firm but fair. There’s no need to go into this game bracing yourself for a barrage of beatdowns like you would with others of its ilk, but you’re also not going to get very far if you think that a slower approach to the roguelike experience means an objectively easier one. I know that my tastes are not representative of everyone else’s. However, I’d still like to confidently state that UnderMine is a must-play for anyone who fancies themselves a roguelike fan.

Full disclosure: This review is based on a copy of UnderMine provided by the publisher.

A genuinely good attempt I’m pretty skeptical when it comes to games made with RPG Maker. It’s cool and everything that there’s a program that lets aspiring designers make games with…