Pick a Door, Any Door… 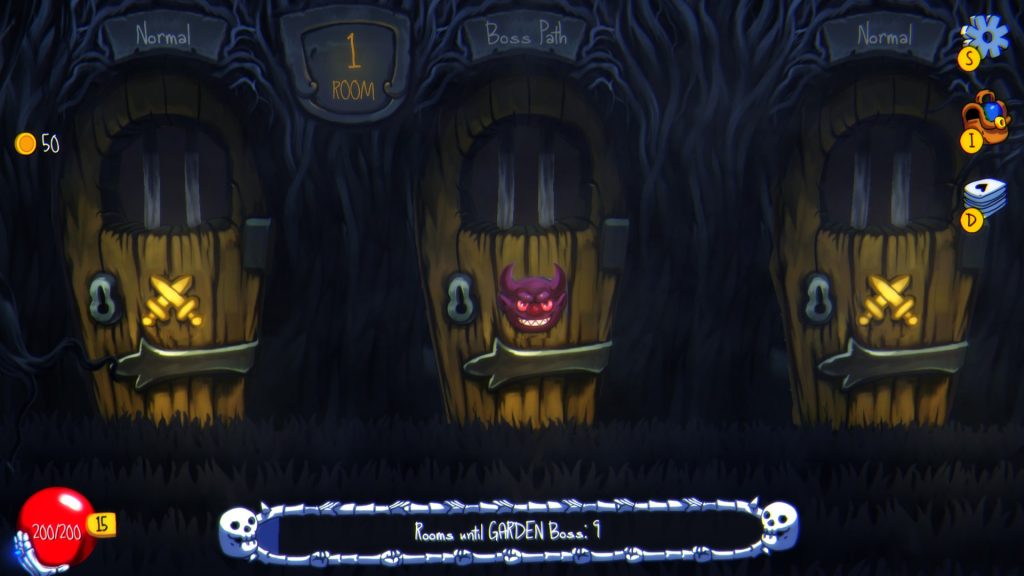 Another Indie has been on my radar for a while now. Yet somehow, I kept missing out on opportunities to cover games published by them. Which is unfortunate, since so many of those titles really appeal to my sensibilities. But that negative trend ends today with my coverage of Doors of Insanity. It just launched on Early Access, developed by OneShark and published by Another Indie, and it’s utterly insane (in a good way). 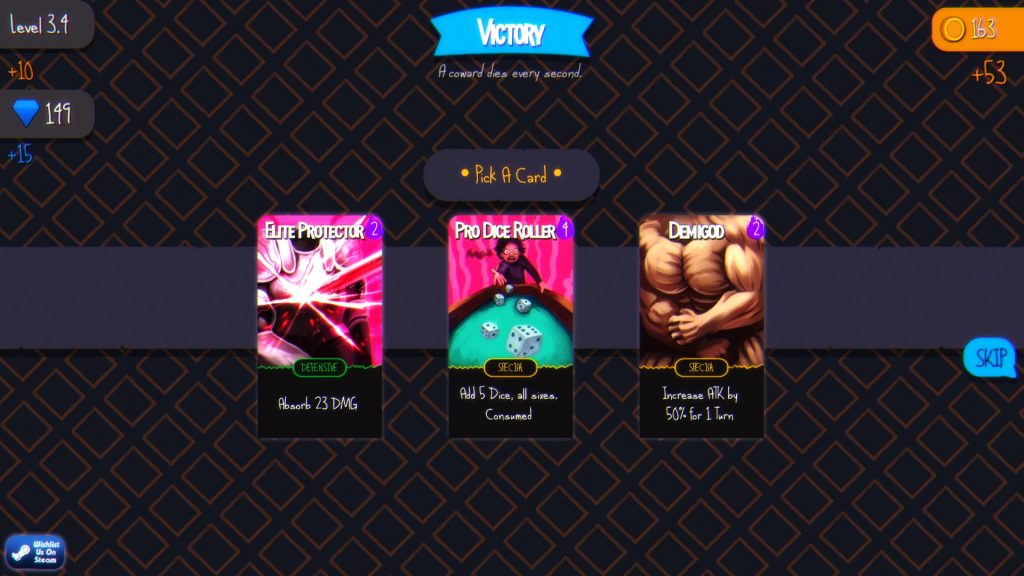 The thing about Doors of Insanity that first appealed to me was that it’s a rogue-like with card mechanics. If you slap cards into pretty much any game, you have my interest. Which is probably a weird side effect of my Yu-Gi-Oh! fandom, but that’s a story for another day. Point is, I love the interplay of card mechanics, and find they work surprisingly well in a rogue format. And luckily, that trend continues here. 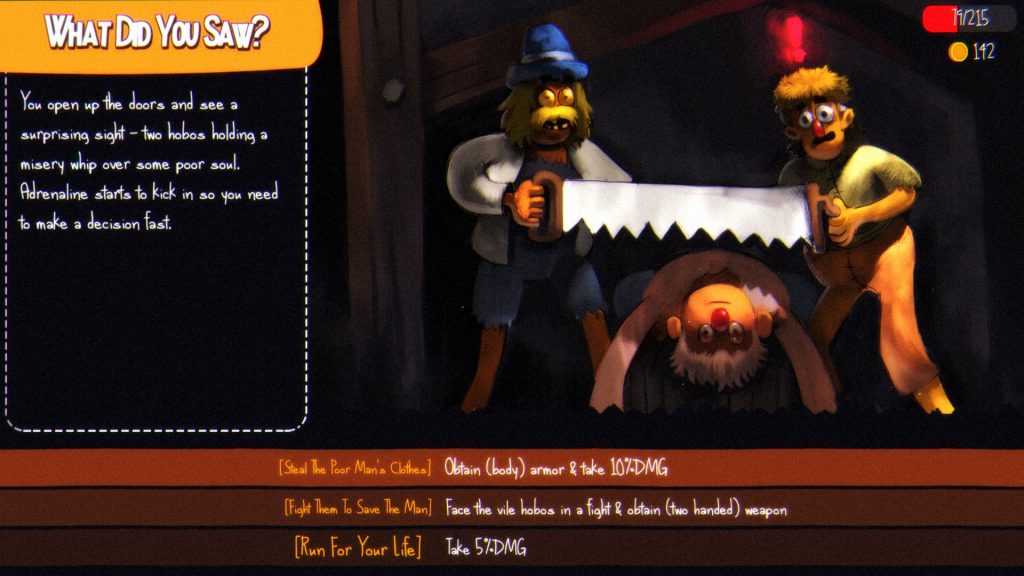 Doors of Insanity plays out like a dungeon crawler. You traverse through dangerous labyrinths full of monsters, freaks and traps one door at a time. Each dungeon is full of different marked doors to go through and culminates with a boss battle at the end. Doors can open up into random battles against foes, dangerous mini bosses, merchants, wells of healing and events of chance. The last one is the doozy, since those are really unpredictable and have a ton of variation. The one thing they have in common is your choice determines the result. You might come across a razor blade and choose whether or not to cut yourself in order to get a new card. Or you might ride on a banana boat for some healing. Maybe you’ll save someone from saw-wielding hobos. It’s really diverse and crazy, and it’s a large part of what makes Doors of Insanity so compelling. 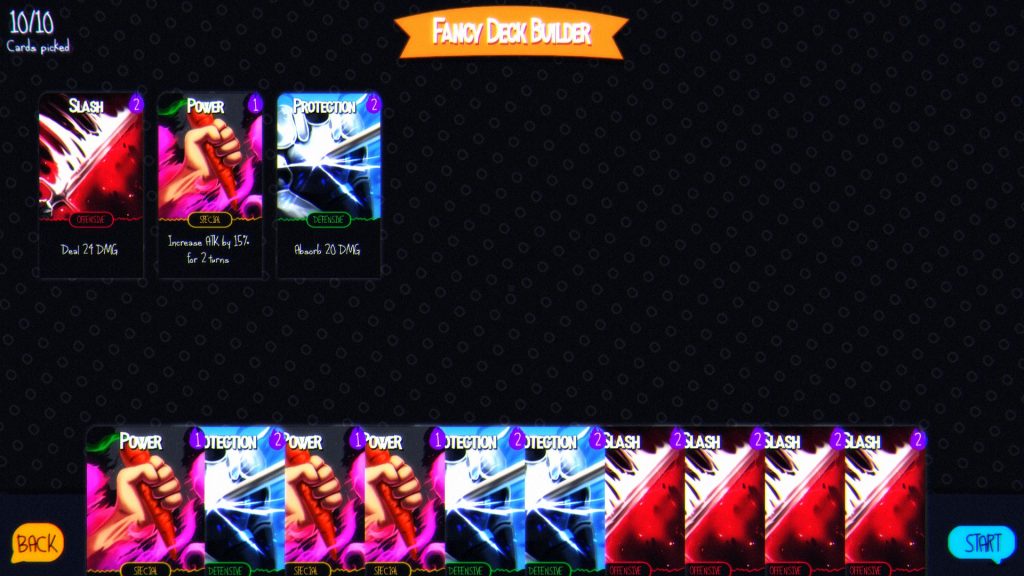 At the start of any run, you first select a basic deck of cards. It has to include 10 cards, chosen from a small handful of options. The main three choices are an Attack card, a Defense card and a Power Up card. But each time you die, you get to pick one additional card to take with you on the next run. The only downside is that you can only keep one copy, whereas you can take as many copies as you want of the basic three cards. You’ll also acquire other cards which increase your deck size as you play. During combat, each card has a specific Mana value to activate it. You only have 6 Mana each turn, so you have to be careful about putting Mana rich cards in your deck. Though there are ways to reclaim your Mana, it’s better to focus on cheaper cards, at least to start. You’ll eventually also come across super handy cards with zero cost, as well as cards you can activate with coins you’ve accumulated from battles. Some powerful cards get ‘consumed’ once you use them, but that just means you can’t use them again that battle. They’ll respawn in your deck afterwards. By contrast, most cards go to your Discard pile, and get shuffled back in when you run out of cards. 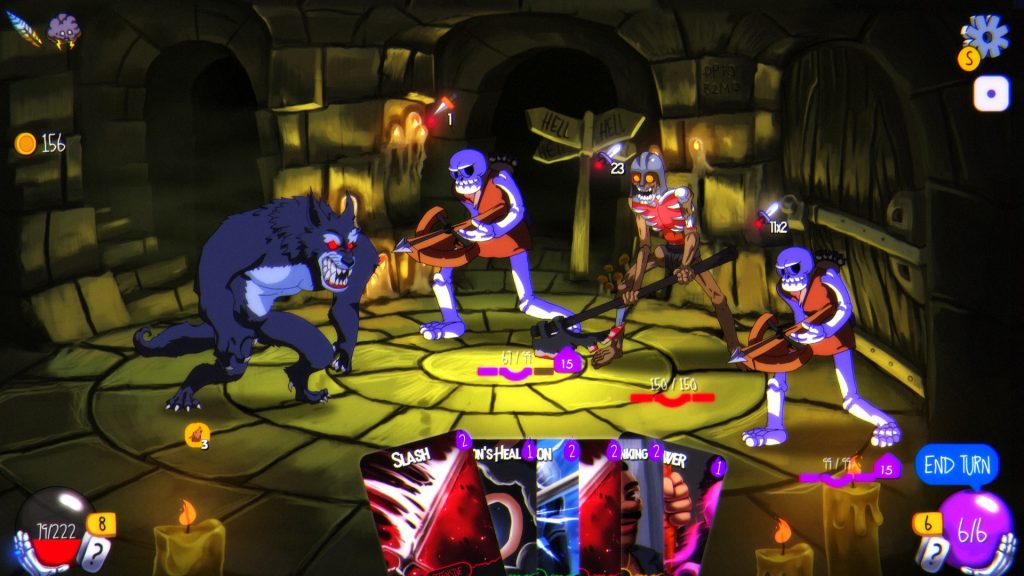 Some of the most exotic cards are summons of friendly creatures. Many will attack the enemy, others will defend you and various other effects. The more important issue is defending your health, since healing wells are few and far between. Defensive cards let you ‘absorb’ damage, which essentially prevents a certain value of damage from touching your HP. Your health turns purple when that effect is active, just in case you forget. But at the end of your opponent’s following turn, this effect disappears. So it’s a constant struggle to decide whether to spend your precious Mana on offense or defense. Once I unlocked the boons from dangerous deities at the start of my runs, this got a bit easier, since a lovely goddess would boost my base Defense value. But not enough that I could play recklessly. 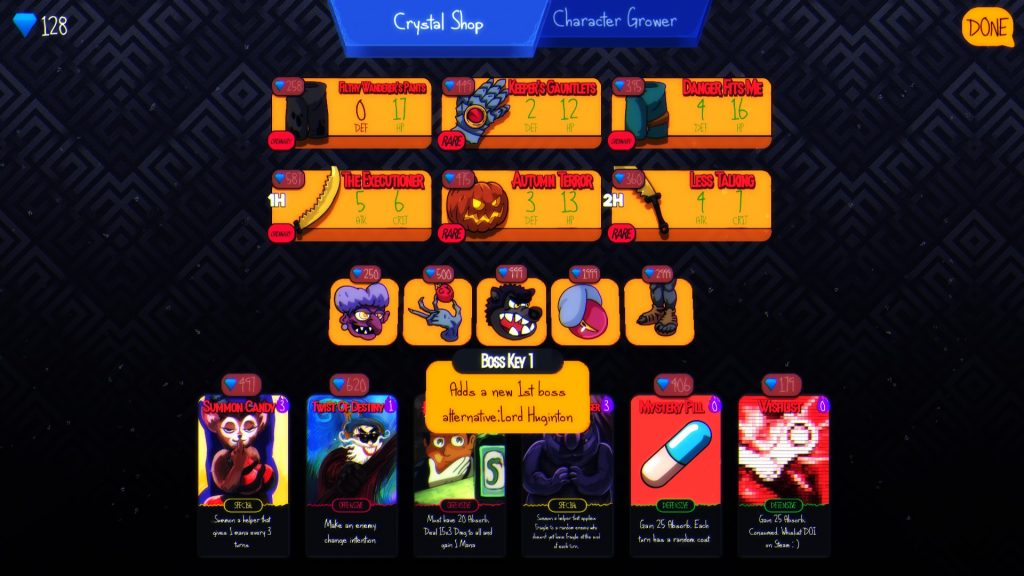 Every time you win a battle, you’ll get your choice of new equipment. You can only pick one out of three, or you can pass if nothing looks appealing. Sometimes the game will automatically equip what you’ve picked, other times you’ll have to manually change things. Regardless, each piece of equipment boosts your stats and changes your appearance. The most important items boost your base HP, though you can also enhance your strength and defense. You’ll also sometimes find rare artifacts. These are active the moment you choose them from a chest. Just be wary, since some chests bite back. I preferred the artifacts with no downside, such as healing some HP at the end of every battle. But there’s definitely a benefit to picking the riskier stuff, at least if you feel confident you can make it work. 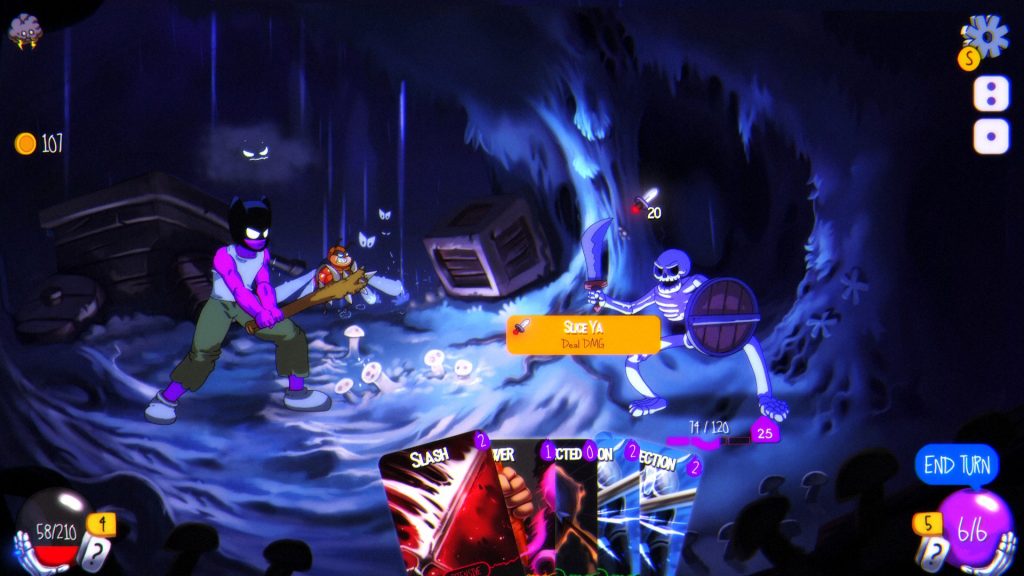 The oddest part of the combat revolves around dice. A new dice will be added to your pile every turn, with a maximum of 6 at any time. At the start of each turn, any dice you have will be randomly re-rolled by the CPU. You can use dice on opponents to inflict some extra damage, or on yourself to boost your absorb value temporarily. Basically, multiply the dice value by 2, and it will have that much of an effect. That’s good and well, but I constantly forgot the dice were there. They’re relegated to the far right side of the screen, while my cards are in plain view on the bottom center of the screen. Though some cards can manipulate your dice, most of them don’t. I frankly felt the dice was the weakest strategic aspect of Doors of Insanity. Maybe there’s a way they can be incorporated more effectively, but for now they were underwhelming. 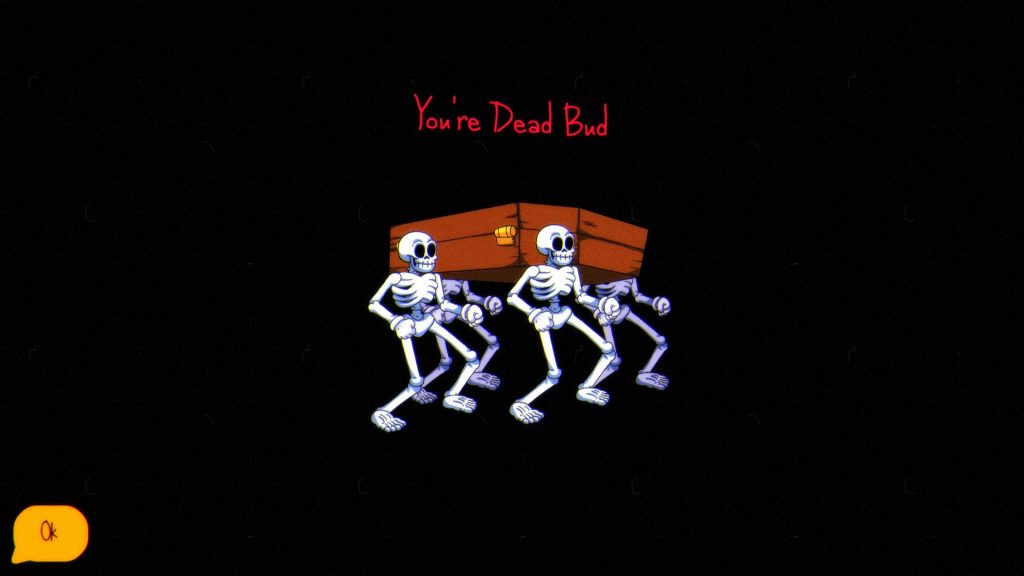 Now, because this is a rogue, you’re gonna die a lot. That’s not a problem, since you can unlock things to make each progressive run easier. You’ll earn gems to spend on new items and features, such as the aforementioned gods and goddesses blessing you. You can also unlock things like a steeper difficulty (for you masochists out there) and new equipment that will show up. Also, your character will gradually level up, and each time you do, you get some Pentagrams to spend on other unlocks. Mostly boosting your starting stats or making items less expensive. That said, you’ll have a lot more gems than Pentagrams, so plan accordingly. And lest you thought leveling up would heal your character, think again. Doors of Insanity isn’t gonna hold your hand that much. 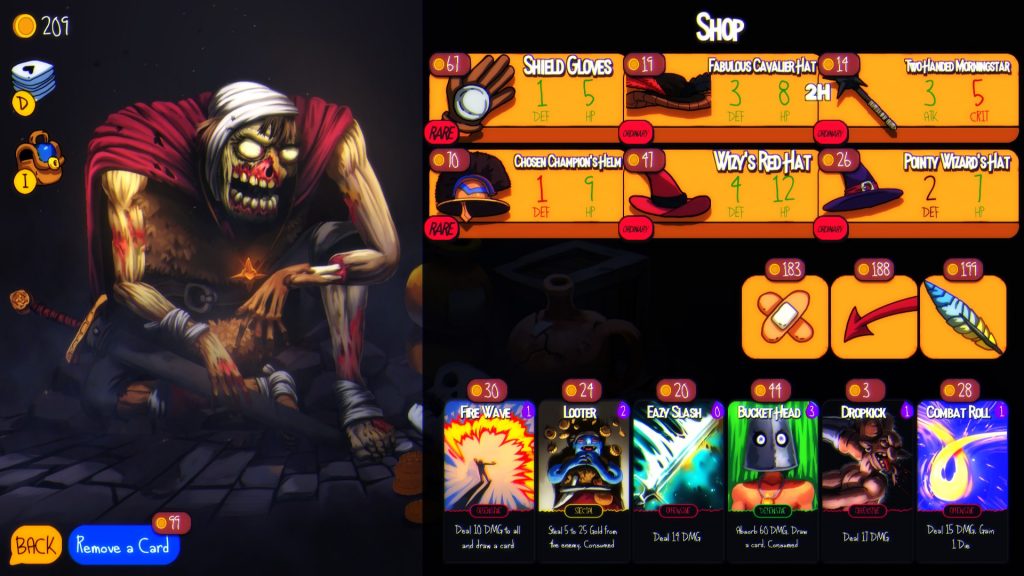 I really like the visual style of the game. It reminds me of Cuphead, but mixed with a little Binding of Isaac horror. It looks like there’s a couple of different artists on hand, since there’s some huge stylistic differences between the character models and the still art used for events. Regardless, everything is bouncing with energy and full of personality. You won’t get bored by anything you see, though the dungeons themselves are much less entertaining than the creatures that inhabit them. It’s also cool that you can design your character avatar, choosing from many pre-selected options and colors. Though doing so has no impact on your stats, I had fun making a pretty ridiculous looking hero with purple skin and spikey blue anime hair. The music is no slouch either, and it’s a fun mix of dread inducing Gothic tunes. Things really ramp up during boss fights, which is fitting given how harrowing those are. Bosses can wipe the floor with you, and so far both the ones I’ve defeated love to mess with you by throwing useless cards into your deck. Overall, the style of Doors of Insanity is one of its strongest points. 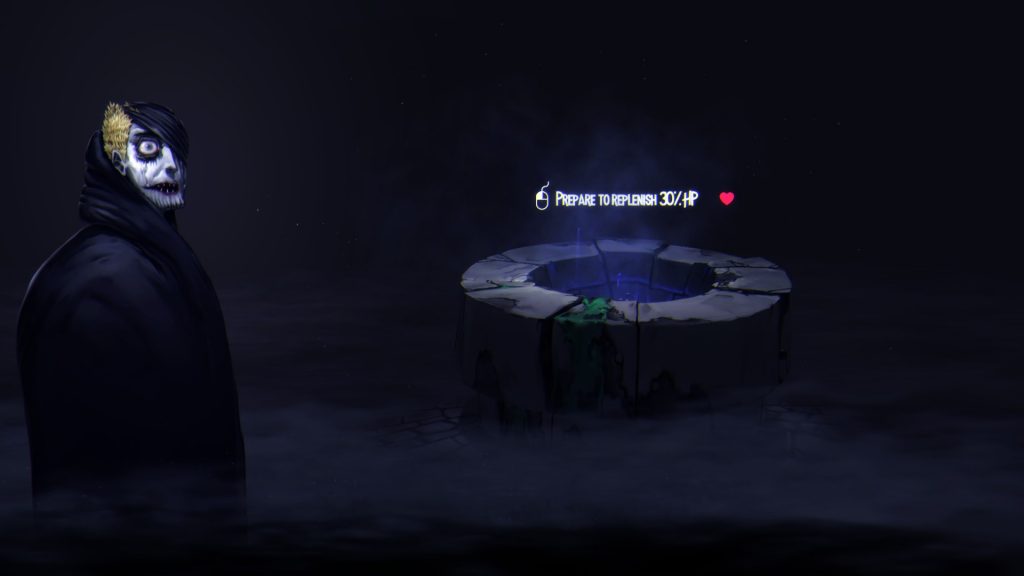 Now, while I enjoyed the hours I’ve spent with the game so far, it’s not perfect. Doors of Insanity is still in Early Access, and sometimes it shows. I’ve had to deal with a bunch of glitches in my time with the game. The first time I was defeated, instead of quitting back to the start screen, the game got stuck. My corpse just sat there, with the enemy attacking it every turn as I was prompted to select cards. A less dramatic but still annoying glitch was sometimes when I selected a door, it wouldn’t open up. This forced me to keep clicking until something happened, but more often I had to quit and start the game again to force it to work. One glitch that happened often during combat involved the combat preview. Normally scrolling over the enemies shows what action they’re going to take. But many times that didn’t happen, and it was seemingly random. I would even sometimes pick a card to play, only for nothing to happen.

Besides these glitches, there’s something I want to address – Doors of Insanity is pretty crude. Now, I say that as a fan of The Binding of Isaac, but in fairness, I was often in the dark about the horrible things that game was referencing. Regardless, there’s some content here that’s pretty gross and immature. One time I was battling some decrepit looking hobos, who were dealing very little damage to me. Suddenly they vomited green bile all over me, utterly destroying my character. I also didn’t find it funny when I found an artifact called the Eye of Sorros, which I have to assume is referencing some of the insane conspiracy theories about George Soros. But perhaps the most offensive was a random event I encountered. It was riffing on the Sleeping Beauty fable. You come across a gorgeous woman who isn’t wearing any clothes, prone in a bed. The game gives you an option to leave or see what happens. I was curious, so I progressed, only to get rewarded with a Burning Pickle card, which seems to indicate my character raped the poor woman. Though I can tolerate some crudeness, I don’t think rape is ever acceptable. Suffice to say, that was the only time I interacted with that event. 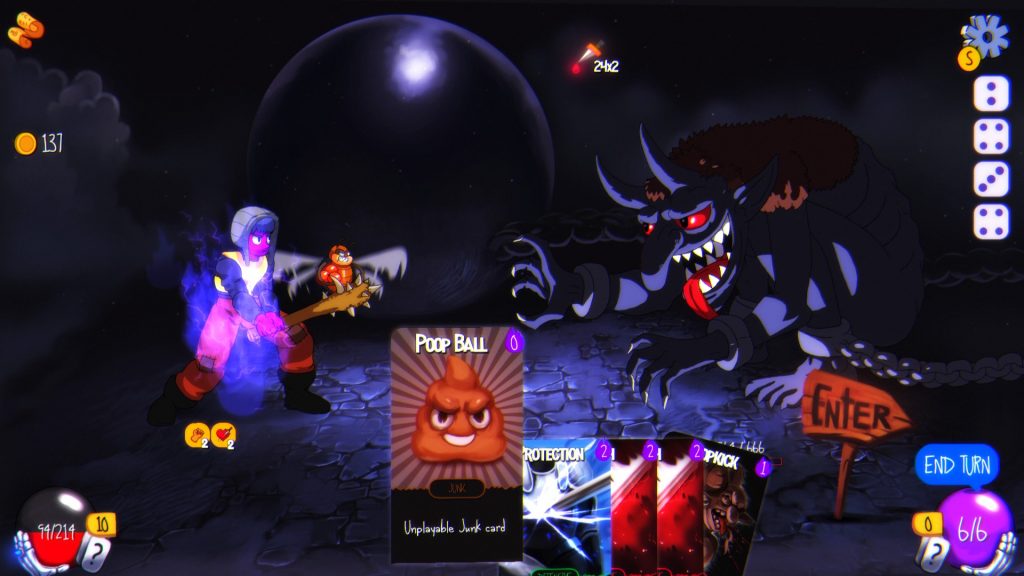 None of the issues above are necessarily deal breaking. It’s clear developer OneShark loves to poke fun at and parody popular culture and norms. But I think Doors of Insanity would be better off if they avoided the more disgusting tropes available to them. Thankfully, the game itself is very solid so far, and plays well when glitches aren’t occurring. I think this could be a great rogue game if they iron out the problems and better integrate systems like the dice. If you enjoy a challenge and don’t mind some crudeness, this is a game to keep on your radar.