Kickin’ Into Gear (Although I’m Not Sure Which) 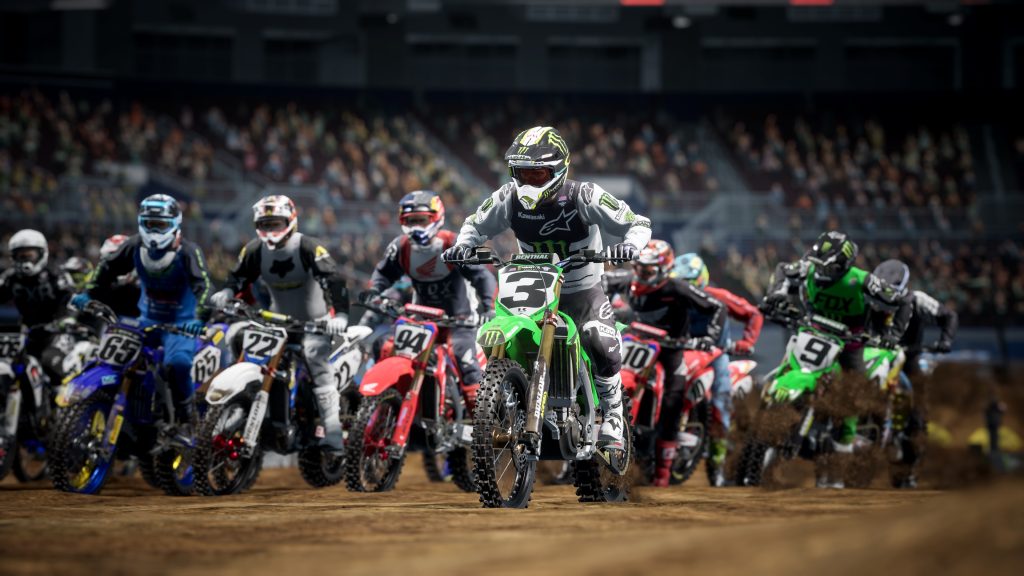 At this point, it’s not a secret that I don’t really care much for any racing game attempting to emulate, well, actual, legitimate racing—and that goes double for any games whose vehicles of choice are either monster trucks or some type of motorized bike. So, I’ll be upfront, my time spent previewing Monster Energy Supercross – The Official Videogame 4 wasn’t my favorite. I’m not telling you this to kick off some kind of snarky, satirical piece, though. I’m just letting you know that games like this are a bit out of my wheelhouse—no pun intended—and also that I’m being genuine when I say that I still think that it’s pretty good.

Did I like this game? No, not really. But a game isn’t immediately good or bad just because I—or anyone else—likes or dislikes it (contrary to what some may have you believe!). So, while I didn’t necessarily have a blast with my preview this time around, I was able to appreciate, at least to the best of my ability—which, given my overall lack of supercross knowledge, is fairly limited—everything that went into this game, and came out on the other side able to say that I had at least a little bit of fun.

It’s Gonna Be a Bumpy Ride! 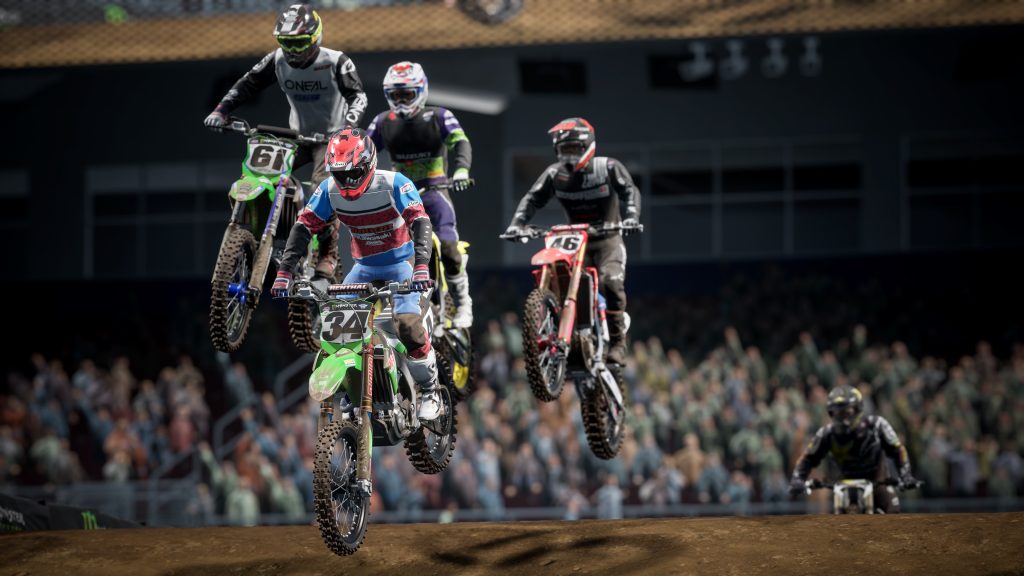 You’ve got to make the most of everything that each course throws at you!

Like many of these games—or, at least, the ones that I’ve played—Monster Energy Supercross 4 seems to be very formulaic in its initial setup, allowing for players to choose between several different modes. Naturally, the main attraction in this game is the campaign mode. Despite not being the biggest fan of games like this, I actually kind of like campaign modes in racing games—especially if you can upgrade your vehicle. And, while I can assure you that this game does, in fact, have a campaign mode, I wasn’t able to access it, so we’re just going to have to look at how the game plays based on a number of individual races instead.

To that end, Monster Energy Supercross 4 ended up being exactly what I thought it would be. It’s a standard supercross game with an emphasis on hyper-realism, meaning that you’ve got to focus on more than just the basics of racing. Generally speaking, this boils down to weight distribution and gear shifting. Given the many bumps, hills, and sharp turns strewn about each course, Monster Energy Supercross 4 essentially asks that you’re constantly making some kind of change to how fast you’re going or the direction in which you’re leaning. 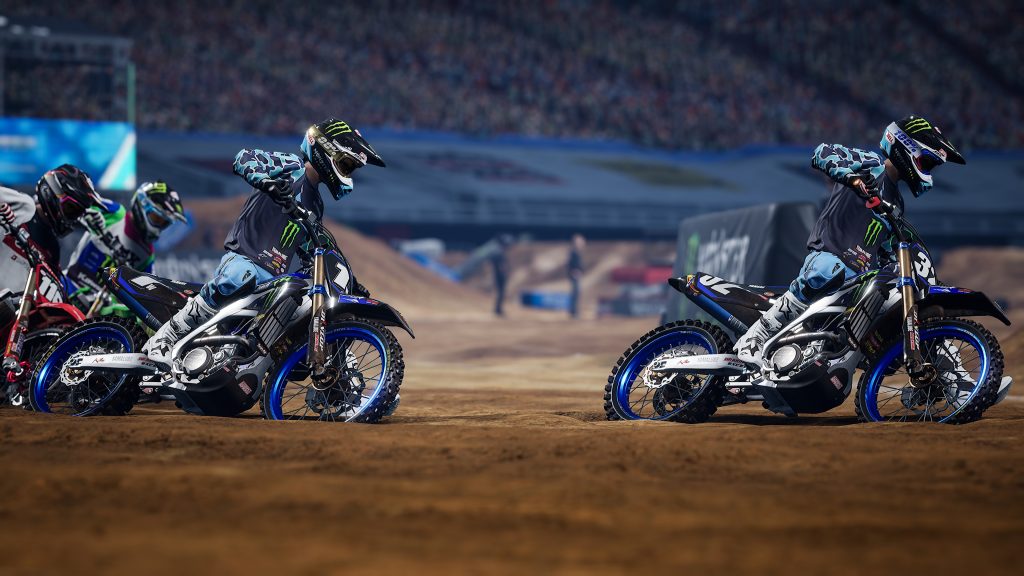 Proper racing technique is tricky to pull off, but it’s a satisfying feeling once you do!

From a technical standpoint, this seemed to work really well. The controls were very responsive, and I not once did I ever feel like my character was doing something that I didn’t ask them to do. Unfortunately, this game also comes with a massive learning curve, and basically explains nothing. So, unless you’re a) familiar with this series, b) familiar with supercross, or c) willing to go through a lot of trial and error, then you’re in for a rude awakening, dear reader.

There is one caveat when it comes to this game’s tendency to ground itself in realism—the fact that it lets the player travel back in time. No, that’s not a joke; you can really do that. If you ever find yourself doing something like botching a drift, getting bumped off the road by another racer, or landing head-first into the dirt from a jump, you’re able to rewind time by up to three seconds, giving you a precious second attempt at getting things right. This, of course, isn’t something you can freely use, however. Rewinding time—regardless of how long you do it for—will drain your rewind meter entirely, meaning you’ll have to wait until it fills all the way back up until you can use it again. Honestly, this feature really goes against everything else that this game seems to stand for. But, as someone who found myself making plenty of mistakes—especially in the beginning—I was incredibly happy that it was there. 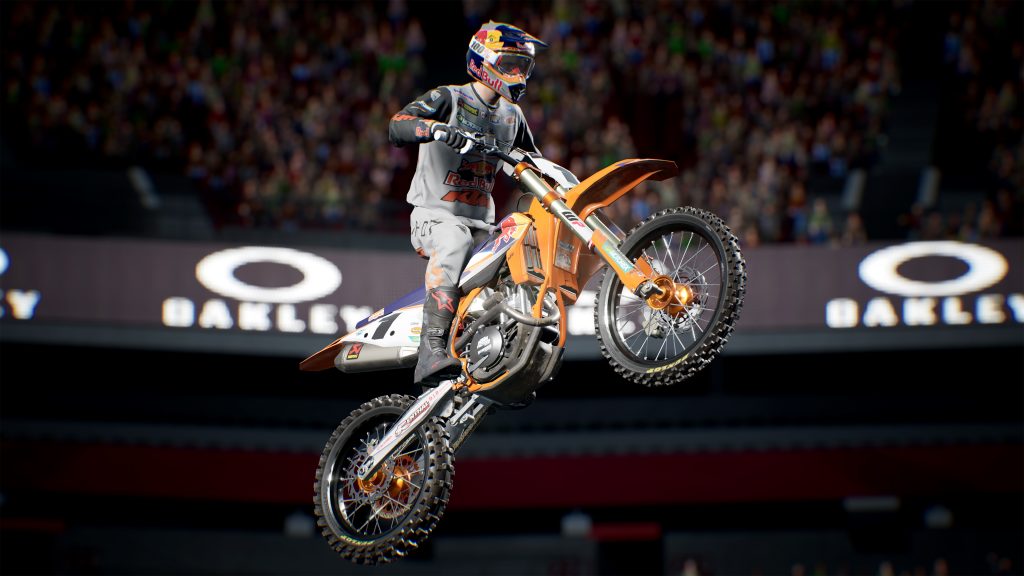 Is… is that logo allowed in this game?

Aside from the standard single-race, time attack, and championship modes, this build of Monster Energy Supercross 4 also came with a few novelties in the form of a course creator and compound mode. The course creator should speak for itself—and it’s actually pretty fun to mess around with (although I wasn’t able to make anything competent—but the compound mode was probably my favorite feature in this entire game, simply because it’s a free-roam mode.

I like compound modes for two reasons. The first, and most obvious reason is that it’s fun to just drive around. This game really does have some impressive controls, and I, not being great at the game, had more fun experiencing them when I didn’t have to worry about trying to out-maneuver 21 other racers. The second reason I liked this so much was that it actually gave me a chance to get better. While a lot of compound mode featured open spaces, there was a part of it built more like an actual track, which let me get the basics down—something that the game itself doesn’t really let you do straight off the bat. It takes some practice to not be flat-out horrible at this game, and, thanks to the ability to freely drive around in this portion of the game, I was finally able to get past that barrier—something which made things much more enjoyable in the end.

I may not have been able to access everything during my time with Monster Energy Supercross – The Official Videogame 4, but I can still, fairly confidently, say that my opinion of it right now wouldn’t change much even if that hadn’t been the case. Based on what I can tell, it seems to be a legitimately well-built game that should appeal to people who are fans of dirt bike racing games or actual dirt bike racing, but I don’t think that it’ll really go much further than that. And you know what? That’s perfectly fine.